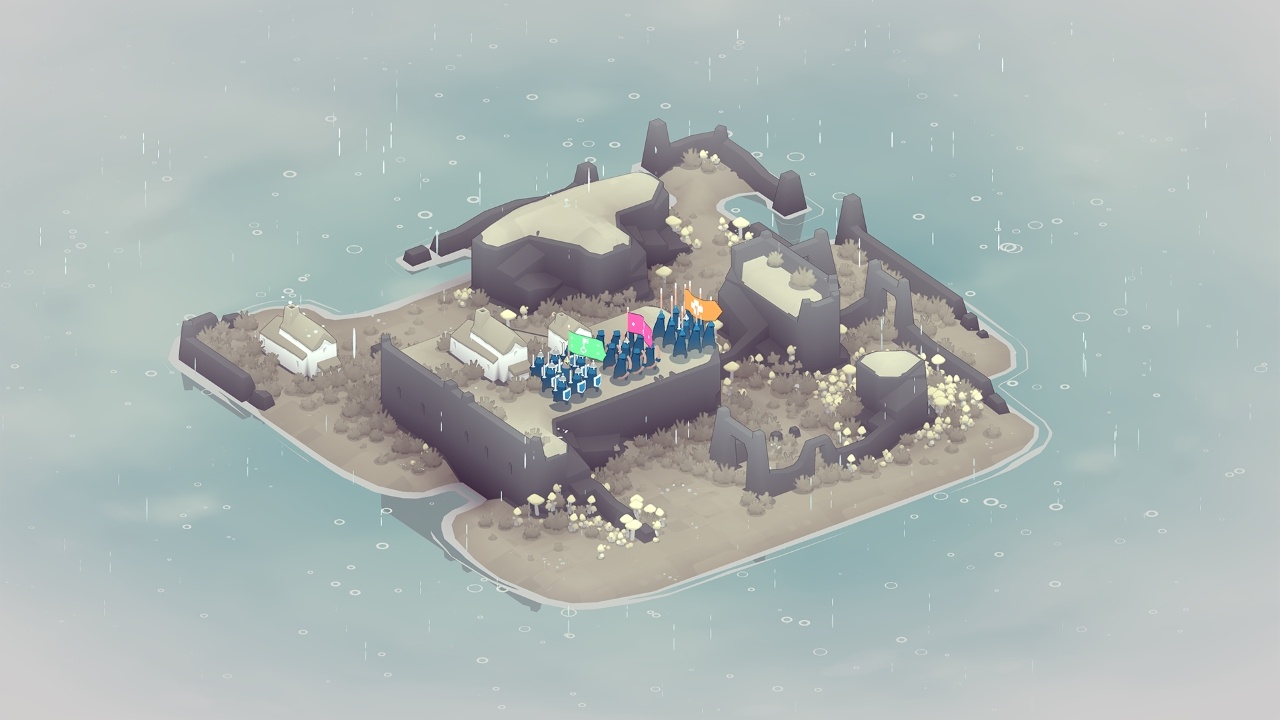 The Nintendo Switch is the perfect platform for indie games and strategy games to thrive. I’ve lost many nights testing my patience, weighing my decisions, and blasting enemies apart with the game Into the Breach again or busting up some bad guys in Marvel Ultimate Alliance 3. It’s the convenience of the Switch that makes strategy games and Metroidvania type of games dominate this platform. Bad North reminds players why strategy games are also a staple in the gaming genre.

Bad North reminds me of Flash-based tower defense games, but broken down to its elements. Flash games evoke nostalgia to players and in this case it works because it makes simplicity its strength. What is a strategy game in its basics? You are on offense and attack others stabbing or flinging things at you. Or you build up your units and mount a defense to wait for the enemy to overwhelm your forces. With every island that I defended against the Viking enemies, the stakes increased as the thought of permadeath laughs at me. This game takes the DNA of great strategy games, blends it with a unique art style, and throws you in command of armies that are seeking to find a home. Despite the terror of possibly losing any of my armies, I improved my armies’ abilities to get back at their Viking attackers.

The game begins with an overview map. Instead of being assigned giant armies of numerous soldiers, you are given a handful of warriors to control. I am looking at about five to 6 soldiers for each group. Each soldier is either slashing their viking adversaries with basic swords and shields or striking down landing parties with arrows. Throughout each island, I am actively controlling each group to defend points as the vikings approach. As soon as I choose which area to defend or attack, I let the groups automate the attacking process.

Islands increase in difficulty as you progress through the game. With each island that I conquered, I gained new squad leaders, providing attack or ability bonuses against the endless viking onslaught. I also scowled at the thought of losing my soldiers at careless mistakes, such as not reinforcing an area or letting a group get overwhelmed. 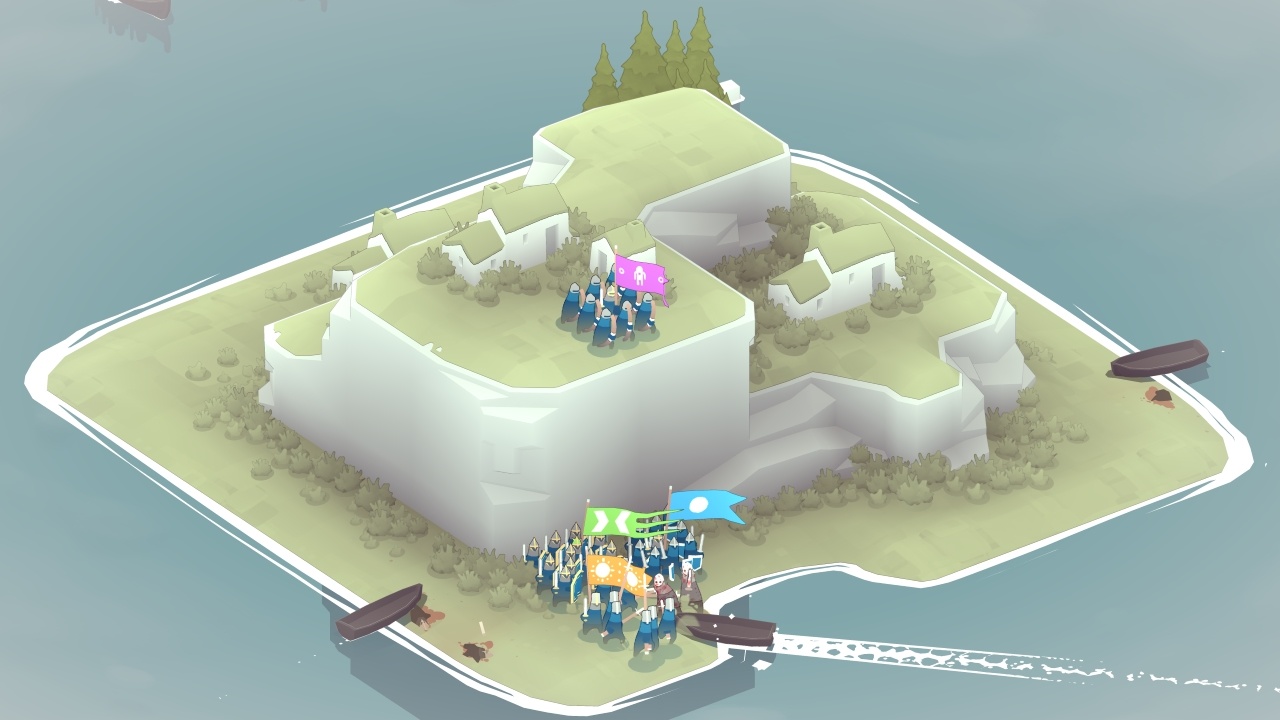 Throughout this game, the soldier groups have a couple of objectives: Destroy all the enemies, defend the buildings, and minimize casualties that cause permadeath. Juggling all three of these objectives made me think on my feet and helped me figure out what I wanted to focus on what specialities my troops should have.

The specialities for each soldier stick to basics, but they make the difference when you need them. For example, I levelled up my basic swordsman to veteran level fighters and they were able to take more hits against attackers. I levelled up a branching skill which allowed them to drop from the cliffs, which not only looks awesome as they are raining chaos upon their viking invaders, but it also does at least double the damage against them.

Controlling my archers is a constant mobile strategy. I say this because I have positioned my archers at great kill zones to wipe out the invading force, but I would need to move them quickly or a vulnerable area would get scorched. Luckily, you are able to replenish your forces with a little bit of time. This caused me to juggle around my groups to defend actively, buying time for the recovering group to get back to full strength.

The key to playing this game is to know your strengths and weaknesses. The core unit types revolve around a rock-paper-scissors formula, but it is something that works to my advantage. I know that if I positioned my pike man near a choke point blocking the landing boats of vikings, they will create a death porcupine formation that destroys them. I increased their value by levelling up their ability to do a pike charge. Though it is a charge base ability, if used correctly it can dispose of a secondary squad of attackers.  Their only weakness was they aren’t able to defend themselves as they are moving, but as a stationary defender, they excel at it.

Tying into the levelling up system is the rewards I got for completing each island. Each island increased with more attackers. The more difficult islands I completed, the more coins I gained that could be used to level up abilities for each soldier group or helping them specialize in their weapons. The purchase screen was also where I was able to look at any items I grabbed after a battle. One of the most useful items I acquired was an item that allowed me to revive a fallen leader from battle. Permadeath loomed over my groups the entire venture into each area, but as long as I was actively planning where to move each time, I readied my soldiers to fight. 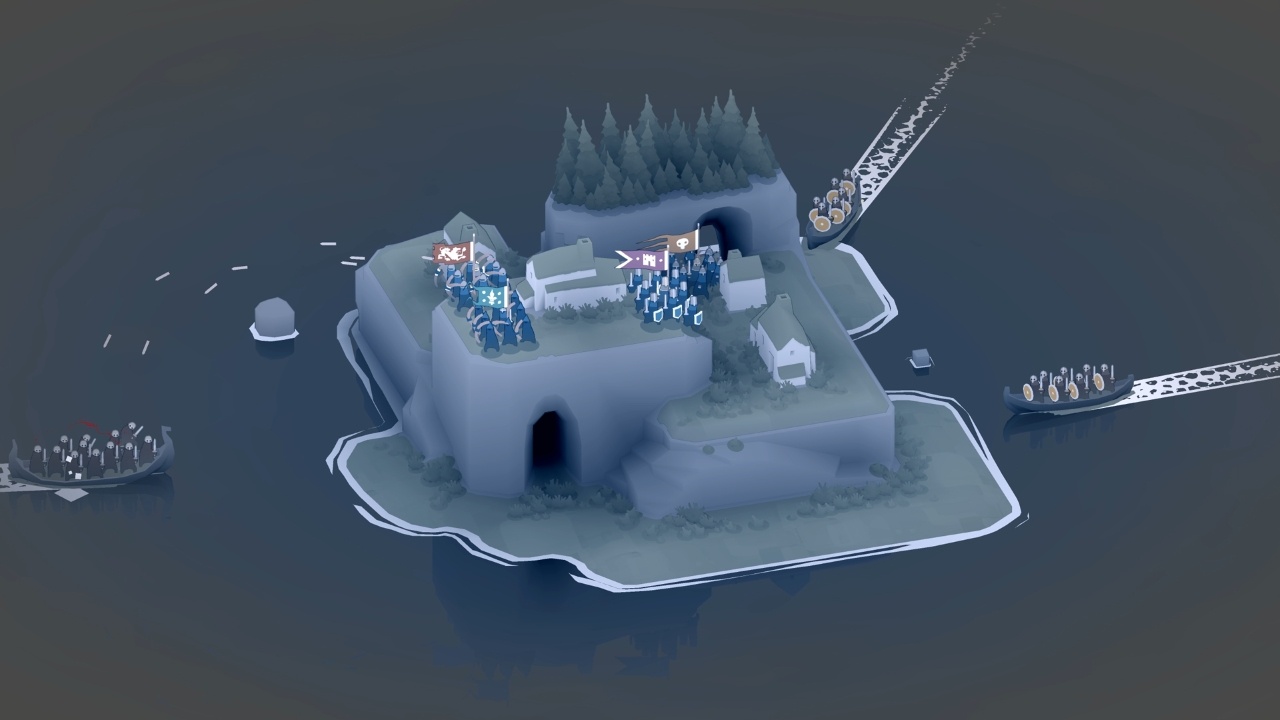 I booted up this game expecting an intricate story of conquest, betrayal, love, and intrigue. I continued each fight accepting that there is no direct story, other than moving from island to island defending against Viking attackers. I am intrigued why the creators chose to step away from a story-based game and focused on game play instead. I would have enjoyed a stronger story line to this game, but the goal of improving my squads to do better kept me drawn into the game.

Bad North tests my patience. The majority of my play through went well, despite having to restart a level sometimes to not lose a group leader. The most frustrating thing was fighting the larger vikings, which seemed practically invincible apart from a nice powered up ground pound from my war hammer. If I didn’t have this ability, all of my groups would have been slaughtered. I had to go through trial and error to discover this, but it would have been helpful if there was another place to get tips other than the ones that flash on the screen in between loading different islands.

At the value this game is placed at, you will get hours of game play, depending on how fast you progress through the game. Bad North doesn’t apologize for punishing you for your mistakes, but you will pride yourself when you conquer each island. I would recommend this game to fans of the rogue like genre, but with a strategy twist. It’s simple to pick up and the only thing that held it back was a stronger story plot other than attacking Vikings and building your soldiers up. I personally kept this game on my radar in case there was a sale, but this is a good time waster if you’re on a trip or having a lazy weekend.

Bad North reminds players why strategy games are a staple in the gaming genre.