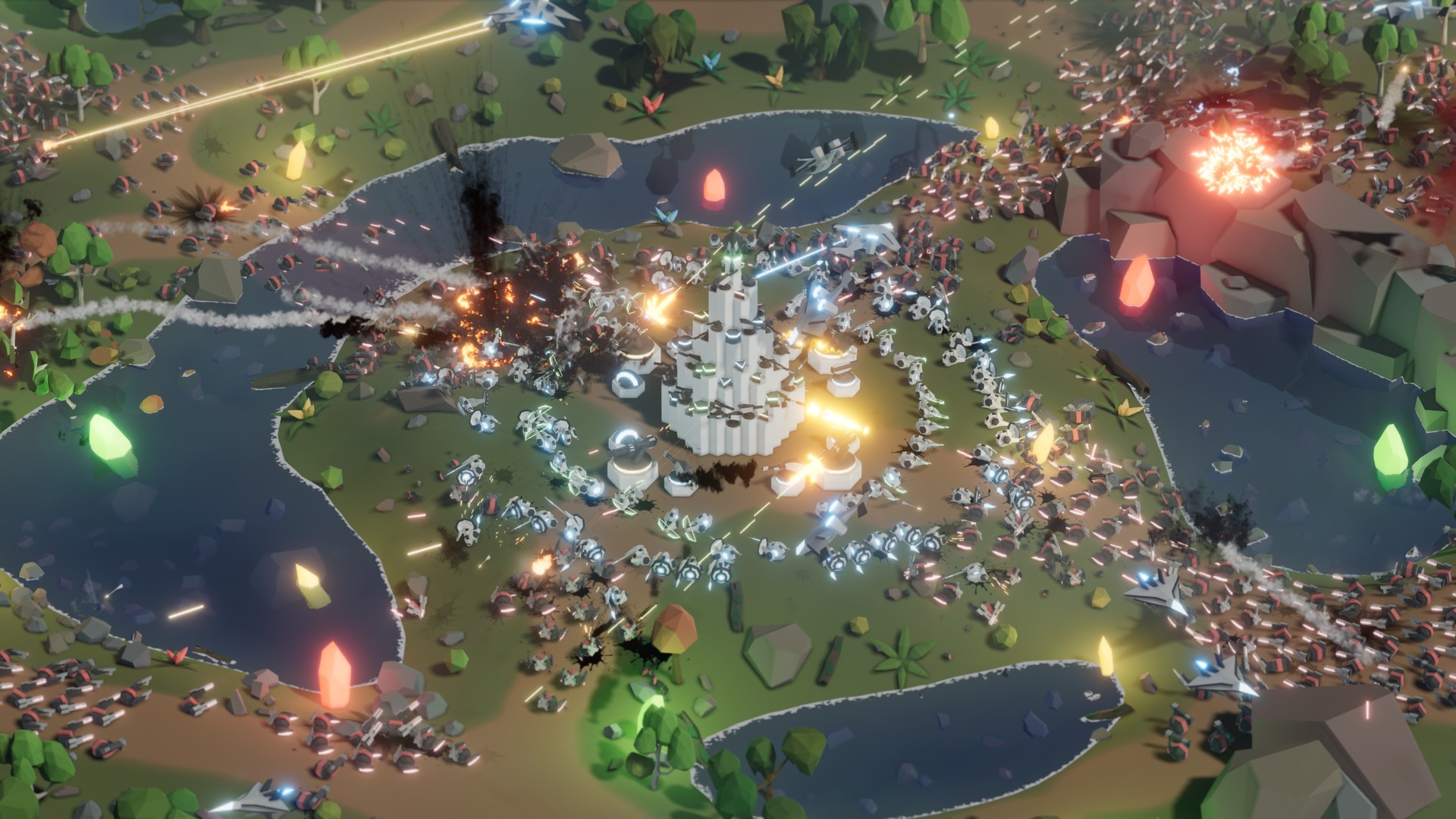 Taur came out of the blue for me, and being the fan of Tower Defense games that I am, I was immediately drawn to it thanks to its unique design. Taur might not directly describe itself as one, in fact, according to the developers it’s “an action-strategy sci-fi game” first and foremost, but it does draw inspiration from the Tower Defense genre. With that said, don’t walk away immediately if you tend to avoid these games, as Taur does provide a very specific experience which I don’t think I have ever witnessed before.

Taur takes place in Taurea, home of your friendly Taurean droids, which is being invaded by the Imperion, a galaxy-spanning militaristic droid empire. Despite possessing greatly advanced weapons technologies, the Taureans are inexperienced in the art of war. To that end, they grant you, a “primitive warmongering organic”, the command of a Taur battlestation, in the hopes that your experience might tip the odds in their favour and save them from utter annihilation. And that’s pretty much it as far as the story goes. This context is provided pretty much as soon as you jump into the game, and that’s it. A touching or thrilling story is not something that you’ll find here, if that wasn’t obvious by now, as Taur is all about its gameplay.

Taur’s gameplay can be divided into two segments, a strategic layer and an action-packed mixture of Tower Defense and shooting. The latter is where you’ll spend most of your time, as during each mission you control the Prime Cannon of your Taur, as you resort to several unlockable primary and secondary weapons, and abilities, to lay waste to the endless waves of enemy droids. Likewise, you also get to build up your defences around your Taur, making it increasingly stronger as days pass and the enemy army grows ever bolder.

The strategic element of Taur intertwines with the actual combat, as you have to decide what kind of defences you’ll set up within an extremely constrained area around your Taur. These defences can be placed in a series of fixed spots around your Prime Cannon, and they can either be actual auto-attacking turrets, or they can be command outposts which spawn specific units. There’s a wide variety of defences at your disposal, ranging from spear-wielding and shield-bearing droids that form a shield wall around your Taur, to archers, bombers, gunships, artillery cannons, anti-air turrets, and miniguns. Each of these fulfils a very specific role, so it’s better if you find a balanced lineup, other than just using a couple of types. Taur certainly doesn’t have a “one tower to rule them all”, as your survival depends on thoughtful balance and planning ahead. 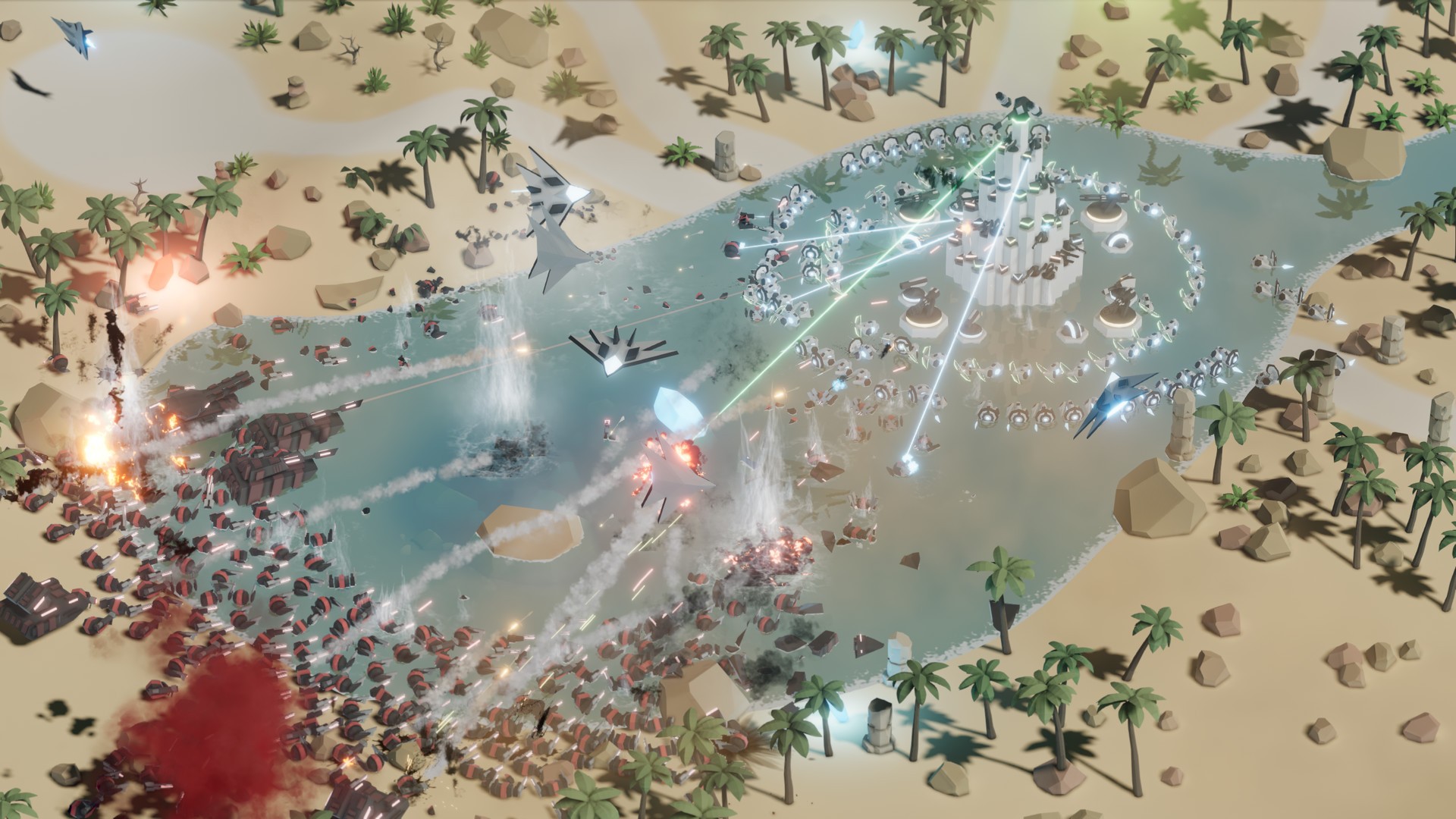 As far as your Prime Cannon weapons go, while there are 8 of them (4 primaries and 4 secondaries), I feel like there is one primary weapon which just happens to be better than all the others. You see, while there are things such as a railgun and a dual minigun, there’s also the Disintegrator, which is some sort of beam laser which feels superior over the other options simply due to the fact that you don’t need to reload it, as it automatically recharges itself when you’re not using it. This feels even more powerful in action because you can easily tap it or use it in quick bursts and it will never run out of energy.

Now, in order to build up your battlestation and upgrade it to its full glory, you need to acquire resources not only to build things but also to research them and upgrade them. Each mission in Taur represents a day in the game, and in each day the Imperion will attack up to three different zones in the planet, but you can only choose to defend one of them. Each of these zones will grant you different resources, should you successfully defend it, but the ones you didn’t choose are deemed as abandoned, thus giving the Imperion some foothold on Taurea. If the Imperion’s foothold reaches 100%, it’s game over, but for me, this seems like an unlikely scenario, as you constantly seem to keep more foothold than you ever lose by completing certain missions.

One thing that’s great about Taur is that missions usually take just a couple of minutes to complete, depending on the amount and type of enemy forces that are invading. There are different types of missions, like air raids, sieges with only enemy armoured units, or just straight up invasions with all sorts of enemies thrown into the mix. This makes Taur a perfect game for when you have a little bit of time to kill or when you’re on a break, as you can easily play a fair amount of missions in a short amount of time.

This entire gameplay loop of doing missions, getting resources, unlocking something in the research tree, building more defences, rinse and repeat, goes on for what might feel like an eternity, and while some might find it repetitive, I have to admit that I enjoyed this loop way too much. However, I do have to say that more map variety would’ve been nice. Once you reach the 50th day of the invasion, the final boss finally shows up, and it will most likely destroy you without breaking a sweat. After that, he will then show up every 25 days going forward and once you eventually defeat it, you win the game. There is however the choice to keep on going forever after defeating the boss, as the game unlocks its endless mode. 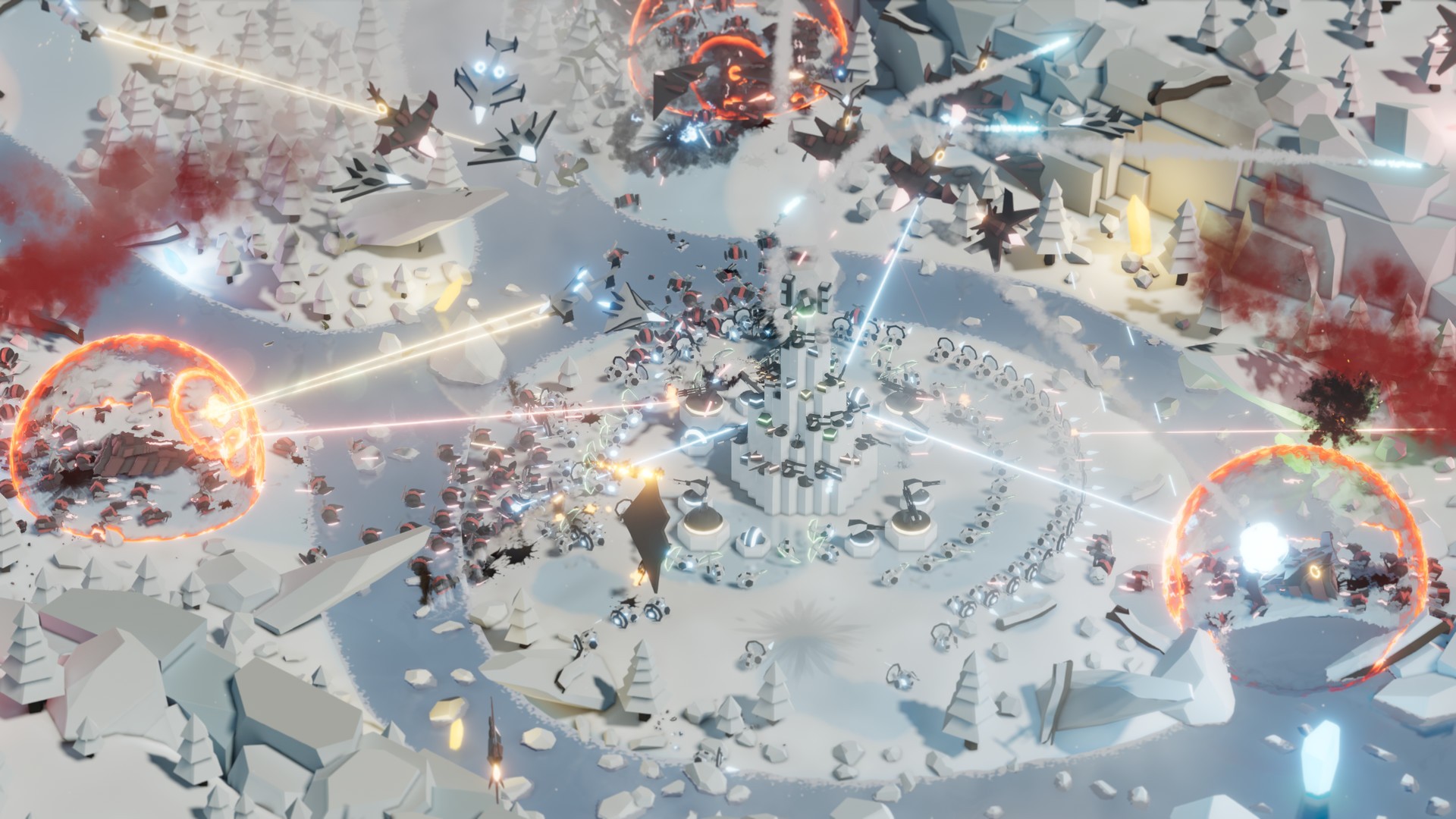 Now, for the things that really bug me about this game. One thing that I immediately noticed as soon as I started the game for the first time was the obscene amount of mouse acceleration. The worst thing is, there is no option to turn it off. I honestly can’t think why such a thing is enabled in a game like this, and while messing with the mouse sensitivity options and mouse DPI helped alleviate the issue a bit, moving the cursor around still feels way too clunky. Furthermore, from what I can tell, the game doesn’t even have a place where you can check the controls, so if you happen to miss them during the initial tutorial snippets or if you simply forget them, then you’ll have to ask someone or search the forums. I sincerely hope that this gets fixed in the future, otherwise, I can see a lot of people avoiding this title.

On the other hand, while I don’t really have any complaints in regards to how the game sounds, unfortunately, the game does suffer from a lack of any actual music in the background. Most of the time, everything you’ll hear on the background is just the hissing of the wind, nothing else to go along with all the raging warfare. The only time the game does put on a musical performance is during the boss fights. Pretty disappointing. In contrast to the audio, the low poly art style suits the game perfectly, and the huge battles later in the campaign look astounding with all the effects and explosions going on. However, this brings up a complaint that I have, and that is that it can get really hard to keep track of where you’re aiming at, as the white crosshair can be hard to track a lot of times, especially if you’re playing in a snow map.

If there is one thing that is really exceptional about Taur, it is the moments when there is all-out warfare raging on, with all your turrets and units firing at the swarming enemy waves, with the battlefield getting constantly bombarded and projectiles flying everywhere. It’s quite a spectacle. However, this spectacle is only visual as in practical terms, there isn’t much challenge to the game. I certainly wasn’t expecting Taur to be an easy game. I’m not sure if I just started off with the right upgrades and unlocks, or if I just got lucky, but throughout the entire game I never had any trouble keeping my Taur alive, and I never lost a single mission apart from the boss encounters on day 50 and 75. Furthermore, the game is quite forgiving, as any units that die during a mission will respawn on the next mission at no extra cost, and if one of your structures is destroyed, you will be refunded all the resources it takes to build it. The point I’m trying to make is that if you’re looking for a challenge, you probably won’t find it here.

As it stands, Taur feels fresh and provides an interesting approach to the Tower Defense genre, but after 8 hours or so, as you near the end of your campaign, things can start to feel dull and uninteresting, especially once you’ve seen all the different upgrades, units, and towers that your Taur has to offer. In any case, if by the end of the campaign you’re still enjoying yourself, you can keep on playing forever. I certainly enjoyed pretty much most of my time with Taur, and I recommend it to fans of the genre, as long as you don’t expect this to be a genre-defining turning point.

Taur feels fresh and provides an interesting approach to the Tower Defense genre, but after 8 hours or so, as you near the end of your campaign, things can start to feel dull and uninteresting, especially once you’ve seen all the different upgrades, units, and towers that your Taur has to offer.