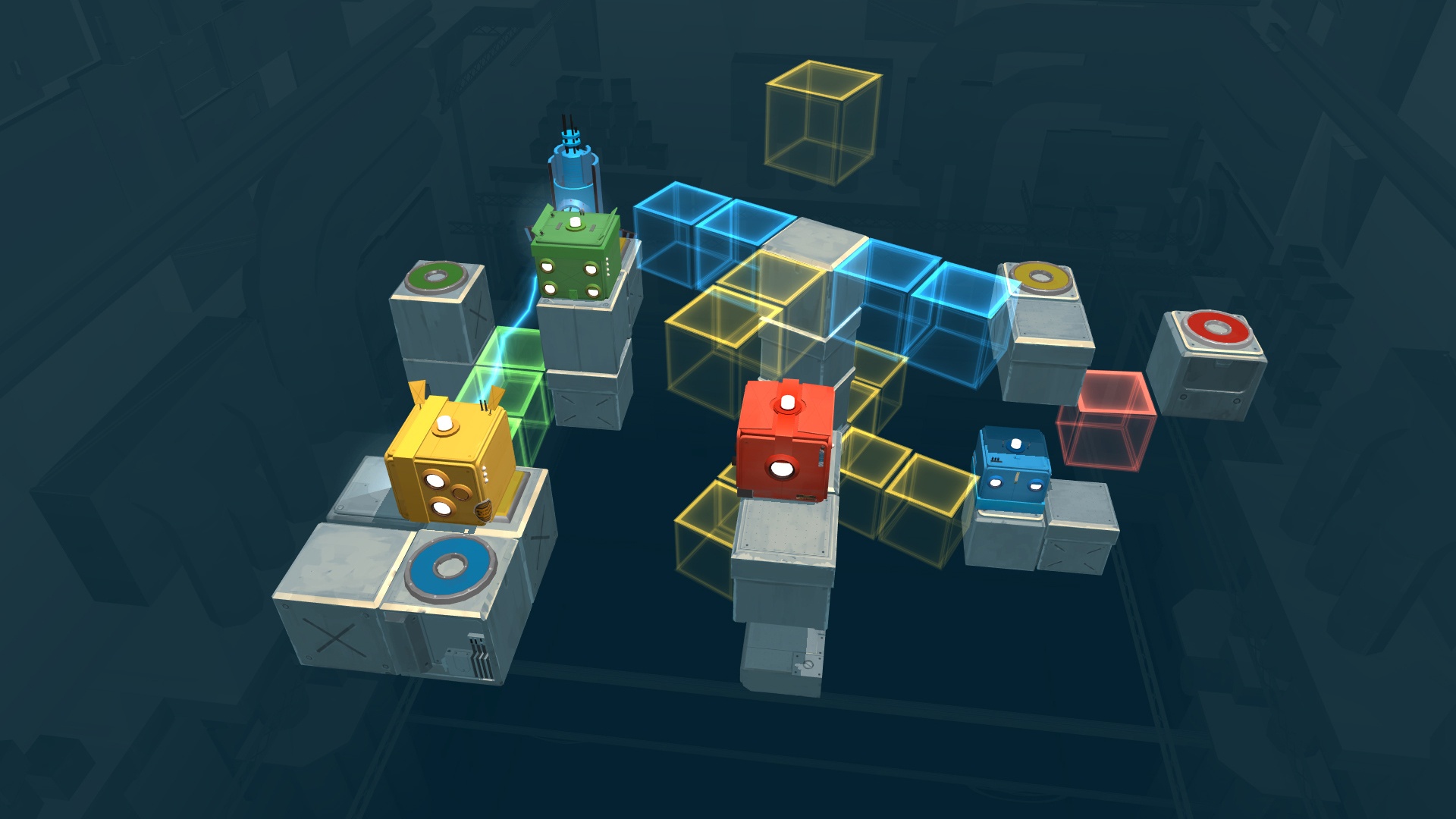 When the Internet was in its infancy, multiplayer games were experienced in your friends’ houses, all huddled around a 20 inch TV vying for the best position to be able to see the action. Long gone are those days, now a mere flick of a button, and you are connected to every corner of the globe. Friends at your beck and call, but yet nothing can replicate that “couch” Co-Op experience. There are a handful of developers still keeping this tradition alive, and one of them is SMG studio, they have created a fun yet challenging puzzle game that will allow you to complete it solo, or with a friend whilst sharing the same couch. Death Squared will have you racking your brain trying to solve puzzles involving numerous colourful squares, with simplistic yet attractive graphics, and a comical audio narration, this title will have you; frustrated, laughing, annoyed, but more importantly coming back for more.

The action revolves around David, who is an Omnicorp testing technician. He is running tests on Artificial Intelligence, and is dutifully observed by a supervising computer programme called IRIS. The tests themselves are depicted by a maze like world, and played out by a red and a blue coloured cube. The aim of each of the tasks is to navigate the stage, avoiding numerous; holes, spikes and lasers. Each level is completed once you’ve moved the cubes to their associated coloured circle, success is quite literally measured by placing a square peg into a round hole. During this process, you will die many times. The death toll is recorded, but it does not impact your ability to proceed, it’s more personal pride to complete each level without meeting a gruesome end.

The gameplay is split into 2 categories; Story and Party mode. The story mode is the solo play section, and consists of 80 levels that have a gradually increasing difficulty, you will encounter; hidden spikes, lasers that will destroy you instantly, and a number of other deadly traps. To add an element of replayability the developers added some collectibles in a selected number of levels, frustratingly you are not advised which have the collectibles in, so when it’s not obvious the secret item is available it can be a bit pot luck if you go searching for it. The party mode is great fun, it has 40 stages, which require you and upto 3 other players to work together to move 4 cubes to their end goals. The philosophy surrounding the game mechanics is exactly the same as the Story mode, but depending on your gaming partners the tasks will be considerably easier, or much harder, and therefore much more frustrating. Think of Monopoly on Christmas day and then multiply it by 10, this is the potential level of fallout that will happen with friends and family. 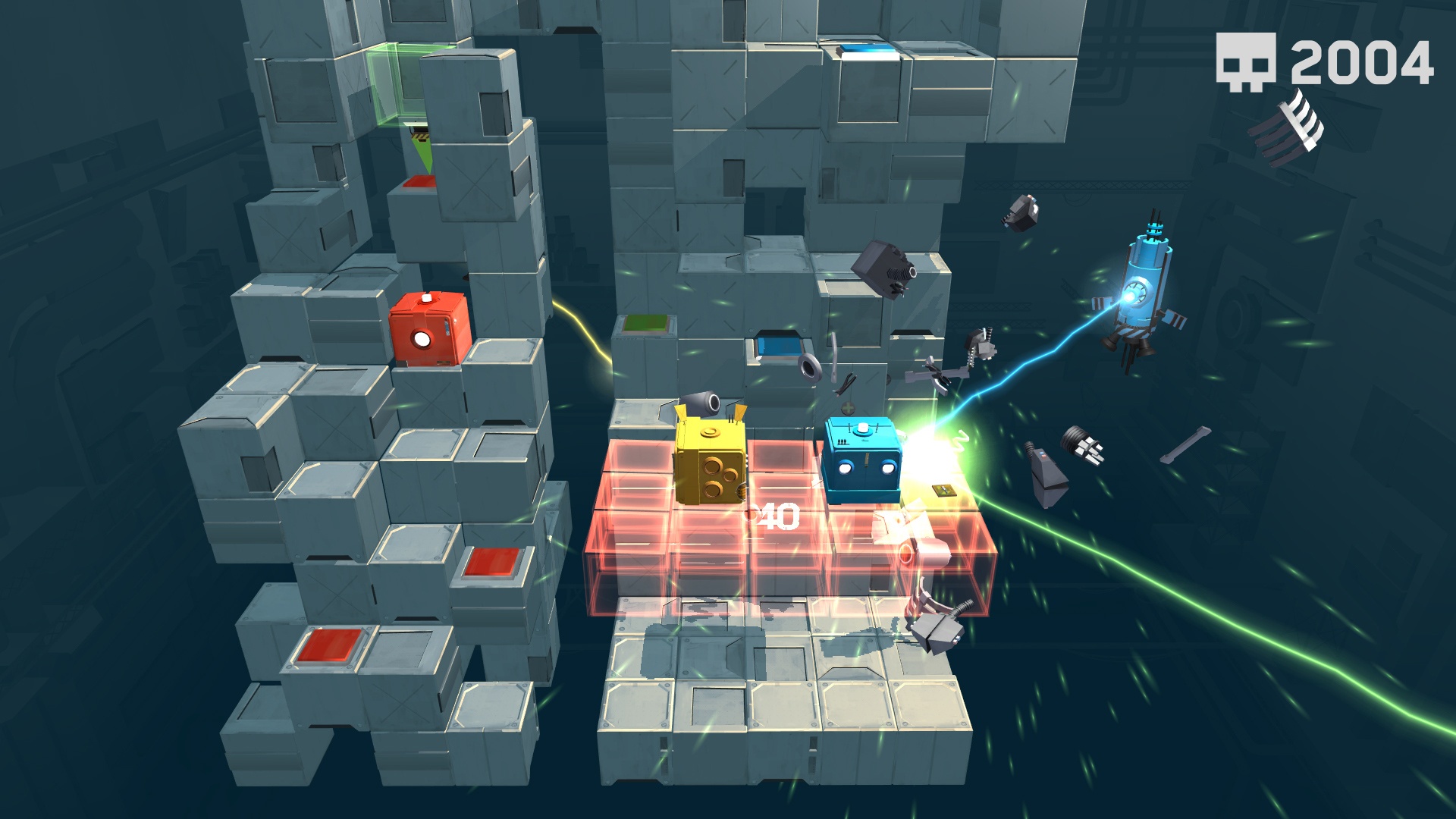 The massive positive of Death Squared is the local Co-Op multiplayer, this is also an area I can’t help but focus on as a drawback. The developers have not allowed online multiplayer to be an additional option, so unfortunately the Party mode is going to be very restrictive for an awful lot of players. I adore that “couch” Co-Op has taken the primary focus in the titles multiplayer efforts, but without any other options, the potential to complete all of the levels, and experience everything that the game has to offer is going to be very unlikely for me, and I fear that this will be the case for a lot of players.

When a lot of the action is finely balanced on a slim walkway, a steady hand, and nerves of steel are required. You’d hope that the control system is simple and accurate. Thank goodness SMG studio has done an amazing job at keeping everything straightforward. Dual analogue mapping has you controlling both cubes with ease, the only thing that will let you down, is your own inability to remember which stick controls which coloured cube. I lost count of the amount of times I sent the poor innocent test subjects to their deaths. Just remember there are plenty more willing applicants where that one came from, still it didn’t stop me from yelping with frustration each time I made a stupid mistake.

With all the puzzle action you may be worried that Death Squared is a little boring, or monotonous. You have absolutely nothing to fear, the continual narration from the unintentional comedy pairing of David and IRIS, will keep you entertained throughout. David’s almost immature and inappropriate comments develop to show an affinity towards his test subjects, he’s kept in check brilliantly by the dry and logical computer brain that is IRIS, her single minded approach making David’s comments even more amusing. Most of the gameplay takes place to the sound effects of the traps and the AI themselves, this near silence adds tension, and works really well within this genre. The only negative I found with the audio was that if you repeated a level a number of times, then you would be treated to the same narration every time, this did get tiresome, especially if you were struggling with one particular stage. 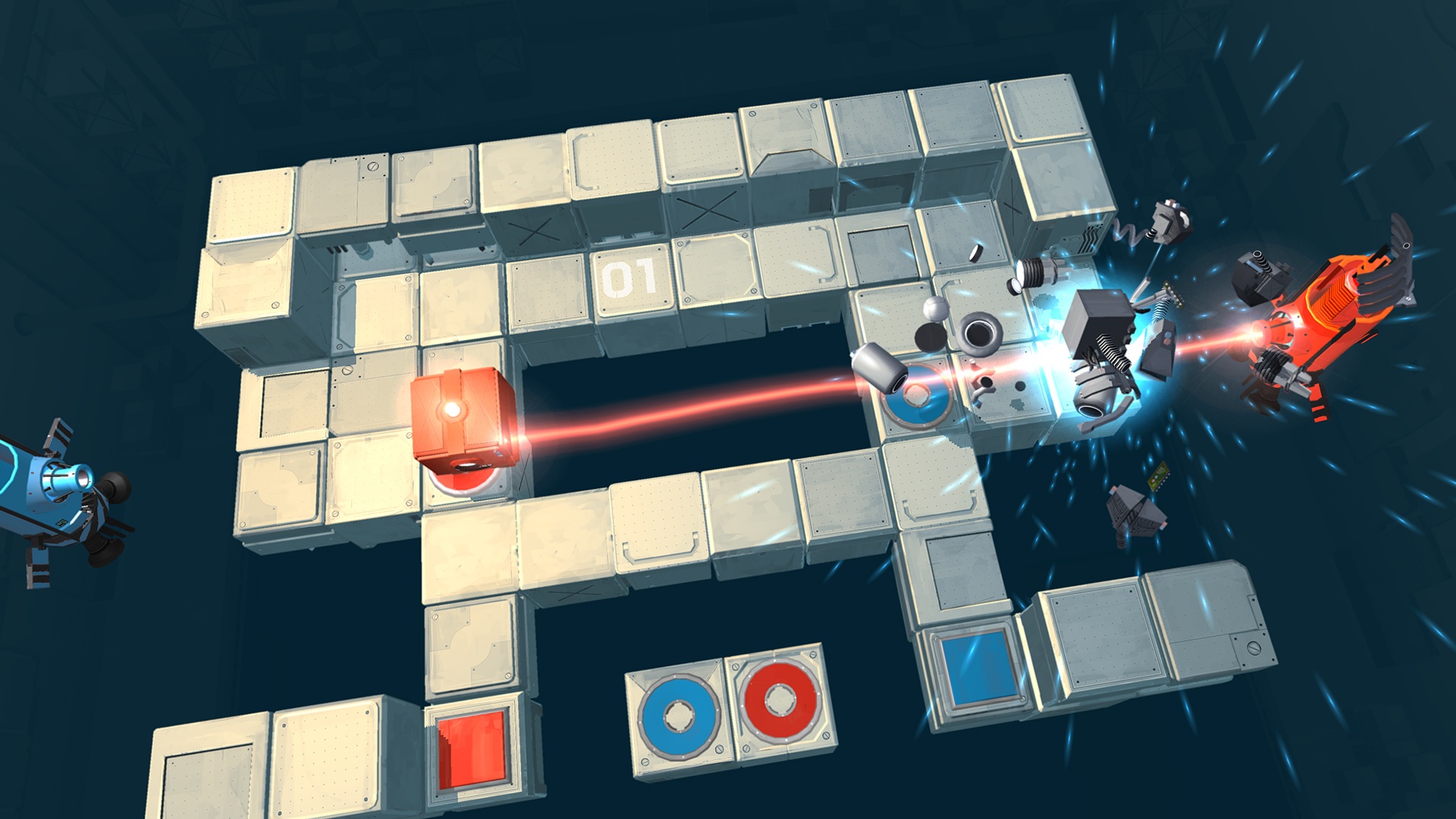 The puzzle genre really doesn’t rely heavily on graphics to make the game a success, so it was a pleasant surprise when I was able to lose myself in a world that is simple, yet crisp and bright. The action is easy to follow for the most part, and all the important aspects are easy to identify. I noticed no graphical glitches at all, and only had one small issue with how the developers approached the perspective in which the game played out. With a fixed camera position, you were unable to view the whole gaming area. This limited your ability to plan, and enforced an element of trial and error. It certainly made it more challenging, perhaps this was what the developers were aiming for.

A great value title that is currently free if you happen to subscribe to Xbox Gamepass. I have sunk around 10 hours into it, and have yet to hunt down all the secret collectibles, or explore most of the party mode. I fully expect this to be around a 25 hour title to complete. A challenging achievement list will have you returning for more, however, other than that I do not see much replay value. Each level pretty much has a set method to complete it, and once you have done that perfectly there is little reason to want to try it again. It’s a shame as a few different methods of completion would have increased the longevity of the game substantially.

A fun and light hearted puzzle game that explores the idea that life, no matter how small, should not be taken for granted. Death Squared reminded me of another puzzle game that I had played recently Thomas was alone; the use of comical narration to drive the story forward, a computer based artificial world to explore, and of course angular protagonists to control, all felt familiar. I loved Thomas was alone, its simplistic approach was amazing, and I believe SMG studio have created an equally brilliant title. For me, all of the elements of the game work, with a few minor frustrations along the way. I found the story charming, the puzzles to be challenging, and just enough hidden items to keep me searching for more. If only the developers had addressed the multiplayer set up in a more inclusive approach, then this game would have been perfect. As it is, I certainly would recommend that you try and run David’s experiment, and see if you can challenge the AI to show the world what they are worth.

A challenging puzzle game, where one small error will lead to massive frustration. Plan every move to perfection, and you will be able to navigate the AI cubes to safety.