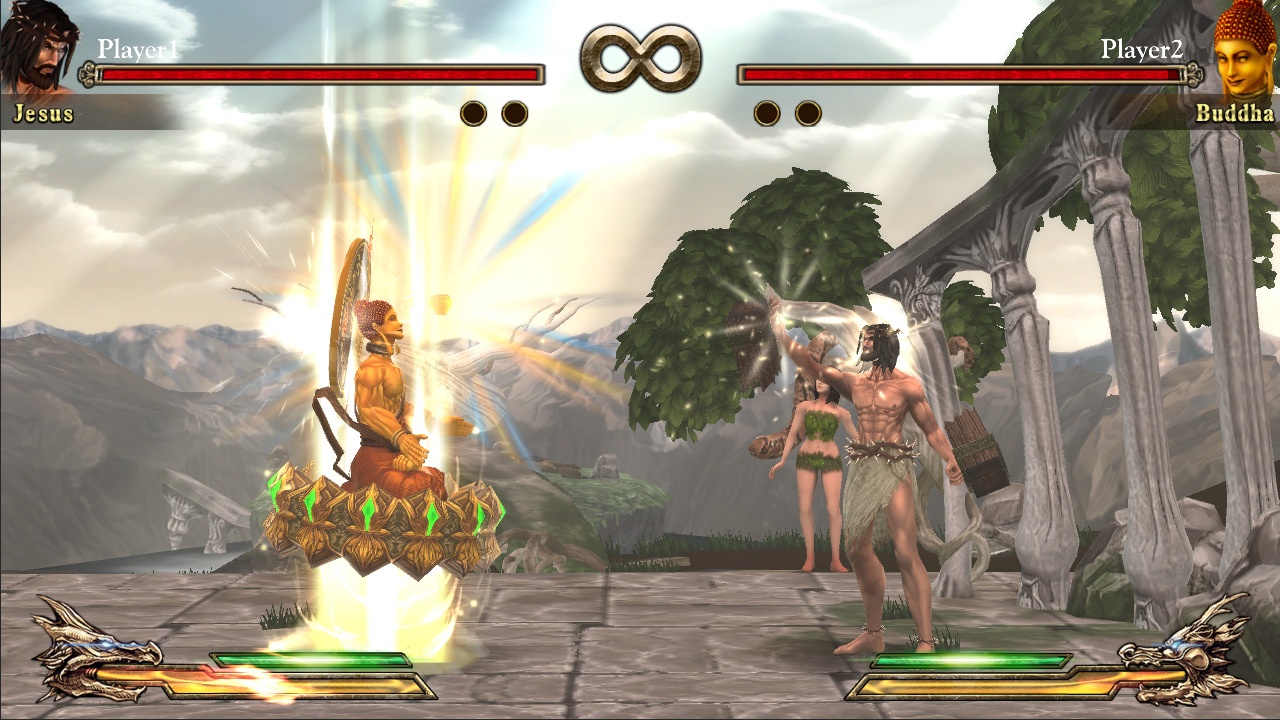 The Internet is a wild and often times upsetting place. Sure, it’s a wonderful invention to allow the archives of information from all around the world to be shared in the blink of an eye, but don’t forget that early adopters decided to troll their friends and loved ones with a picture of a man’s gaping bottom. So it’s sometimes hard to say where a creation rides the line of artistic license and creative integrity versus purposely trying to be a point of attention in a negative way.  But Digital Crafter had to know it was going to stir the pot when they put out their deity rostered fighting game, Fight of Gods, and the game getting banned in Malaysia and Thailand last year was the perfect sort of controversy to get this title selling. The question still remains though: is it actually a decent game?

For those unfamiliar, the idea of Fight of Gods is to have a 2D, mostly bloodless fighting game that pits famous religious icons against each other, from Christian heavyweight Jesus Christ and Jewish prophet Moses to older, more violent mythological beings, like Zeus of Greek fame and Amaterasu, the Shinto All-Mother. The characters enter into the ring to basically see who is the “best” God-like figure, sparring in a best of three match that incorporates melee and ranged attacks, some grappling, and a charging “super” attack that can do a considerable amount of damage. There’s arcade, there’s versus, and there’s some training, and if you need fighting games explained any further I’m not sure what to tell you. Hell, I already gave away the entire plot: who is the stronger God, let’s punch each other and find out. 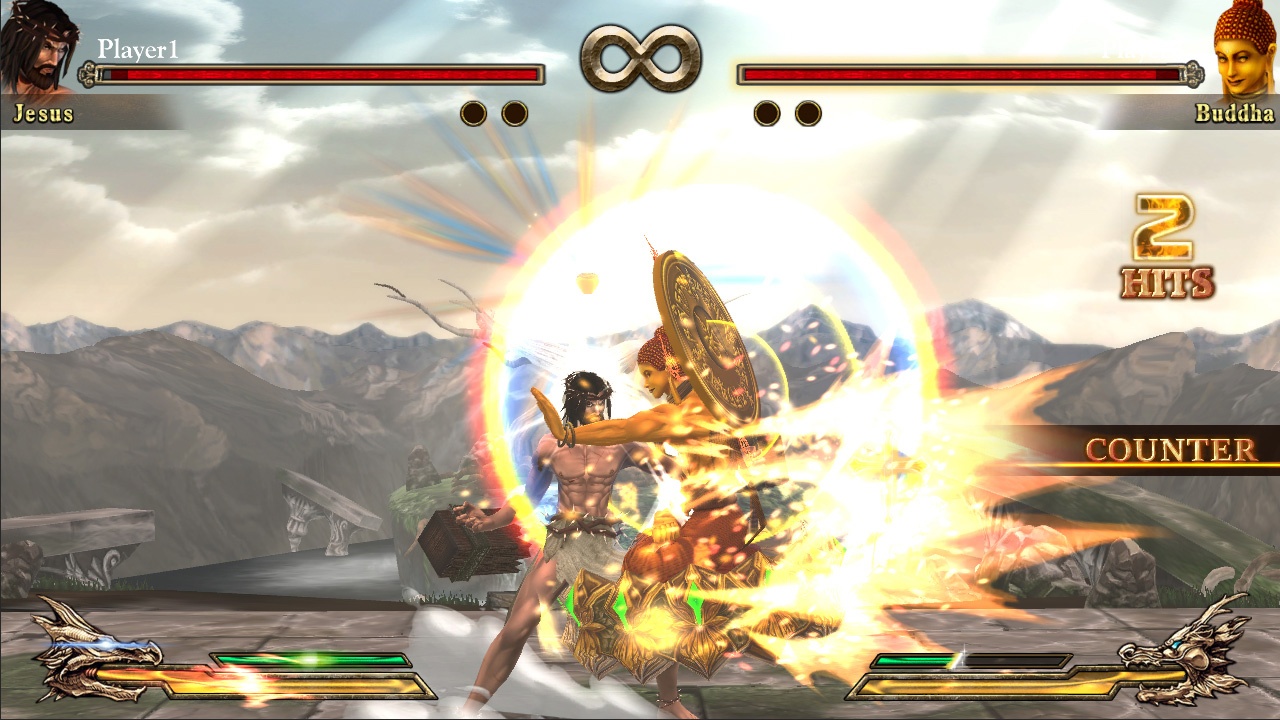 I’d like to start by saying that Fight of Gods is a mostly toothless affair in terms of offensiveness simply because it doesn’t go for the throat. While things like Jesus having his punches aided with pieces of broken crucifix still attached to his hands is certainly questionable, there isn’t anything deeply wrong or astonishing about what’s presented here. There’s nothing particularly vulgar about how the characters are depicted, and, aside from Jesus himself, there’s nothing controversial that you’d find within. If this was a reskin of Primal Rage and you had Buddha doing Chaos’ infamous urine finishing move, that’d be one thing, but everyone’s just sort of chill and fighting each other. Hell, one of the characters is Santa Claus, which I believe was added in to basically defuse the whole situation and make everyone see how ridiculous the concept was. I say that it has no teeth because Muhammed is distinctly missing, easily what would have been the most offensive and controversial figures added to the roster, but Digital Crafter (and probably their publisher, PQube Limited) didn’t actually want to invoke any backlash that could be dangerous. Just have people clutch their pearls and teenagers buy the game in an effort to appear edgy.

Once you get over the initial shock of it all, it’s up to you to find any sort of joy in the actual gameplay of Fight of Gods. It’s there, I assure you, but it’s nothing that you’d look for in a first chance to pick a fighting game. Firstly, there isn’t a ton of variety in what styles each of the characters bring. Amaterasu, Athena, and Sif are more speed style fighters, while Buddha, GuanGong and Santa are the slower “powerhouse” sort, yet you really don’t need to think heavily about counters in terms of matching. If you’ve gotten the hang of the game by the time you main a single type of character, you see that the fighting styles all tend to blend together once the action gets going. If your character has a range attack of any sort, you utilize it to smoke out your opponent into getting too close and then grappling them or just smacking them in the face over and over. You can get some combos going, but juggling doesn’t really appear to be an option in terms of getting domination in a fight. The fact that I was able to get a counter in at all shows me that this uses the terminology loosely: far less Killer Instinct and more World Heroes or even Eternal Champions. There’s been so much evolution in fighting games over the last few years this one almost seems retro and clunky in comparison.

Take, for example, the superpowered move that you have to charge up to pull off. In most games, you’d be able to finish a fight without using that move even once, simply because you could dominate the match OR you’d get dominated so quickly that it never filled up. Most of the time, being able to have enough of your bar filled to pull off an ultra hit of some kind is indicative of a drawn out battle where the tides are evenly matched and you need something to break the tension. In Fight of Gods, I got to use my charged ultra attack at least once per round, generally twice per match. This felt like the game was just handing out assistance without me even asking for it, especially on the normal difficulty where things were just a touch stronger than easy, but not by a lot. If you’re Jesus and you pull off your Ascension charge, then that’s a good 25% of the life meter gone, if not more. If you’re Santa, it’s a full-stage sleigh ride that offers little recourse for your opponent. These ultra moves should be in place to upset the balance, not just hurry along the inevitable. 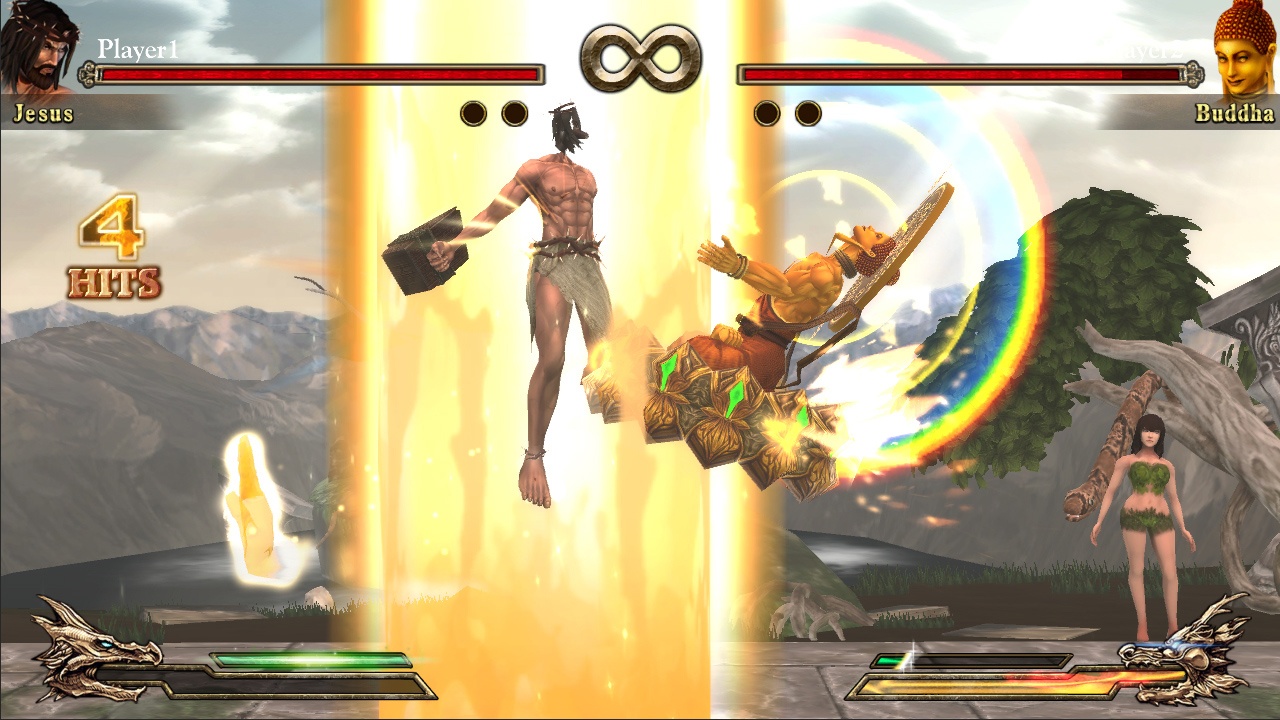 Additionally, The game looks simply BAD on the Switch. The graphics, the sprites, they all seem like they were being designed to work on the WiiU, and then the Switch got released, so the devs said “Good enough!” and quickly ported everything over. There’s noticeable rough edges on most of the fighters, and the background is dreadfully static, regardless of where you’re going. The animations have their moments, but there are times when you see a bit of a flicker that tells you something just isn’t moving as smoothly as it should. On the PC, this could be easily patched out over a series of days, but Nintendo’s QA department runs slower, which we all know because the damn Switch is nearly two years old. Oh, and be sure to turn off the sound if you can: the music is okay, if rather cookie cutter, but the voicework that some characters have is grating and annoying. Santa’s chant of “Merry Christmas” sounds so lifeless it’s like they got a mall Santa to pipe it in.

The end result of Fight of Gods is a game where the novelty wears off in a second and leaves you with just a fighting game. To their credit, Digital Crafter never pretended to be anything else, and it’s not the worst fighting game out there by the long shot. Additionally, it’s nice to get more fighting games onto the Switch, especially in anticipation for the insane year ahead for Nintendo’s machine. Here’s my advice: if you’re a person who adores fighting games and has friends who do as well, then pick up this game. Have it as a secret entry into your monthly tournament as a tiebreaker, and watch what happens. Honestly, I can see this as a proving ground for tournaments, bars, parties, anywhere that other people can gather and marvel at the insanity that’s unfolding, and then get a weird sensation as they cheer for Odin to beat up Anubis. But it just doesn’t work as a solo expedition: it gets repetitive even at higher difficulty stages, and unlocking additional skins isn’t enough incentive to keep slogging through. Fight the good fight, folks.

Controversial characters aside, Fight of Gods is a mediocre fighting game that might have done better with some more generic fighter choices.