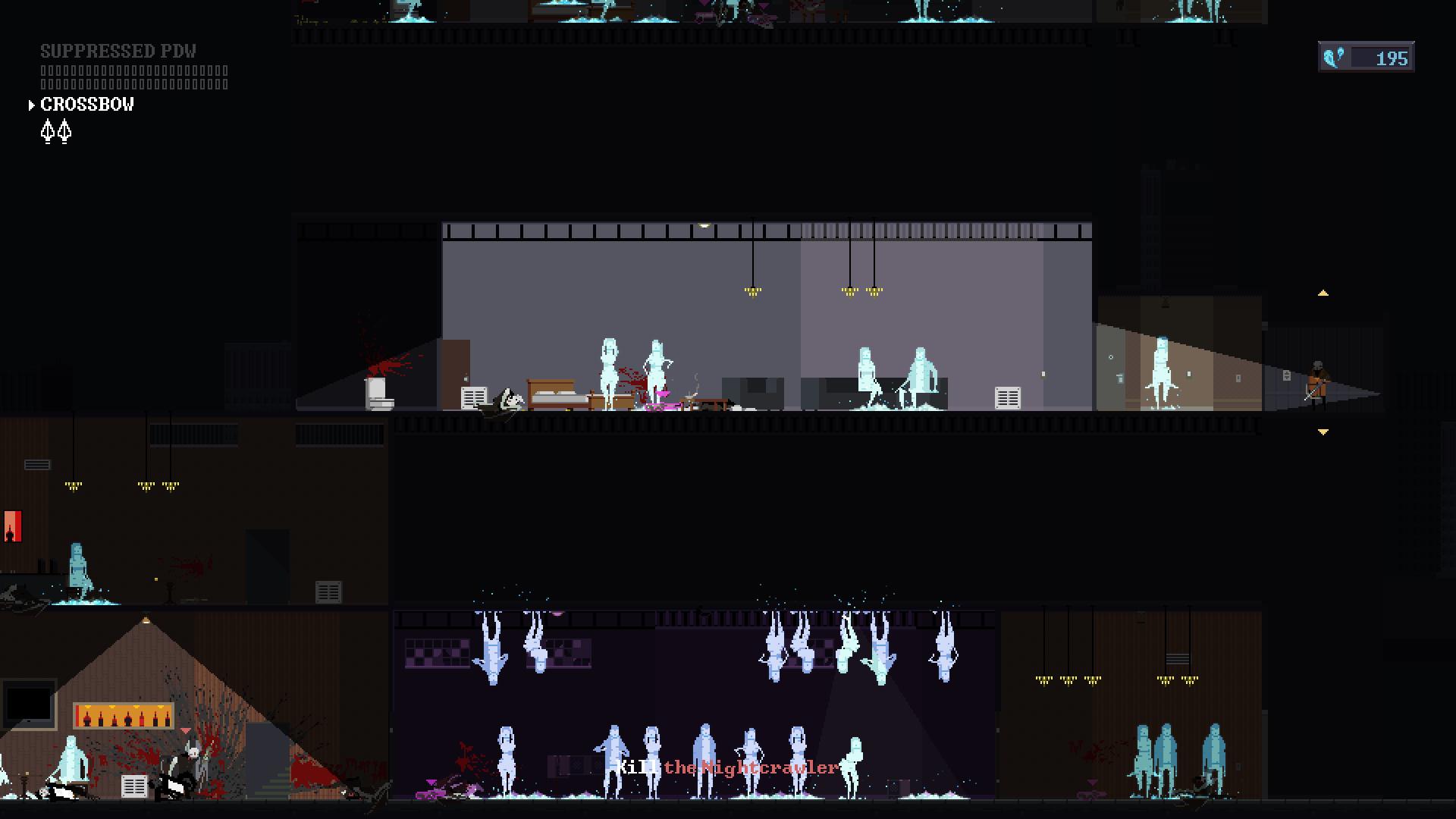 The ability to perform and create, gives people a false sense of grandeur. As many, game developers especially, tend to go above and beyond their skills, knowledge, and capabilities. And this is why, more often than not, modern indie games are a disappointment. As the vast majority of indie developers tries to developer a AAA title, on a 10th of a budget, manpower, and experience. However, just like every rule, this one has an exception. As every now and then, there comes a developer which is aware of its own capabilities, and limitations, an in turn, creates a title within logical boundaries.

Sometime last year, Polish studio iFun4All, has released Serial Cleaner. A title which many would judge to be a one in a million – as it was an exceptional indie game, through and through. However, those who deemed Serial Cleaner to be a single needle in the haystack, have been proven wrong, as the recently released, side-scrolling action game, Deadbolt, from Hoppo Games, has in fact showcased that lightning strikes not once, but twice.

Deadbolt, unlike the vast majority of the overly ambitious indie games, is simple, but with its simplicity it gets straight to the point. Its controls are limited, yet effective and responsive, and if you find them to be undesirable, as aiming is tied to left analogue stick by default; then you can simply rebind all the secondary left-stick actions, to the right (as it is meant to be). And by allowing the player to rebind controls in-game, Hoppo games, have shown that it cares more about the user experience and perception, rather than what Polygon has to say about the title’s under-representation of the LGBTXYZ community. 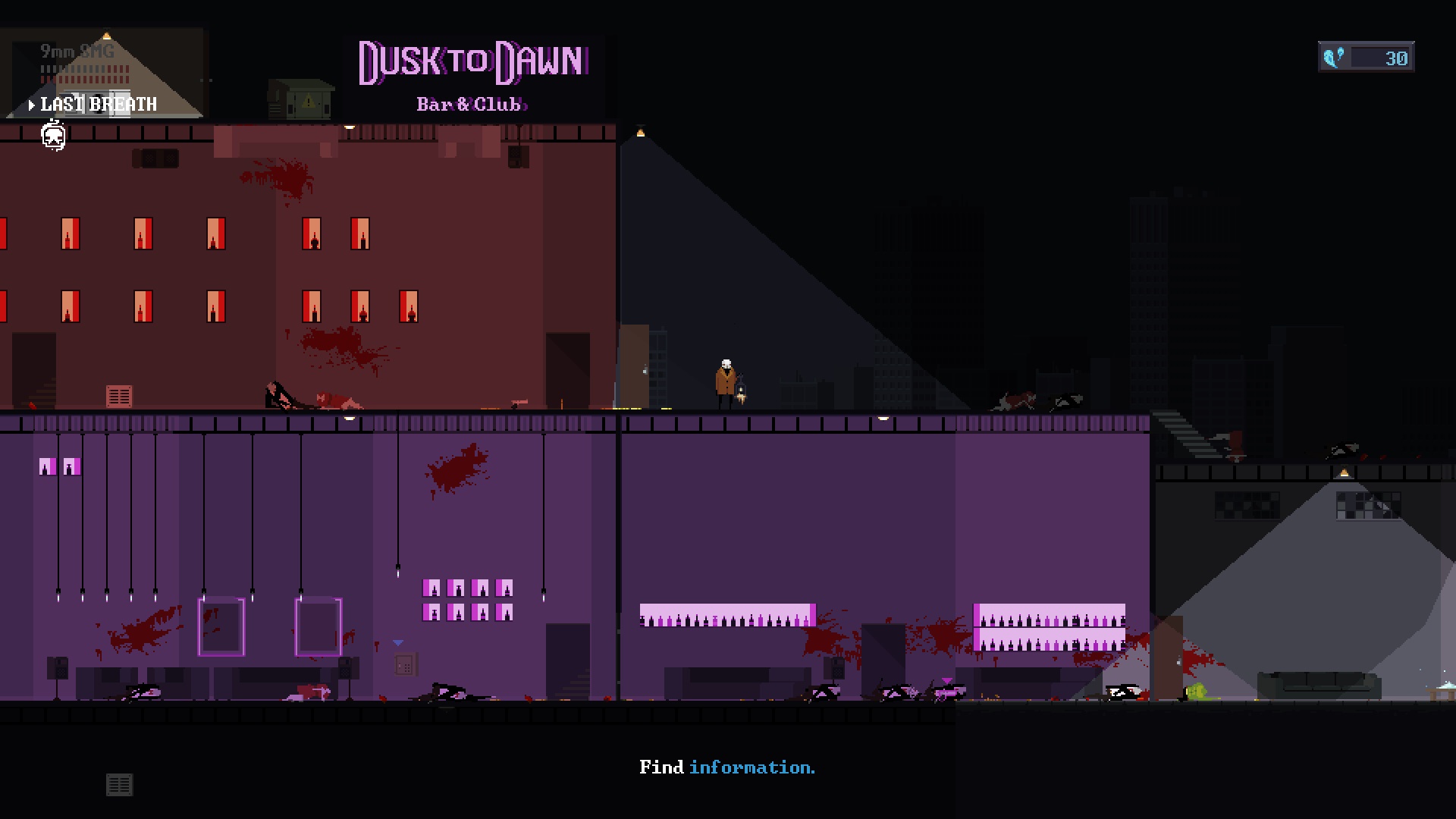 Within the digital world of Deadbolt, your main task is to infiltrate the underworld – both in literal and metaphorical sense of the word – of undead, vampires, demons, skeletons, and other sinister monstrosities. And while you are disposing hordes of monsters, you have an entire arsenal of weaponry from .38 revolvers, through silenced 9mm pistols, all the way down to AK-47, at your disposal. In addition to firearms, you can also use numerous melee weapons, such as scythes, hammers, and knives – and yes, all these can be thrown.

In-game, you move with the left analogue stick, aim with L2 and the right stick (one you re-bind your controls), and carry out all the other actions with the use of X and circle. However, Deadbolt is not all about moving from left to right, like other side scrollers. In-fact, it is all about vertical traversal, as the vast majority of levels has you scale numerous buildings. And you can do so by simply going up the stairs, but if you want to keep your element of surprise, you can use vents, and pipelines instead – and Yes, you can kill somebody while jumping out the toilet.

Deadbolt protagonist’s skillset, sounds a little farfetched for a human being, as nobody could possibly crawl through an ordinary pipe. However, Deadbolt’s antihero, is a trench coat wearing skeleton, who changes into a cloud of smoke, whenever he deems it to be necessary. However, despite of his supernatural nature, he is susceptible to damage, and any enemy can take him out with a single bullet, and/or strike. So, while you may be playing as undead within the world of Deadbolt, it doesn’t mean that you are immortal.

Deadbolt, in its entirety, takes place in a world of grim fantasy. However, its world in many aspects is closer to the one of ours, rather than one created by writers such as Edgar Allan Poe, and H. P. Lovecraft. And in order to survive the drug dealing zombies, and mobbed up, racketeering demons, and their onslaught, you’ll have to pick locks, take cover behind furniture, and drive an ordinary car, in order to reach the final goal of cleansing the world of the monstrous scourge. And whether you want to do so by striking the leaders of the in-game organised crime rings out the shadows, with your trusty scythe, or run in guns blazing, the choice is up to you, as Deadbolt doesn’t limit the player in any way. 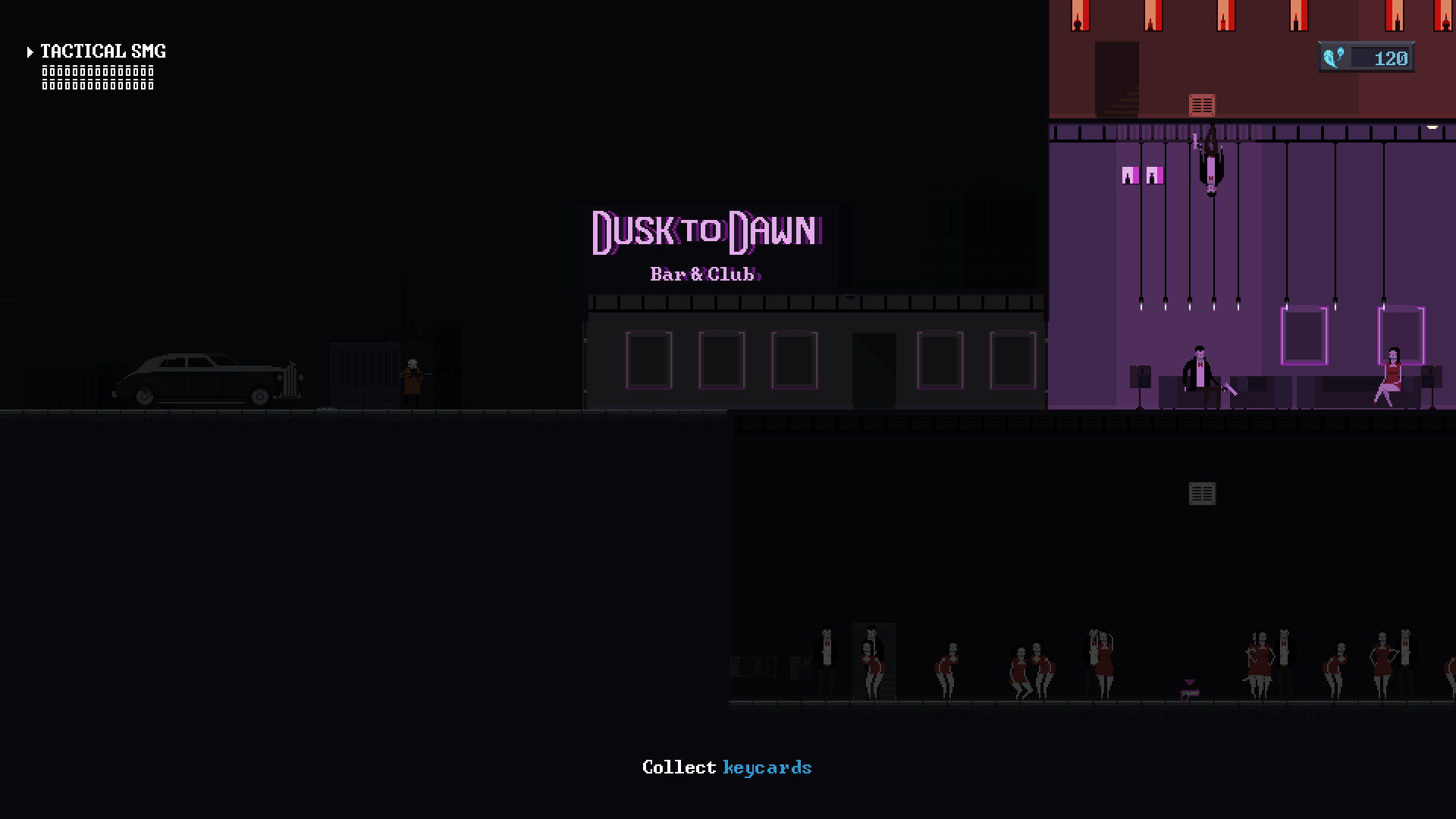 Despite of its simple nature, Deadbolt is an incredibly deep, and complex title. Which in truth, puts many AAA games to shame. And while its mechanics and capabilities may be limited, they are ultimately crafted in an exceptional and borderline perfect way, which ultimately allows for creation of a superb gameplay loop, which could even challenge the one of Hotline Miami. It is a punishing yet exhilarating and rewarding experience. And just like Fortnite Battle Royal, it fills one with a sense of accomplishment, even when one fails to succeed. As everything from sneaking, to killing, feels extremely satisfying, and rewarding in and of itself

In many ways, Deadbolt, is a perfect indie game. It is simple in its form and structure, yet incredibly complex. It may look like a meaningless, thruway, five-minute experience, but ultimately, it is a game which can takes hours, if not days out of one’s life. As most, who get into this particular title, will strive to complete numerous times, as one, is simply not enough. And while the Deadbolt, can be finished within a couple of hours, then it has to be underlined, that the first playthrough is only the beginning. And most who will decide to pick it up, will likely play it through to completion three times or more.

All that really has to be said about Deadbolt’s score, and sound design (reviewed here), is that it is on par with the title’s gameplay, and mechanical structure. And that is saying a lot, especially when one takes into the consideration the fact that Deadbolt is a 10 out of 10, masterpiece. And the soundtrack, just like the game itself, should serve as a template for other indie developers, who in recent years, have really let themselves go.

When discussing Deadbolt, it is incredibly difficult to come up with anything that may be inherently wrong with it. But after hours of searching, and thinking, I have finally come up with a single, yet jarring flaw, and one which is related to Deadbolt’s price. And I’m really sorry to say that, but Deadbolt, is simply too cheap, as it is easily a £11.99 or even £15.99 title, but for some unknown reason, the developer has decided to list it for just £7.99. Which only further proves that Hoppo knows what is doing. And if you have spare £7.99 lying around, then you should spend it on Deadbolt, which could easily become the best indie game of 2018.