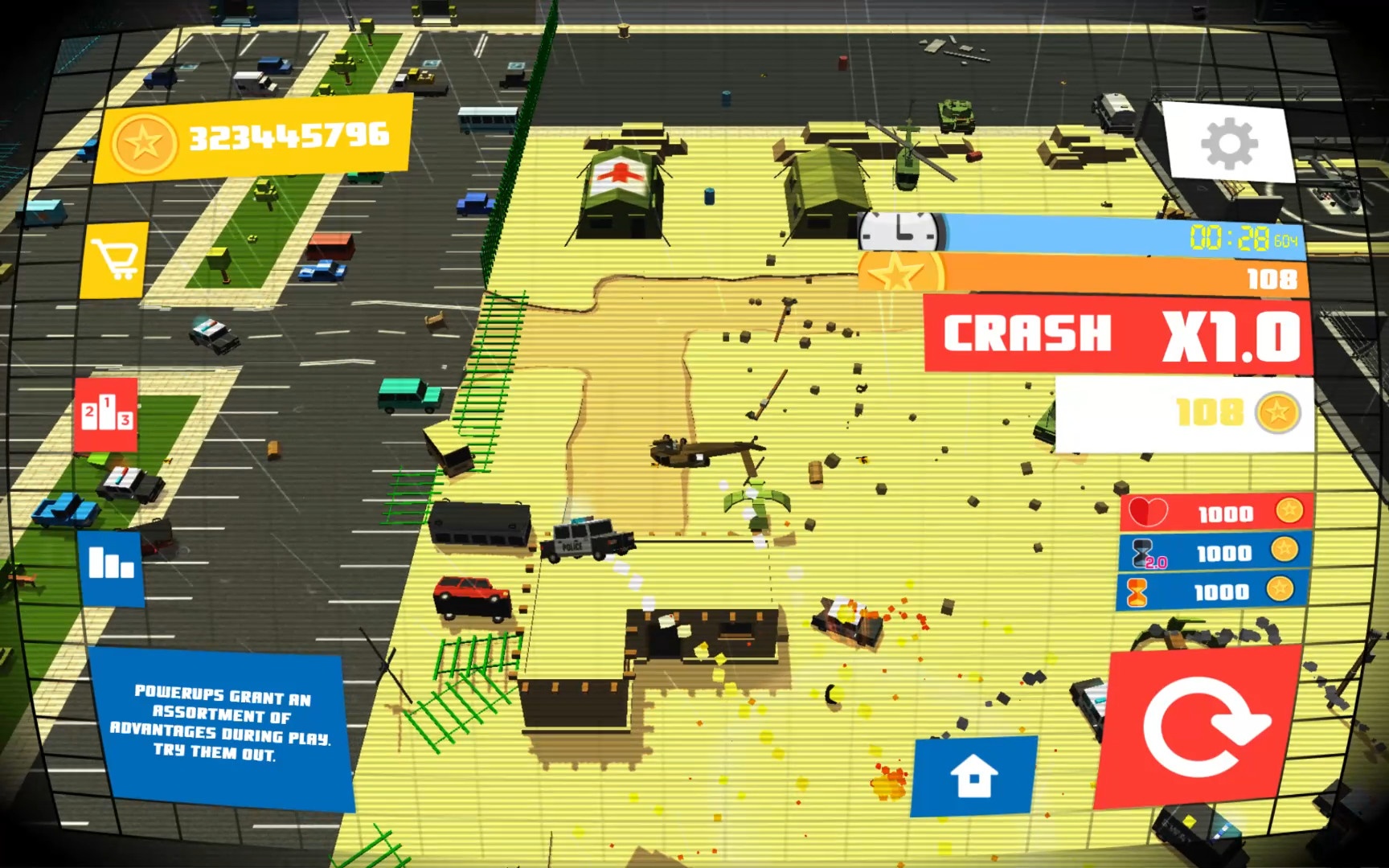 I am sure you are familiar with the saying “If at first you do not succeed, try, try, try again.” That is something that very much applies to Escape: Close Call. You may also have heard “Nobody plans to fail, but some people fail to plan.” That, however, does not apply to this game. If you are going to get anywhere close to completing this game, you have to plan to fail. A lot.

The basic premise of the game is a car chase. You control the car as it tries to avoid the aggressively persistent police. Skilled driving is required to stay one step ahead of the squad cars, especially as you initially find yourself in an enclosed area. In most games, the first zone would be straightforward with the game getting progressively harder as you progress. Escape: Close Call is not most games. It is hard right from the beginning and you are likely to get rammed by the chasing cops in a matter of moments. The second or third attempts will not be much better.

The realisation soon dawns that you are not meant to succeed early on. Even once you get the knack of controlling your car and are able to outmanoeuvre the police with all manner of skids and stunts, you will find you run out of fuel well before the gates to the next zone open. That makes for an incredibly infuriating gaming experience… but also a fun one.

This game would not work if it merely frustrated the player. It needs to offer enough enticement to return for more. One thing Escape: Close Call does very well is create that ‘just one more turn’ factor. Through setting goals to level up, such as lasting a certain amount of time, reaching a points target, or performing a particular stunt, it creates a sense of progress (as does the global leader board – it was great reassurance to see that despite my struggles, I was still in the top 200 for longest time survived). 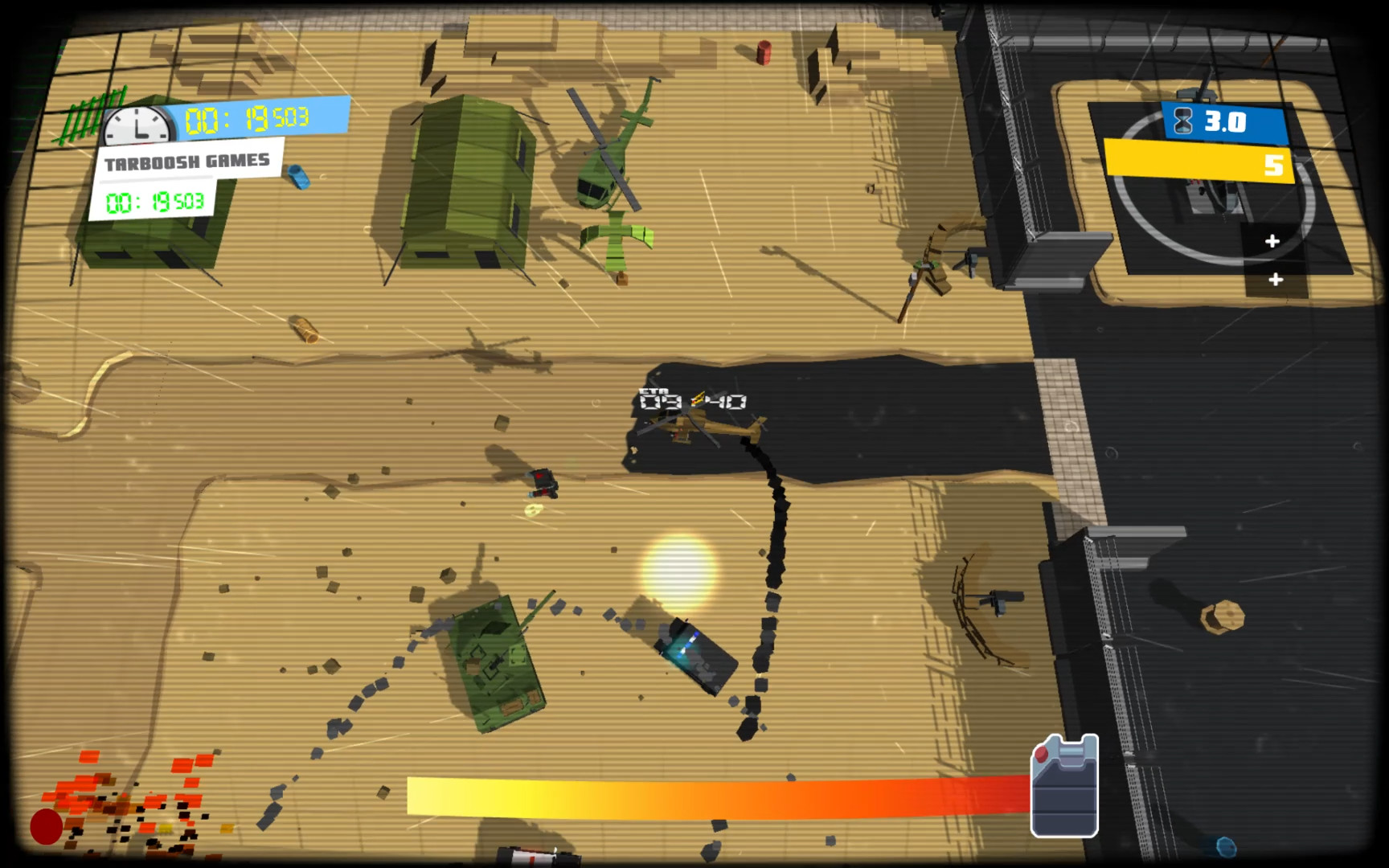 The ‘close call’ referenced in the title comes when you narrowly evade a collision with a police car (any bump from them results in a spectacular crash and an instant game over) and is the main way to generate points. You also get rewarded for controlled skids and spins, exploiting shortcuts, hitting certain items, and performing other tricks. By far the most satisfying stunt to pull off is the ‘undercall’ – the moment when you pass under a police car as it flies through the air after a spectacular crash.

The controlled skids are the most vital manoeuvres in the game though. As you enter a skid, time slows down giving you a split second to see where the closest cops are and plan your exit from the skid just right for maximum mayhem. If you can draw a few police cars in as you skid, the results can be quite spectacular! Or you simply get rammed by a squad car and have to start all over again…

To make it clear, you have to be prepared to run through the first stage hundreds of times over.

Points can be redeemed in exchange for power ups. ‘Extra fuel’ immediately catches the eye but it does not provide anywhere near enough fuel to last the ten minutes needed to survive the first stage. Further fuel can be unlocked but it will cost you. Some of the other items on offer at first do not seem helpful at all – more cop cars being a prime example. However, this actually means a greater opportunity to earn more points and therefore unlock the more directly beneficial (but very expensive) power-ups faster.

One of those power-ups allows you to break through the fence and get into the second stage of the game early. This is a clever way to maintain player interest as the seemingly impossible goal of surviving ten minutes can suddenly be quite literally smashed. 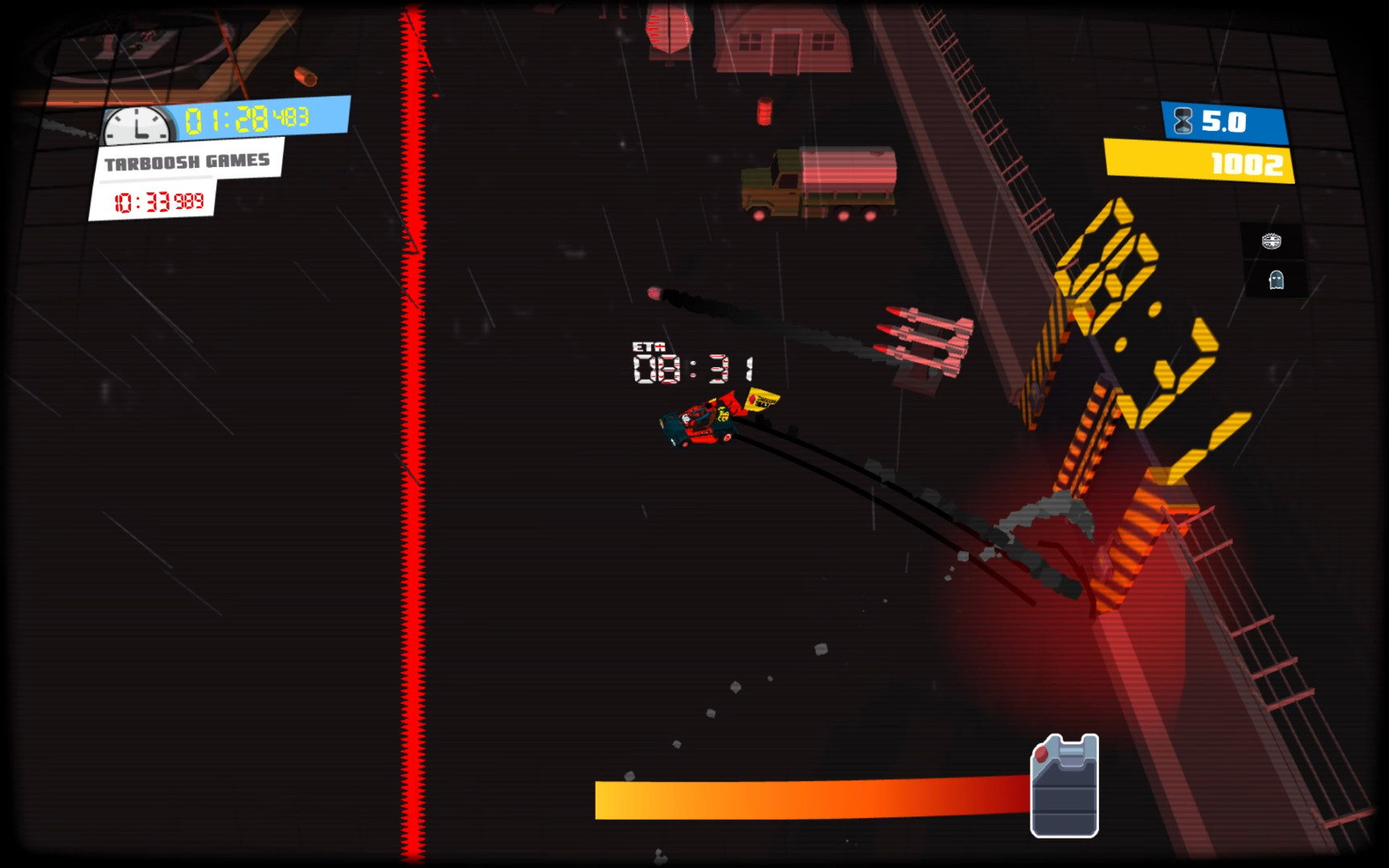 The game also has an enticing retro presentation. It looks like you are viewing through an old convex monitor screen complete with fuzzy interference and blocky coloured stripes appearing at certain moments. The bird’s eye view of the action is reminiscent of a cross between 1990s renditions of Micro Machines and Grand Theft Auto. To my veteran gamer eyes, this all fits the arcade-style action of the game perfectly.

While the sound effects are basic, the music is superb and used to a very good effect. There is a generic soundtrack of 8-bit era chase music that gets over-ridden by a pumping hard rock riff as you lock into a skid and create chaos. A more mellow, sorrowful tone takes over as a slow-motion view of your car sailing through the air signifies yet another failed attempt. This music will soon be stuck in your head as you will hear it a lot.

The only downside to the game is that it does eventually become something of a grind. In order to reach the next level at one point, I had to gather enough points to unlock the gate-crashing ability. That took ages – a stark contrast to the relatively quick achievement of targets before that. Once I was able to make the purchase and blast through to the next stage, it did give a feeling of satisfaction. However, I was on the verge of giving up a couple of times.

This is a great game to play in short bursts. It packs a serious level of challenge with just enough enticement to come back determined to last a little longer and try out a new tactic the next time. While you may never reach the end (after several hours of play, I have been unable to get past stage two of three), you will have fun trying to get there. Just be prepared to fail…. again… and again… and again…