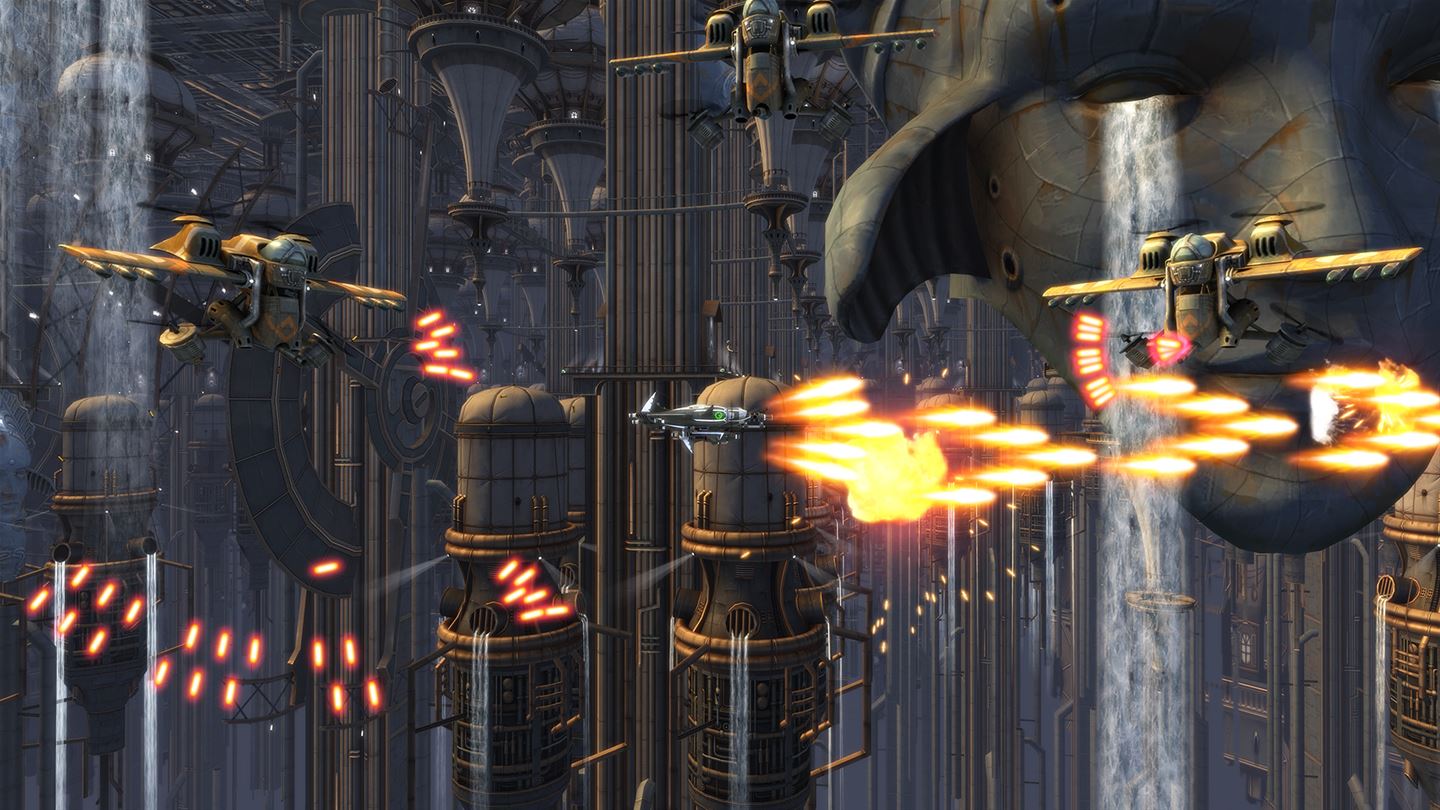 Not every game aims for the stars. Sometimes you get a game that simply wants to be, to entertain, and that’s more than ok. Much like you have popcorn movies and one-hit-wonders of the radio, there are games that can pop up on your radar, have a good time and then quickly disappear. I think I spent one merry afternoon years ago being totally embroiled in Powerstone 2 for the Dreamcast, and that was all I wanted or needed to play, never needed to go back. But there are titles that want it all: the action fans, the philosophy nuts, the story shippers and the artistic elitists. Sine Mora EX vies for all their attentions, and the result is surprisingly cohesive.

I can’t give away the whole story of Sine Mora EX, partly because I didn’t totally understand it and partially because one the cruxes of the game is the insane twists that happen along the way. The best thing to understand is that you take the role of two different people in turn: a grieving father, hell bent on avenging those he blames for his son’s death, and a woman who is the last of her race, having had her people exterminated by the Empire who is also the target of the father’s rage. They take it in turns to fly missions in retrofuturistic airplanes in order to extract revenge one explosion at a time, and it’s partially done in a bizarre, overlapping manner thanks to time travel. Time travel is a HUGE facet of Sine Mora EX, being both a catalyst for the game’s background story, a vessel to assist with how the game can even function, and a necessary evil to provide the how and the why for the game’s conclusions. I use the pluralization because there is more than one way to view and interpret the ending of the game. This all feels a bit silly, being so cloak and dagger about the plotline of a game that’s a few years old and easily searchable, but there’s nothing wrong with being covert about spoilers if it’s relevant to the conversation. 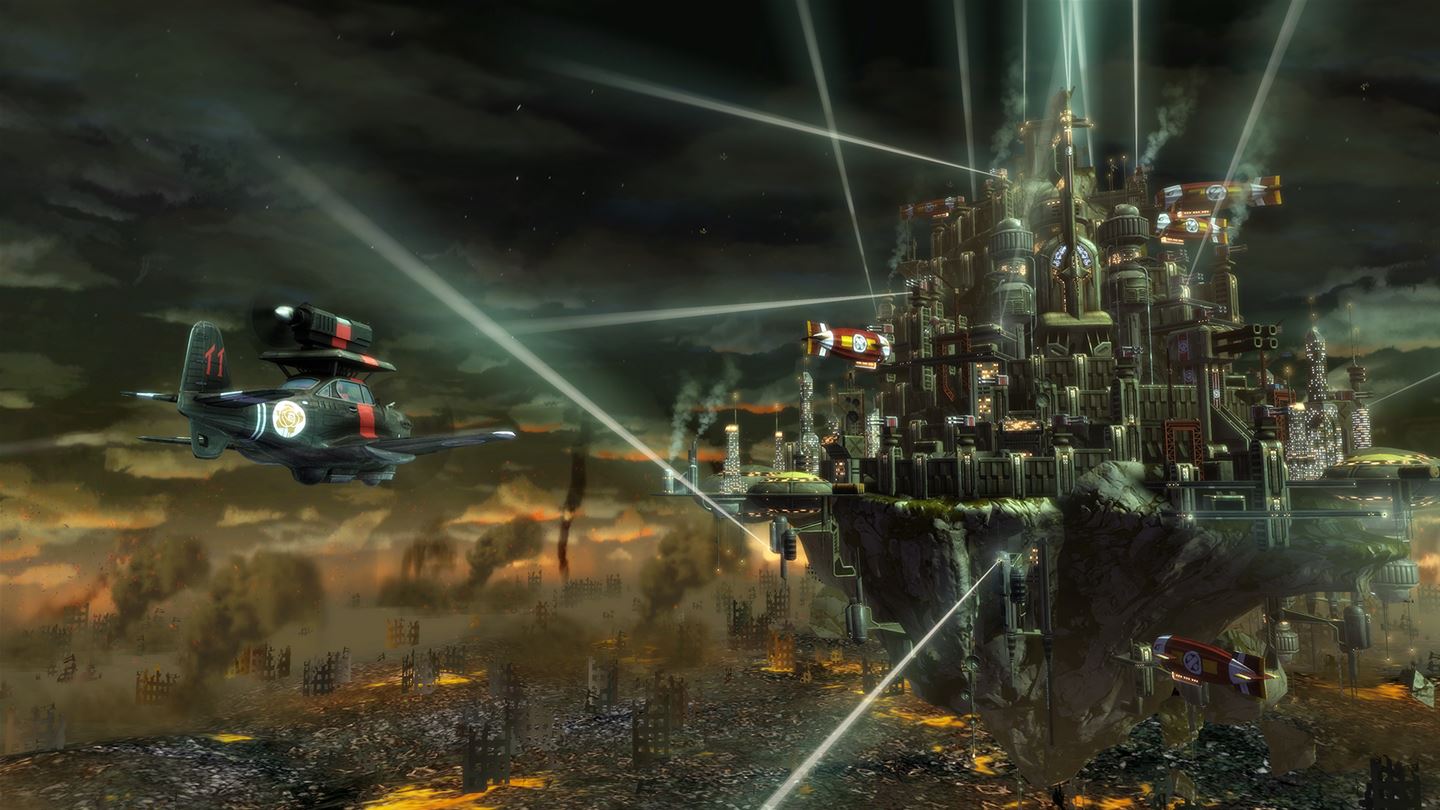 On the story front, Sine Mora EX does deliver in a very cinematic and powerful way. The narration between stages (and even during) is supremely acted, with a lot of great, dark tone pulsing through the explanation about the losses everyone has suffered and the rationalization of the murders being carried out. Sine Mora EX is far from cut and dry in terms of who is right and who is wrong, and I think that’s one of the reasons that we use anthropomorphic animal people as our cast instead of regular human beings. We can more easily swallow the thoughts of genocide and vengeance when we project it on figures that aren’t too similar to our own. Once you make it “human,” things get uncomfortable and publishers, especially ones like Nintendo, might be a little less apt to let these games through. Then again, try and imagine The Last of Us as portrayed by a cast of panda bears. It’d never work.

Sine Mora EX presents in a gorgeous 2.5D shooter of the horizontal nature, and Grasshopper Manufacture has done a bang up job of making a sideways shmup that’s both welcoming to new players to the genre but also scalable to be challenging. You get a variety of ships throughout the main story, each with it’s own unique “power” weapon, and beating chapters with the ships unlocks the ability to use them in the arcade mode. You also have your choice of pilots, but that doesn’t really seem to do much other than add more flair to your flight but whatever. The ships, besides being equipped with some pretty intense firepower, also get either own, rechargable time manipulation powers. Sometimes you’ll be able to slow time to a crawl, allowing for easier bullet dodging. Others, you can rewind time a la Prince of Persia, often times undoing your own death, and those are just the first couple of powers you encounter. Sine Mora EX handles the idea of time control well without it becoming either gimmicky or too powerful. In fact, it becomes an essential tool in later games, when you start to get cocky and wonder why the option even exists.

The bullet hell element is also well balanced, with easy disappearing in favor of a simple “normal” and “hard.” Normal gives you plenty of chances to be redeemed, with enemy hit points being lower, shields recharging faster and bullet intensity being less. In both modes, you often have time to prepare for incoming onslaughts, as the gorgeous rendering will show enemies flying in from the background to the foreground, adding valuable seconds to your calculations. With a bit of planning, even the most novice of players should be able to dodge and take care of the first few chapters with minimum damage. The problem does come with maintaining your edge: at first, enemies are fewer, so getting the powerups to charge your main weapon to capacity is easier and becomes essential. When you get hit, however, you drop several of your powerups and have a very limited window to get them back before they disappear/you stop being invincible. It’s a slippery slope: keep the dodging up and you feel utterly in charge of the game, but get hit once and you’re busted back down to the mailroom. It’s the ultimate in risk/reward as far as deciding to go after extra enemies and try to achieve bonus chain goodies. 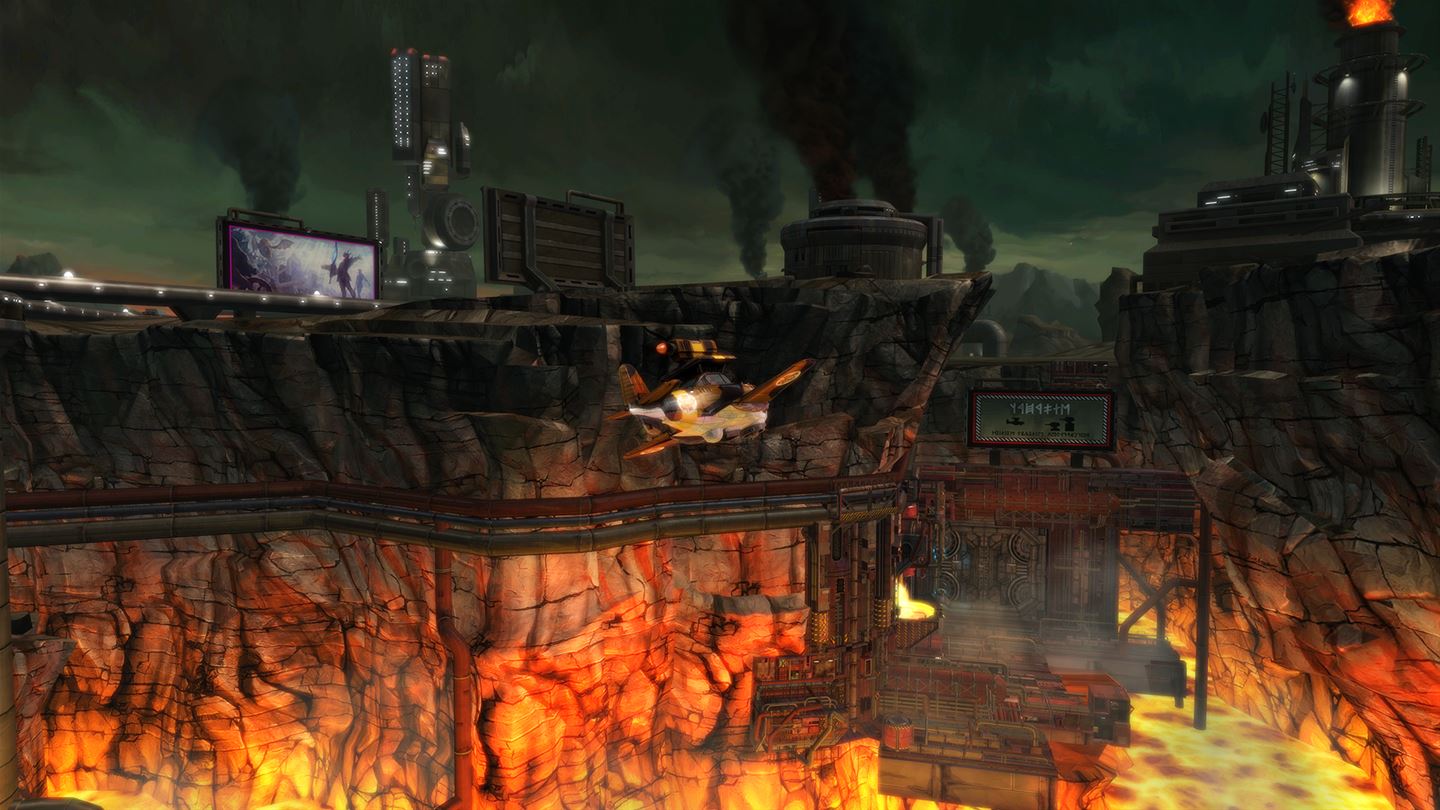 As for Hard mode…it’s hard. It’s hilariously hard. It’s “I died before even seeing the first boss” hard, and I say that purely as someone who dabbles in bullet hell, I never live there. The game looks the same, but Sine Mora EX might as well be a separate title when it comes to hard mode, at least for me. I can admire and appreciate the people who enjoy the challenge and the knuckle-whitening intensity, but it totally destroys the moment for me when I need to just let the controller fall from my hands instead of smashing it. Unlike games that are built to be hard (Dark Souls, Volgarr), games that have a switchable mode that goes from easy to hard means that the developer knows what the game is like and offers an out for people who aren’t willing to put up with it. Kudos, Suda51, that hard mode is not for me and I appreciate you letting me exit through the gift shop.

The biggest obstacle for Sine Mora EX on the Switch, ironically, is time. A well polished, involved and strong shooter that has a captivating story deserves attention, and the timing for Sine Mora EX couldn’t be worse on that front. October is a blockbuster month for Nintendo, so I’m concerned a fantastic but slightly older title such as this will go by the wayside in terms of exposure and adoption. Still, if there’s one thing shmup fans have showed me, it’s that newest isn’t always best and the classics live on in spite of anything else that comes their way. If you’ve grown tired of the NEO GEO titles available and want a new but still fresh challenge, Sine Mora EX is one of the best bangs for your buck available today.