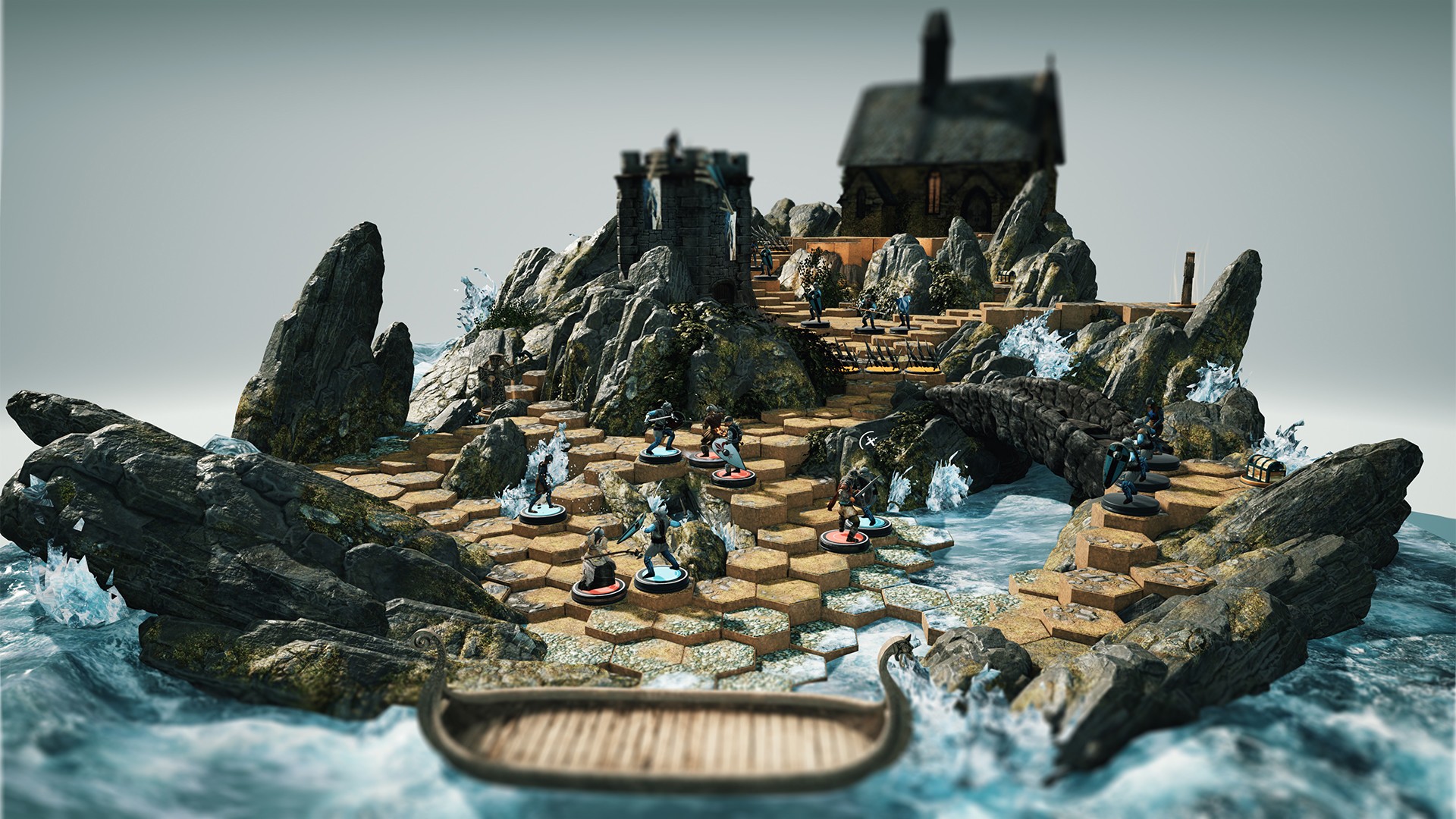 The world of computer gaming is a rapidly changing environment. The fan base demands quicker, more exciting products, and larger worlds to explore. The story lines must be enthralling, and the majority of players want to lose themselves in it without having to think for themselves. Though gaming is social, it tends to be a lonely place. You find that you have lots of virtual friends, but most of your time is usually spent sitting in a room by yourself. However, there is a group of gamers who buck this trend, they gather in large groups in the back of small shops and allow their imaginations to power the stories, and their adventures, these are the players of the board game world. With a limited market, many developers don’t focus their energy on the latter group, so it always peaks my interest when I see a title released that encompasses many of the ideologies and themes in its gameplay.

Development team PlayWood Project Aps has created a “cool-down” based strategy game, inspired by Norse mythology. You must control your band of Viking figurines across a number of increasingly challenging levels. In WARTILE the story begins with you taking up the mantle from your father, a disease has spread across the land and has taken his life. You are introduced to the basic fundamentals of the game during a tutorial stage in which you are tasked with laying him to rest. From here you are narrated through sections of the story by a rather dramatic and booming voice.

The board game inspiration is not implied by the literal use of a dice, this would be far too restrictive and would take away the flow of the action. It is shown with the art style and the character models. You must move small figurines of your group around each board, movement is denoted by light orbs on the floor, and is limited depending on the ability of the hero you have selected. The theme is continued with character customisation. This is rather confusing to begin with, as each item has a damage range, health bonus, and defence indicator. You are also able to add additional bonus items that increase stats further. Though it does take a little getting used to, it really is quite in depth and will certainly have fans of the genre excited, it also gives you the feeling that you are customising your troops to your game style.

As I have mentioned, each stage is referred to as a board. The boards themselves have their own stories, and are broken down into several levels, each has an increasing difficulty where you must complete the same aim but with a much more challenging approach. You may think, why on earth would I want to repeat the same level numerous times? The idea of that seems mundane, repetitive, and unnecessary. For me at least, this wasn’t the case. The additional challenges made the title extremely addictive, each time you approached a harder stage you had to replan your strategy, and adapt your team, while still aiming to achieve the same objective. 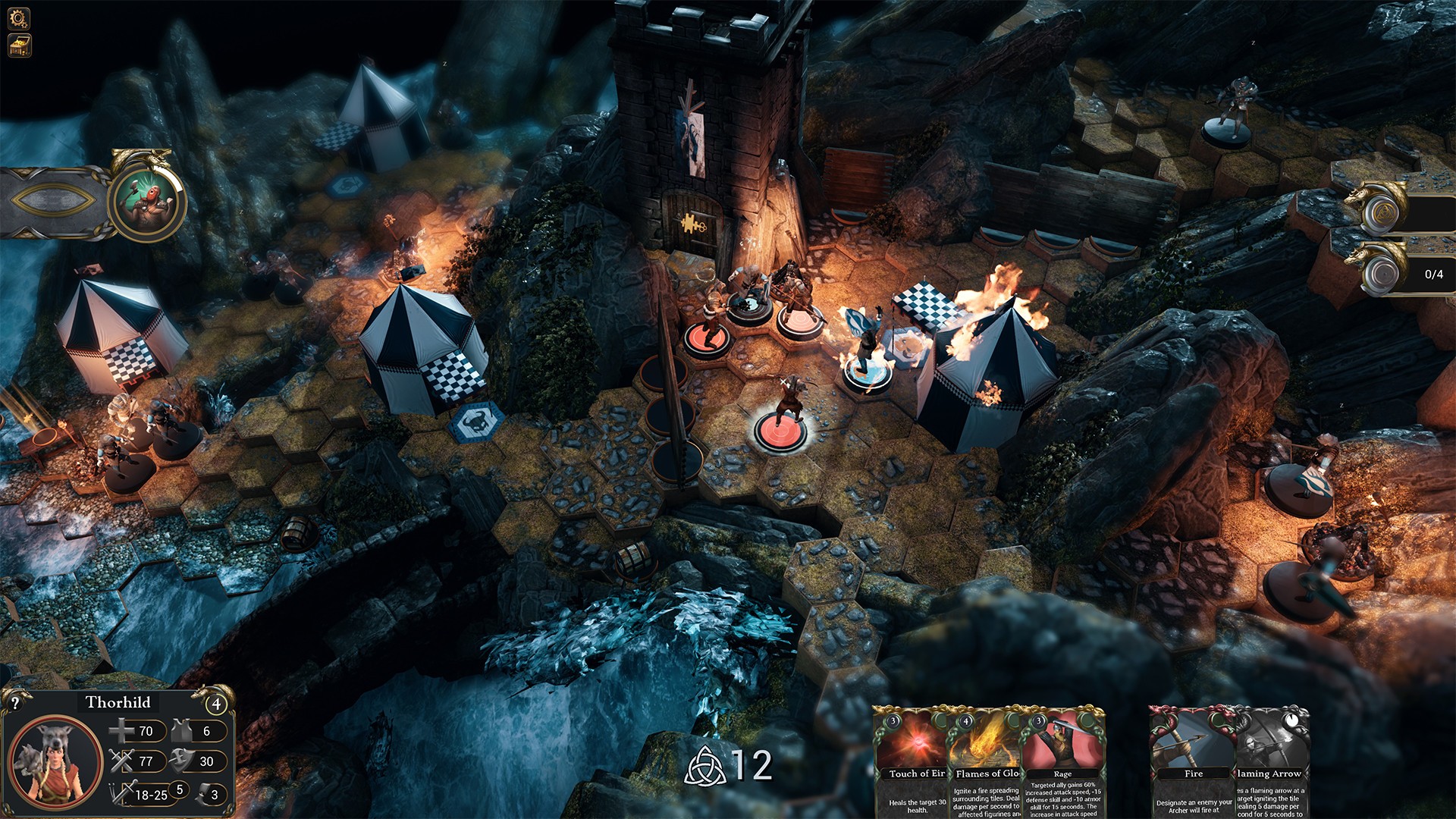 WARTILE is a graphical delight, it runs smoothly most of the time, and the world’s are unique, interesting and highly detailed. The figurines are exquisitely designed and the character animation works exceptionally well. The developers have done a great job at making the action easy to follow, each area on the board is highlighted by a different colour depending on what it denotes. A clear and distinctive blue area shows when you will interact with your enemies, this allows you to plan your strategy well in advance. With the ability to zoom in and out as you please, and pan around the map, it’s easy to keep track of everything that is happening. With all the positives, there are a few negatives and these are as follows; the action tends to slow down when a number of tasks are being completed simultaneously. This could be a deliberate act by the developers to ensure you have time to watch the action, my vanilla Xbox One not coping with the demands placed upon it, or more than likely the game engine not liking the task it has to handle. The second issue is really quite annoying, and oddly only happened when I played on a large screen. When you paused the game you were unable to see which option was selected. You would move to chose the end level section, and you’d have no idea if it had been highlighted. This fault, however, did not occur when I used the game streaming option on my phone. It was frustrating as I ended up restarting a level a number of times, losing all my progress in the process.

I admit that when I started playing I had a fear that stemmed from my dungeons and dragons days, I thought it was going to be super complicated, and I’d need a degree in geekism to even contemplate tackling level 1. Well, luckily this isn’t the case, mainly because I’m still awaiting the completion of my geek degree. Though there is a lot to understand and take in, once you get the basic fundamentals it really is straightforward. Movement and actions are easy to complete, the main menu is simple to navigate, and customising your characters is laid out in a methodical and clear manner. You have no requirement to command an attack as everything is based on the proximity of your figurine to its enemy. Your main concern is the movement and your special abilities, these are extremely important as they can save your life, and turn the tide of the battle in your favour. 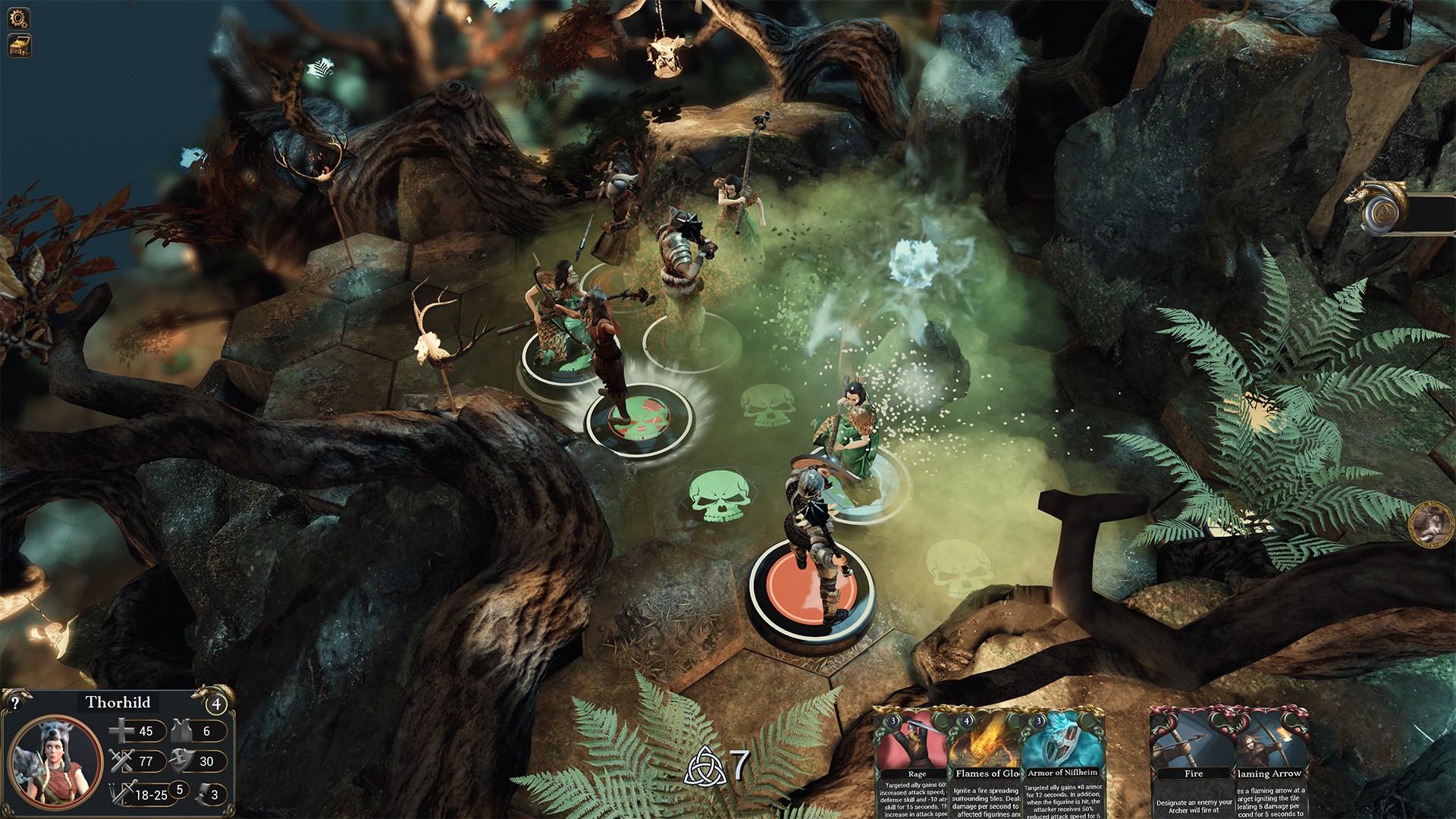 As a fan of fantasy films I really enjoy a good dramatic musical score, WARTILE really doesn’t disappoint, reminiscent of the Lord of the Rings Trilogy, the powerful audio sets a dramatic atmosphere, this matched with the expressive narrative, you have the perfect mixture of emotion and story. The music varies brilliantly, and the sound effects are relevant and matched the game’s theme. With such strong music, it could have easily overpowered the action, or distract you from the gameplay, it certainly doesn’t. Though it was bold and obvious, it complemented the gameplay, and emphasised the storyline.

I genuinely didn’t think that I would get as hooked on this as I have done, the gameplay certainly is addictive, and each board is set in such a way that you can pick it up and put it down as much as you want. The varied levels of difficulty adds a replay factor, and I lost a number of hours to the phrase “just one more try”. Looking through the achievement list I’d say that you are looking at a reasonably tough game to crack in order to obtain every achievement or trophy. I’m going to stick my neck out here and say you’re looking at between 30 and 40 hours to complete the game, so it’s pretty good value for money.

A title that has very little for me to be negative about, other than the few graphical issues, and the slightly confusing customisation fundamentals, it works brilliantly. It is challenging and will not appeal to everyone, especially with the action replaying across the same boards several times over. Fans of board games, and strategy titles will be in for a treat, an absolutely splendid title that is oddly addictive, and atmospheric. I guarantee you will look at your watch at the end of a gaming session and not realise where the time has gone. I’ve loved all the strategy games that I’ve played recently, but I have to say this one tops the lot, and sits just behind Xcom in my all time favourites, so high praise for an Indie title.

WARTILE is a Nordic themed “Cool-down” strategy game that will have you coming back for more. Will you be able to lead your people, and honour the memory of your late father?

The game tends to lag when a lot of action is taking place.
Unable to identify options from the pause menu.
The game fundamentals can be tricky until fully understood.