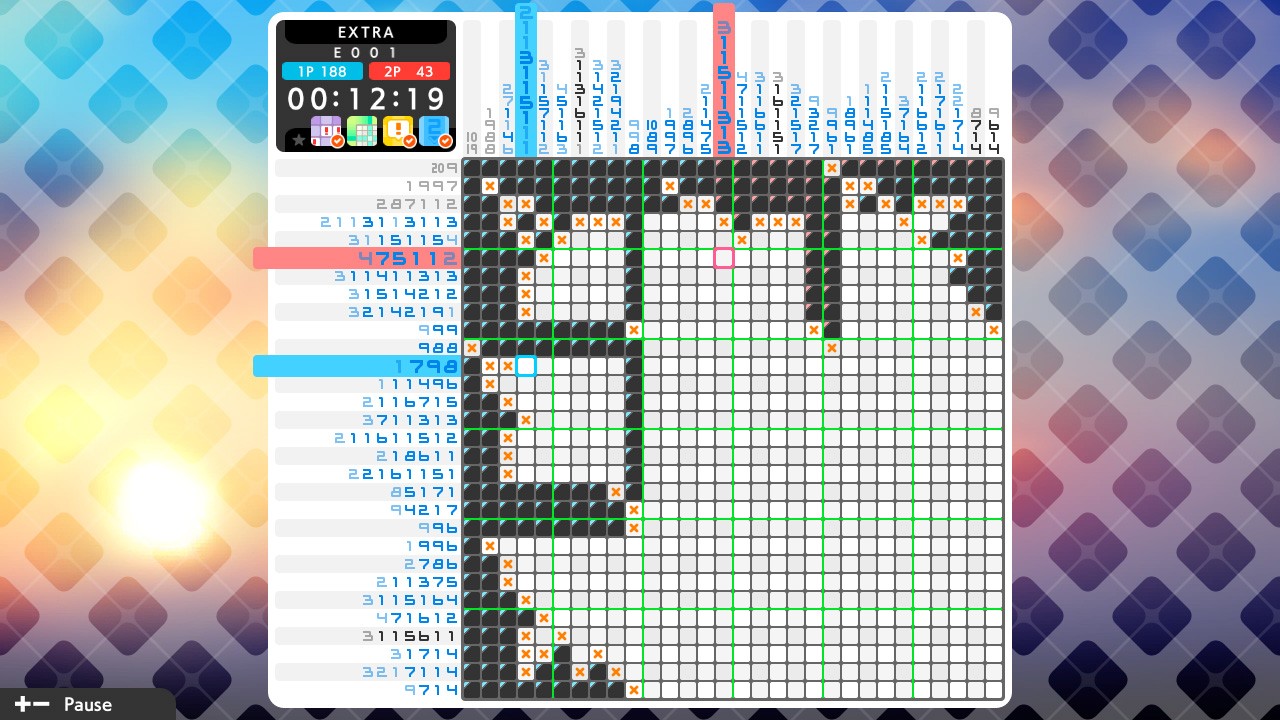 Returning to the world of Picross is like picking up a crossword puzzle book after having not done one in about eighteen years, which, coincidentally, is about right for me. Sure, there might be some kind of overhaul or innovation within the mechanics of it all, but you’d be right to think that, at the center of it all, nothing has changed. You drop letters into lines based on clues, and you make it work until you’ve finally landed on an eight letter animal that lives in the ocean (elephant). Coming back to Picross S4 after several generations of sitting things out, I thought there might be some kind of change that really set everything apart. For better or for worse, there simply isn’t: it’s still Picross, Jupiter is still doing what they think is best for the game, and I still spent several lovely hours going over the same song and dance as always.

Players who are jumping into this particular game for the first time will note that it looks a lot like sudoku, though, instead of putting down numbers, you use the numerical hints to fill in the boxes in the puzzle to create an overall picture. Putting down the blocks correctly will lead to the revelation of a tiny pixel art puzzle, one that vaguely looks like something but looks more like something when you pull back. This is the core mechanic that hasn’t changed a lick, and it’s probably better this way. This is the sort of game that people come back to time and again as a sort of meditation, but it depends on how you get your first dose. If, for example, you started on the Switch or another console, then this becomes a fantastic extension of the genre and you dive, head first, into the number of puzzles, of which there are many. If, though, you started on a smartphone or a DS, you’ll want to use your stylus or finger to fill in the blocks, and Jupiter is still, inexplicably, ignoring my letters about touch screen controls. No dice in this game, which automatically negates it from a serious replay in the future. I got into the groove just fine with button controls because I’m a professional and I said I would review this game, but the lack of touch is just such a pain. 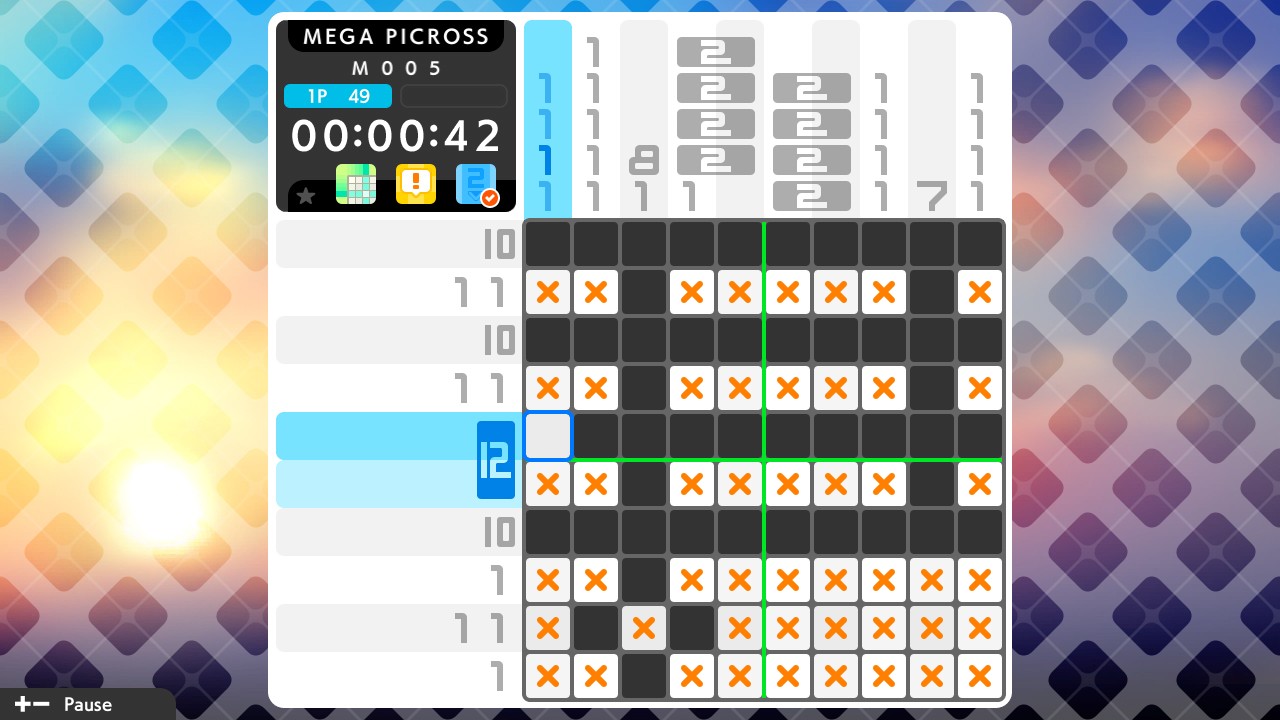 However, there are a lot of good things about Picross S4, and my complaints about the controls and the lack of a decent soundtrack are not two of them. Firstly, you can dive in anywhere in the puzzles that you really want. If you’re old hat at Picross, don’t force yourself to do the old 5×5 puzzles and try to act surprised when you unlock a bunch of cherries or whatever. You can move straight into the more complex puzzles, attacking the giant pictures in either the standard mode or the deluxe mode, where you have a set of numbers that apply to multiple rows and force you to really think outside the box. You should, and I stress should, do all the puzzles, because they’re important for unlocking the mega puzzles that ask you to reference old puzzles in order to make the giant collage of new puzzles. Just, if you’re feeling saucy, don’t limit yourself to something where the idea becomes obvious after just a couple seconds. Jump ahead and really push your limits if you’re in the right headspace.

Also, Picross S4 adds Color Picross puzzles, which is a very pleasant and unexpected addition. You see, in traditional Picross, you use the numbers to add black blocks against white tiles, and then any sort of color or animation is added once the puzzle is complete to give the end effect more of a pizazz presentation. Color Picross actually tasks you with following those same numerical guidelines BUT adding in the inclusion of a multi-colored palette to focus on in creating those lines. While not wildly more difficult, this new approach adds a paint-by-numbers sort of thoughtline, wherein you have no idea what picture you’re creating, no idea if it’ll look the same once you finish and blow it up to a larger size, and no concept other than a small hint to what you might be angling towards. The button controls actually work out very well here: toggling through the given colors to land on which one to add to the puzzle is intuitive, much more fluid than not, and comes across well. I had more fun with the Color Picross Puzzles than the others, and I think, in part, it’s because the formula was shaken up a bit instead of languishing in the old style. 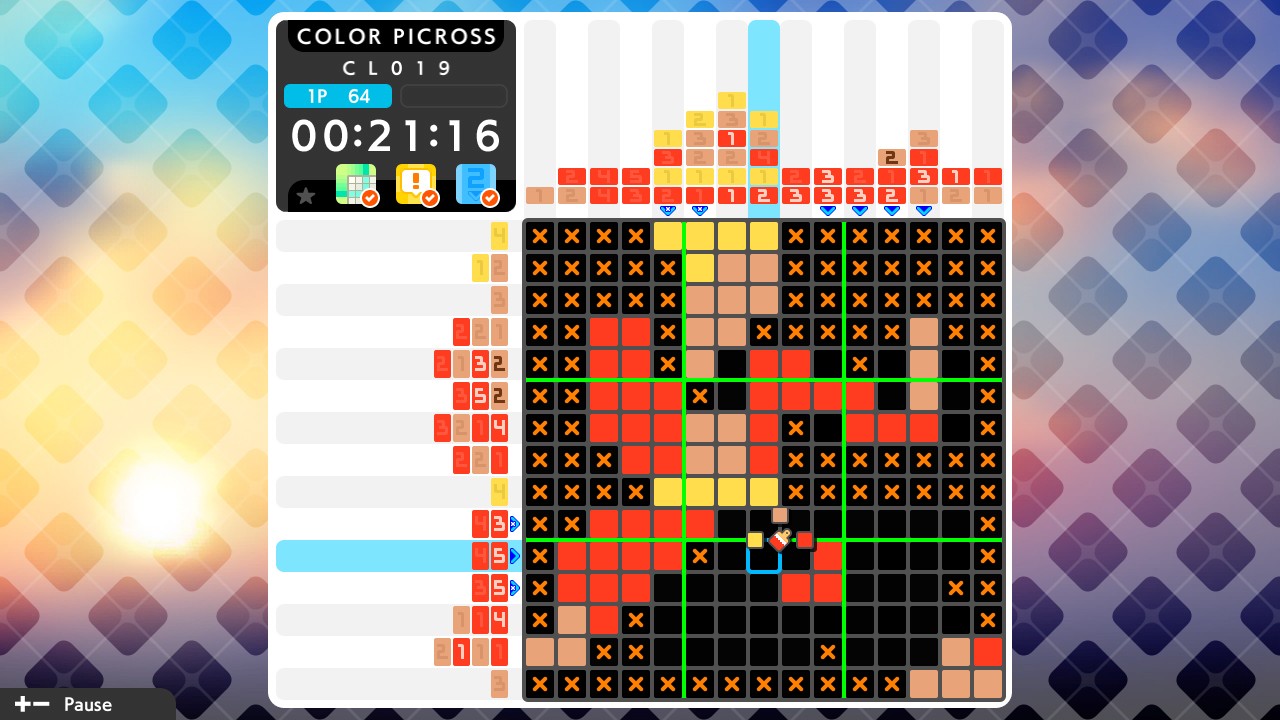 The best and worst part about Picross S4 is that it really scales well to how much a player wants to invest in the given difficulty of a Picross. If you want to, the landscape can be cold, desolate and unforgiving. You get the natural guidelines of where to put blocks and that’s it, good luck buster. But they can peel that back a bit for you. Inconsequential X marks can be added if you make a mistake and land in the wrong place. You can spin the hint roulette and fill out an entire row from the start, giving you the ultimate in a heads up as to where things should and shouldn’t go. It doesn’t even need to impact your overall performance, either: there’s no score or timer to be watched, no global leaderboard that you’re keeping pace with. You just need to make the picture, and we feel like the game has given you more than enough opportunity to make that happen in a safe, comfortable environment. Though, when it all comes down like that, you need to figure out how you’d like to play the game, and, no matter how you cut it, there isn’t really a “challenging” way to play the game.

That’s the biggest factor to remember when picking up Picross S4, and most players will already know this. Picross isn’t about a super challenging, bleeding edge sort of puzzle or time-attack experience. It’s a long form exercise in bite-sized pieces, each slice of gaming slightly bigger than the last until you’re feasting on a massive puzzle that takes a lot of time but not a lot of concentration. It’s the ultimate in relaxation with focus without the need to stress. If you want, you can up the difficulty from “passive picture creation” to “minimalist logic association,” but it will never reach that level of challenge that some people need. Having said all that, it’s a lot of puzzles, they look great, and the mega Picross looks great when you put them all together. If you already know Picross, you know you’ll pick this up and while away the hours with no other obligations, and that is perfectly alright.

Venture back into the world of pixel picture creation in this relaxing but ultimately uncomplicated puzzle experience.