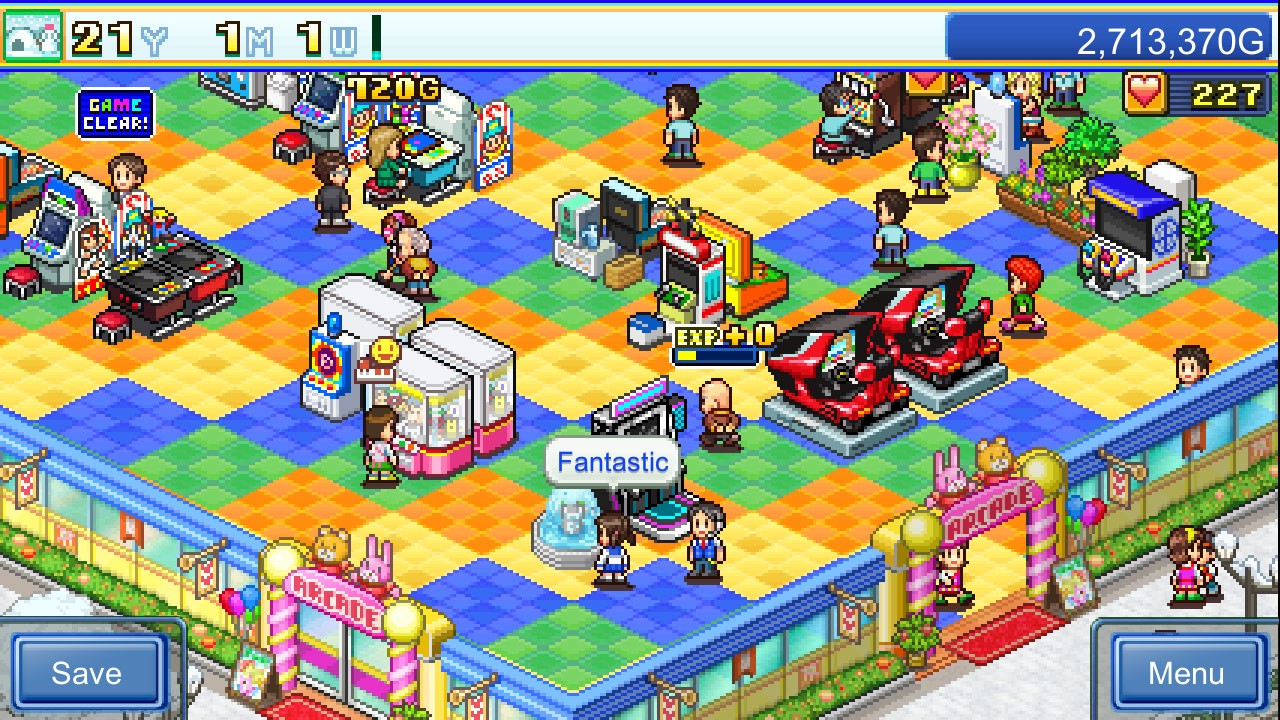 If there’s one thing you can usually be sure of, it’s that you know what you’re going to get from a Kairosoft title. Their style of gaming has a distinct brand to them, both in terms of gameplay and visual appeal. Primarily management resource and strategy games, their mobile roots shine through brightly to create an instantly accessible array of titles; one that comprises a pretty impressive resumé in terms of their overall library, or catalogue of games. Think of a particular subject, whether it be a place, career or sport, and you can bet your bottom dollar that they have it covered. From soccer manager to role-playing hero and from ski resort owner to cruise liner company, all of your CEO aspirations can come true with Kairosoft. So, what’s my latest endeavour within the field of trying to be a grown up? Well, it’s being the owner of my very own Amusement Arcade. Now, what else could a gamer want? Well, read on as Pocket Arcade Story plays for the highest score upon the Nintendo Switch.

If you haven’t got it by now, and if not, then why not, this is a game developed and published by Kairosoft. If you’re familiar with their style and presentation, then Pocket Arcade Story runs along very similar lines; namely the development and expansion of your given role to produce the best product you possibly can. Or in simpler terms, a super-accessible management sim that is charming to look at and sublimely easy to play, yet contains a very addictive formula and gameplay loop that simply keeps you playing. If you’re not familiar with their style of gaming, then read above and read on! Despite the majority of their games following a similar template, they often contain something that is a little different in order to differentiate themselves from their previous works.

Pocket Arcade Story is no different as, not only do you develop and expand your very own arcade, but you also provide challenges for players in order to develop their skills, adjust difficulty levels or arcade games, host competitions and tournaments and last, but not least, even get to play the arcade games (well, at least one anyway). However, we’ll get onto all of that shortly, but as for the basic premise of the game, well it’s everything that you’d come to expect from a Kairosoft title. Development is the key here, as well as maintaining your bankroll. Make your arcade more appealing and the more money you make; the larger your funds, the more you can invest and ultimately, the more appealing your arcade to produce an invested gameplay loop. 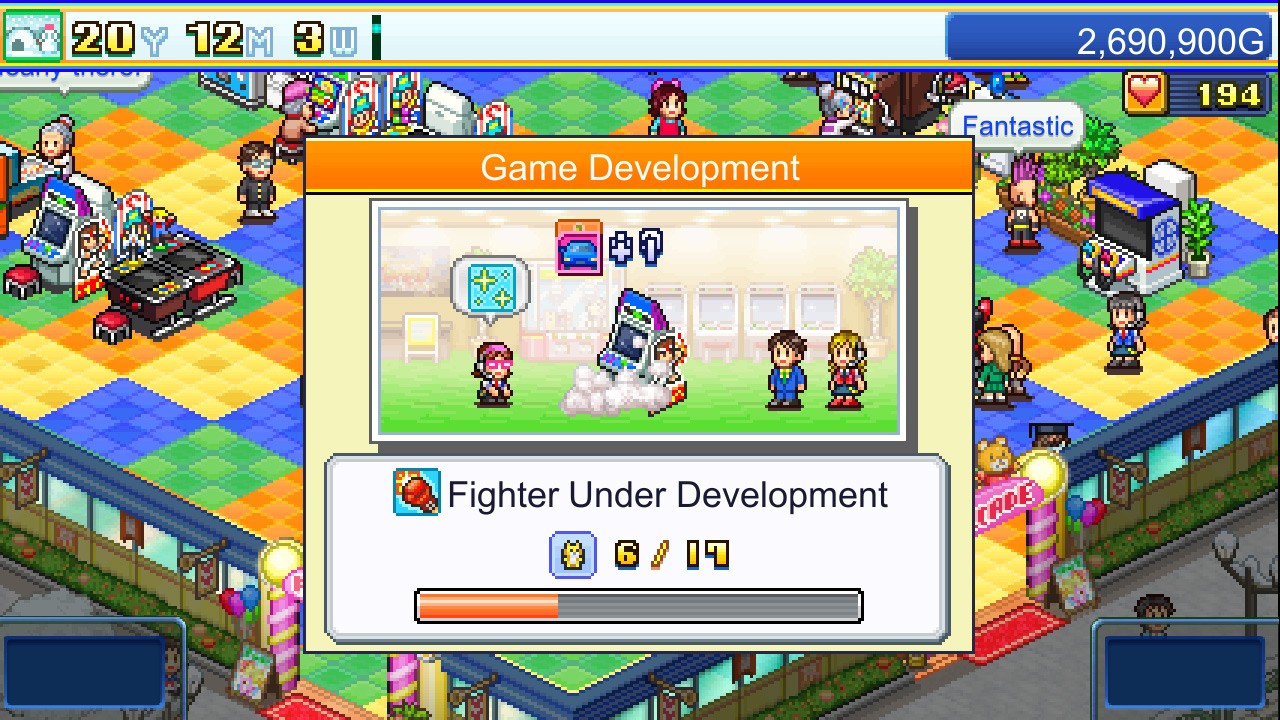 In order to achieve this, you need to purchase a variety of items in which to place in your arcade. From a side menu, selected with the R button, you can select from a range of arcade games and vending machines, as well as general items with which to decorate, such as plants to create a homely vibe or hand sanitisers to ensure you’re arcade is free of germs. The more attractive, or appealing you make your arcade, the more variety in people you’ll attract. This in turn generates a revenue which you can use to upgrade facilities, players and machines in order to create marketing. As you progress on these fronts, you then unlock further games, machines, items and facilities; even expanding floor space to allow more room in which to fit your new stock.

Variety is also an important aspect, making sure you have enough games in your arcade to appeal to the clientele you attract. As well as decorative features, you can also install new gaming cabinets that cater for fighters, shooters, platformers, claw grabbers, slot machines, Light-gun shooters and pinball, to name just a few. Each cabinet, or game, can also be fine tuned, making them easier or more difficult to play or win prizes from. As you expand on your variety of games on offer, you can run in-house, competitive events. This in turn adds a boost to customer skill bases, attracts friendships and prepares gamers for more ‘national’ competitions. Staff also play a part within the game, as you can employ people to keep the arcade clean, safe and secure; again, adding to the overall appeal.

One nice addition to this specific game though, comes in the form of competitive play, in which you pick someone from your arcade to represent you and they take part within a competition; usually revolving around the fighter game and something reminiscent of the old Street Fighter style of gaming. Here, you play a more interactive role, as you determine when to perform combos, strike heavy blows and defend against your opponent. It’s only a limited style of play, as you don’t control the movement of your on-screen characters, but it does provide a distraction of sorts. Obviously, by winning such competitions, again, increases your marketing campaign and popularity. 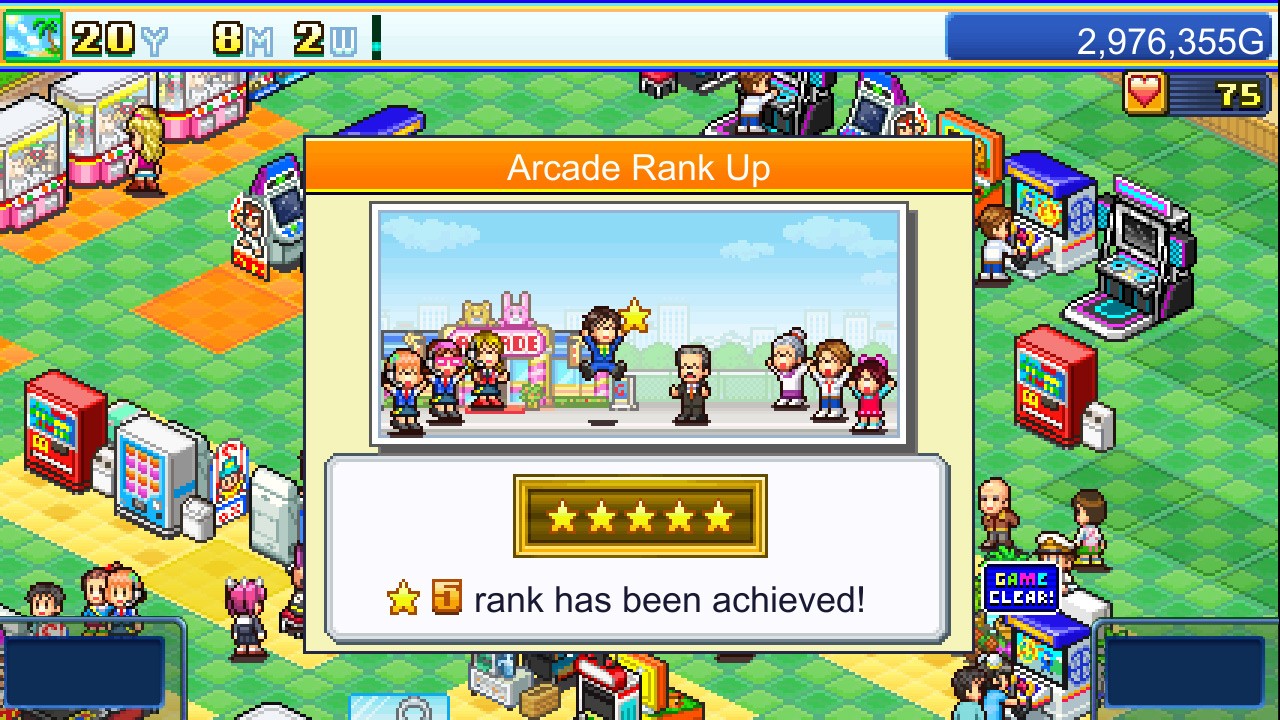 All of the mechanics within Pocket Arcade Story play in a similar style to other Kairosoft titles; making them instantly familiar if you’ve played their previous games. However, despite following similar blueprints, their level of engagement and enjoyment can vary from game to game; largely depending on subject matter or the execution of their style. In the past, I’ve played some truly engaging, exciting and addictive Kairosoft games. Unfortunately, though, Pocket Arcade Story wasn’t to be one of those, which was hugely disappointing to me, as I was expecting its subject matter to be one of the best. Everything here felt slower; its pacing, its level of development and overall, its level of gameplay. Despite managing, developing and marketing successfully, nothing I unlocked or created ever felt special, or in particular, ever felt that I was actually driving the game forward.

Levelling up characters, attracting new people, buying new arcade machines or even entering competitions, never felt rewarding as much as progress does in other Kairosoft games. I don’t know if it was just me, maybe I’ve played too many now, but that same level of excitement and addictiveness just wasn’t there this time around. Personally though, I think it’s more down to the changes made in-game that don’t dramatically change the face of the game overall. Sure, I can develop games, bolster player skills and purchase new facilities, but despite this, nothing changed in appearance, no big event brought anything new and at the end of the day, it was still just me and my arcade.

Overall, Pocket Arcade Story is everything you’d expect from Kairosoft. Its management is easily accessible to all and never complicated and the general gameplay loop does contain that Kairosoft charm. Despite adding some new additions, such as certain development techniques in creating gaming nights and player skills, as well as an interactive element in playing a fighting game, the overall package just felt a little too redundant to be exciting. Progression felt slow and meaningless; investment was never rewarding, at least not in a way that I’ve become accustomed to with Kairosoft. Whatever I tried to change, everything just felt the same and I think that’s it’s here where the problem lies. It’s still a very playable game. It just isn’t Kairosoft’s best. Saying that though, if running your own arcade appeals to you, then I’m sure you’ll find fun and excitement here. For me though, especially when compared to previous titles, this was an arcade that felt distinctly average.

Pocket Arcade Story follows the same formula of other Kairosoft games, but slow progress and unfulfilling rewards pull the plug on its levels of investment.