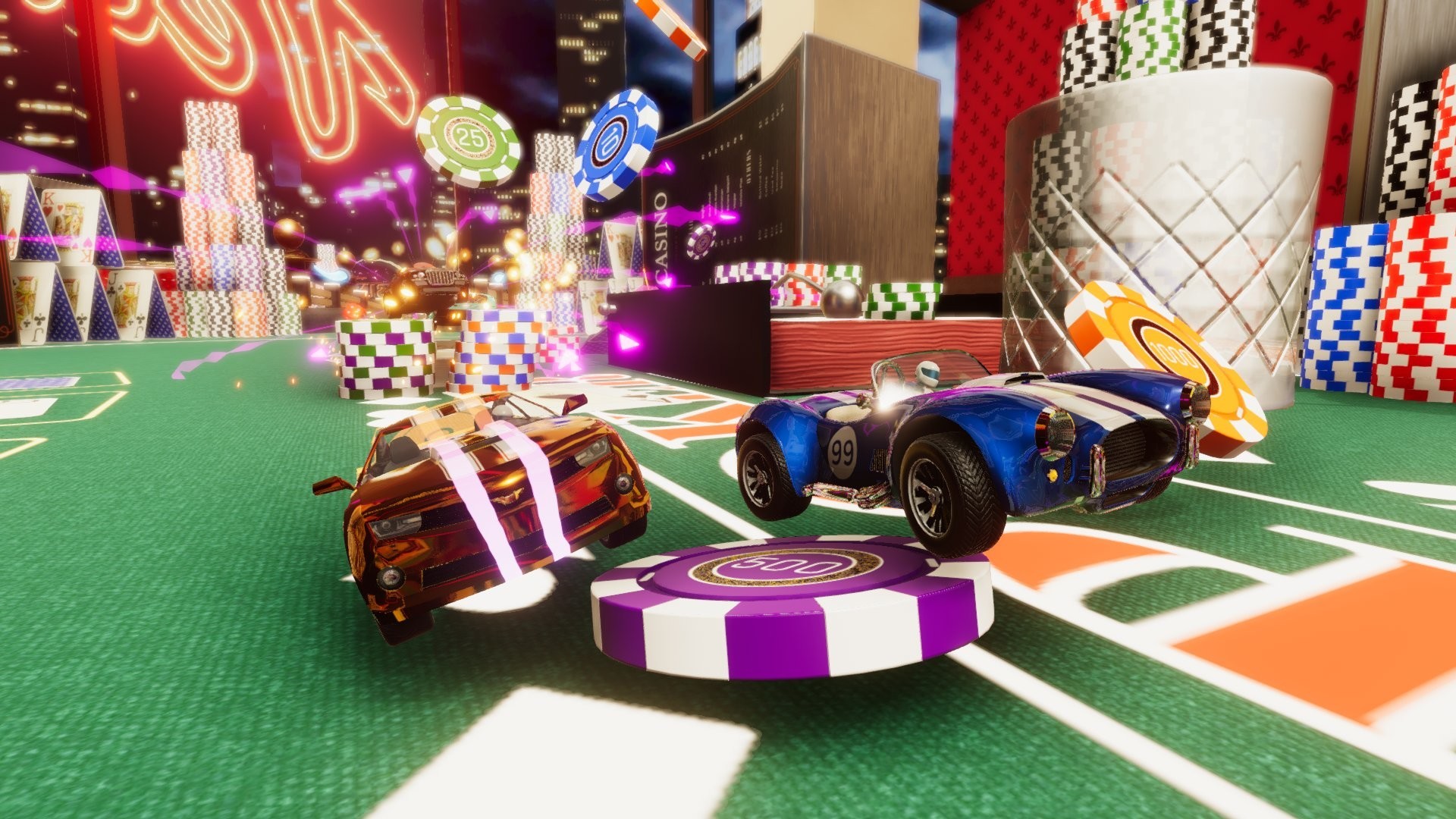 Super Toy Cars 2 is developed and published by Eclipse Games and comes out off the back of the first instalment back in 2015. I grew up playing the Micro Machines titles on the Sega Mega Drive, so when I see racing games that appear a bit wacky and out of the ordinary, I can’t help but dive in and give it a blast. The last Micro Machines rehash is three years ago now and whilst it was a perfect dose of nostalgia it lacked longevity and wasn’t supported after launch much.

In this past year, especially on Xbox One, there appears to be indie games launching every single day on the system and picking one that stands out is often difficult as there are so many. I was intrigued to see whether Super Toy Cars 2 could strengthen from the first title which had mixed reviews and hold my attention. I don’t know what it is with me and racing games, but it’s always the first thing I look at and that’s the amount of tracks or courses. Here in Super Toy Cars 2, I was surprised to see a fair few here; there are sixteen in total all of which vary in location.

The locations could be a kids bedroom, an American diner or even a music studio. The imagination of the courses I couldn’t fault and I couldn’t help but wonder whether they have given themselves too much of a job with the level design. It plays out how you would imagine, in the fact that you are driving across the surfaces of, say, the tables of the American diner for instance. Along these courses there can be various obstacles to manoeuvre around such as a sausage, salt and pepper shakers or a stray cup.

Whilst the imagination and variety of the courses was great, it all depends whether it blends with the gameplay. This always starts with vehicle handling on a racing game and as you’d expect, there is a bunch of vehicles to choose from here. The vehicles all have individual pros and cons and statistics to observe. I felt like some handled really well and comfortably and others were extremely difficult to steer around corners without humping into things. The cars are separated into classes and this ties into the single player career mode.

Career mode consists of 12 cups in total with certain restrictions on the class of car type for those races. Each tournament contains four events which can be races or other encounters as there is more than just racing here. The aim is obviously to win these events and win the prize money you will be rewarded with for winning. The experience you gain through the career will additionally unlock more vehicles, cosmetics for the cars and more events. You can use the currency to spruce up your rides or purchase additional cars. There is an option to drift around corners with the vehicles which, after getting used to this, felt really fun. But if you’re in one of the vehicles that handles poorly then forget it. It does become extremely frustrating in that respect.

I mentioned that there is more than just racing, so what does that actually mean? There are 7 different events in Super Toy Cars 2 which will have you not only fight to place in first but by using power-ups to try and throw your opponents off course. Successful hits with these power-ups cause damage and can make their vehicles explode. When this happens there is a slow motion feature which shows off the destruction as it happens which was a nice touch.

The modes are fairly simplistic and easy to understand. There is clean race which is just a standard race with no power ups involved. Death Race is a battle for survival as once you are destroyed the race is over for you or the opponent whoever gets peppered. There is elimination, time trial and destruction also. Destruction gives you a limited timer and the aim is to destroy as many cars as you can, each time you destroy one you gain points and additional time. The last mode is pretty much a destruction derby style event where parts of the courses are sectioned off. The objective here is uncomplicated, just smash each other up like a mad game of dodgems.

All of these modes can be played on the same screen with friends and family locally. AI bots fill the remaining slots to make it a full event. There is online multiplayer here. but it’s restricted to standard racing which I’m not going to lie, was really disappointing. Online multiplayer is always fantastic in games and a great way to play with your friends or random people. But to not add in the best parts of your game was a bit confusing to say the least.

What I found interesting was the soundtrack which almost appeared like radio stations. It wasn’t just cheesy tacky music like you’d see in this genre. There was a variance of music to suit all tastes and you could choose to skip or turn certain songs or genres off. This was a strong point of the game and I’m going to move onto something fairly weak within the structure of this title now.

The graphics were an absolute eyesore here. I’m talking Xbox 360 arcade game of 2007 style here. It appeared blurry a lot of the time, unfinished and unpolished and I just felt like it hadn’t moved on at all from its previous title. Five years down the line you’d hope the graphics would have improved not gone downhill. It’s a real shame because the mechanics, the ideas and the variety along with the licensed soundtrack tag the game together really nicely. And the lacklustre graphics and visuals which really do spoil it a bit, along with an almost non existent online multiplayer feature. It just really sent the whole experience off course very quickly. Frustratingly I can see inside the developers minds with this title and whether it’s lack of time and rushing this out, not enough budget or people working on the game I’m not sure. But this could have been excellent with improved visuals and a competent progressive ranked online multiplayer.

I wouldn’t say this is one to avoid though, there can be fun had here if you’re simply looking for a casual game to play alone or with friends at home. There is enough gameplay here to smash the achievements out on Xbox One in around ten hours. Unfortunately though, once you’ve ticked all of this off it leaves you with nothing else to do other than revisit it again or play locally with friends or family. I do hope that Eclipse Games come back with a patch to include the other modes into the online multiplayer, as it’s something I’d return for and would increase the longevity.

Super Toy Cars 2 has the mechanics to be a really fun multiplayer game but falls short in the graphics and online multiplayer department.