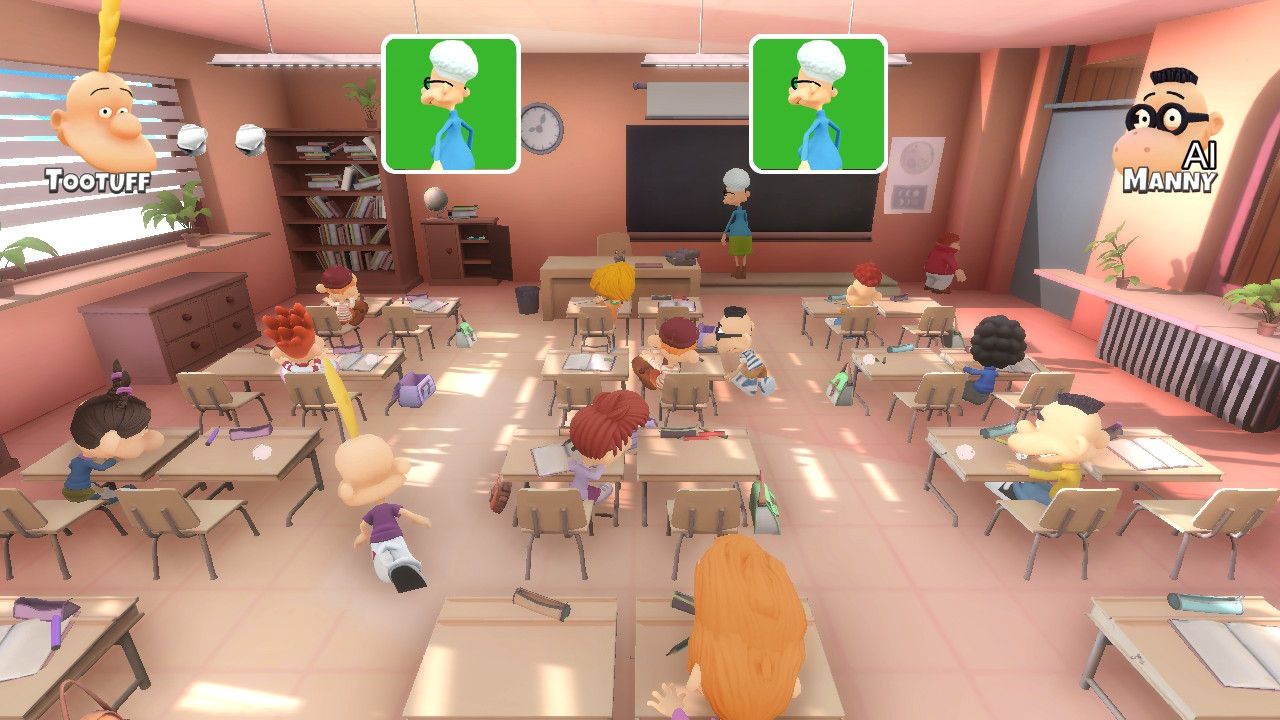 Titeuf, or Tootuff as he known as in English, is a Swiss comic book character who was created by Zep in 1992 for European audiences. Since his inception, his character has also been adapted into an animated television series in 2001 and, a decade later, made it onto the big screen. Later, in 2004, he also became the star of a video game in Titeuf: Mega Compet; again, a title made specifically for European audiences and more importantly, the French. Now, out of nowhere and fifteen years later, this original title has been given a remake and repackaged, as Mega Party: A Tootuff Adventure animates a release upon the Nintendo Switch.

Developed by Microids and published through Bolio Studios, this mad-cap adventure follows the exploits of Tootuff and his friends. Through the game’s campaign story, you follow the trials and tribulations of the young schoolboy who, after watching a documentary about cloning, goes on a rampage of doing crazy things and playing silly games in order to make himself look less appealing to the cloners. Based across three chapters, the campaign follows Tootuff through a day at school, away on a trip to a snowy ski resort and around the fun of the county fair. From a third-person perspective, you talk to your friend, Hugo and fellow pupils within the confines of the school playground, around the streets of your local neighbourhood or amongst the snow-filled avenues and colourful stands of the resort and fair, as well as take part in a series of mini-games and run havoc in the streets as you cause mayhem.

You begin the campaign at school, where through the help of your friends, take on a series of challenges to make yourself look stupid and unsuitable for cloning purposes. You start by choosing a character with whom to play, so you don’t necessarily have to play as Tootuff himself, and also pick a rival with which to play against. In a small, but semi-opened world, you interact with a variety of NPCs until you are pointed in the direction of your friend, Hugo, who then instructs you on what you need to do or what your next task should be. These tasks take the form of a series of mini-games. Once all the mini-games have been completed, you can then advance onto the next chapter. 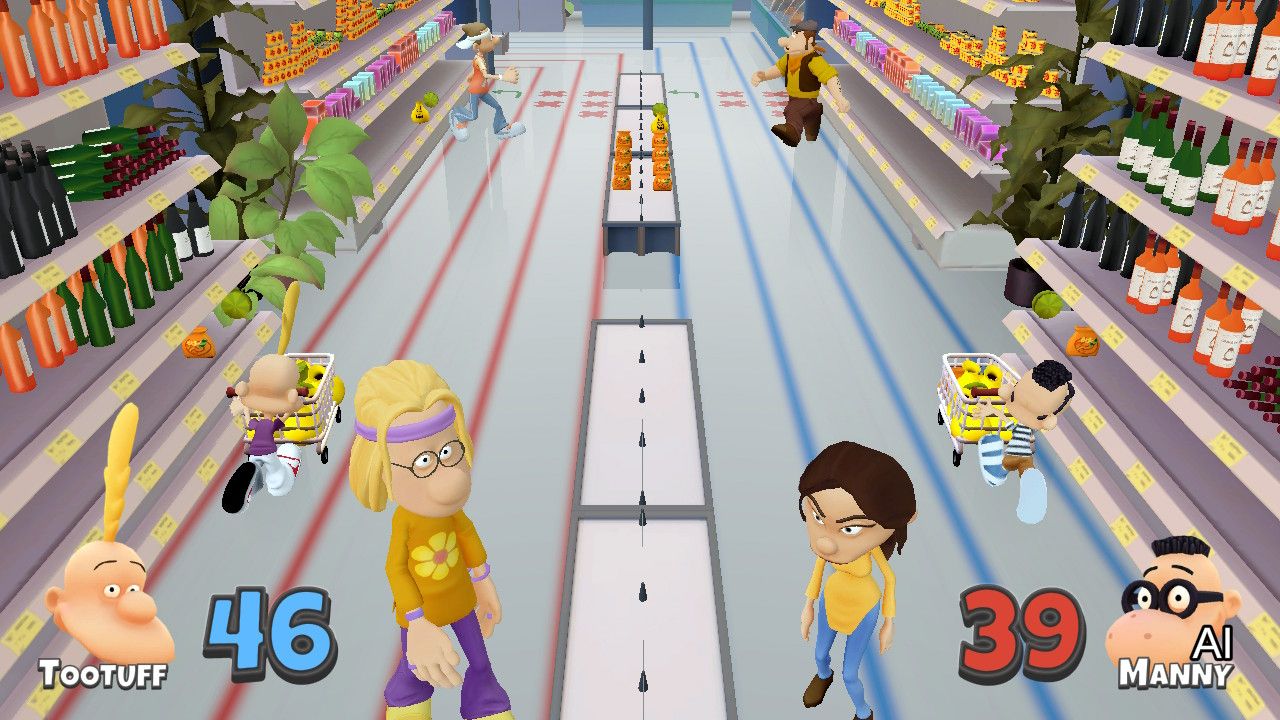 However, you also need to successful at the challenges and win against the competition of your rival. Fail and you don’t look as stupid as you were hoping. By competing in the mini-games, you fill up a stupidity meter, with the overall winner being the person who completely fills their gauge. As well as completing a series of games, you also have to perform a variety of tasks in order to disrupt the neighbourhood. By completing all of these tasks, you then unlock further playable characters that can be used in future. The campaign can be played solo, or with a friend in two-player, local multiplayer mayhem. With three chapters and over forty mini games, as well as a host of tasks, there’s plenty of trouble-making mayhem and humour to keep you and friends amused throughout its playthrough.

The mini-games themselves come in a variety of styles and, for the most, are actually pretty well presented and quite fun to play. One minute, you’re trying not to barf on a roundabout, then the next you’re spitting from a balcony on passers-by below, before parping out your pants to certain vegetables. It really is mad-cap mayhem. Between games, you run around the playground of your school or break out onto the streets, where you’re tasked with defacing posters, ringing doorbells and running away or disrupting the day-to-day lives of the people within your neighbourhood.

In terms of gameplay and controls, everything here runs along a simple and easy to use scheme, usually involving some dodging with the left joy-con, button mashing to fill a gauge or timing jumps to avoid any obstacles within your path. Despite its limited narrative and exploration aspects, the real fun of this title lies within its series of mini-games. Played with friends, it’s a laugh-a-minute experience and on those terms, presents one of the best party experiences out there. However, there are a handful of questionable games that either don’t make sense or are too easy to figure out. For solo players, the AI presents a good challenge, even on easy settings, although it doesn’t represent the same level of all-out-fun that you get from playing locally with other players. 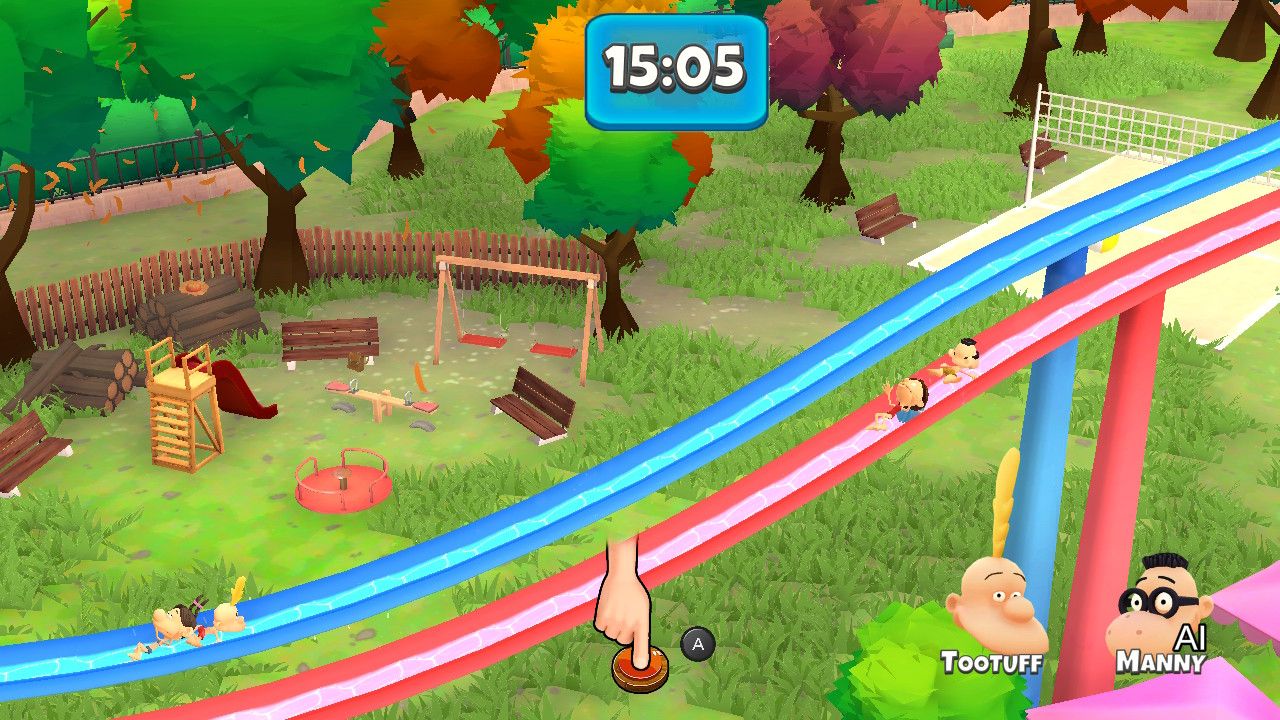 Once the campaign has been completed, you can then replay them through a series of other game modes. Duels allow you to pick from a series of mini games in a duelling competition for up 2 players or against an AI opponent. The real jewel in the crown though, lies with the Mega Duels and Duel of Death game modes, all of which cater for up to four players locally. The first of these allows you to play through a custom made list of games in an all out competition of pure mayhem. Duel of Death though, presents a tournament style game that goes through all of the available mini games, with the winner of the most games being the overall champion. One last game mode, Mega Ace, presents a variation of play styles that alters a number of inputs through three categories: One button, directional inputs only and a combination of both to finish off.

Although the campaign, either played solo or with a friend, holds enough to keep you interested, it’s also a mode that probably won’t be re-visited once completed. This is largely down to a lacklustre presentation in its overall narrative and in all honesty, once all of the mini-games have been unlocked, its other game modes provide much more fun and variety and will, ultimately, produce the more long-term investment; especially as a four-player, local party game. When played in this style, the game absolutely excels and easily becomes one the most entertaining party games that money can buy. However, it just doesn’t hold the same values when played any other way and despite being a ‘remake’, contains a very last-gen feel in its overall presentations.

Overall, Mega Party: A Tootuff Adventure is a fun party game when played locally, but as a solo experience, produces a more lacklustre feel. Its campaign is merely average, although it does warrant a playthrough in order to attain all of the game’s unlockables, but once completed, won’t warrant a return. It’s real levels of playability though, lie in its other game modes that allows you and up to three others to play some hilariously, mad-cap and fun mini-games. There’s a nice variety of game-styles hidden within, from dodging, running, jumping and shooting in a series of games that can contain an abundance of toilet humour. It may be a bit too distasteful for younger kids, but young teens and adults will revel in its, often borderline, comedic values. It may not be visually outstanding or even current gen in its presentation, but what it does have is the ability to bring people together; all of whom I can guarantee will either be disgusted or just simply cry with laughter.

Mega Party: A Tootuff Adventure excels at being a four-player, local party game, but for the rest of it, it’s simply tootuff to tell.