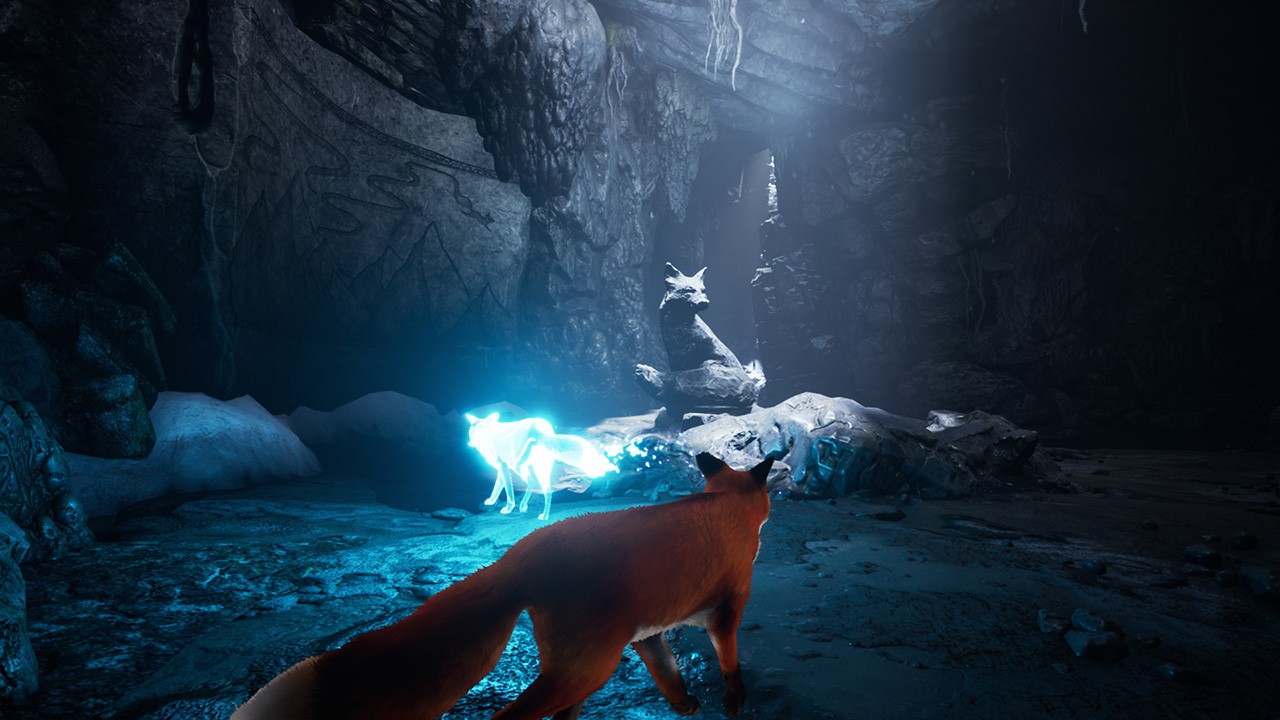 At some point within our lives, we’ll all make a journey of some sort or another, whether it be a personal conquest, an adventurous holiday or a simple jaunt with which to take in the natural beauty that surrounds us within the world. The same can also be applied to video games, with some titles giving us an edge-of-your-seat journey through its impressive set-pieces and adrenaline-fuelled stories, whilst others offer us a more, relaxed pace, with soft melodies, serene landscapes and the omission of any urgency. Whatever its style, any of these digital excursions that we undertake offer a nice break from the norm, whether it be from real-life, a change of pace from being an adrenaline-junkie or a thrill ride into oblivion. It’s a premise that is perfectly encapsulated in Infuse Studio’s latest release, as Spirit from the North explores a venture onto the Nintendo Switch.

You play the role of a fox who finds themselves scouring the lands of the Northern Hemisphere. One day, the fox comes across a formation of stones, as well as disfigurement in the sky, which they duly investigate. Its mysterious forms lead the way to another fox, one that takes the form of a spirit guide and is the guardian of the Northern Lights. Under her guiding light, you follow the spirit until, eventually, you join together and become infused with her powers. From here, you then embark on a journey of discovery, as the story opens up on a voyage of a long, lost civilisation and the fate that befell them, as well as investigating a corruption of the land that is taking place around you; leaving you no choice but to try and push back its advances and save the serenity of Mother Nature.

This slow-paced adventure places you within the wilderness of the North, with no narrative to push you forward, set the scene or give you a reasoning of being. You simply find yourself within the world and that’s it. The rest of it is up to you to discover. The game never holds your hand or pushes you in a direction. Exploration is the key here, as you begin to unravel the mysteries of the land by traversing over rock, through water and over fields in order to unlock and solve a series of environmental puzzles, as well as collect a series of staffs in order to reunite a lost civilisation and put their souls to rest. It’s an enchanting and compelling journey, despite its pacing. What may start off as a journey into nothing, soon becomes clear as you progress deeper into its landscapes. Stick with it and the reward pays off. 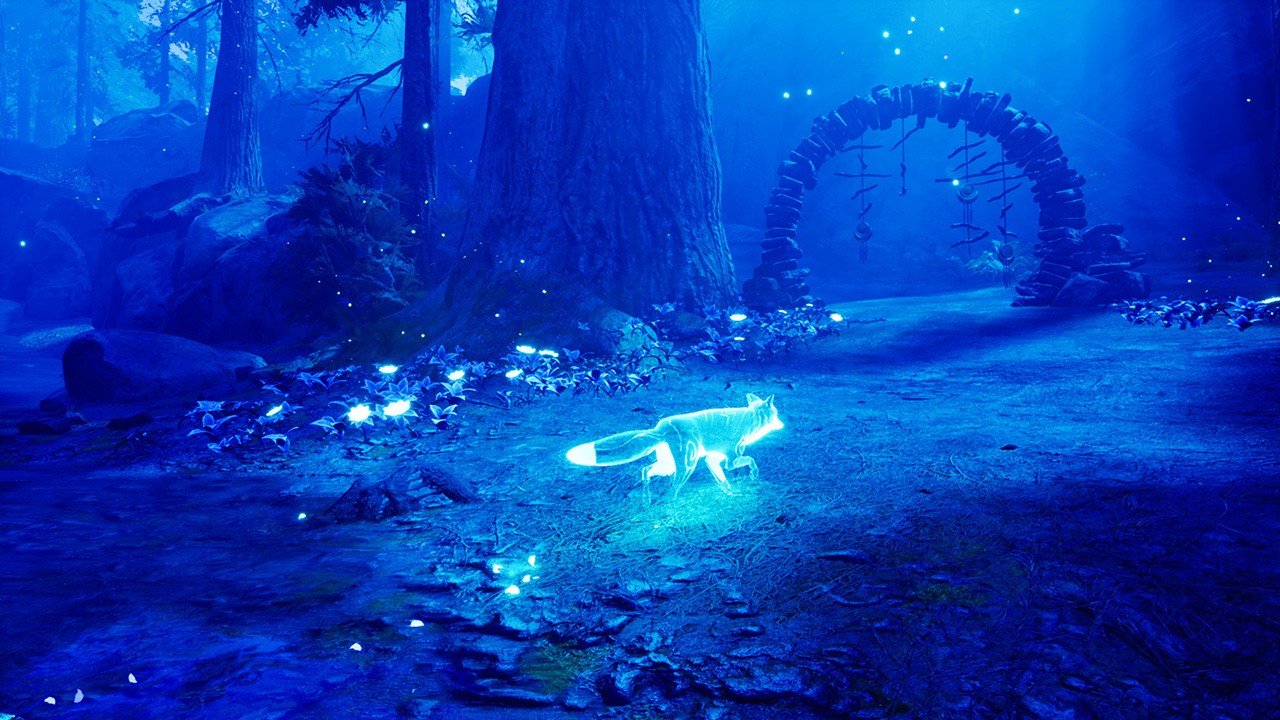 Although the game holds no narrative or instructions, it does tell a story through a series of strange markings  found on rocks or scratched into the walls of the caves. However, it does provide some subtle hints, especially during the early sections of the game with some on-screen prompts that allow you to dash, wag your tail, bark and jump through the tall grasses of the cold plains. You’ll journey across a series of environments, from bleak expanses and snow-filled caverns, to rocky cliffs and lush grass-filled fields. Each of the areas covers quite an expansive area, one that needs to be explored. Although the majority of your time will lead to nothing, you’ll sometimes find useful locations needed to unlock puzzles, or come across ancient staffs that need to picked up and reunited with their spiritual owners.

At first, nothing will hold any meaning to you. What the strange symbols mean or why you’re collecting staffs and resurrecting spirits, but as you progress further and explore ruins and structures, the game slowly begins to reveal itself to you, culminating in an end-game that calmly makes sense. It’s a journey that may be too slow for some, but perseverance will bring an appreciation for the time and effort you put into it. Some stunning sceneries and beautiful locations do help to push you forward, although some textures can be a bit muddy in sections, but in the overall context of the whole environment, Infuse have done a sterling job at creating some of the most breath-taking sights I have ever witnessed on the Switch. 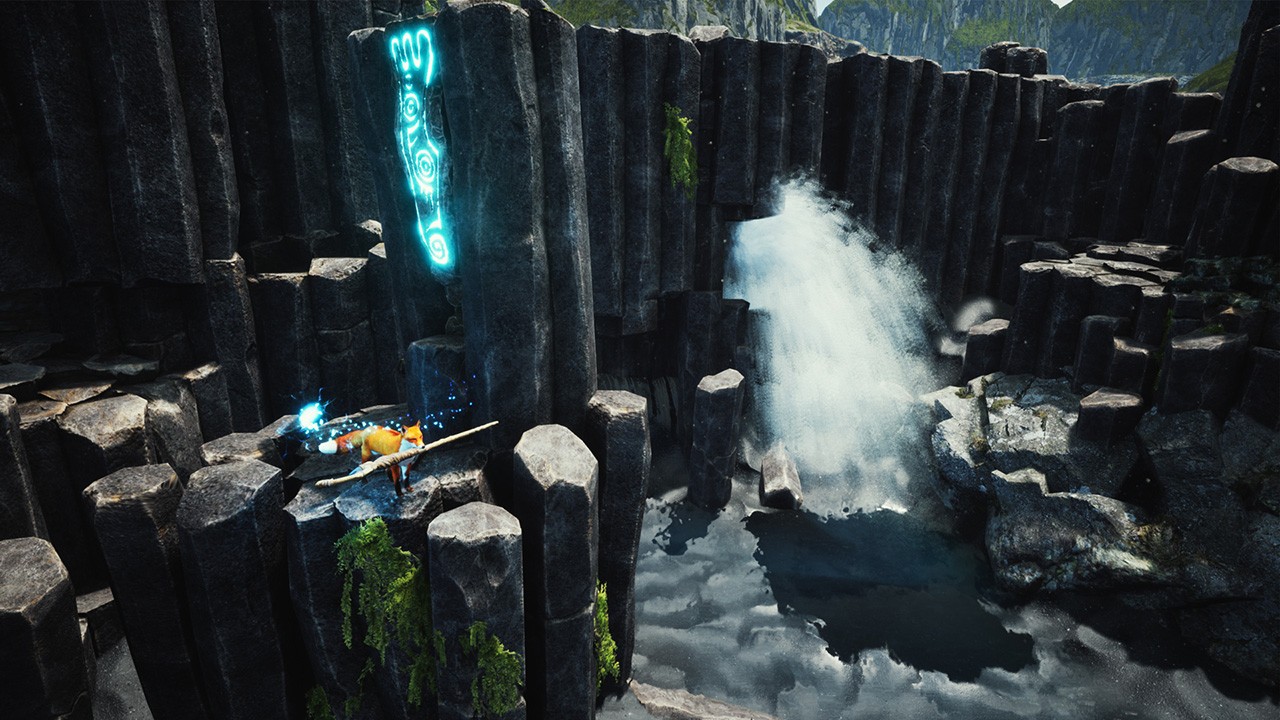 For the most part, the game runs superbly from a technical viewpoint, with only a couple of environmental hiccups witnessed first hand, but these were so sparse and few and far between, that they never frustrated. The game also involves a few sections that require some platforming elements. Although the controls of your fox are mainly intuitive, some of these more intricate areas can take a bit of getting used to and sometimes, requires an element of luck to traverse them. You may come unstuck a couple of times, but eventually you’ll work through it and come out unscathed the other side and raring to see what mysteries lie ahead of you. However, at times, the pacing of the fox can be a little sluggish, especially when swimming and you’ll often find yourself urging him on, just to make it to the other side in good time.

Although these sections can kill the flow of the game at times, the majority of your time will be a pleasant experience. The main protagonist, your fox, is cute and charming, as is the spiritual incarnation that journeys with you. If you love all things wildlife, or foxes in particular, then you’ll instantly fall in love with this game. Its animations and behaviours perfectly encapsulate the grace and darling of such majestic creatures. The sceneries too, hold some nice features such as waving grasslands that ripple like the calm waters, and even the water itself often looks inviting and trudging through snow clears a pathway that leaves a trail behind it.

Overall, Spirit of the North is a charming game that offers a nice rest bite from the more demanding games of modern times. Its slow pacing suits a casual style, or fully compliments a need for relaxation at the end of a stressful day. There’s nothing frustrating here, just a peaceful journey through a charming narrative of voyage and discovery; all within the charming playfulness of an inquisitive fox. It’s also an emotional piece, not to the point of sadness, but in the the beauty that conveys itself throughout the lush landscapes, haunting melodies and situations that the fox may find itself. While it may  not be for everyone, its slow pace does reward perseverance and makes for a compelling journey that reveals itself to you through prolonged play. It’s a long journey and one of self-discovery, but if you’re patient enough, it’s well worth sticking with and is a title that will remain with you for a long time to come.

Spirit of the North Review

Spirit of the North is a charming game that offers a nice rest bite from the more demanding games of modern times.