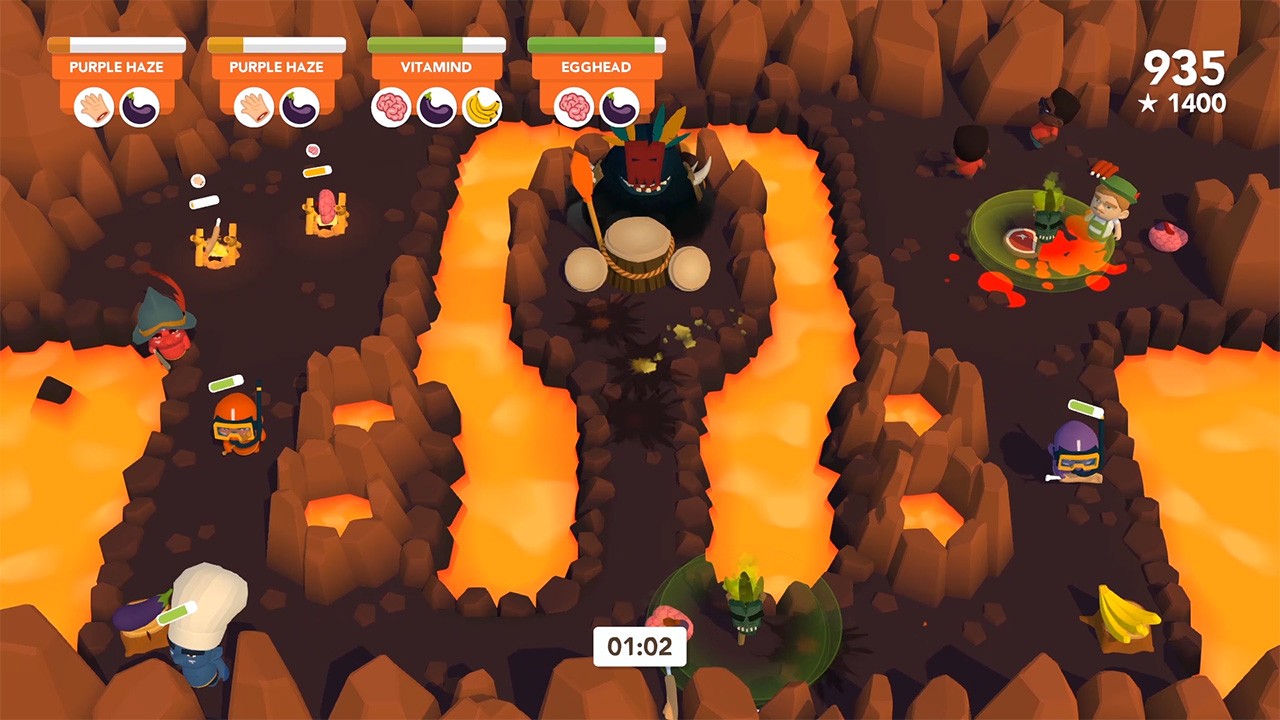 Cannibal Cuisine pits you as an indigenous tribe on Cannibal Island. One day the local mountain deities become angry and demand you feed them tasty meats! There’s no chianti or flava beans here Clarice, actually there’s a surprising lack of Liver too come to think of it… But with other similar games already on the market, how does Cannibal Cuisine separate itself from the pack?

As soon as you start to play the game comparisons will be made to the “Overcooked” franchise, and it’s a fair comparison to make. The game’s art style is similar and the main aim of the game is essentially the same, prepare dishes to please the island deities. Where the games differ however is what separates the adults from the children. This last point is an almost literal one, with the game receiving a PEGI 16 for its strong violence.

In order to cook you must assemble ingredients, which are scattered around the map, and not surprisingly, the island tourists who wander into your game map. Killing the tourist provides you with the meat with which to cook a tasty treat, combining it with other ingredients to make dishes to order. Of course cooking takes time, and this creates the perfect dish, and hence the perfect score. But leave it much longer and the score you receive drops. Feed the wrong food and the island god will shower down molten punishment which slows you down further. Add to that the tourists fight back, draining your health, and the ability to fall into streams and other obstacles and you have plenty to be thinking about in order to rack up the most points in the least time. 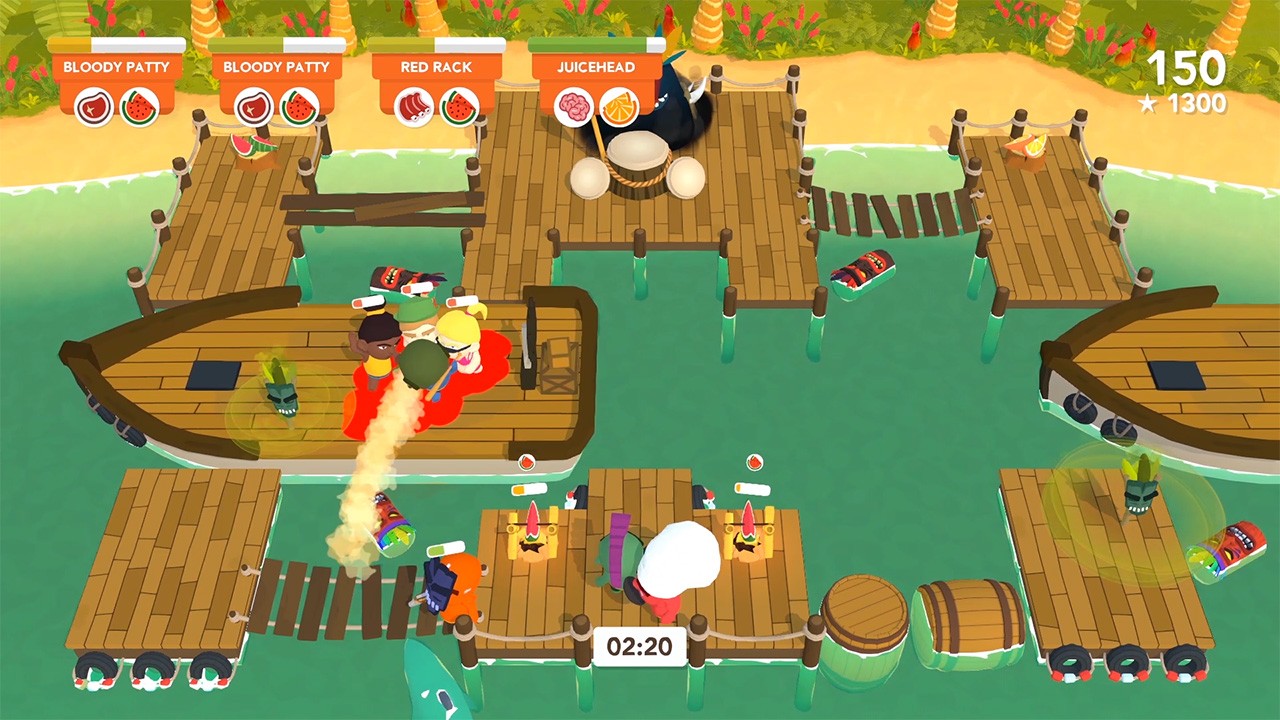 The main game can, and should, be played in a multiplayer format. Adding players to the game means dividing up the roles and racking up points more easily in the same time. There is also a versus mode where players can go up against each other in teams. There is no facility for online multiplayer at the time of release, but this would certainly be a beneficial feature of the game.

Each character has the ability to change appearance (adding a change in hat or hair and the character’s colour) as well as selecting their weapon of choice and their special move. This can vary across a number of different skills including but not limited to boosting, fire breathing to cook food faster/away from a skewer, and the ability to generate a healing totem. Finally, there are a number of levels in each zone, each level having three star achievements to aim for which correspond to increasing point totals which adds to replayability and challenge.

The game is rather bland in single person mode. Working through levels feels more like a chore than a game after a while, due to the repetitive nature of levels reskinned in different zones. The game was designed as a couch based local multiplayer and this is where it shines. Passing a Joycon to the wife, we worked through a few levels to test out the features and found that playful criticising of ruining someones skewer or trying to manage the other’s strategy was an amusing distraction during the current lockdown protocols. This is where the switch version has an upper hand, and an Achilie’s heel here. The ability to pass a Joycon to, presumably friends sitting next to you (I am not condoning passing expensive gaming equipment to complete strangers…), is quick easy and generates a very quick, fun environment that would easily form part of a video game night with friends. But the Joycons are not great when playing this game due to some issues with precision of the analogue controls. So many times I would be rushing to a skewer over a barrel or a bridge and would find myself suddenly in the drink. 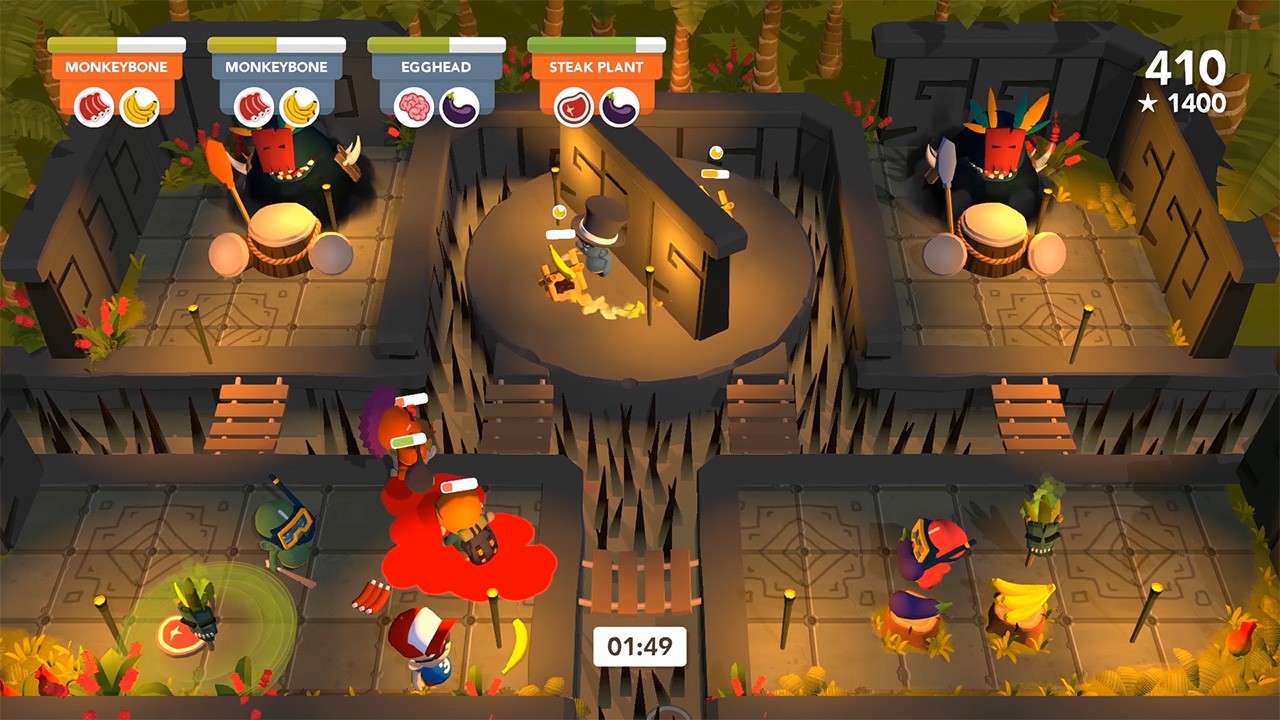 The other criticism found was the progression system seemed a little too challenging at times. Early on we found ourselves having to replay levels for not meeting the one star criteria. Now I’m not saying for one minute I am a pro gamer, but it did get frustrating having to repeat levels when you didn’t reach the 1 star criteria. Other games still allow progression and build in the desire to improve through unlockable content, or having to reach a total to progress to the next zone to try and reduce this frustration at repeating levels. Some of this was compounded by not having much in the way of a tutorial, specifically for the points system and how the screen is organised etc.

Aesthetically, the game has a relatively well polished chibi/cartoon character models with a fair amount of details added to background and environment art to ensure the player is immersed in the environment. Combined with a thematically relevant, but easily forgettable soundtrack and you have a game that looks and feels like similar titles on the market with an island theme.

Overall, this is a fun little distraction, and is slightly cheaper than it’s more well known competitor. However, there is a serious consideration to be made between the two. If budget is an issue, then this is a fantastic compromise that will provide a very similar experience for fans of couch co-op games. If you already own similar titles then this will be an easy game to pick up and play and for the most part will feel like additional DLC, albeit with a few technical differences.

Cannibal Cuisine is an interesting and humorous twist on the beloved overcooked franchise. The concept is simple to pick up but difficult to master, with three levels of challenge added to each level.