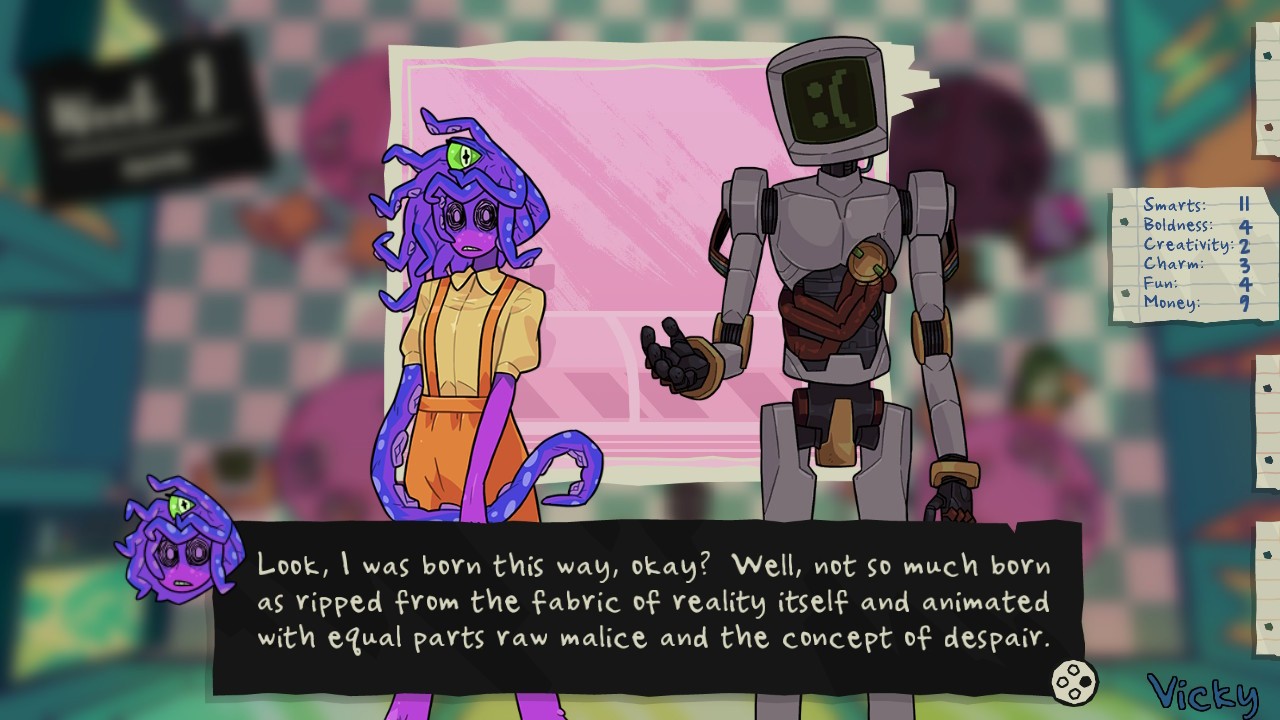 I tip my hat to the developers of Monster Prom XXL for, subversively, saying what many people already knew if they survived past the age of 18: high school relationships are rough, and getting dates is like a competition. I generally don’t have fond memories of my high school days, and my thoughts on dating, on prom and on even trying to establish a relationship more meaningful than a casual acquaintanceship are pretty harsh and bleak. But that’s especially what prom always felt like: a mad scramble for people who were single, trying desperately to properly get the temperature of the relationship they had with someone and calculating risk to jeopardise that with an invitation to a very important dance. I thank God every single day that I was born when I was and finished high school before promposals became a thing, because rejection is bad enough, but rejection after spending time and money on an elaborate presentation is devastating. Thankfully, this isn’t a game about laying awake at night and replaying the rejections you experienced in your glory days: this is about getting that Medusa-adjacent chick to go to the prom with you.

In Monster Prom XXL, there are only three short weeks left until the Senior High Prom, the last big huzzah before we all go our separate ways, find out that we really were just kids learning the most valuable lessons and punching the sky during a Simple Minds song. You, my dear teenager, need a date, and several of the most eligible school hotties are still going stag! However, in lieu of putting you in the archetypes of high school personas, you get to take those archetypes and apply them to classic and creative monsters of Western lore, from vampire hipsters and wolfman jocks to undyne hall queens and bookish Gorgons. You have one day and one night for each week, time where anything can happen based on a number of different factors. Will you attend class and get up your smarts? Hang out in gym class to perk your pecs? Haunt the library and get the nod of approval from other socially-defiant ghouls? Where oh where will you sit in the cafeteria, the most important pecking order location in all of high school? And if things aren’t looking your way, maybe it’s time to spend a bit of your pocket change to grab something useful from the school store. You never know what could change someone’s mind, for better or for worse! 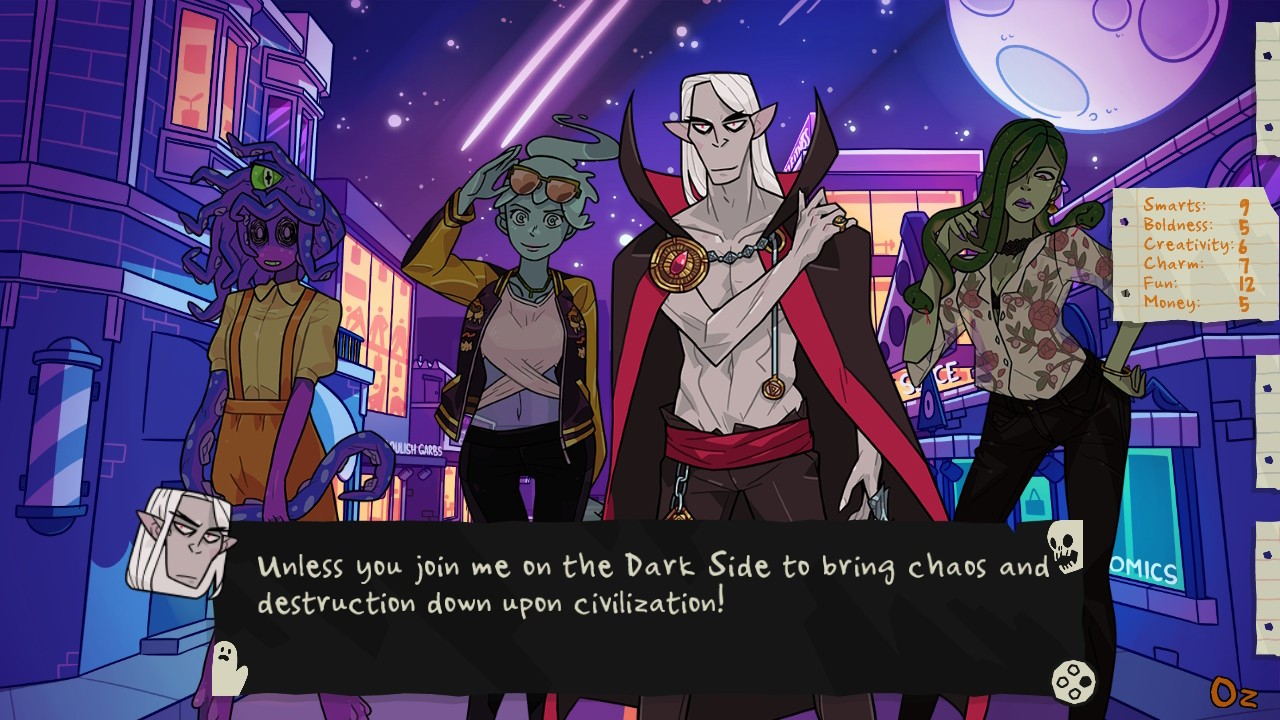 Monster Prom XXL is a culmination of the Steam version with all the DLC baked in, plus the convenience of the Switch to bring this multiplayer competitive dating simulation to the masses. Very good news: this can be played online, which is perfect since most of us can’t go grab a friend or invade their homes right now. You start off by taking a personality quiz a la Teen Beat magazine and finding out who amongst the potential monsters might be a perfect match. From there it’s a series of plays and parallel plays with choices and decisions that are made throughout the school week. It should be noted that, unlike many multiplayer competitive games, it’s totally possible for you all to play this game straight through, together, and not step on each other’s toes. If you’re more into harmony, then you can all chase after a different monster (gender roles do not apply here!) and just enjoy the experience together. Having said that, it’s so much more fun and gratifying when you and your friend are both chasing the bad-boy demon type and you want to see if they fall for you or them based off of seating (hurry to be the first to the right table!) and available items. Hell, even mixing up the order of play from each night is done democratically: the decision comes down to a question (which historical figure would win in a Pokemon battle?) that everyone votes upon to get the winner. Or you can just hit the random button, remove all players’ agency and have them be annoyed at you. Did that once. Do not recommend it.

Monster Prom XXL lives and dies by its writing and design. As far as gameplay goes, there really isn’t much to it: it’s like a flattened out visual novel with a few area choices as well as conversation choices. So it’s a damn good thing that you’re constantly being peppered with witticisms and a sarcastic, biting narrator to announce how everything is going. The. Game is aware how ludicrous the situation is, and absolutely thrives on the nonsense, the petty bickering, the inherent stupidity and the hilarious nature of these demons and beasts all trying to exist and live in a high school setting. For one particular game, I ended up buying a sheet from the school store that I wore like a ghost costume in several encounters. I was in tears as exactly ONE person saw through the disguise and said it was just Elliott in a sheet, and everyone else was working out the philosophy and reasoning that a ghost should manifest like this, if the ghost wanted to join their club, or if ghost dude was deeper than they anticipated. The person who saw through my disguise, however, was the monster I was pursuing for prom, and his rejection when I asked him was nothing if not expected. But hey, I still went for it, because it just added more fuel to the fire, and this thing burns HOT. 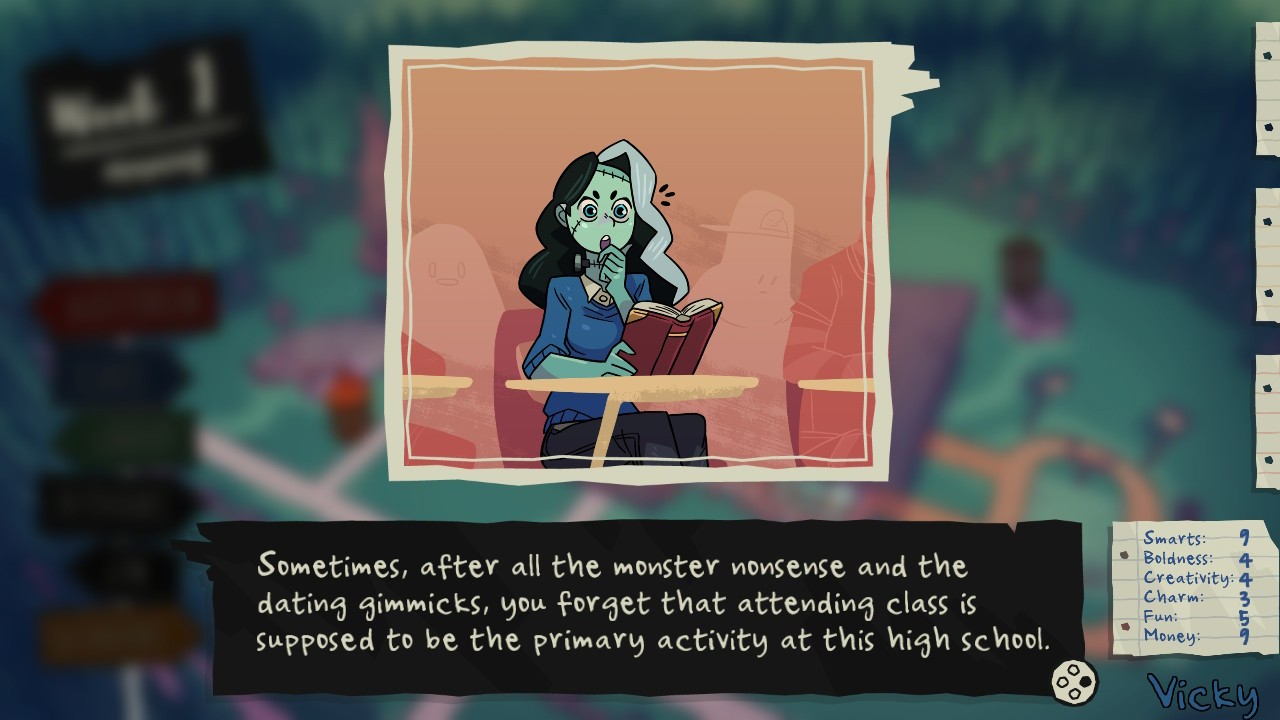 Monster Prom XXL is one of those games where, if you like a little of it, you’re going to LOVE a lot of it. The Second Term DLC is here for optional play if you get comfortable with the vanilla package, and it adds more romantic interests, more NPCS for interaction and a ton of new endings, which is insane because there are so many in the base game. With every playthrough, every win or loss, new things are unlocked and discovered for the ultimate in completionism. You have so many quips, clips, achievements and trophies to discover, and everything that you do is completely saturated in pop culture references, snarky inside jokes and sarcastic, clever writing to keep the whole ordeal feeling fresh and interesting. I did probably five games back-to-back in solo player mode, and I seriously didn’t have a repeated moment between them, which I thought was fantastic given that the game, on the surface, feels incredibly superficial. In actuality, Monster Prom XXL is one of those perfect “not for gamers” kind of games. You need to understand some base concepts of strategy and cunning, but this isn’t something where you’ll necessarily get an edge if you have over twenty hours logged in the game or what have you. Having fun with friends, understanding some fundamental clauses within the social hierarchy of school and taking wild, ridiculous risks in the name of love(?) are what keep the game moving and keep it exciting. Most importantly, having other players to compete against makes the replay value work.

Truth be told, I simply cannot recommend the game in a solo player endeavor unless you have already played the game previously, if that makes sense. Monster Prom XXL is going to be a perfect addition to players who are familiar with the game and want to take it to the next level in terms of completionism, branching out to non-PC gaming friends and those who are enthralled with the storytelling as is. For someone coming in cold turkey and alone, however, it’s sort of a boring and very one sided occasion that doesn’t really land well as a solitary enticement. I had so much fun playing online with others, and when I was left by myself to grind things out it just felt a bit dead in comparison. Which is a shame, because it’s some of the best livelihood in multiplayer, very comparable to having a good Jackbox play. Basically, if you know the territory, it’s worth double dipping to have it on a new console and have the versatility that comes with the Switch. If you’ve never been on a monster date before, however, you might find yourself getting stiffed.

It’s the Monster Mash meets 16 Candles in some of the most off kilter, haphazard and entertaining gameplay possible…as long as you have someone to play with.