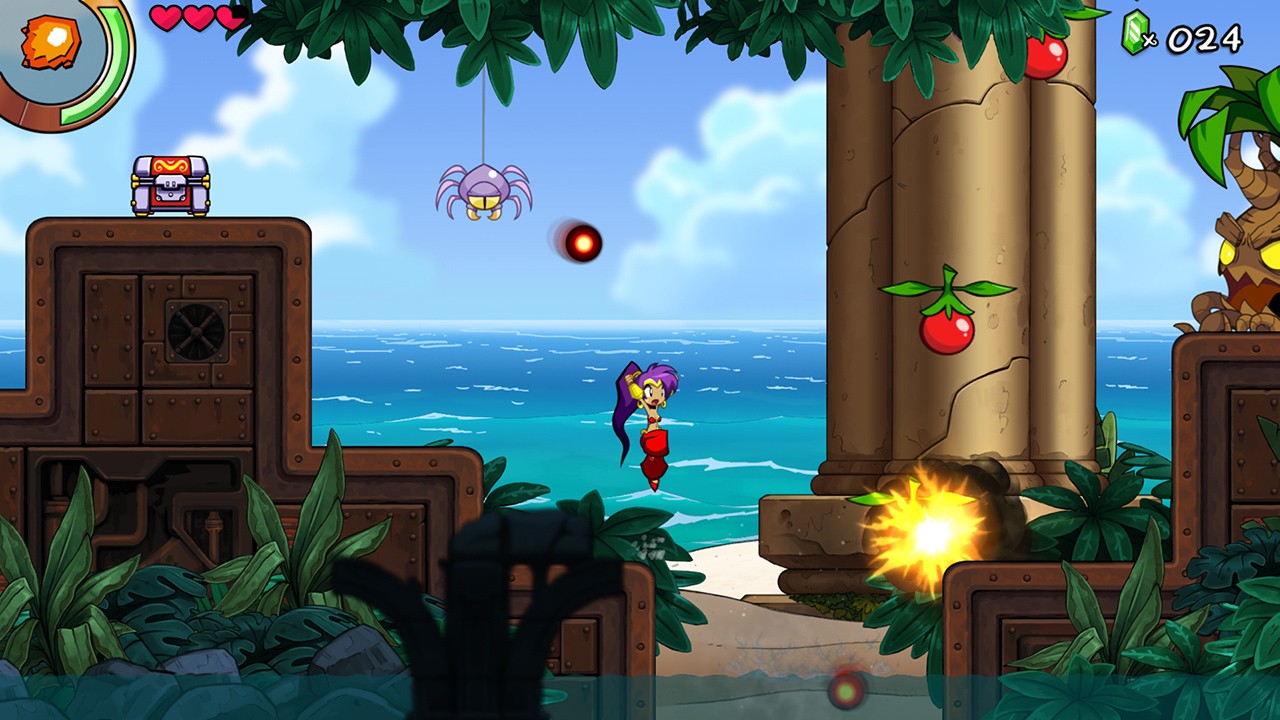 The Shantae series is some of my favorites on the Nintendo console, and I welcome each new entry with the same level of aplomb and minor trepidation each time. On the one hand, I know that I’m going to be pulled in by the presentation, the gameplay ideas and the fantastical enemies and characters. On the other, for whatever reason, I really do run out of steam with these games before they’re over. I think I just get frustrated and stuck at a certain point of the metrovania exploration, give up and acknowledge it was fun without getting all the way through. It happened with Half-Genie Hero, it happened with Pirate’s Curse and I was certain it was going to happen here. But it didn’t. It didn’t, and I’m so freaking glad because Shantae and the Seven Sirens is, bar none, the best in the series so far.

Shantae’s latest adventure takes her and her immediate entourage (Uncle, Bolo and Sky) off to Paradise Island, where Shantae has been invited to the Half-Genie Festival. As it turns out, there are multiple half-genies, and Shante is one of six that the Mayor has managed to contact and invite for this Festival. I guess the idea is to show how awesome half-genies are, and maybe to encourage genies to come back and, you know, copulate with humanity again. Shantae gets to meet and greet with some of these fabulous half-genies, and things are looking great until they go to do their big Festival performance, at which point everyone except Shantae promptly gets kidnapped under the cover of darkness. Shantae immediately sets off to find her fellow half-genies, discover the secret behind the festival, and also give the players a chance to find out why the title of the game is “Seven Sirens” and not “Four Other Half-Genies.”

While there generally isn’t a ton of leadup to the game getting underway, I appreciate that Shantae and the Seven Sirens dives into the plot of things immediately. You’re headed to Paradise Island with no preamble, and the discovery of the four other half genies takes but a moment. Then the kidnapping happens, and there’s no hemming or hawing or careful consideration on Shantae’s part. You dive in, and the player is expected to understand most of the basics at this point. Additionally, it’s just assumed you’ll figure out a lot of the key features of the game if you don’t already know them. You jump, you crawl, your hair is a dope whip weapon, you can use magic (if you can buy it), and the map will slowly unfold as time goes on and as you get new abilities. Part of the big appeal of this latest game is the variety in which your new abilities appear, and the level of coolness that goes along with them. 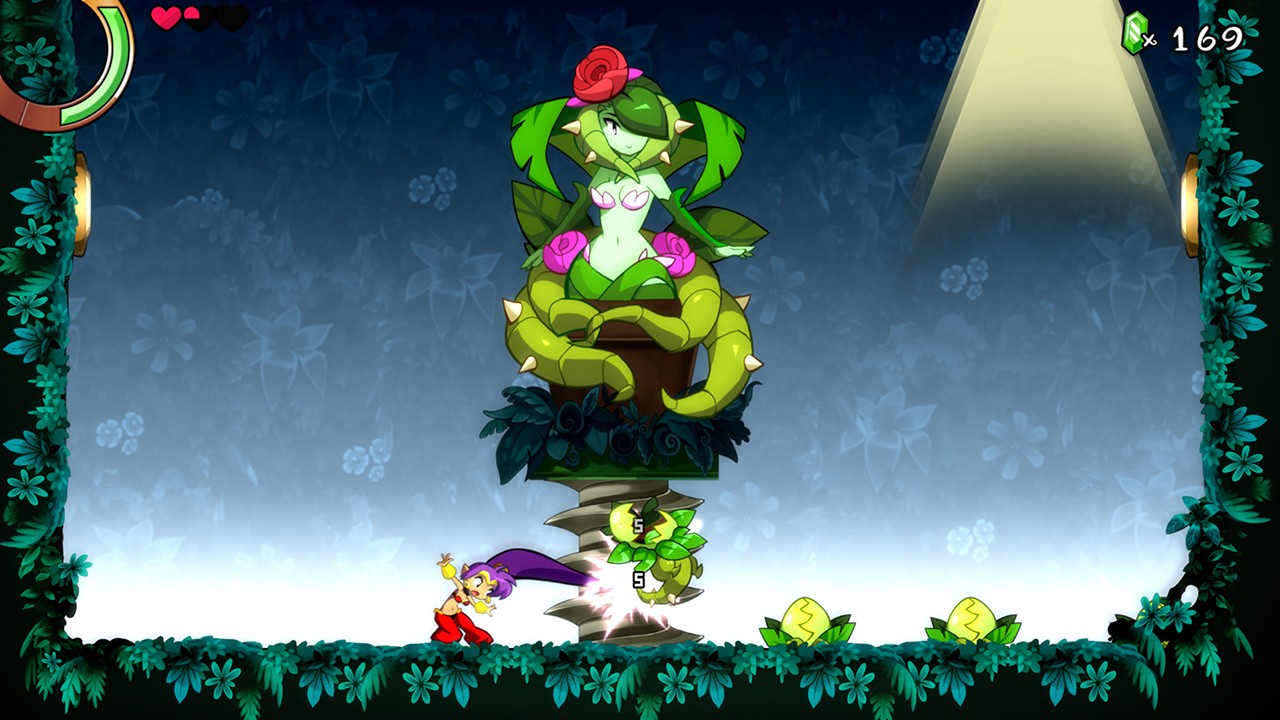 In this instance, Shantae now experiences Fusion Magic which takes the form of Fusion Forms (turning into useful and cute animals) and Fusion Dances (doing the hipshaking for magical effect). Being able to tunnel as a crab, climb walls as a newt, bring statues to life or refresh exhausted engineers are all in the wheelhouse for Shantae. The different dances and forms all have their own unique moments in any given lair of a Siren, not to mention being essential for some of the final dungeon areas and, most importantly, being useful for backtracking and getting more of the adorable heart squids.  Since you need four at a time in order to get a new heart container, there’s no shortage of them strewn about the island, and you’ll definitely be headed back to revisit some of the first places once you can bust through stone walls or swim into unknown areas. And once Zapple shares her Spark Dance, all those damn windmills you see from the very beginning finally become useful.

Though I generally think this goes without saying, Shantae and the Seven Sirens is also the best looking game in the series to date. Over the last few iterations in this new era of consoles, we’ve watched Wayforward carefully craft and design the characters and enemies to create a fantastic balance of cute, cartoony and just a touch sexy. They even make a joke about it when talking to Vera’s father and they offhandedly mention content ratings, but it’s true. Shantae has a solid fanbase of players who enjoy looking at her as much as playing as her, but it would be pointless if the game was only eye candy. So, when you see the full cavalcade of enemies that attack from the land, sea, sky and even invisible planes, you can appreciate all the colorful detail that goes into their standard poses, their attacks and their death moments. The bosses have this full blown presence, showing off how you can take the most recent Fusion Form that you’ve learned and carefully time it so that it equates how to beat the boss and move forward. The cutscene animations are in a league all their own, and it really reminds me that there could be a fantastic opportunity for Wayforward if they got a short series or even an OVA of Shantae out into the world to be purchased and viewed. It’s high praise: I generally think cutscenes are overlong and distracting, but they add this wonderful element of substance and importance when they occur here on Paradise Island.

What kept Seven Sirens really going for me is the careful balance of enjoyment and difficulty. Without a difficulty slider to set things off, I was possibly concerned that the game might lean one way or another. Instead, you have this fully formed idea that changes flavor depending on how you’re looking to play. If you just want to explore and enjoy at a leisurely rate, then Shantae’s latest expedition can be pretty straightforward and fun. The food drops from enemies are very plentiful, the number of Heart Squids and hidden maps to find is pretty strong, and the entire B side of collecting these Monster Cards kept me super entertained. If it’s relevant to you, monsters will, on occasion, drop cards as well as gems and food, and the cards can be equipped (if you have enough of them) to add passive skills, like increasing heart drops, upping your crawl speed or even adding more gems to the loot that you find. I made it my quest to get full sets of every card, which didn’t take nearly as much effort as you might think. Plus getting those Ultra Rare cards added a level of strength to my adventure that made some of the minor points a breeze. 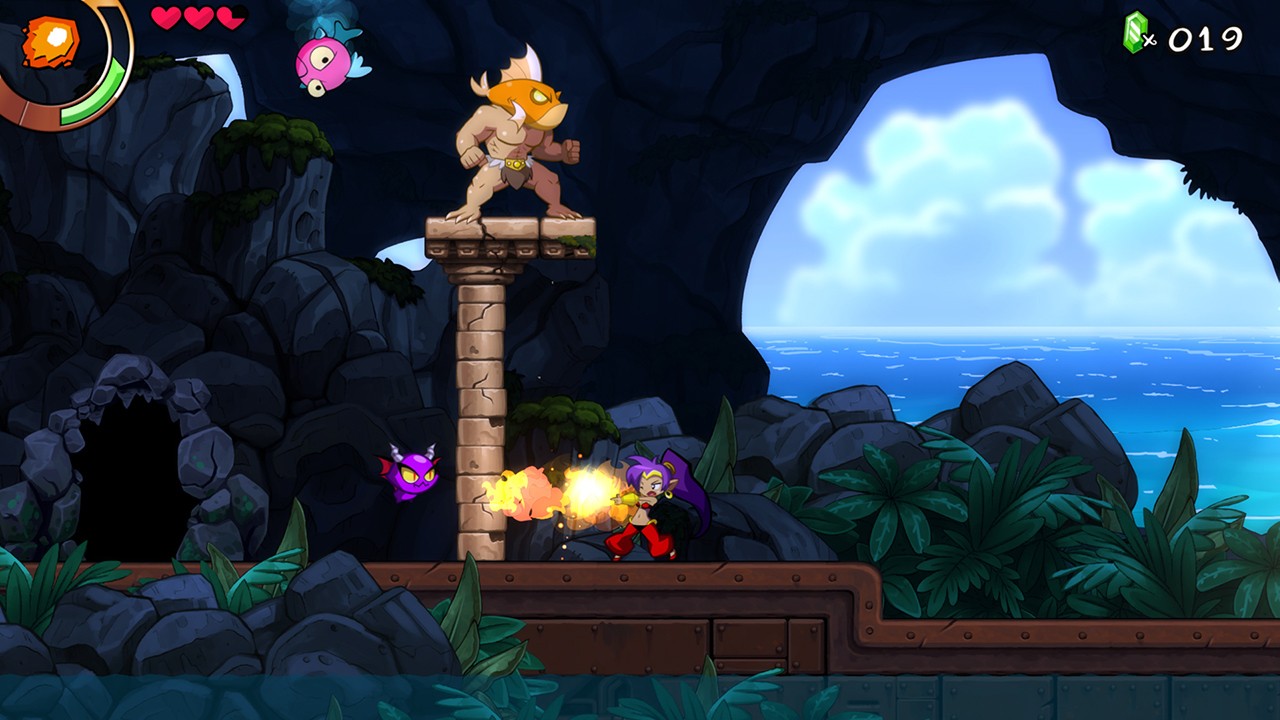 In that same vein, if you’re attempting to speed run Shantae (which many will want to do since it’s a metrovania), then the difficulty is actually pretty strong. The save points are plentiful within the dungeons, but not between. The teleportation to different areas of the island is convenient but not too convenient. The puzzle rooms do take a moment, spike instadeath is an ever present factor, and dying and losing precious time from what you did happened to me a couple of times and it was always frustrating. The game is tight as a drum, and it expects you to bring your A game as well. When you’re in the groove and you’ve got the right moves to dash, whip and dodge around the many Risky Boots encounters that you have to deal with, you feel like a true Half Genie Hero. When you flub and step into death in the form of a gaping chasm, you start to wonder if maybe someone else shouldn’t be rescuing you.

The stellar soundtrack, the hilarious writing, the well crafted level design and the ever expanding, ever increasing areas to explore…there’s nothing that I disliked about this game. Shantae and the Seven Sirens is so incredibly satisfying, gratifying and rewarding for making everything work well. I love the Squid Baron so much, and seeing him again warmed my heart. Having Bolo and Sky along for random sidequests and interjections made it worthwhile. There’s so much non sequitur in this game in terms of events happening that it almost comes across like deus ex machina, but it’s really just Looney Tunes style directing and it works perfectly with the tone and ideas of the game. This is a no brainer. It’s several hours of polished, sculpted joy, and you deserve to enjoy it.

Shantae and the Seven Sirens Review

So it’s a Shantae game, but it’s got four more half genies, and the entire game is well crafted and hilarious, and holy crap did I have a wonderful time.