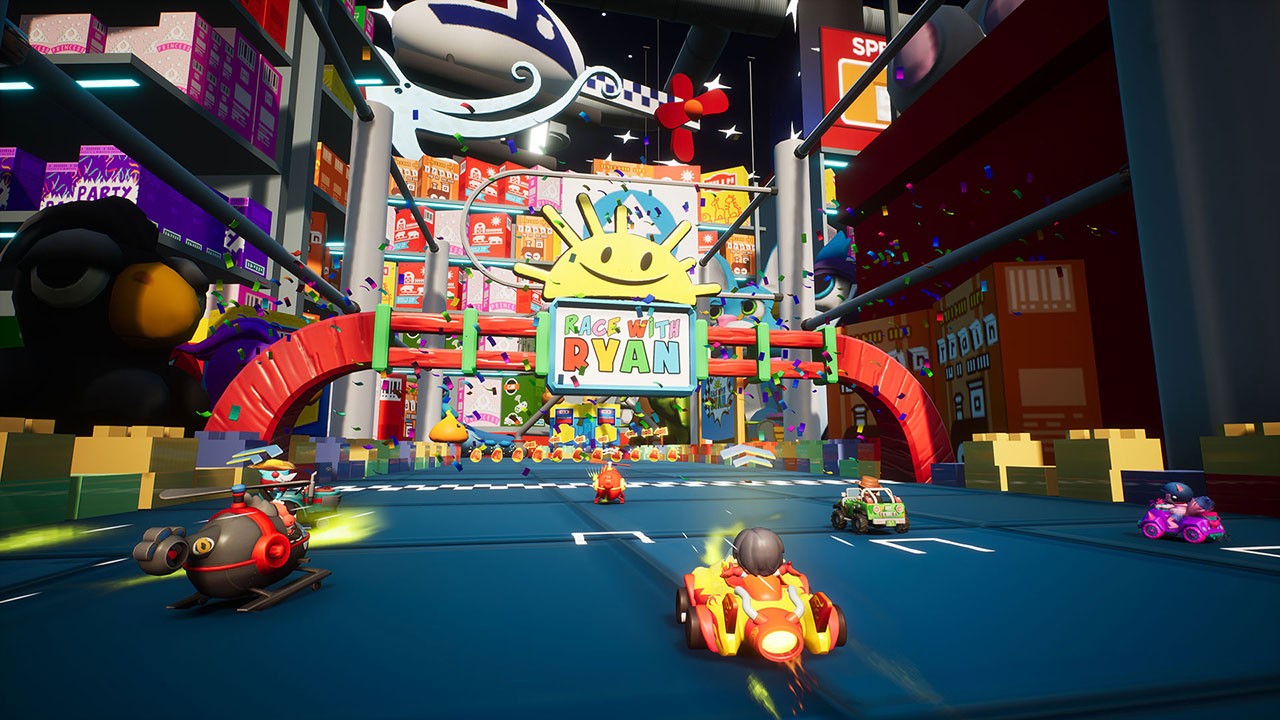 The internet and, more specifically, social media can come with all sorts of wild and wacky content. From animal videos, make-up tips and general living, the world wide web is a sure-fire place to find anything that may be of the slightest interest to you. In fact, there’s so much content and so many social media performers, that’s it’s difficult to keep up to date with all them. This was most definitely the case for me when I came across 3DClouds’ and Outright Games’ Race with Ryan for the Nintendo Switch. I had no idea who ‘Ryan’ was; that was until my youngest child began jumping around the room and screaming “That’s Ryan from Ryan’s World”. Unbeknown to me, Ryan is a bit of an internet sensation with his daily vlogs of news and reviews that has an audience of over twenty million subscribers, over a billion views and has spawned a series of toys; most notably, the Egg Surprise range. Well, now his series has inspired a kart-racing game too.

As you can imagine, the eight-year old from Los Angeles is the star of the show here, with a series of short films that set the scene for the rest of the game. It’s a nice little inclusion that will cater for younger audiences and fans of his daily shows and produces a nice little build up to the core game. As a kart racer, you then select a kart and character that you would like to race with. There’s a nice selection of vehicles here, from your normal kart-style cars to helicopters and trains. In fact, they’re all as wacky as what Ryan’s shows are (Yes, my son made me watch a couple). The characters who you can race with will also provide an air of familiarity with gamers who are tuned into Ryan and his family, with a cast that includes Policeman Ryan and his patrol car, Red Titan, Gus the Gummy Gator, Moe, Alpha Lexa, Peck and Pirate Combo Panda, plus a whole host of other familiar faces.

Each of the races take place over six very distinct and different locations, from a miniature toy world and shop, a fantasy park, the wild west and a spooky land. Each location is vibrantly coloured and highly detailed, with a series of tracks that boasts branching raceways, secret paths and slippery slides. Each of them hold a nice level of design and create some exciting racing that gives the game enough credentials to allow it to stand on its own; even within the home of Mario Kart. Even the surprise eggs get a look in, with a variety of them littering each of the tracks which, when driven into, present a series of power-ups that include Burger Shields, Sticky Slime and Decoy Eggs that can be laid on the track. As well as these, there are also a number of boost pads that give a temporary injection of speed. 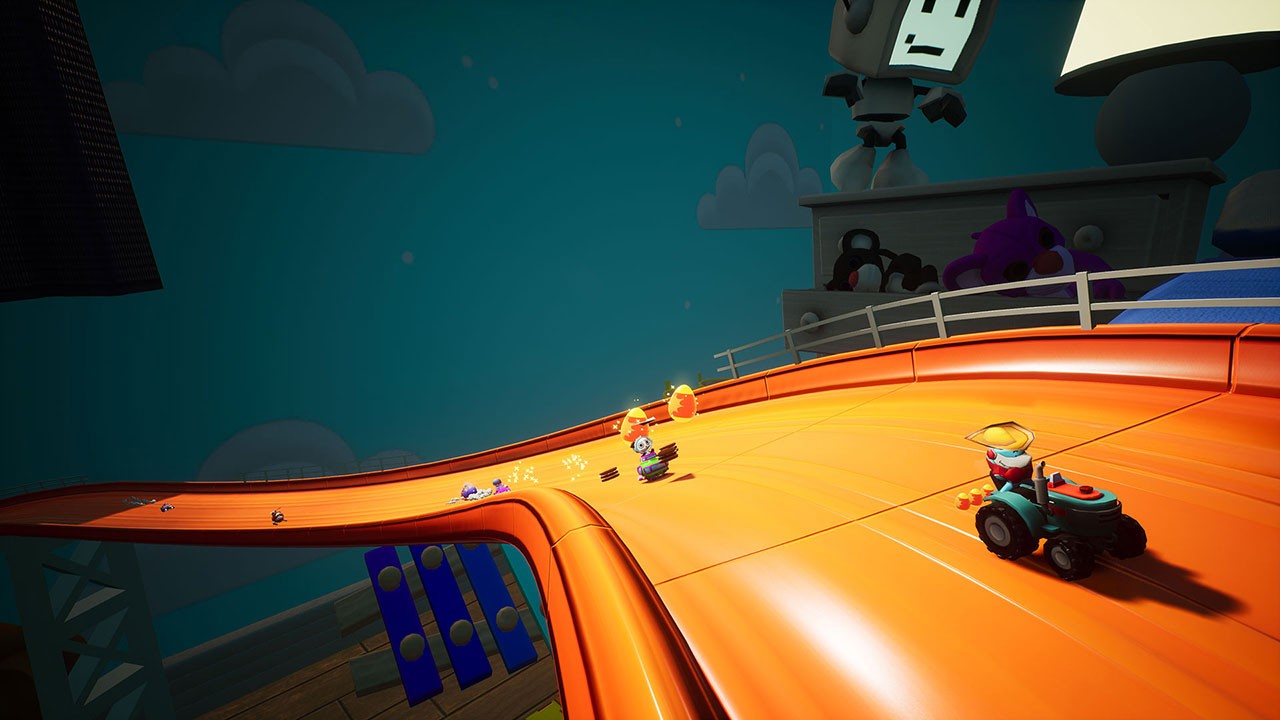 In terms of kart racers, Race with Ryan contains all of the ingredients often associated with its genre and doesn’t really bring anything new. However, it’s also a game that doesn’t really need to, as it follows the same successful formula of Mario Kart; even matching it in some of its racing mechanics and pure adulterated fun on the race track. Each of the vehicles handle nicely and the tracks themselves are simply a joy to race around. The AI challenge is also nicely balanced to give a good race and is rarely unfair. The power-ups too, are nicely balanced and entertaining and never feel useless or redundant and are, more often than not, the difference between first and last place.

What makes this game even more appealing though and is something that makes it different, is its ability to appeal to wide range of ages or player. Primarily aimed at a younger audience between the age ranges of three and eight years old, the game holds a series of options to make it extremely playable for all abilities. For younger players, Race with Ryan is an ideal starter for those new to racing games, with its ability to alter the options in tailor-making the kart and his racer auto-accelerate or auto-steer; giving the illusion that younger players are driving their karts just like their older siblings, parents and even the AI. However, as a middle-aged gamer, I can’t help but admit that I also had a great deal of fun with game, either alone or with my kids. 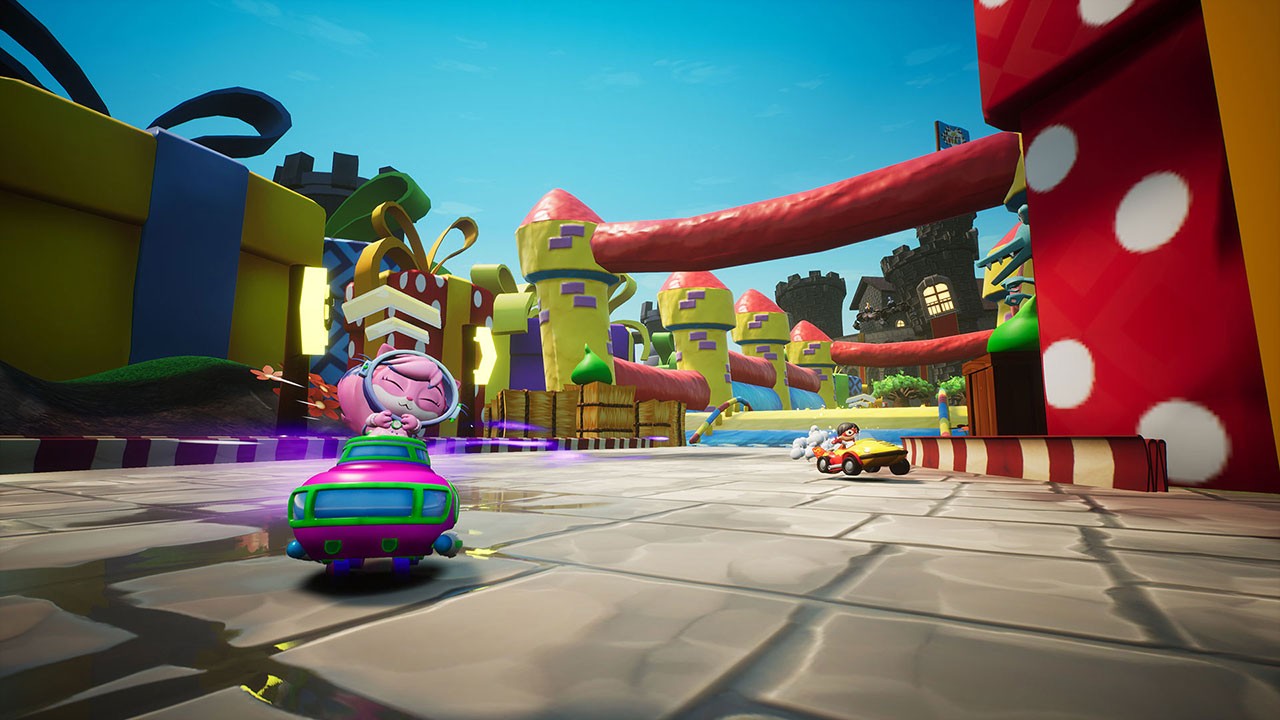 For kids who are fans of Ryan, they’ll also love the little extras that are thrown in for good measure, such as Ryan’s toy friends adding their own thoughts and feelings on the race, plus Ryan himself popping up on the screen at certain intervals to tell you that your doing great or that you pulled off some great manoeuvre or move. It really does add a layer of personality to the game and kids will love that they are constantly being rewarded or congratulated in a way that will boost their confidence. In fact, as kart racers go, this is probably the most family-friendly game within its genre that I have come across; even surpassing the mighty Mario in this respect.

There’s no online play here, but with its targeted audience in mind, this is an understandable decision. However, you can play locally for up to four players with a split-screen functionality. This is great game for parents to play with their kids, along with the child-friendly presentations, familiar characters if they’re fans of the show and the personalisation of custom options to ensure that younger players are never frustrated with not being able to play the game properly. It looks fantastic, sounds great and performs smoothly with no technical issues or slow-downs; even in the game’s split-screen four-player options.

Overall, Race with Ryan is a very competent and playable kart racer. It may not quite match up with the presentation values of Nintendo’s flagship racer, but it certainly has enough to more than warrant a purchase and to make it stand out on its own. It’s fun, it’s friendly and instantly accessible for gamers of all ages and for that alone, is certainly worthy of recognition. It may be a bit thin on courses, locations and game modes, but what it does have is thoroughly entertaining in terms of its racing mechanics, track layouts, bright graphics and overall, child-friendly presentations. If you’re a fan of the show, or have kids who are familiar with Ryan, or if you are looking for a family-friendly game that everyone will enjoy, then Race with Ryan has all the ingredients to ensure that all involved will have a blast, plus a few egg surprises.

Race with Ryan is one of the most child and family-friendly kart racers ever devised and even holds enough to maybe nudge Mario into the pit lane.