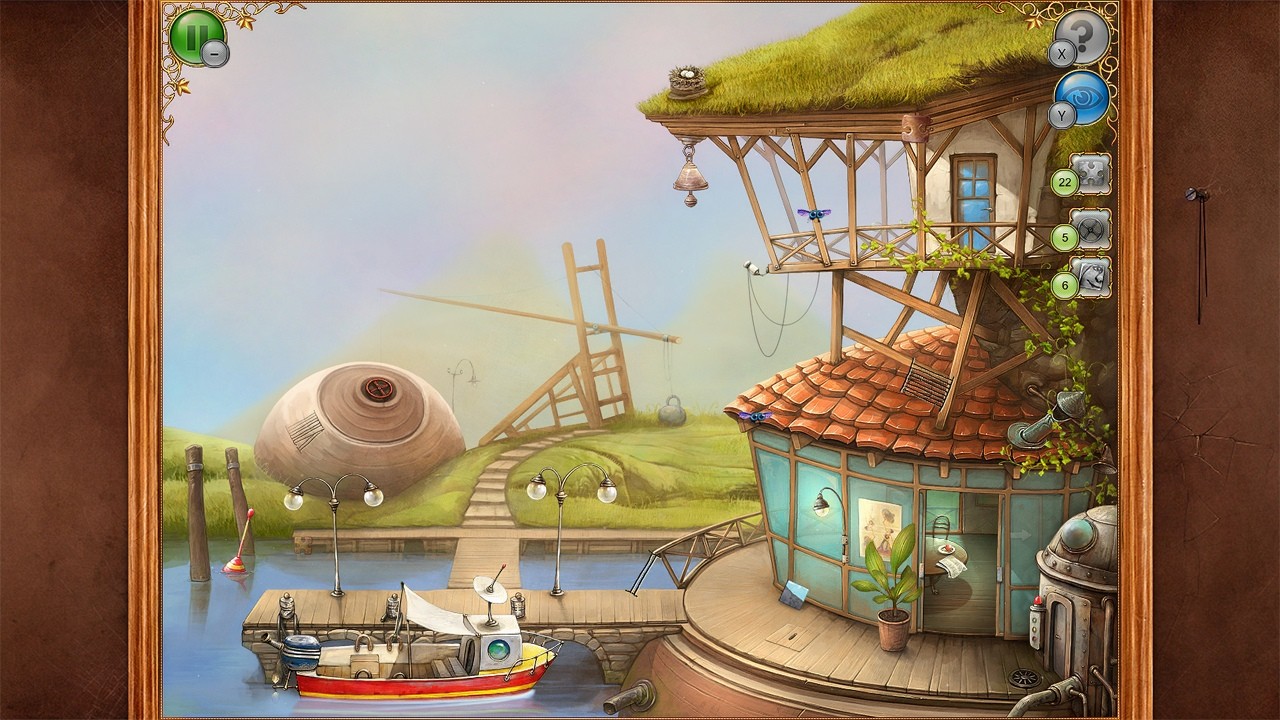 When I play a puzzle game, I expect a mixture of relaxing and frustrating. Normally, I prefer the relaxation factor to outweigh the frustration factor. The Tiny Bang Story does not seem to have this balance.

The Tiny Bang Story does not have much of an introduction. There is a short animation of the tiny planet being destroyed by what looks like a colliding football and comet. The explosion causes puzzle pieces of the picture of this planet to detach from the picture and fall off of the screen. When the player presses the play button after this animation, they are thrown into the first chapter of the story. I think now is a good time to mention that this game is entirely devoid of any text (beyond the title) and there are no text-based instructions. While this is advertised as making the game suitable for all ages, even ‘children’, I feel like making any child play this game would result in the destruction of any device by the said child in anger or confusion. While the first chapter begins with arrow based visual instructions, with a hand-like cursor showing the player how to use the touch screen or the left Joy-con stick to click on certain puzzle pieces or objects in the levels to collect them. These instructions quickly disappear and with no real other instructions, the player is left to figure out the game on their own.

You begin The Tiny Bang Story in the first of five areas that span several ‘pages’ of areas that you can eventually alternate between after completing parts of the level’s puzzles. The aim of the game is to explore the pages of the game, collecting puzzle pieces, and also objects to help you fix smaller puzzles in each stage. Once you have collected the numbered amount required, you have to drag the small item on the sidebar of the game onto the part of the map it is used for. This normally results in a separate puzzle. 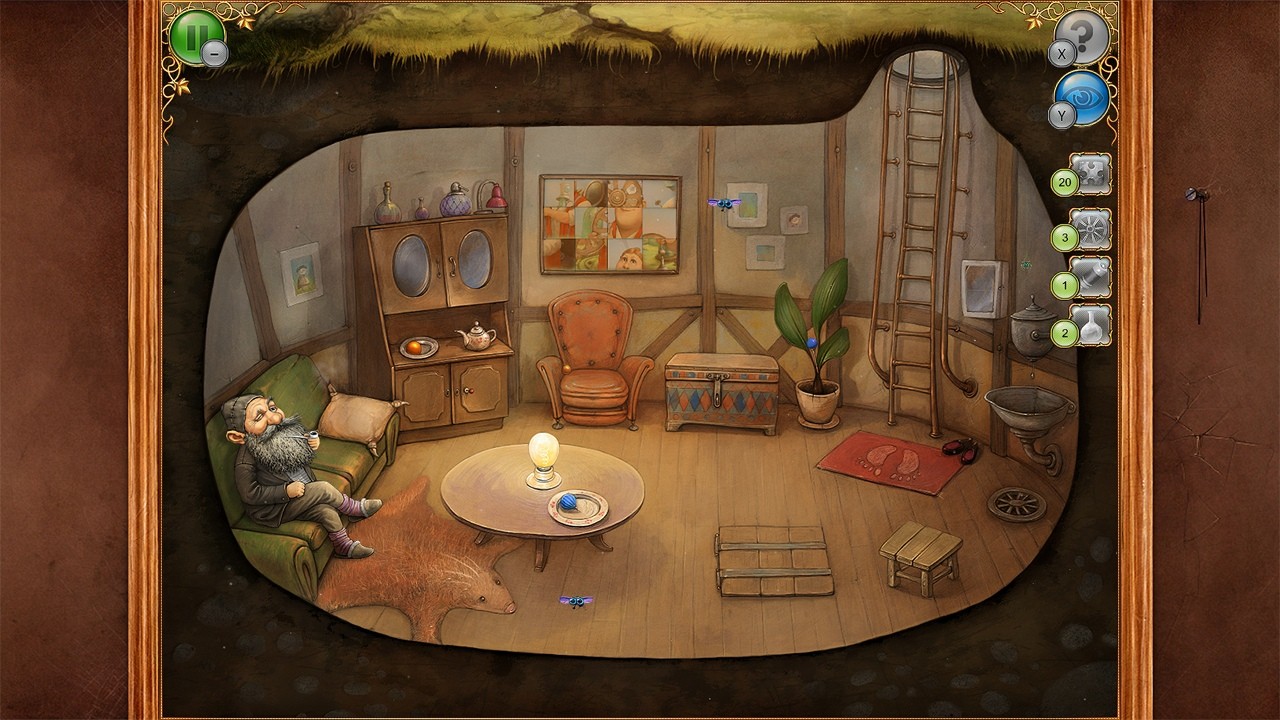 These separate puzzles, clever and easily recognisable, are what stops this game from being scored any lower than it already has been. They initially appear unique but across the twenty puzzles across the five chapters, they follow basic patterns and range from fairly easy to take a few minutes of thought. The real sin of The Tiny Bang Story is the lack of these puzzles and how they are spread out over the game. For every minute I spent on these sliding puzzles, navigation puzzles or literal puzzle-style puzzles, I spent twenty tapping random parts of the screen hoping I would find something to move the game along. This pace is painfully slow. The point and click feature of the puzzle aren’t particularly difficult but many of the collectibles were so well hidden that I was tempted to reach for a guide on several occasions – resulting in the aforementioned aimless screen tapping.

After each stage, you are given several puzzle pieces that you have collected and can fill in the puzzle of the planet which was shown in the animated introduction. This was easily the most satisfying part of The Tiny Bang Story as when it was done after all five chapters, you had access to a post-game menu where you could play the mini-game puzzles which actually were worth playing. Unfortunately, after completing them all during the game, I saw no need to replay them. I already knew all of the solutions.

You are given two small lifelines. One is a hint-coin system reminiscent of the Professor Layton puzzles, where you can collect these infinitely generating blue insects on the screen to earn enough for a red insect to guide the player to a randomised item or puzzle piece they have not collected yet. This seemed to work only half the time and sometimes would just buzz at me. The other lifeline is able to be used at any time and will light up interactable areas of the screen. However, this didn’t really make puzzles any easier as these areas were obvious in placement or in design anyway. Any story elements related to the five characters are vaguely implied at best and non-existent at worst. The plot is that you collect puzzle pieces, and complete small minigame puzzles and put together the final puzzle of a picture of their planet. In the end, all of the characters are together. There isn’t much of a plot to talk about. 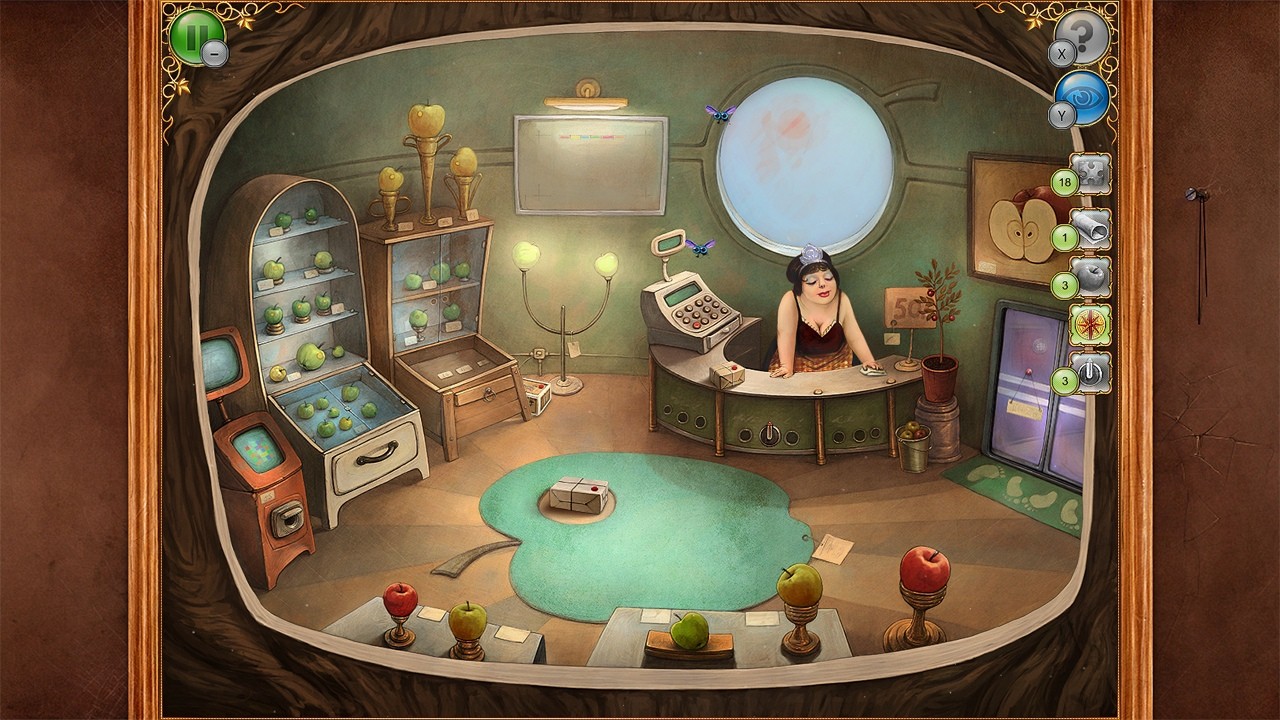 The five chapters are all designed differently in terms of a pleasant and charming art style. This game while all in 2D and simplistic is rather beautiful looking and I’ve never seen a game-world look quite like this. The solution was never the same for any part of the game and there were only vague patterns that could be followed in acquiring collectibles across chapters. For a game with a better pace, this would be positive. After three chapters, I had to take a break for the sake of my blood pressure. The instrumental music is cheerful although, with only ten tracks that loop on each level throughout the game and the long play-time of each chapter, I’d recommend keeping the sound low or playing with no sound at all.

One thing that really stuck out about The Tiny Bang Story was how it really didn’t seem to belong on the Nintendo Switch. The touch screen focus of this game originally made for PC and mobile devices make this game clunky and clumsy to play on the switch. Unlike its handheld predecessors in the Nintendo DS lines, the Switch doesn’t seem to have very good touch-screen accuracy. Using the Joy-con and A button for the controls helps with the accuracy but makes selecting things a chore as the white dot cursor of the game moves very slowly. The user interface and menu in-game aren’t always responsive and often requires being tapped or selected multiple times. Dragging items onto areas of the map also often requires several attempts. These core mechanics are essential to gameplay, so not being able to use them was frustrating.

The art style reminded me of Broken Age and it had similar quirky vibes in its stylistic themes. For indie 2D graphics, it was pleasant to look at. It played similarly to the old Real Crimes series of Nintendo games, such as the Jack the Ripper edition where a player would have some stages where they would have to find well-hidden items within a cluttered and faded background. The mini-game puzzles, which I only wish the game had more of, had some elements similar to Professor Layton’s puzzles. That is where the comparisons end, however, as this game didn’t take enough risks and can’t be classified among these other games. The point and click element of this game dominated so much, at times I forgot this was a puzzle game and not a budget spot-the-difference. I expected more from this game. I was relieved to finish the final puzzle and pick up something better.

With its few puzzles spread out over endless stretches of item-finding; the game leaves a sour taste in the mouth for anyone expecting hours of puzzle-based play.