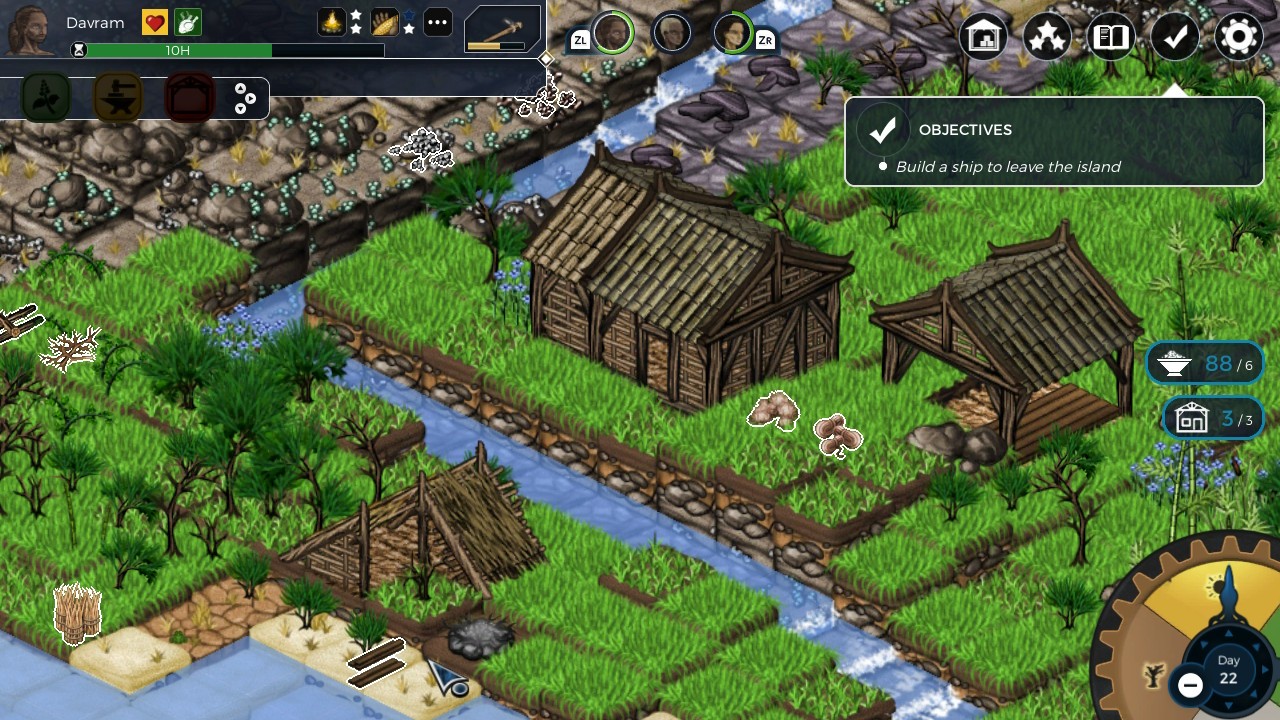 Seeds of Resilience is a survival game where resource management— including time, food, materials, and allocation of manpower—is key. There’s no story here beyond the fact that random people keep drifting to random islands on flimsy rafts (which feels like it could use some explanation, in my opinion) and must band together to survive. Harvest the bounty of the island in order to feed your survivors, and build necessary tools and shelter. But don’t get too comfortable once you have a plan or a routine down because anything can happen.

There are two game modes: mission and survival. Missions function as a glorified tutorial in which you learn the ropes of survival while also unlocking new characters to enlist to your team of three. There aren’t too many missions (15 in all), but they create a good basis for the greater challenge of survival mode. That being said, those expecting some sort of campaign will find some enjoyment in missions, but ultimately Seeds of Resilience has a sandbox format.

Survival mode is the bulk of the game and gives you a single task with an unlimited time frame in which you accomplish it: build a boat to escape the island. You can tailor the experience from a handful of selections including frequency of weather-based mishaps and size of your island. Then, you’re set loose with the team of three chosen survivors.

Survivors have different personality traits in addition to skill strengths, making team composition important. Some survivors, for example, are asocial, meaning they don’t get as much sleep housed with other survivors, while others actually sleep better with a housemate. More hours slept means more hours available to work, so you’ll want to plan your housing accordingly by bringing a third person who doesn’t mind the presence of another so that you can have a single person house and a two-person house to accommodate the personality traits of the other two survivors. You actually don’t ever see your survivors except for that first moment when your raft washes up, which is likely a budgeting thing, but it would have been nice to see my chosen individuals carry out the tasks assigned to them. Similarly, materials harvested don’t just disappear into some invisible inventory, but rather remain on the ground unless you build a warehouse. 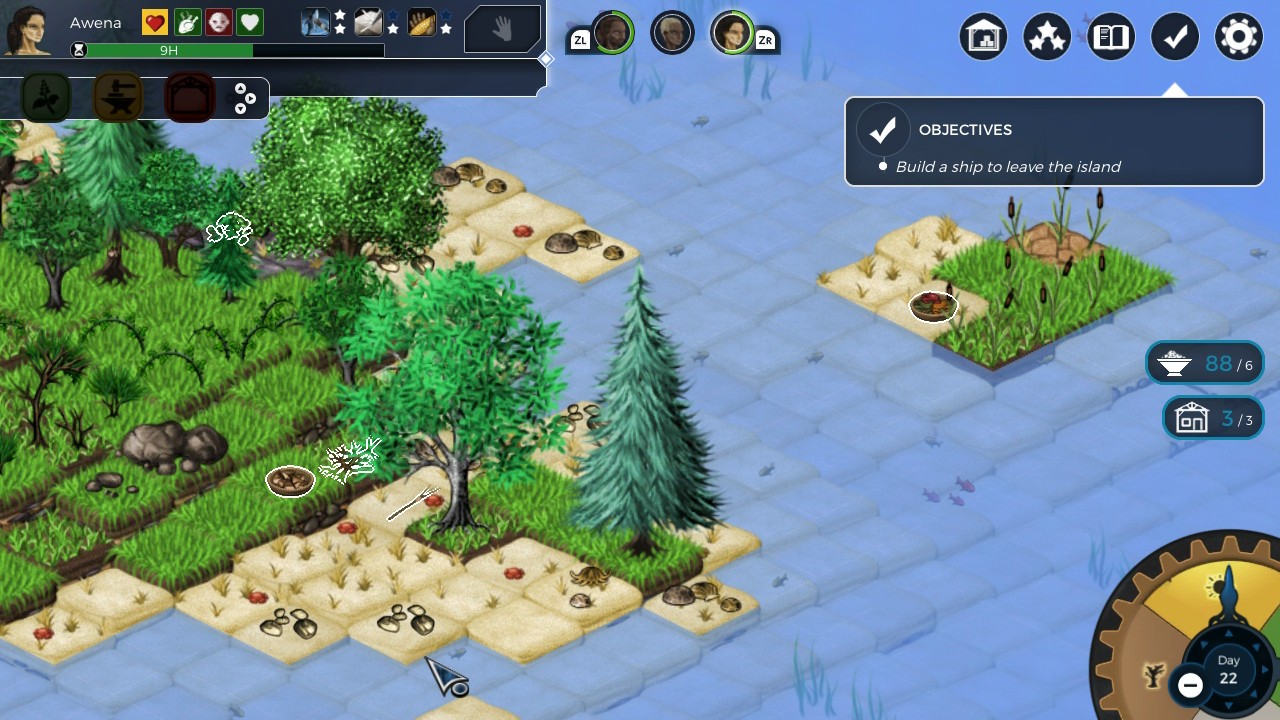 All tasks require a set amount of time to complete. Rather than stamina bars, your survivors have a bar indicating the total number of hours they are able to work. Once you’re tapped out of hours, your only option is to end your turn. I liked this aspect because it added a layer of strategy by giving me time to think about how to address issues that arose. I also liked the minimalistic UI, which told me at a glance how much food and shelter I had versus what I required for my survivors.

Every survivor can learn and improve skills through practice, but some are more inclined to learn more quickly. As there are only two levels per skill, these bonuses are only effective during the early stages of survival. Skills include fishing, crafting, wood and stoneworking, and farming (which includes cooking). Wood and stoneworking are useful in building structures used to refine materials as well as to harvest the associated raw materials. Fishing is useful for, well, fishing. At first, you’ll only have access to a fishing spear and must click on individual fish in the water. Doing so is limited because of the realistic way resources don’t replenish immediately and so you’ll need to give fishing a rest every few days in favour of other sources. Farming is the only other steady source of food beyond harvesting wild blackberries and requires you to plant seeds and wait. Seeds can be found in random crates washed up on the beaches and will mature and put out crops, which can then be eaten or turned into more seeds. Unfortunately, farming is only viable during the warmer months, meaning you’ll need to stockpile food before winter hits.

Seasons last for a number of turns and the colder months mean you’ll need to change your buildings to more insulated ones lest your survivors freeze. One issue is present no matter the season: wind. The moment a strong gust of wind knocks over your shelter—and it will—your whole operation grinds to a halt as you dedicate precious time to rebuild. This happens particularly early on with the more flimsy structures and was aggravating more than anything. To add even more to your plate, new survivors arrive at random, throwing a wrench in any carefully laid ration plans. Sometimes, I was better off just letting some of my survivors die as they were a drain on already limited resources. Arguably, that’s a strategic move, but it also sets you back by however many food units they consume over the course of the days it takes them to die and jeopardizes the rest of your team.

The majority of Seeds of Resilience is controlled with the left stick in the way one would use a mouse, but the crafting and character menus are accessed using the D-Pad. Pressing down on the D-Pad opens the first set of menus, which are for planting seeds and manipulating the terrain. Pressing to the right on the D-Pad twice gets you to the crafting menu, after which you must press down to get into the sub-menus and then right again until you get to the branch of the sub-menu. There’s still another set, but you get the ideas. This process took some getting used to and miss clicking still takes up a lot of time though I’ve played for a few hours. A radial menu might have circumvented this issue and allowed the developer to stay to the theme of simplicity. 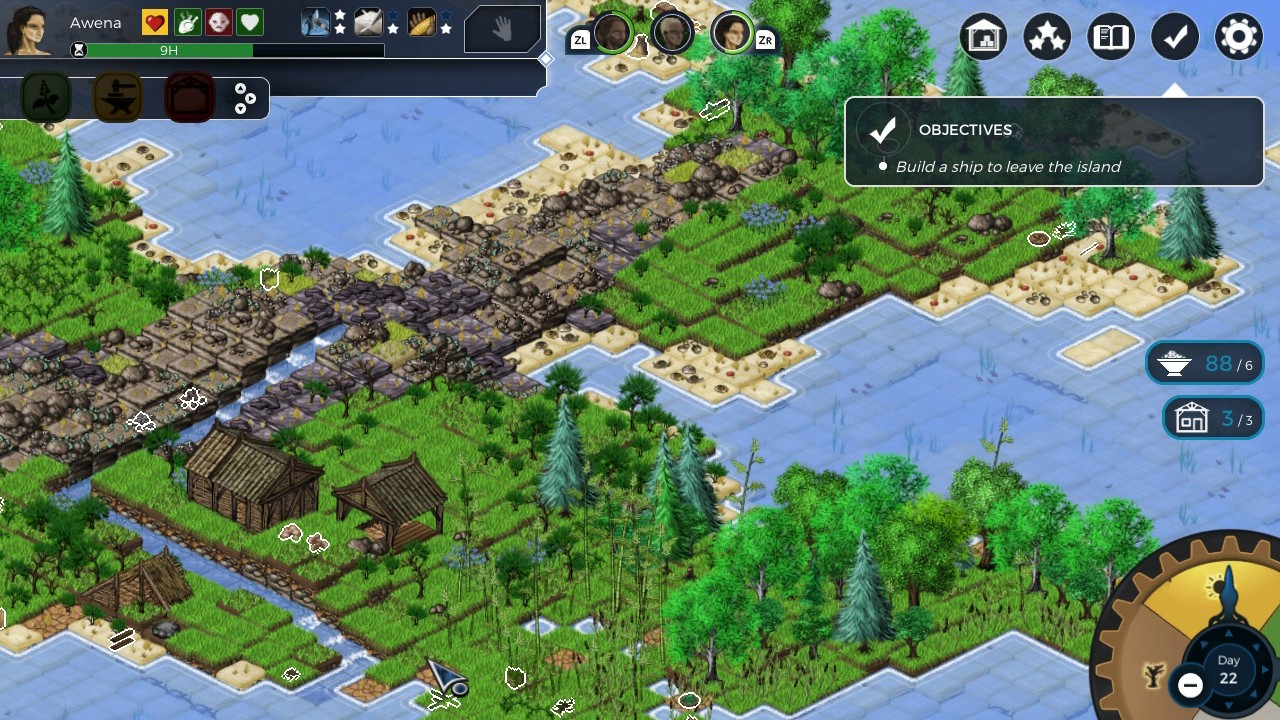 On that note, it would behoove you to learn what ingredient is what because recognizing them on the fly will save you a lot of time when trying to craft. The small box that shows what ingredients you need doesn’t have text, but rather even smaller images. The text will flash if you try to craft without having the required number of materials, but it will only do so for the topmost item in the list. This means that if you don’t recognize the image in the last spot, you’ll have to collect the materials preceding it before Seeds of Resilience will share that information.

I would have liked to see different regions and the resulting challenges posed by their unique flora and fauna rather than the same island, fish, trees, and rocks. There’s a decent selection, but after you’ve beaten the missions and completed a round of survival, replayability becomes fairly limited due to the scope of resource types. The tranquil, somewhat eerie background track plays on repeat. Otherwise, all you hear is the sounds of the wind and surf, punctuated by the chopping of wood or whatever else you’re currently doing.

For the price, I can’t argue with the amount of content Seeds of Resilience offers. Could it use a coat of polish on its UI, controls, and resource diversity? Certainly. Still, this is a solid and challenging, albeit simple, survival game that can be as unforgiving as you want it to be.

For the price, I can’t argue with the amount of content Seeds of Resilience offers. Could it use a coat of polish on its UI, controls, and resource diversity? Certainly.