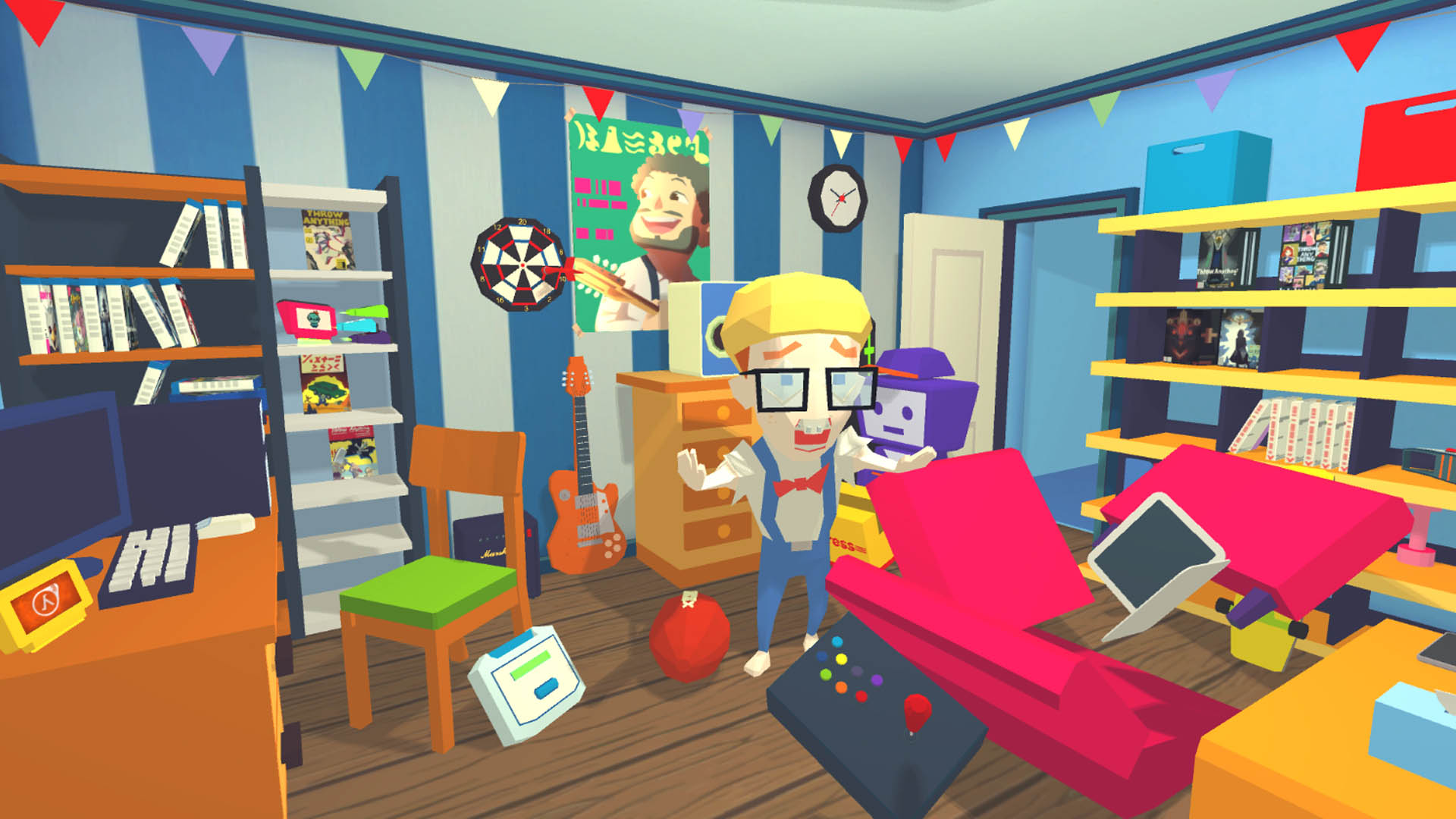 When faced with a zombie apocalypse, there’s bound to be a few people who think that they’ll be one of the few remaining survivors, armed with a crossbow and living off the land in a calm and controlled manner, as if it were as easy switching the kettle on. In reality, if a legion of the undead were at your door or worse, climbing up the side of your building to eat your brains, chances are you’re just going to grab what you can and Throw Anything to survive. And here we have the introduction to this PSVR title: Throw Anything.

So, it’s the end of the world, and you’re one of the survivors and protectors of a few NPCs in a series of locations under attack from zombies. Practically every room is located a reasonable distance off the floor where you’ll have a set of attackers climb up the side of the building to turn both you and the NPC into the undead. These guys are old school, so they move pretty slowly like Plants Vs Zombies, but that doesn’t take away the threat. To stop them in their tracks, you literally grab anything within the room and throw it at them. Most times you hit them, they’ll fall off the building, but there are also lower, lighter items that need to be thrown a couple of times for effect. 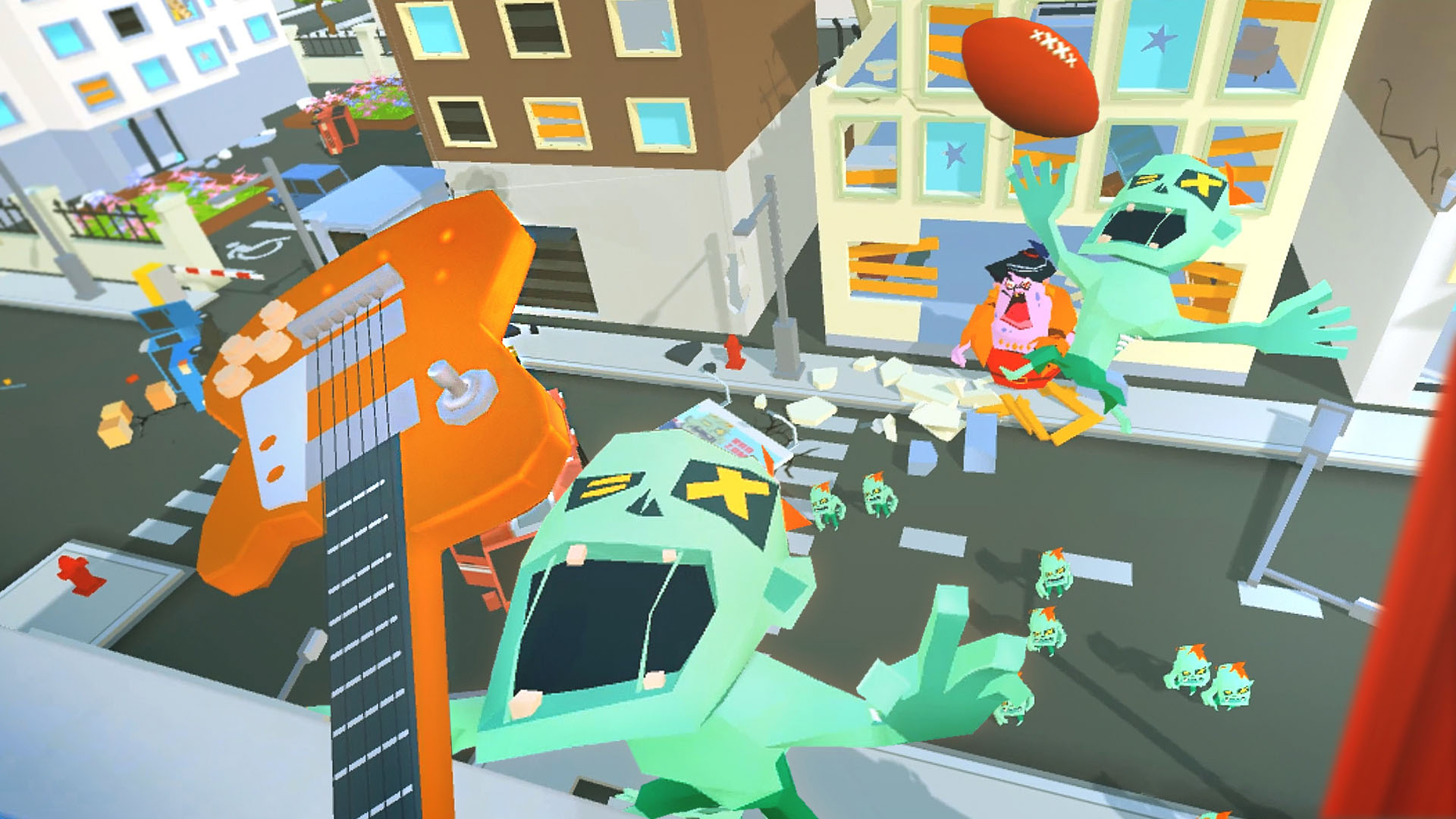 Anything in the room that isn’t bolted down can be thrown: if you can see it, chances are it can be thrown – including the NPCs and delivery robots. Some items are a little heavy, but throw another item to break it up; i.e. a swivel chair, then you’ve got sections of a table or stove that can be chucked too, and highly likely to knock off a handful of zombies in one go. The objects vary from coins and vegetables to golf clubs to machine guns. With the latter, and other items such as fire extinguishers and blowtorches, you can operate in one hand and fire projectiles at the enemies for some time, then once depleted, throw that too.

Throw Anything is played with the move controllers, and both represent your left and right hand. The playing environment can get quite hectic; however, so I found that I was only using one controller, with the other as a backup. With my dominant hand, I would pick up the throwable objects, and the left would be for melee weapons such as the clubs or cutlery. Should an enemy reach the window, you take a swipe to knock them off, usually in one hit. The only flaw to this method other than the reachable distance is you never know how long the item will last, so you end up panicking for another thing to quickly throw – often the NPC. As long as you protect them, you’ll get bonus scores for an untouched NPC, but they are so annoying and shout at you each time you throw an item, that it’s almost mandatory to throw them. Besides, they’re pretty effective at taking down rows. The only issue with this is after a few drops; they’ll eventually die and turn into a zombie. While it’s not game over, you won’t get any points for it. No big issue though as chucking them out the window is satisfying.

I wouldn’t say that you throw things so much as more drop them. If you peer over the edge, you can drop items on top of the baddies below and this method is more accurate and strangely rewarding as you watch the object fall to the ground, taking out another group. Get too close to the edge, however, and you’ll hit the deck. It’s quite a scary experience when wearing the headset for so long as the drop is quite disorientating, but weirdly enjoyable too. Speaking of disorientating, there’s not too much of a conflict when selecting objects to lob. As everything is behind you, you can either spin around to pick things up, or the best option is pressing the square button to do an instant 180º. When it gets a little busier, the constant switching back and forth can be a little too frantic, but manageable. 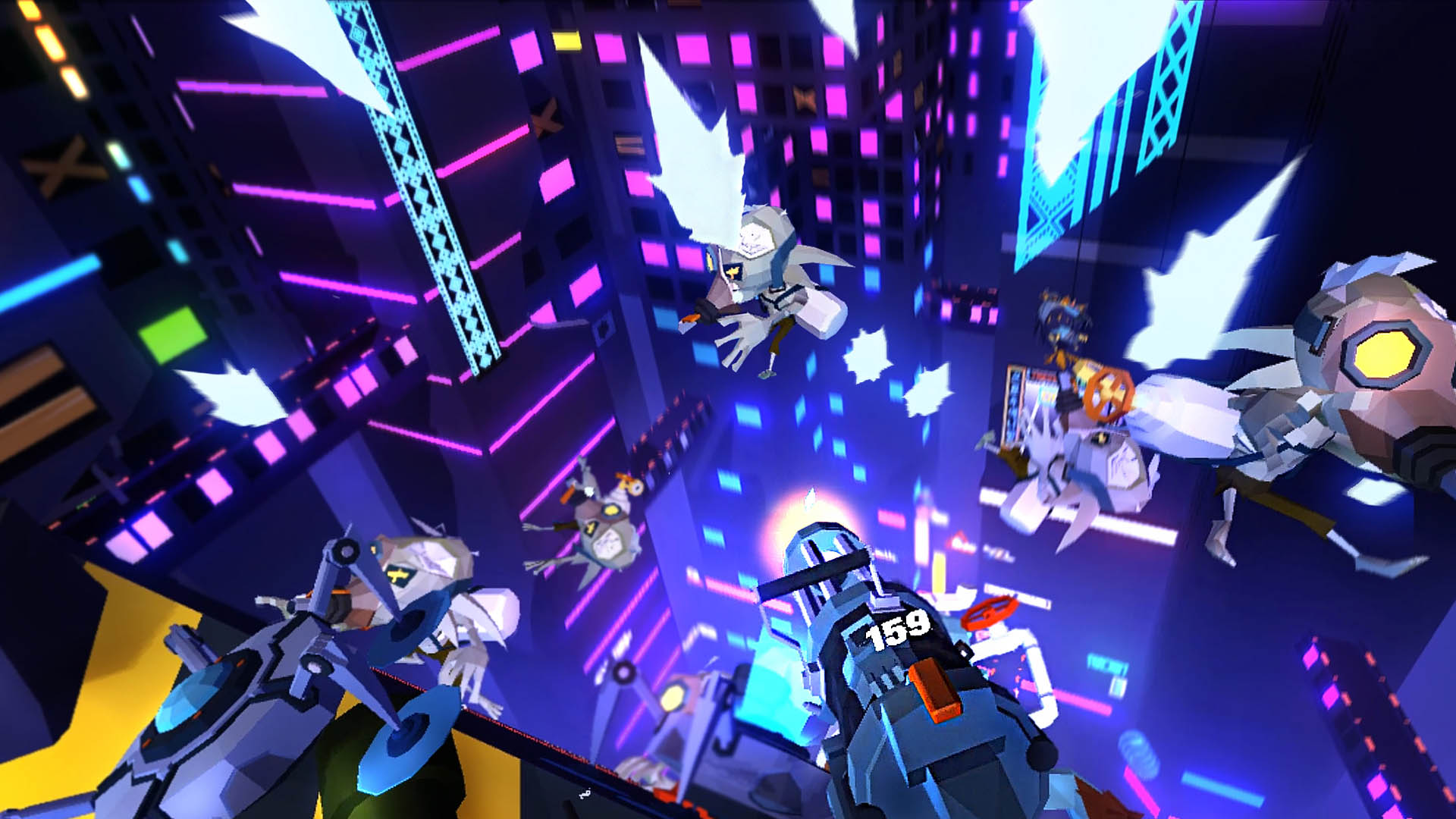 The visuals were pretty good and peering out the windows that look out to the apocalypse is wholly immersive. Character modelling is also on point, and the zombies and NPCs resemble a cute approach to these hordes from hell. I have to say that the bosses that you fight in the game are great. They take a few more hits than the standard foot soldier but aren’t overpowering. That said, the level of difficulty is pretty high, even when on the easy setting. It’s mostly a combination of the accuracy, the number of zombies and also trying to find something useful to grab that makes the game difficult. On occasion, you’re looking about for items to smash or hidden features like a photocopier that duplicates other items that can be thrown in unison. In addition to the scoring system, there is also a currency available where you can buy things that can be used from the outset of a level. The only downside to this is once you use it, that’s it – no-repeat use if you replay the level.

Throw Anything is a fun concept and works pretty well with the PSVR setup. The graphics are good; there’s a fair amount of levels to play over a variety of difficulties, though it’s quite tough. I have to add that the music is entirely out of place. When you have zombies climbing your building to eat your brains, the last thing you want to hear is the music ever-present in the local supermarket. It’s just very abstract and distracts from the game for all the wrong reasons, but switch it off, and Throw Anything is immersive enough to cause a bit of damage without filing an insurance claim.

The dead are coming, and the best thing to do is throw anything and everything at them to keep them at bay. Throwing at a distance takes practice, but the most enjoyable way to get a zombie off your wall is meticulously dropping a heavy object on the head. Nice.

Nice presentation and a variety of levels.
Innovative use of inanimate objects.
Gravity hasn’t been this much fun.

Tricky to get distance on a throw.
Dreadful music.
Other than the difficulty modes, no variations of the game.