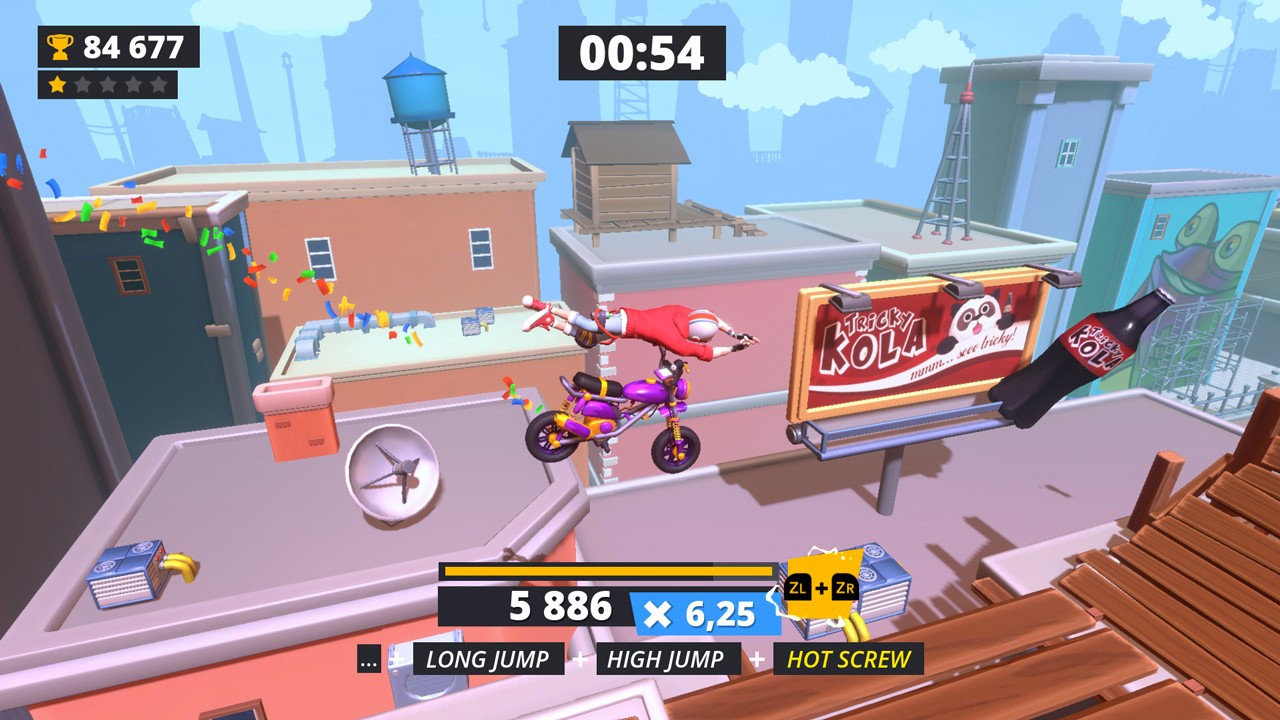 With the already overcrowded mobile market full of hill-climbing games and similar, the Nintendo Switch is getting the overspill – from successful ports to some easier best-forgotten attempts. Urban Trial Tricky is one of those games that could be dismissed as a clone of these type of games, but under the hood, it has a fair amount of its own tricks that will keep you occupied.

The game features a good selection of game modes where you have to score points, with others just requiring you to get to the end of the track as swiftly as possible. Featuring a good amount of tutorials built-in to the first stages, you soon learn of the various moves you can pull off and goodies that are up for grabs. Like most of these types games, you need to get your motorcyclist from one end to the other, usually left to right but the twist here is you can spin your bike around and head the opposite direction. This works great for the very little tricks you perform to set yourself up with enough of a runway to pull off a mega-jump.

It’s a bit overwhelming at first as your bike is pretty swift. ZR accelerates, ZL applies brakes/reverse and the left analogue stick will balance you out. The immediate use for this is when you are airborne so that you can line up your landing effectively, the second is full performing wheelies. Anyone familiar with Tony Hawk’s Pro Skater will pick up the controls quite quickly because as soon as I was on the trick stages I was doing all manner of spins, Superman-poses and racking up big scores at an early point. 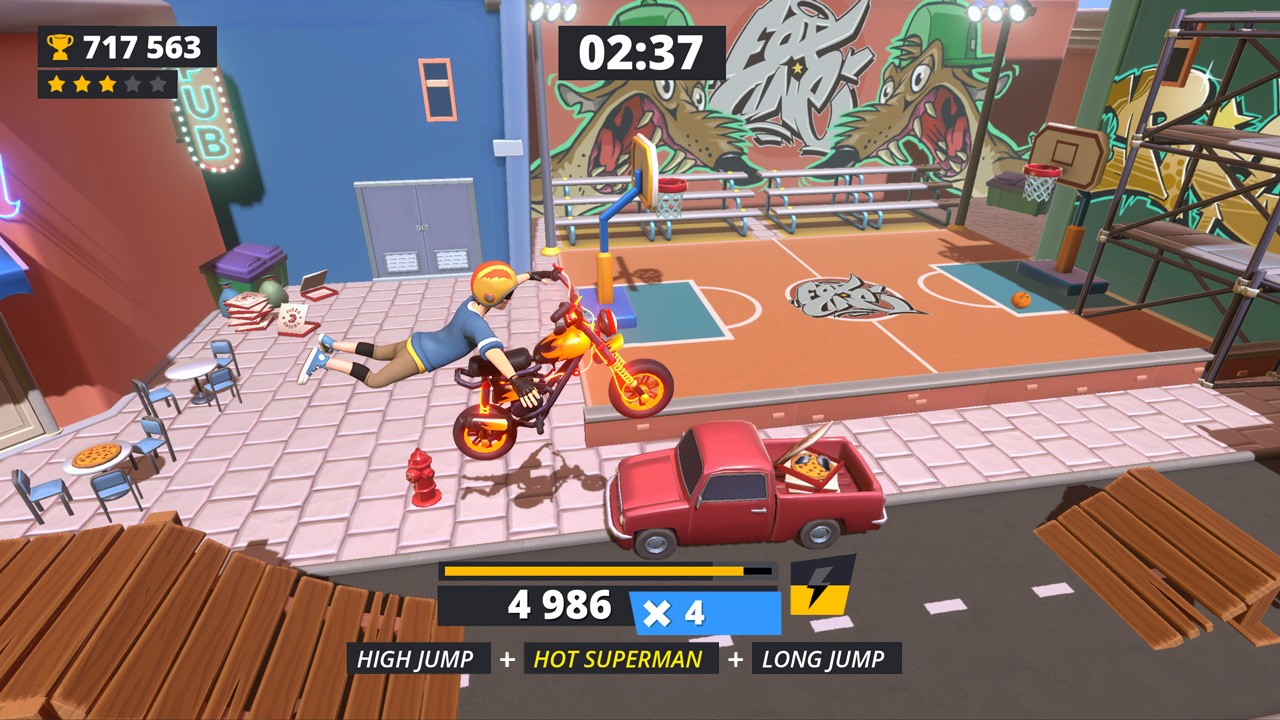 Fortunately, there are plenty of challenges to keep you going. Other than the main objectives there are also bonuses such as collecting bags of money for new gear, but one of the better options is the ‘beat the dev’ mode. Here you can attempt to beat the dev’s score or times (the latter is easier, but you need to get better tricks to increase your hi-scores). The better you play the more stars are awarded, and when you reach a certain amount you unlock new skins, motorbikes and tricks. Though these are unlocked, you still need to purchase them with your winnings or the money bags found on each stage. Within about two or three tracks I had unlocked a new skin or two and colour palette, but there’s that itch to unlock everything, and the gameplay is there to keep up the momentum.

Visually the game is surprisingly good. The camera angles aren’t from a sideline perspective but skewed slightly so you can plan your route ahead. Without a doubt, the tricks were the highlight of the game as they’re so over the top, yet pretty easy to do. Holding the Y or X button will perform your preferred pose that can be assigned before each race – more can be purchased as you unlock them. They’re a little similar to one another in-game, but a fun selection nevertheless. Unlike most trick-based games it’s not just the jumps where you can do stunts, but there are numerous poses for the wheelies you do. Again, they’re more on the over-the-top side and somewhat harder than the jumps as you can never predict what’s coming next.

Urban Trial Tricky isn’t like its peers where you have to restart a stage each time you crash as the checkpoints are very forgiving, often putting you back in action pretty quick. Of course when you’re attempting time trials, crashing will cock up your overall performance so even though respawning is quick, to beat the dev scores, you need a more or less perfect run of speed and a decent range of combos. It is very much aimed at the mobile market due to the simplicity so works great on the Switch – both handheld and when docked. Again, the graphics are a highlight, and it’s easy to navigate about each screen and know what you’re doing. 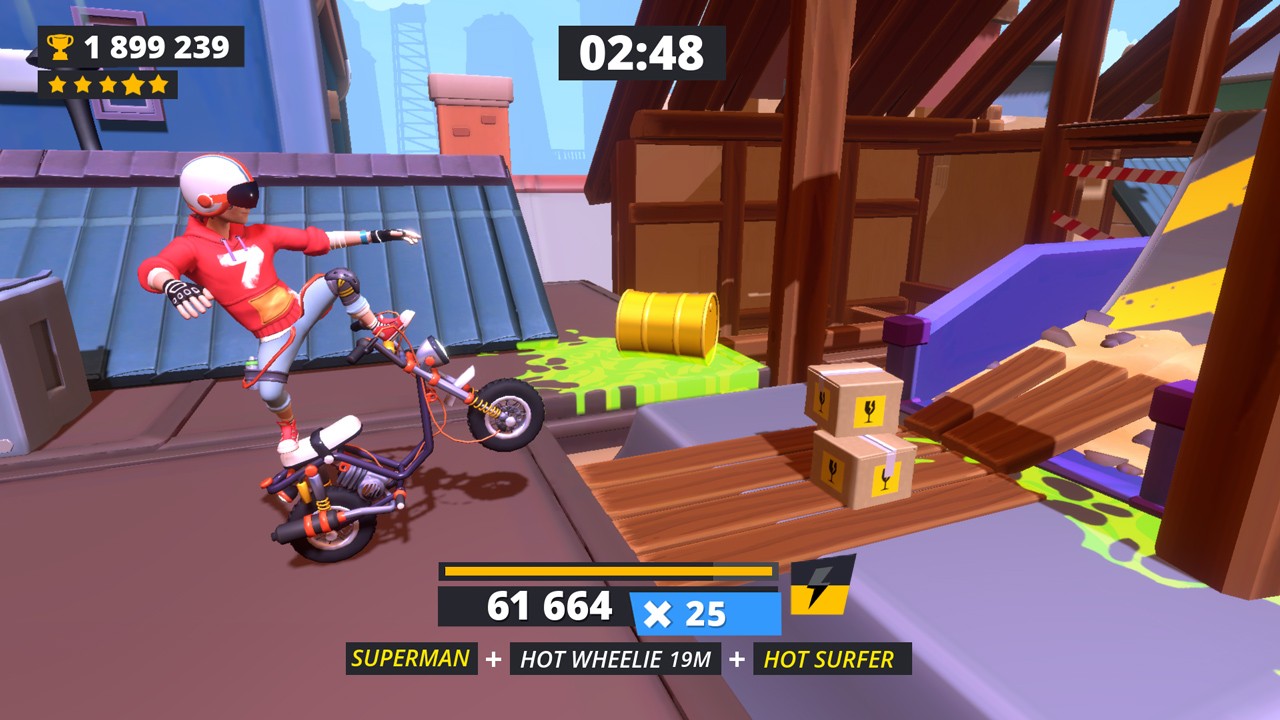 While I liked the presentation and the Tony Hawk Pro Skater element, Urban Trial Tricky doesn’t have the longevity to keep playing. That’s not to say that it’s a bad game – far from it – but it does feel a little bit of a novelty once you’ve got familiar with tracks, game modes and kitted your rider out as a hotdog. As someone who likes the grind and unlocking new items, it was nice to have so many customisations on offer, but it was a bit of a chore to have to unlock each stage one at a time before progressing. Not always a bad thing, but it was a bit of a nuisance here.

Urban Trial Tricky is the type of game I would play on a commute or when I was hanging around waiting for an appointment or similar. It’s not the type of game I would actively play at home as a go-to title, but on-the-go, it has a bit more appeal than anything too in-depth, and due to the quickfire element, you don’t get wrapped up in a season of racing before you have to save and exit the game. Worth playing if the hill-climbing and trick-based games appeal to you, but don’t want anything too demanding on your time.

An enjoyable game that will enable most gamers of various skill levels to pick it up and perform advanced looking techniques with just one button press and marvel and the nice-looking graphics, but not enough to lure you away from whatever it is that’s on your playlist at the moment.