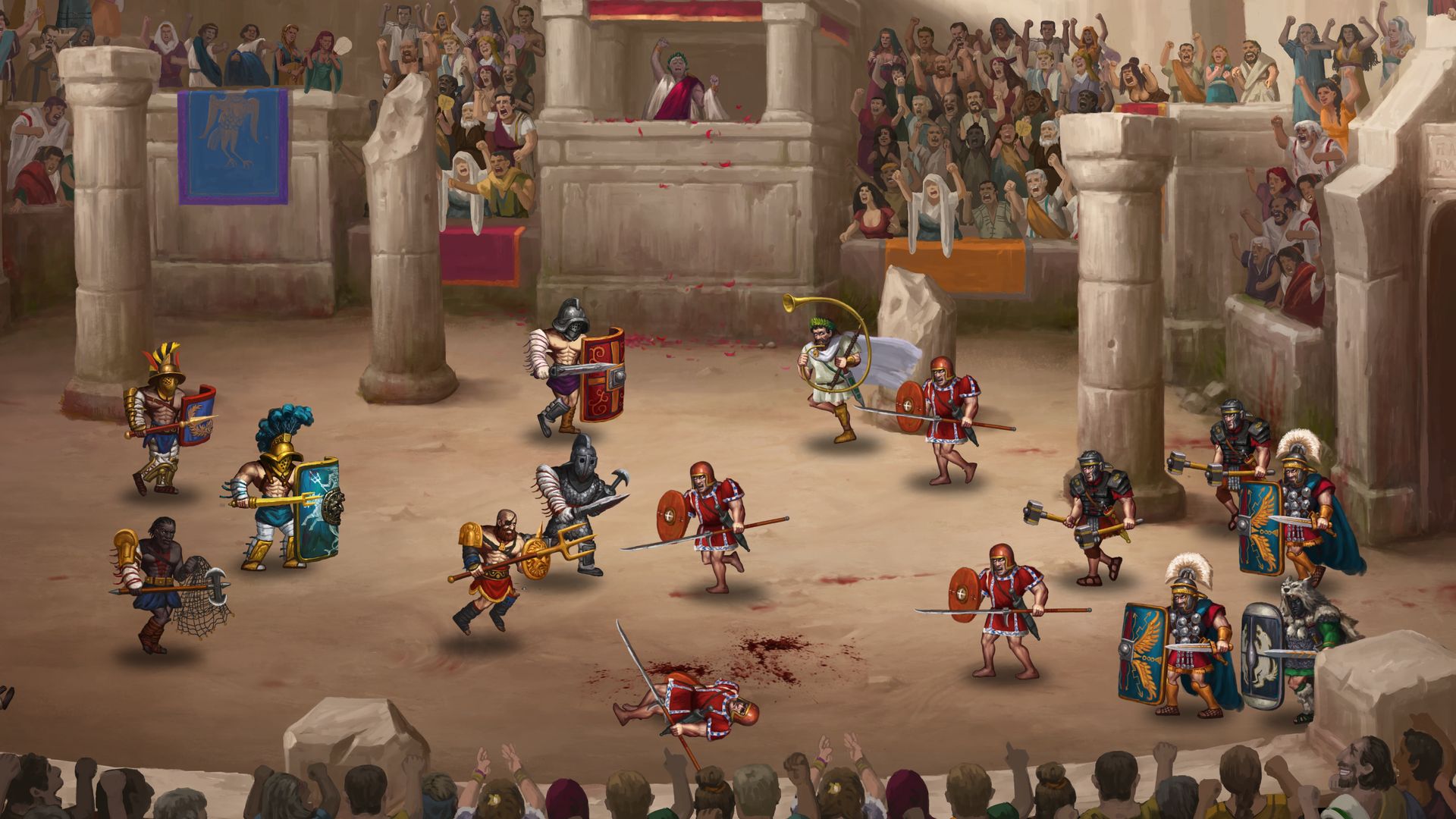 Being someone who has a massive affinity for ancient cultures, the idea of playing a video game based in the Roman empire, playing the Romans’ favourite sport, was greatly appealing to me. Story of a Gladiator offers some very competent gladiator combat, with some good variety and a nice art style, yet it all feels out-of-place being sold for £10 on a home console or a PC as it seems to play much more like a high-end mobile game.

Your goal throughout the campaign mode is to fight against the warriors of Greece, Carthage and Rome until becoming the champion. The gameplay is a rather simple beat-em-up, where you’re given a basic attack, a block move and an ability to run at the start.  A leveling system is also at play, allowing you to invest skill points into additional moves and abilities such as being able to kick back or decapitate your opponent, or increase your stamina and improve your running ability. There are also shops that sell you weapons, shields, armour, healing items, animal companions and favours from the gods.

From the list above, it may seem that this game has a fair amount to offer with regards to developing your character and abilities, yet in-game it all feels like it never really goes beyond scratching the surface. A lot of the abilities you could potentially buy are fairly useless, I got through the game fairly comfortably without any healing items or consumables and once I did have an animal companion to fight with me, I realised how unbelievably useless they were, even when fully upgraded. 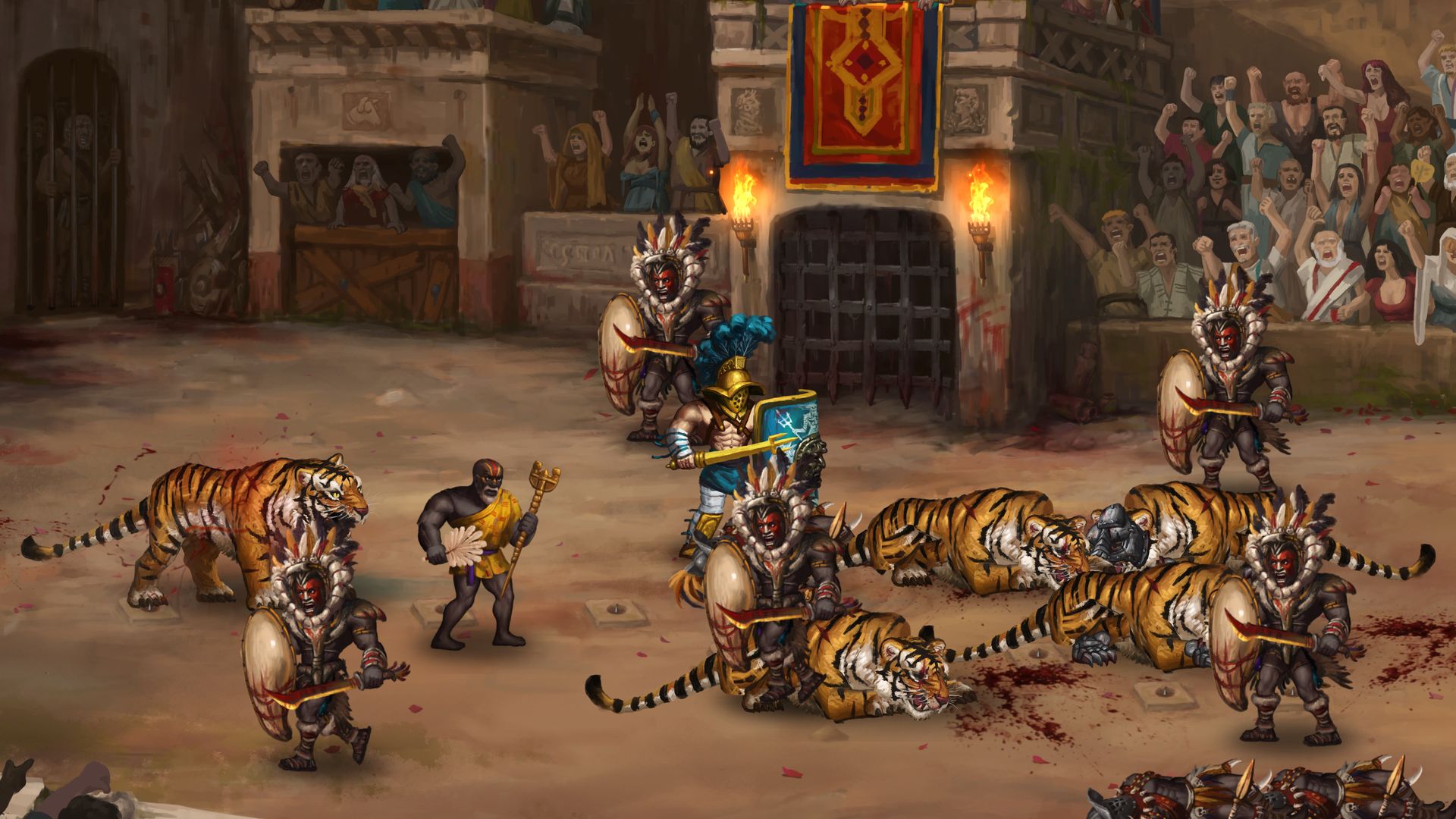 The AI seems to be quite unreliable for the Panther especially, it would hardly ever attack my opponent and when it did, hardly any damage was done to enemy gladiators. For that fact that animals will also fight against you in the arena, it seems like an oversight to not have much visually to distinguish between your animal companion and the animals who are trying to attack you.

An interesting mechanic was the ability to win over the crowd by getting triple kills or decapitating your opponent, causing them to throw rocks at enemies or throw food at you to allow you to recover your health. It offers a semblance of risk-reward gameplay which, while it offers some good surface-level twists to the gameplay here, could definitely be developed further if any future similar games were to be made.

My go-to strategy for the fights was to level up both the damage I would do when attacking enemies from the back as well as make sure I had the dodge roll ability. As a combo, these two trivialised the game somewhat as all I had to do now was roll behind the enemy and button-mash my way to glory.

This even worked on the boss fights, once they were stunned once I could mash the attack button until the fight was over. Instead of the boss fights being a showcase of the game’s combat at its best, instead, it felt like it exposed how shallow the game could potentially be if you just exploited this one ability. 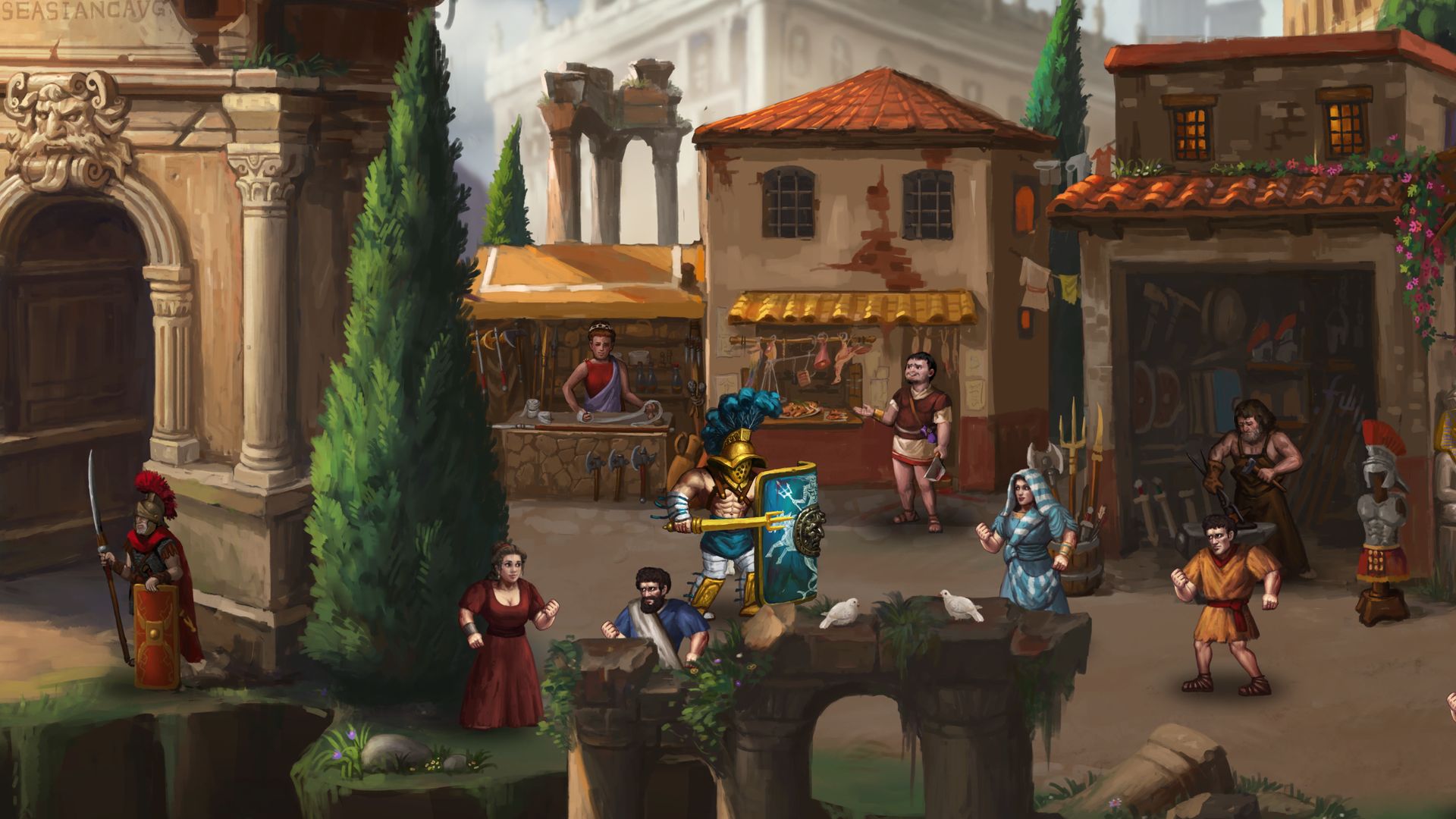 The game is quite short as well, completing the entire campaign will probably only take you 3-4 hours. In order to increase replayability, in the campaign, each of the 36 levels will give you one to three stars based on your performance. Hoping to expend your time spent with the game is a tournament mode alongside the campaign mode, where you have to survive 15 waves as a pre-built gladiator getting to upgrade yourself and your equipment with a single skill point in-between waves.

Tournament mode is a real highlight for the game, the ability to play it co-op with a friend as well also add a local multiplayer mode which too many games these days are lacking. The fact that you have only one or two upgrade points to spend after every round means that I couldn’t exploit the ability to dodge roll behind enemies and attack them from the back anymore as I needed to upgrade my weaponry and armour instead, making for much more balanced and rewarding gameplay.

Overall, I think that the core ideas within Story of a Gladiator are all very impressive and the core design certainly has potential, yet I can’t recommend spending £10 on it when it feels more like a high-end mobile game than something which should be released on console. Were it half the price, it would be much easier to recommend, yet I doubt the highlight that is tournament mode will have people sticking around for very long once they’ve finished the campaign.

I think that the core ideas are all very impressive and the core design certainly has potential, yet I can’t recommend spending £10 on it when it feels more like a high-end mobile game.