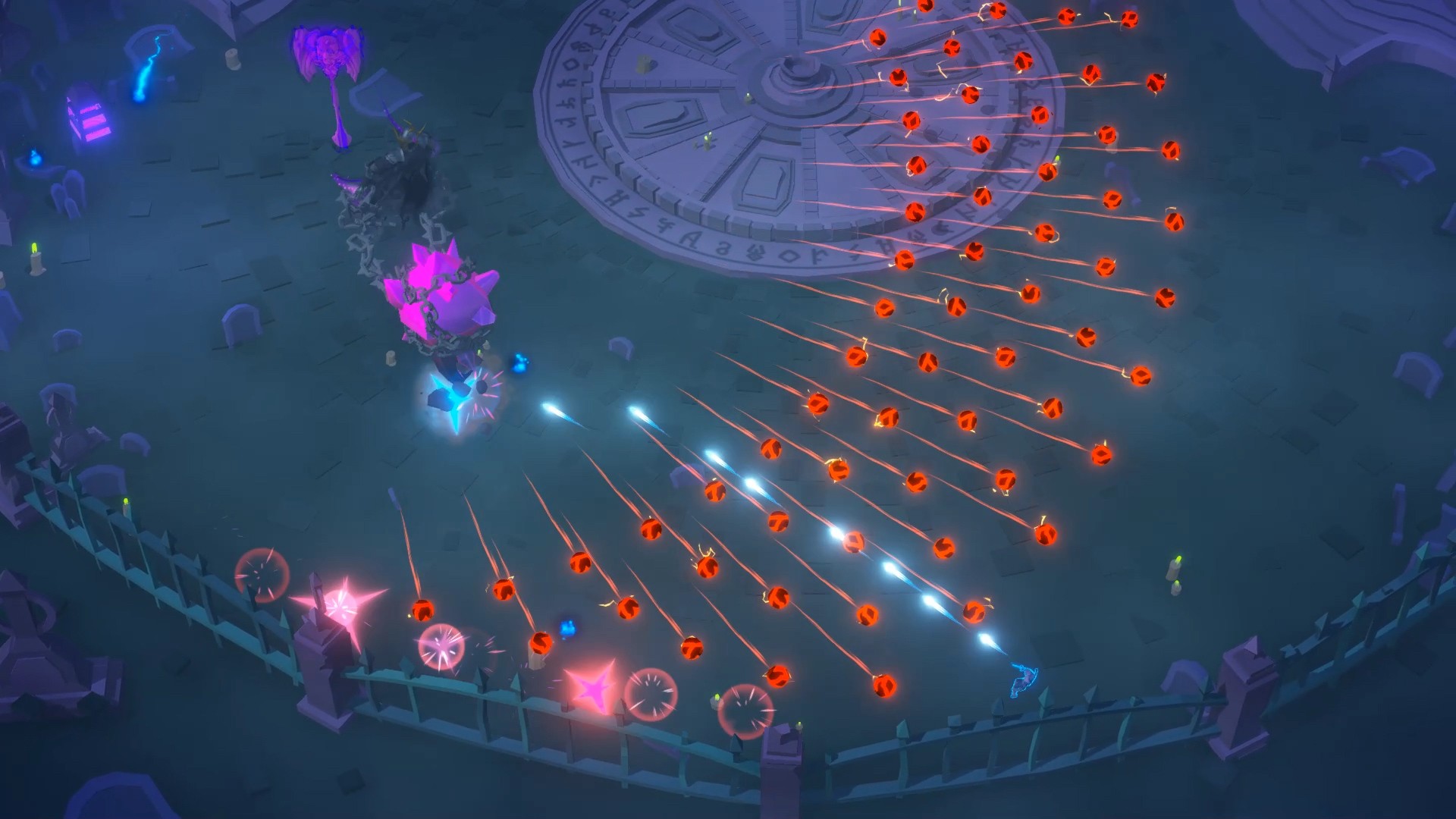 There is no wonder why ‘Profane’ is the Winner of Tencent’s Games Without Borders award for “Best Action Game.” As a 3D, time-based bullet hell, boss rush, it is action personified, so buckle up, because things are about to get intense. In fact, if there is any way at all to describe Profane in one word, it would be intense. It’s fun, it’s frantic, and it will undoubtedly cause you to spew some profanities! Released on Steam last year, “Profane’ now finds itself available on the Switch, and it feels like it’s right at home on the console.

You play as Talaal, a Herald, and the last mask bearer. In a beautifully designed intro, which reminded me distinctly of Ancient Greek artwork, we discover the backstory to this game. Years ago, a godlike being created the earth, and in order to preserve it, divided its power into seven masks, which were awarded to beings strong enough to wield them. These masks, in an almost ‘One Ring to rule them all’ style, grant the Heralds great power, and as we know, with great power, comes great responsibility. Power corrupted the Heralds, and soon they turned on each other, one emerging as the victor. After the tribes of Eonora banded together, they captured this rogue, but soon a disease of corruption and darkness spread across the lands. That is until the forgotten mask calls Talaal, and her masked siblings begin to hunt her down. Personally, this story excited me. A great world-building set up always promises a precise and well-executed gameplay, and OverPowered Team really went to town on this one. However, ‘Profane’ is not a game made with a story at its heart, at all. Sure, in between boss battles, a little extra insight is revealed, but if you want a plot central game, profane will not be your fix. 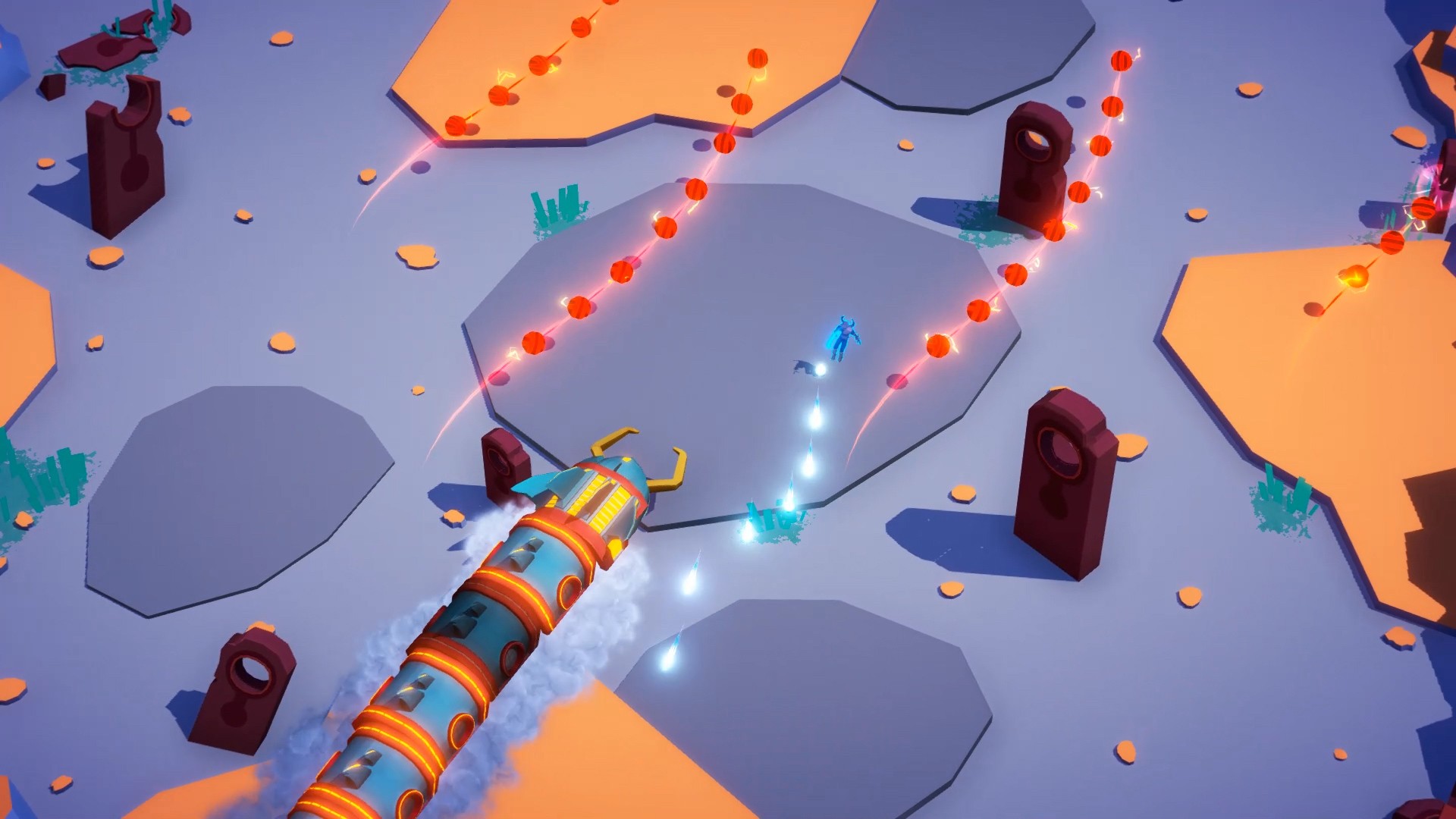 The real purpose of ‘Profane’ is to defeat Boss after ever more complex Boss, unlocking abilities as you go, and racing against the clock to do so. Your health bar also works as your time bar, and so with each hit you take reducing your HP, so too does the amount of time you have left to defeat the Boss. There’s no way to win back time, or health, so everything is down to your reflexes, skill and technique. Whilst the game works really well both in handheld and big screen linked formats, I found that refining my manoeuvres was just a touch easier on the TV. This change may seem minimal, but that fraction of a second more time really makes a difference when you realise this is a single-mode game. Without the option of dropping down to easy mode whilst you get used to the requirements of the game, things do get a little frustrating at times. Each Boss has multiple incarnations of itself for you to beat, with each level becoming, somehow, harder and harder to destroy, while trying to survive it yourself. This difficulty can sometimes become too frustratingly frantic, and I had to put the whole thing down for days on end before I could face it again. After each Boss, you get the chance to pick new skills, active- useful combative skills, but which drain your time/health bar, and passive- protective measures which come into action during the gameplay. These don’t really add much of a reprieve to the difficulty, however, so rage quitters beware!

If ‘story’ mode is just that little too complicated for you, ‘Profane’ also offers its players a challenge and daily challenge mode. These allow you, in an arcade kind of style, to play with all the abilities and levels unlocked, and gives the game replayability, that is, if you manage to complete it in the first place! The one catch remains, there is no restart, so make the most of it! I personally liked the facts that I could use these two modes as a sort of practice round before I progressed on with the story. 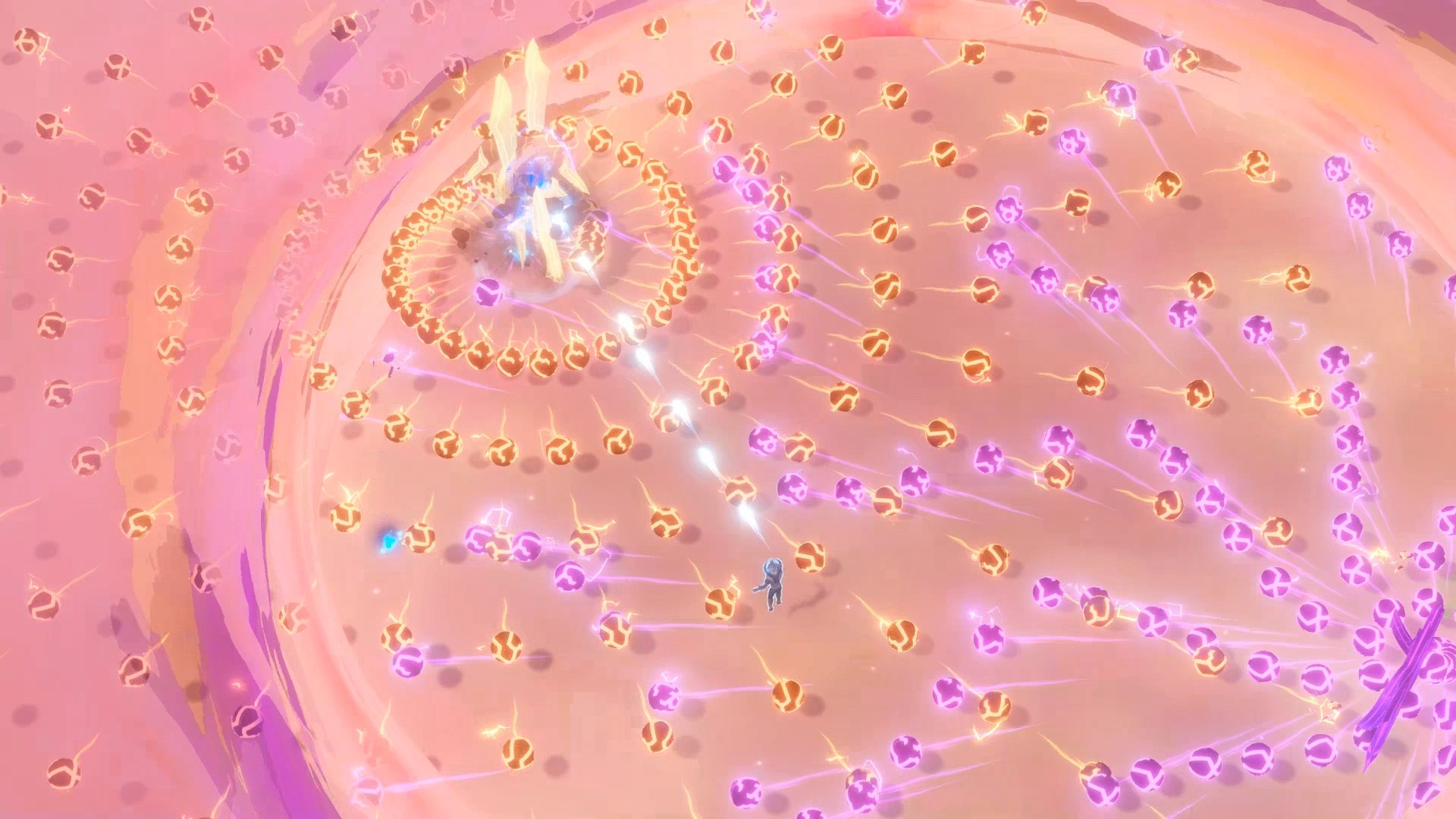 For a game with relatively little narrative, the gorgeous graphics really do make up for it. Bold, bright 3D graphics set against deep dark starry backdrops mean that every frame pops. Each boss design and environment is different, meaning you never know what attack you will face next. Both Boss and arena go hand in hand and are the challengers in their own right. As previously stated, the opening crawl of sorts has a really distinctive design to it, and if I had a tiny gripe, I would say really wanted to see more of that in play throughout! The soundtrack equally does a fantastic job at creating the frantic tension the development team wanted to instil, while also being perfectly suited to the atmosphere and setting of the level being played. Everything feels as if OverPowered Team has really put a lot of time and energy into Profane’s execution, and it makes up for the otherwise forgotten narrative plot.