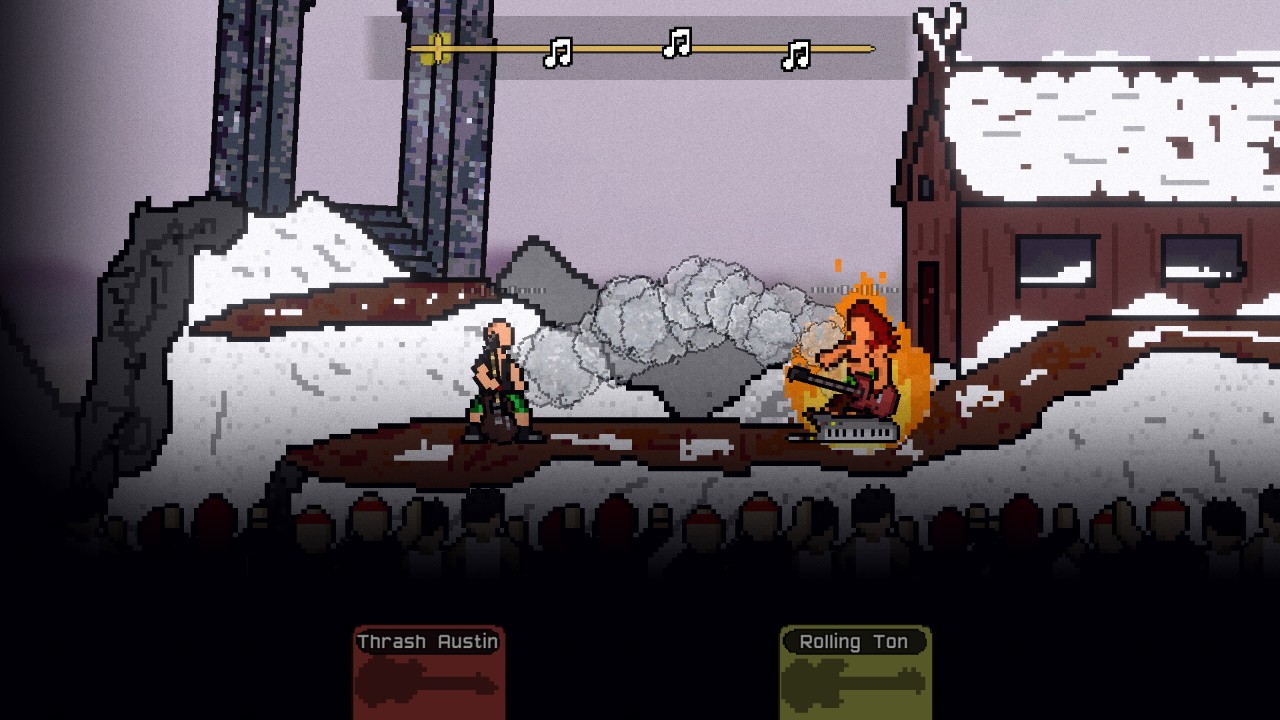 Music to my ears. Too easy? It’s Raining Fists and Metal couldn’t be a better concept for rock fans everywhere: battle it out á la Smash Bros. Ultimate, only the axe that you wield is not a literal axe. Instead, your weapon of choice is an electric guitar waiting to be shattered into splinters on a rival’s face.

It’s Raining Fists and Metal puts a variety of gaming genres into the melting pot and attempts to turn the heat up to 11. But the temperature here is only lukewarm: it doesn’t feature the face-melting solos one could hope for, or the familiar snap of a metalhead’s neck each time they go in for a headbanging session. First and foremost, It’s Raining Fists and Metal is a beat ’em up, closely followed by a rhythm game then platformer, but the latter is more to do with the arenas in which you play.

Our path towards the Rock Hall of Fame begins with the character selection. Choose from a variety of guitarists that cover a handful of rock genres from hair metal to classic rock, as well as thrash, featuring shirtless cargo shorts-wearing loonies with their guitar hanging by their ankles. It’s a nice touch that there are a variety of styles to choose from and they haven’t been shoehorned into all looking like members of Steel Panther.

Once you have your character, you can customise with a colour selection and then a guitar. It’s purely cosmetic, but quite surprising how many guitars you can choose from. If you know your guitars, there’s bound to be a variation in there to choose from that will appeal to you. Now that you have your ‘warrior’ you can experiment with the unique control system. 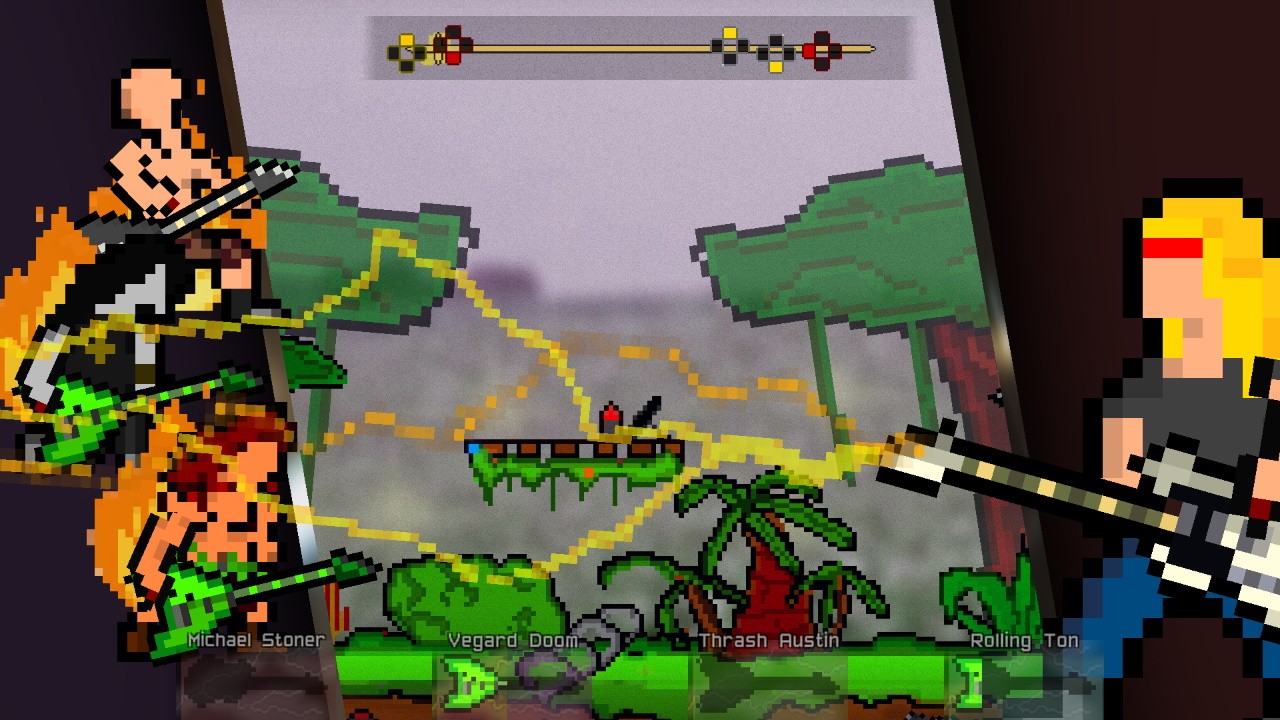 In a similar mould to Crypt of the NecroDancer, you need to time your moves in unison with the rhythm of the music. A metronome will play to help you get into the swing of things, but there is a visual display of the next note indicated at the top of the screen. There is a standard attack with your guitar, defence, mosh and jump. They’re all self-explanatory, but with mosh, instead of rallying up a burst of energy or some sort of buff, it lures your opponent to you so you can give them a bash over the head with your guitar. Enticing opponents your way isn’t always a typical beat ’em up strategy unless you have something up your sleeve, so it’s an unusual method, which soon makes sense.

Aligning your moves with the rhythm, gives it a bonus: harder hits for an attack, or if you defend at the right time, you will counter your opponent. As these are the best moves, you find that you spend a lot of the time standing still so that you can watch the notes overhead. Of course, you could listen to the rhythm and time your attacks, but I ended up standing on the spot and just pressing the buttons in time with the music. Unlike Crypt of the NecroDancer, you can freely move around the arena without any penalty – the same with attacks as you can hit your opponent any time you like, it’s just that the timing is critical and best suited to the rhythm.

The appearance of the game is ok. It’s a low-key indie game without the frills, but it serves the purpose. The characters move around at a swift pace and are animated in time with your actions, but it doesn’t feel like they’re ‘rocking’ entirely. However, it’s the music that was the biggest letdown for me. Considering this is a game with the theme of rock, the score is very synth-like and dampens the sounds of a real guitar loaded with overdrive.

In most cases, I’d probably have either turned the music off or at least turned it down, but it defeats the objective of the game – what with it being about rhythm and all. It’s not terrible as such, and if there were a better example of instruments, it could have been much better. Not being a game developer, I can only surmise that it was a budget restriction or taking into account the graphics, for them to ‘link-up’, it needed to be of the same quality. As a big music fan – especially rock, I felt it was a bit poor. 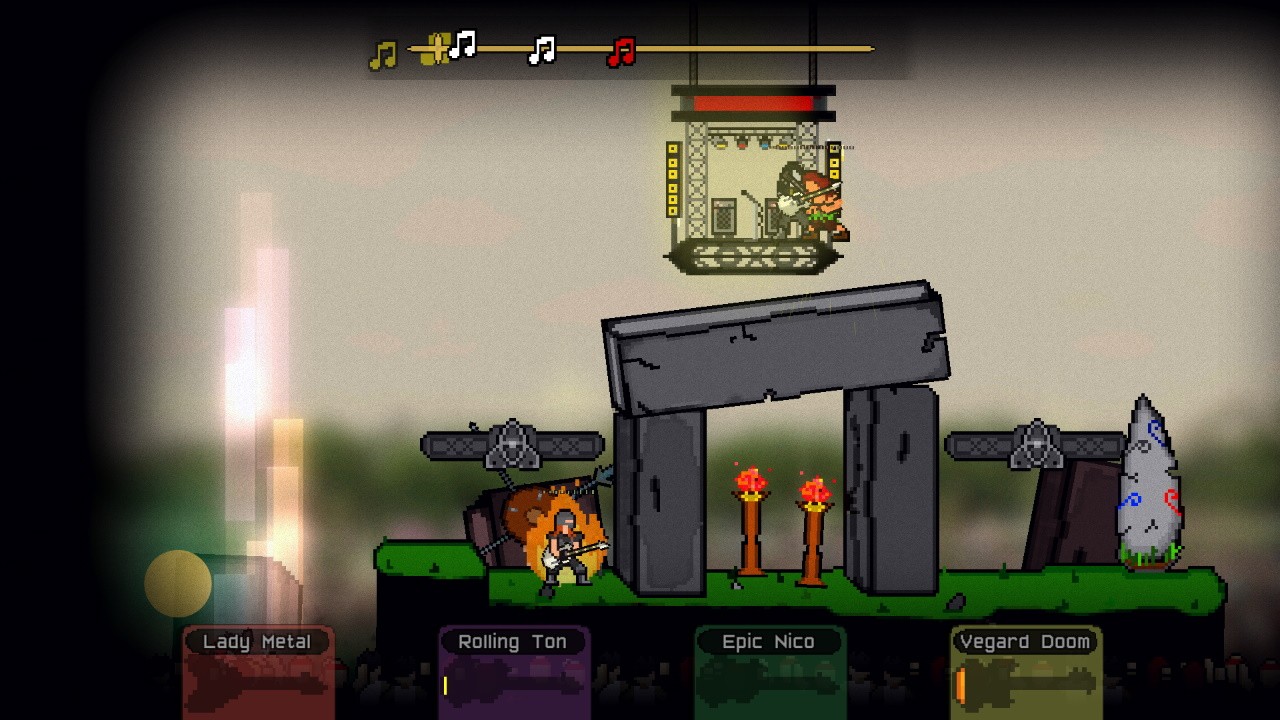 Still, the idea is a good one and considering the popularity of Smash Bros Ultimate, there’s no reason why there can’t be more games of its type out there, and It’s Raining Fists and Metal does have a good deal of variety. Granted, there isn’t a roster as large as the title mentioned above for obvious reasons, but it’s a good selection nevertheless. You can take one of these characters on a story mode with interchanging dialogue between each guitarist you come across before going head to head in a battle where the best way to upstage them is to knock them off the stage. In addition to the standard multiplayer action for up to four players, you can play co-op with a pal.

Sometimes these sort of eShop games find a new light in the multiplayer mode, i.e. poor solo campaign but massive amounts of fun with friends. It’s Raining Fists and Metal remains the fundamental game that it is as a one-player. While it’s a little more unpredictable with a friend compared to playing against AI, I’d be surprised if this will have captivated enough people to go multiple rounds together. As touched upon earlier, there are occasions where you end up watching the notes at the top of the screen rather than the fight. That shouldn’t be the case in this type of game. The only time your eyes stray away should be to check the timer, your health, or if there’s a fire in your room.

I’m not the biggest fan of Smash Bros Ultimate, but I do enjoy beat ’em ups. While my general dislike for the former title is based on how hectic it is, there is a sense of urgency, skill and excitement involved – even if I’m admittedly no good at it. With It’s Raining Fists and Metal, it doesn’t have that same speed and desire for survival, instead, you either stand in one place timing the attacks for a better result, or stand still and button mash. Although there are only four characters on screen at one time and you can customise the colour and guitar of each avatar, they are by default quite similar to one another. What starts as a unique approach to the beat ’em up genre, retorts to the classic button masher, only with less appeal.

It's Raining Fists and Metal Review

One for the metal fans or is for those with a sweet tooth for a beat ’em up? I’m not entirely sure. It’s a modern take on of the genre, only it’s more drizzle, slaps and balsa more than it’s namesake.