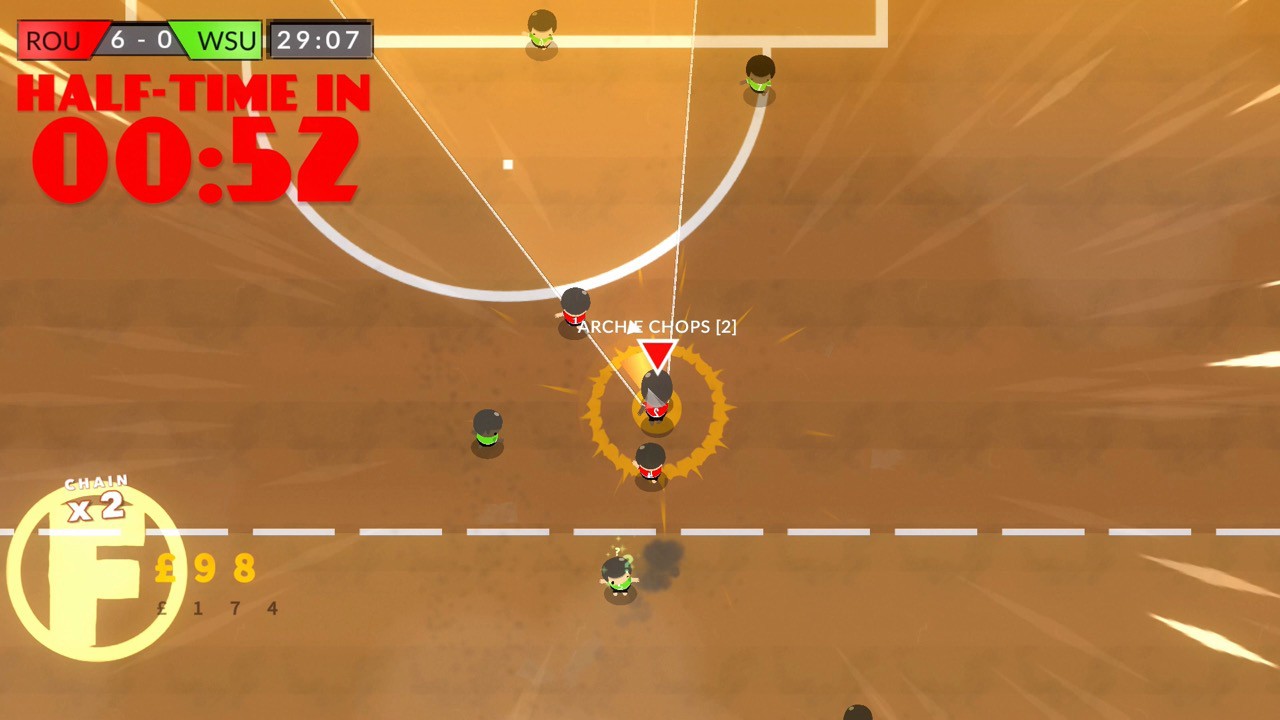 As I write this we should be approaching the halfway point of Euro 2020, with the quadrennial festival of football being hosted across the continent. In fact, earlier this week I was supposed to be at Wembley Stadium for the Group D game between England and the Czech Republic. Alas, I’ll now have to wait until next year and, despite the ‘behind closed doors’ return of the Premier League, Bundesliga, and a handful of other leagues around the world, I am still missing the thrill of watching a match in person. So when the chance to review Behold The Kickmen: Ultimate Football Edition came along, how could I say no?

To keep with the sporting theme, the Nintendo Switch port of Dan Marshall and Size Five Games’ indie arcade game fails to get over the first hurdle in satisfying my urge for all things football. For it’s a football game, but it’s not really. In essence Behold The Kickmen tries to hark back to hits like Sensible Soccer, and also take the mick out of football culture and existing football games on the market.

For starters matches take place on circular pitches, goalkeepers are untouchable, and there’s no referee. Before booting up for the first time, forget everything you know about the beautiful game. 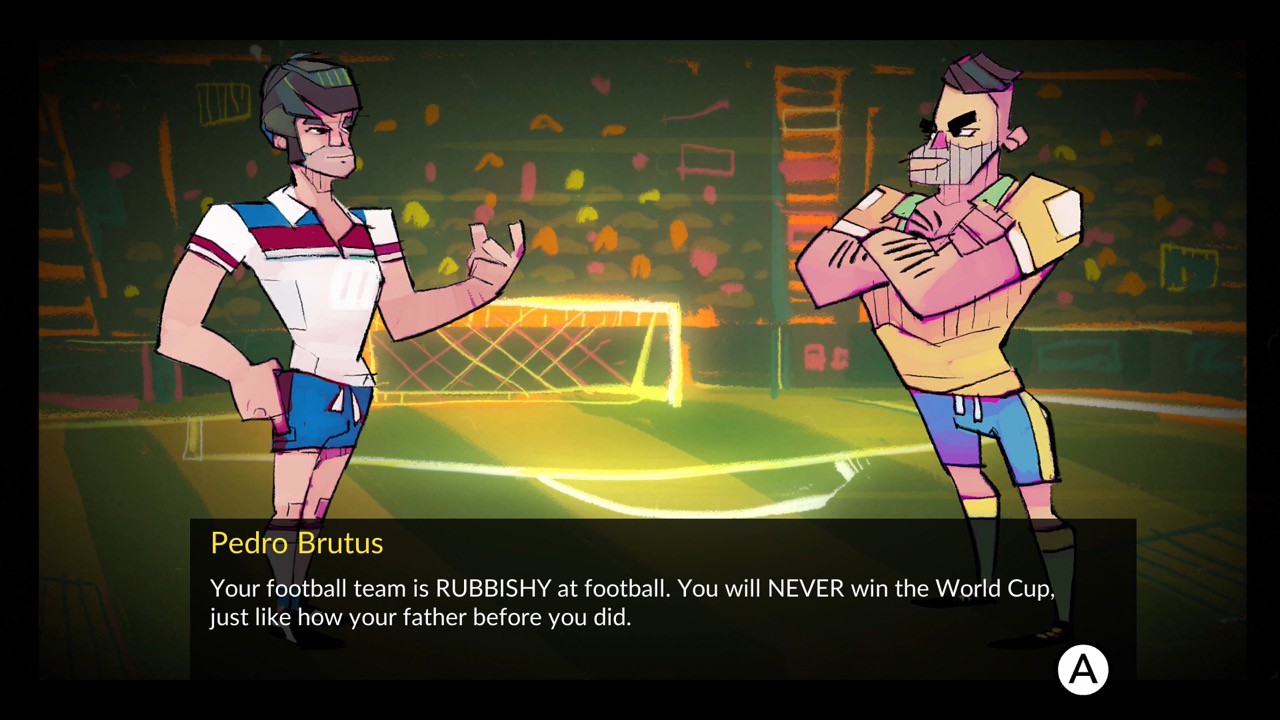 The main game takes the form of a league pyramid where, starting at the bottom, you must work your way up to become the best team in the country.

It’s accompanied by a plot, of sorts, which is pretty vague and confusing. Cutscenes try to introduce a background story, not that one is needed in the first place, where two crudely drawn characters banter with one another. That is every cutscene after every match you play. And it adds nothing, for the plot has no impact on any aspect of the gameplay. What is the point? (Apart from adding in a section that the player will desperately want to skip).

This mishmash of ideas is then combined with something you’ll only find in the array of copy & paste management sims that flooded the market a couple of years ago. To upgrade your team you need to beat opponents, for which you are rewarded with money. This money is then solely used to upgrade a distinct set of attributes of your overall squad. This pretty basic mechanic, which only allows you to impact a handful of base attributes, seems shoehorned in at the last minute to give the title an extra dimension.

And it’s with these new modes and cutscenes that it’s clear the development team are trying to be funny, but they’re not. The humour just comes across as juvenile with, for example, ‘funny’ on-screen messages when players commit fouls. Plus the new rules just don’t live up to their promise – it’s both too different and too much like the same old format.

Accompanying this is a dated drawing style, carbon copy players with no personality and drum ‘n’ bass blasting in the background. There seems to be a real disconnect with what the developers have tried to do and the finished product. 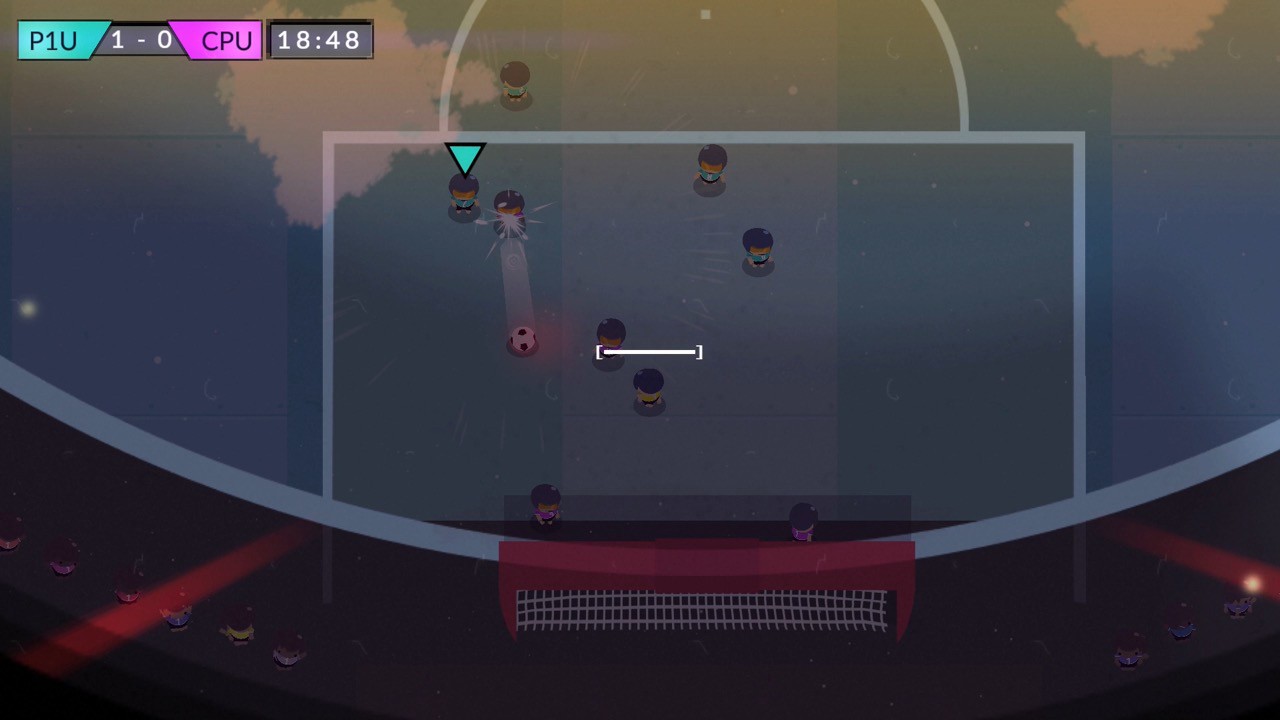 Despite this disconnect, it’s clear they’ve tried to teach you the way their newly invented sport is supposed to be played. Whilst the controls aren’t what you’d expect from a traditional football game (but that is the point I suppose) and they are a little fiddly to get your head around, there’s an in-depth tutorial to guide you through each one. It does take time, however, to fully master these as essentially you’re relearning how to play football all over again.

Early games in the Championship are pretty easy, presumably to allow you to become accustomed to the controls, plus the slow addition of new gameplay mechanics gives you that time you so desperately need. However matches are made harder, and arguably more tedious, by the incredibly slow movement of players – you spend an age urging your player to move faster.

Whilst you’ll find couches full of teenagers across the world dedicating hour after hour to their FIFA Ultimate Team or PES Master League, you won’t find this with Behold The Kickmen. I know this isn’t the point as the developers tried to make a fun, quirky, arcade sports game that isn’t a sports game – but it’s not that either. It’s slow and boring to play, irritating to look at and listen to, and provides little in the form of a cohesive arcade experience.

Like when Manchester United spent £59.7 million on Angel di Maria in August 2014, you’ll only end up disappointed and wanting to ask for your money back.