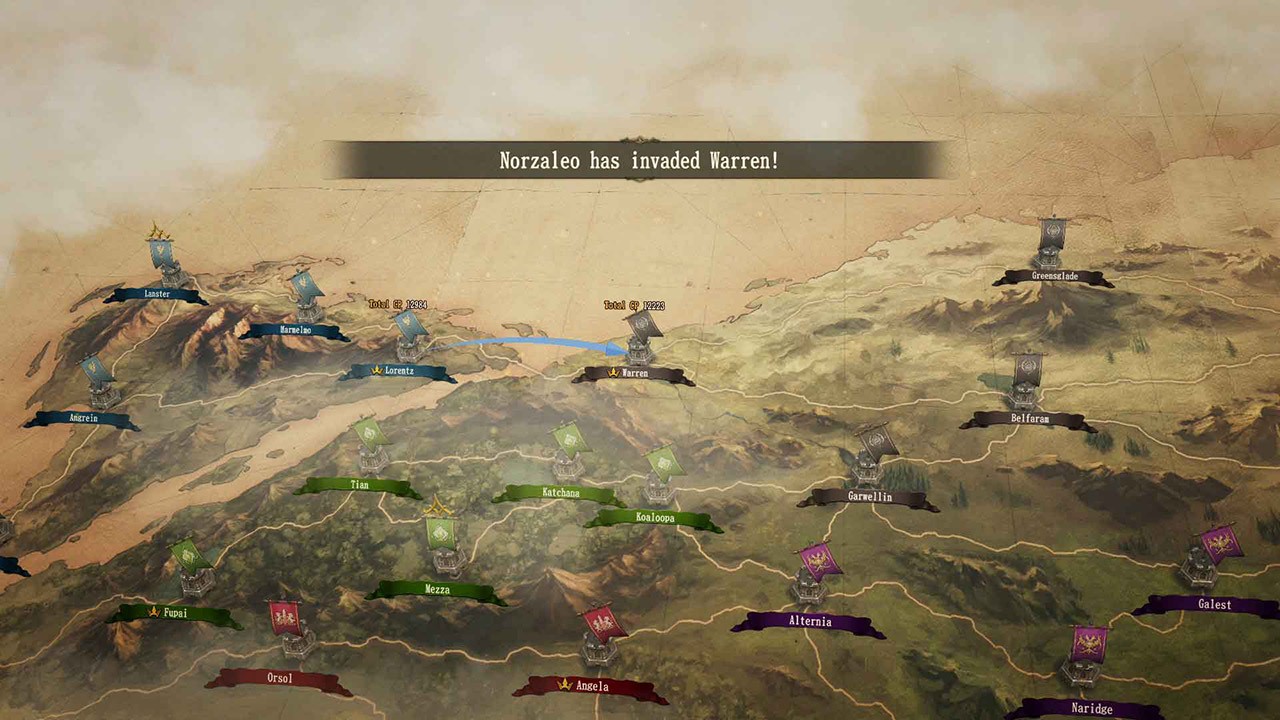 I lost my first battle in Brigandine. Despite following all the rules the tutorial taught me, despite thinking I had this complicated system down, my commanders were quickly overwhelmed, forced to flee the battlefield. The enemy forces swooped in, took over my base and pushed me back to my borders. I licked my wounds, composed myself, and my second battle went better, despite losing a beast of a centaur in the process. The rest of the season went in a similar fashion – a loss here, a win there, but while the victories were satisfying and the defeats disheartening, I quickly realised something. Brigandine offers plenty of longevity, but it quickly falls into a rinse-repeat cycle that tires faster than it can keep your interest.

It’s a bit of an oddity, is Brigandine – a fairly deep, turn-based strategy that stands well on its own, but doubles as a sequel to a little known, and frankly average PS title from the late 90s. Despite a lukewarm reception from critics, the first title has formed somewhat of a Cult following, obviously proving popular enough to spawn a sequel over 20 years on. Initially, Brigandine is daunting, a huge map with six distinctive areas belonging to each faction. As the leader of your people, it’s your job to plot your way across the map, slowly overcoming enemy strongholds along the way until you’re the only ones left standing.

There’s a lot that makes Brigandine feel similar to other J-RPG strategy titles, but Brigandine is a far more serious affair than many titles of a similar ilk. The six factions that make up Runersia are all fighting for control, leading to a grandiose war spread across the realms. Each faction has a unique storyline, with their own motives and leaders, even if the monstrous creatures your rune knights control don’t change between clans. There’s plenty of lore to explore for each faction, plenty of static cutscenes to read through, and a storyline that expands as your adventure does. Granted, the whole moody, fantasy J-RPG shtick wasn’t for me, but It’s great that it never slips up, constantly expanding the story every time you meet a new character or hit a certain beat in the adventure. 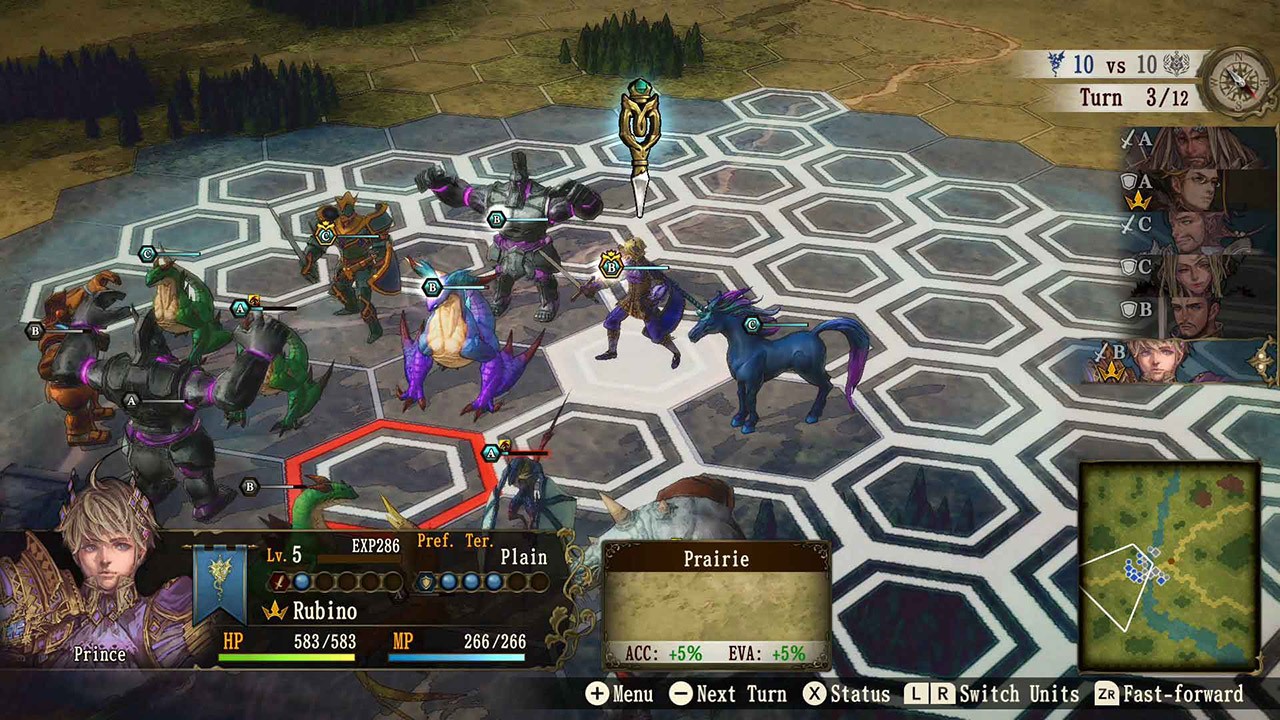 Rounds (or seasons, as they are called in Brigandine) are split over an organisational phase and a battle phase, both of which are incredibly deep, with plenty of options to feel like you’re fully in control of your quest for power. After picking your faction (for my adventure, I began as The United Islands of Mirvela) you’re thrust into the organisation phase to plot your first moves. Each stronghold can hold up to three teams made up of your commanding rune knights and their legions of monsters. It’s important to move your units to properly defend points, and position them to successfully take enemy land.

For the first few rounds, this is about as much as you need to do when organising your armies in Brigandine. When you’ve completed a few battles and earned the necessary resources, the organisational phase also becomes the place to kit out your commanders with stat-boosting items, as well as spending hard earned Mana on new creatures. While, initially, this first part of Brigandine looks complicated and intricate, it’s actually pretty simple to indulge in. It especially helps that enemy AI plays the game properly, attempting to take your poorest defended areas first, as well as reacting well to any particularly strong invasions you’ve attempted in previous rounds. It’s a strikingly addictive system, and watching your carefully laid plans come together (or even fall apart) is very enjoyable.

In comparison, the battle phase is more of a meat and potatoes turn-based affair, taking it in turns between your teams and your enemy teams to outwit each other. The first couple of battles are interesting, especially learning the inner workings of each type of creature that you control. Quickly, however, you realise that every battle is almost identical. No matter how far you get into the game, every battle sees you move samey monsters across samey maps to take incredibly dull land from your enemies. It’s simply not interesting enough to not feel like a chore after the first five or six rounds, especially as, at some points, you have to endure a lot of battles per season. 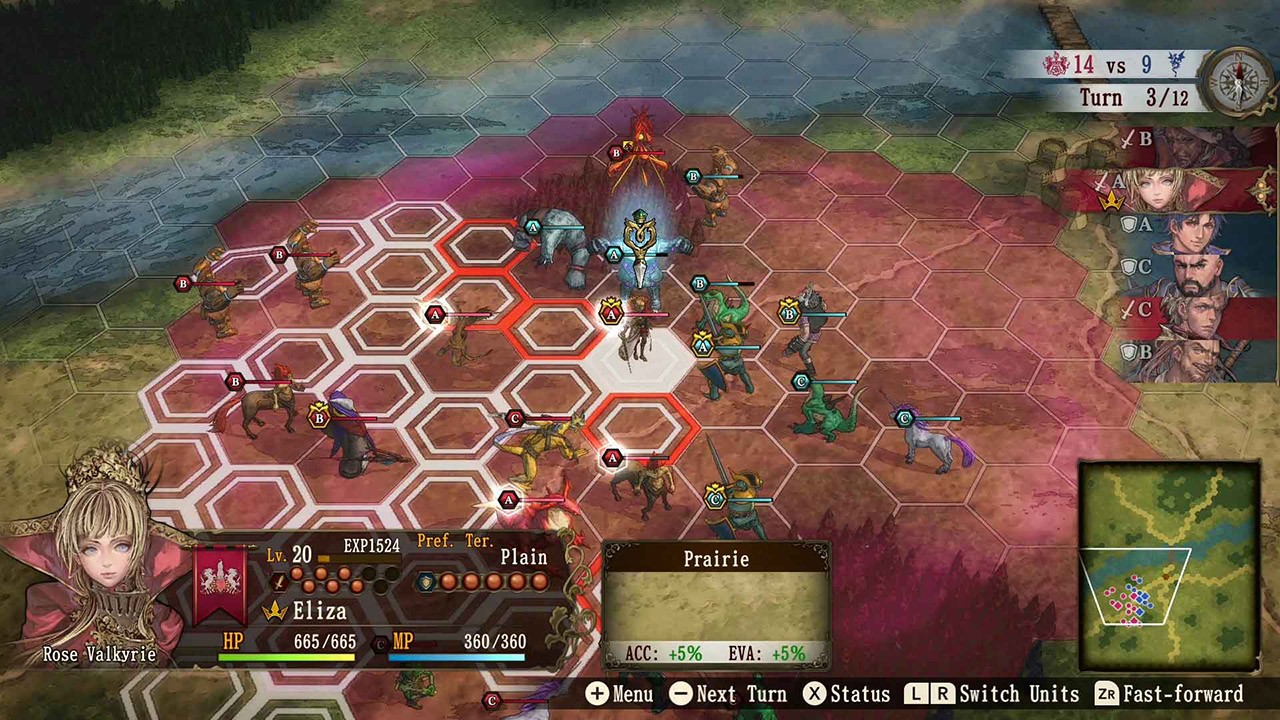 It doesn’t help that, as strategic as the game wants to be, most battles give victory to the player who can flank their opponent before they flank you – it’s less strategy and more a game of luck. Combat is serviceable, but mostly uninteresting, and shifting your units across a sea of hexagonal spaces to sputter out slapdash attacks leads to some of the least satisfying fighting I’ve experienced in a strategy title in a while. Each creature has different attacks, but there’s an alarming lack of uniqueness from a bunch of fairytale monsters. It’s utterly charmless, and despite the different animations for each move, nothing really feels powerful to use – it feels a little weightless. Don’t get me wrong, there’s a lot of different moves, spells and considerations to make (like your usual terrain effects, etc.), but I didn’t enjoy using a single one.

That being said, however, to absolutely destroy an enemy team, sometimes leaving you a monster or two to kidnap as your own in the process still makes you a little giddy. It’s also easy to get attached to the mermaids, dragons and the rest of the mystical beasts the game puts you in charge of. Successfully surviving battles and defeating enemies allows you to level up each unit, and I felt the same pangs of guilt and sadness I felt in X-Com when a prized unit fell to the fold. Despite some very good designs, Brigandine is almost as inconsistent in its looks as it is in its gameplay. During battles, maps and creatures look drab and dated, moving around on flat surfaces in lifeless, miserable worlds. Bar this though, creature designs aren’t bad in theory, they just don’t do well in practice.

Full campaigns can take an incredibly long time to finish, with my first run through taking almost 35 hours. I almost wish I enjoyed the second part of Brigandine as much I like the first, however, I can’t see myself putting in another 30 or 40 hours to see the game from another faction’s point of view. I might not be its biggest fan, but if you can see over the blatant flaws, Brigandine is a more than serviceable as a strategy game, even if half of it carries the other. It might have taken 22 years, but for fans of the original, this is a fine sequel for those desperate for more.

Brigandine: The Legend of Runersia Review

I might not be it’s biggest fan, but if you can see over the blatant flaws, Brigandine is a more than serviceable as a strategy game, even if half of it carries the other.