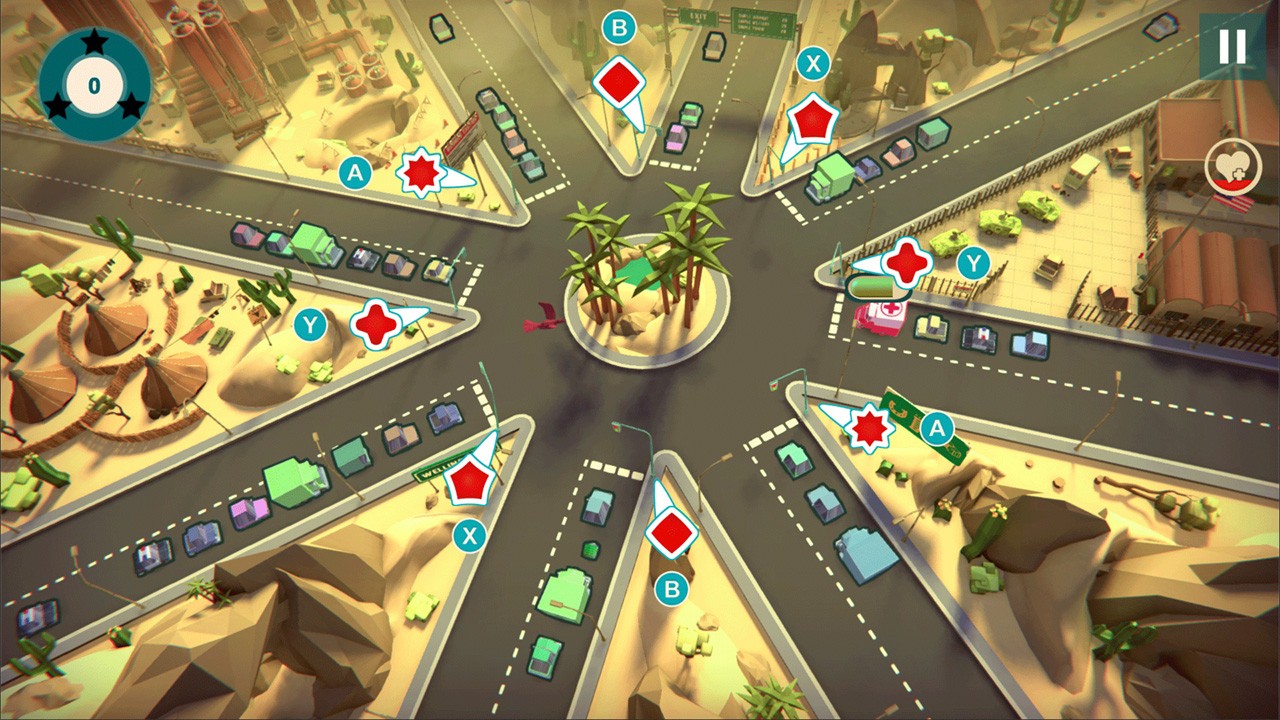 Puzzle games come in so many variations these days; some are overly complicated, others simple in their approach – but what a lot of them struggle to balance is the fun element. Your folks told you not to play in traffic, so how about playing with it instead? Urban Flow is a puzzle game that has you as the controller of all the traffic signals in a busy city with a simple goal, is easy to learn, and do you know what? It’s a lot of fun.

Void of any story elements, the game aims to manage traffic flow at various traffic signal points by switching the lights on and off accordingly. Each level is completed by getting a set amount of traffic to their endpoint without collisions. Then you can move on to the next. But, like games such as the Angry Birds franchise, each stage awards you with one of three stars based on your performance. This performance is ranked on how many vehicles you get to safety, with the cutoff point being a total of 120, for example.

The immediate dangers of working with traffic is safety. If you’re lucky enough to be working with one-way traffic, you can turn the signals on and off on the fly with minimal fuss. Still, when you get to roundabouts where you have those idiots who miss their turn and go back around, you open the route like an overflowing tap and endure the inevitable pile-up. Only, this isn’t a game about destruction, so if you’re here to get a kick out of Burnout style crashes, you’ll be disappointed. For the most part, the cars will collide and explode in an anti-climatic cloud of dust, and depending on the configuration of the level; you must restart. 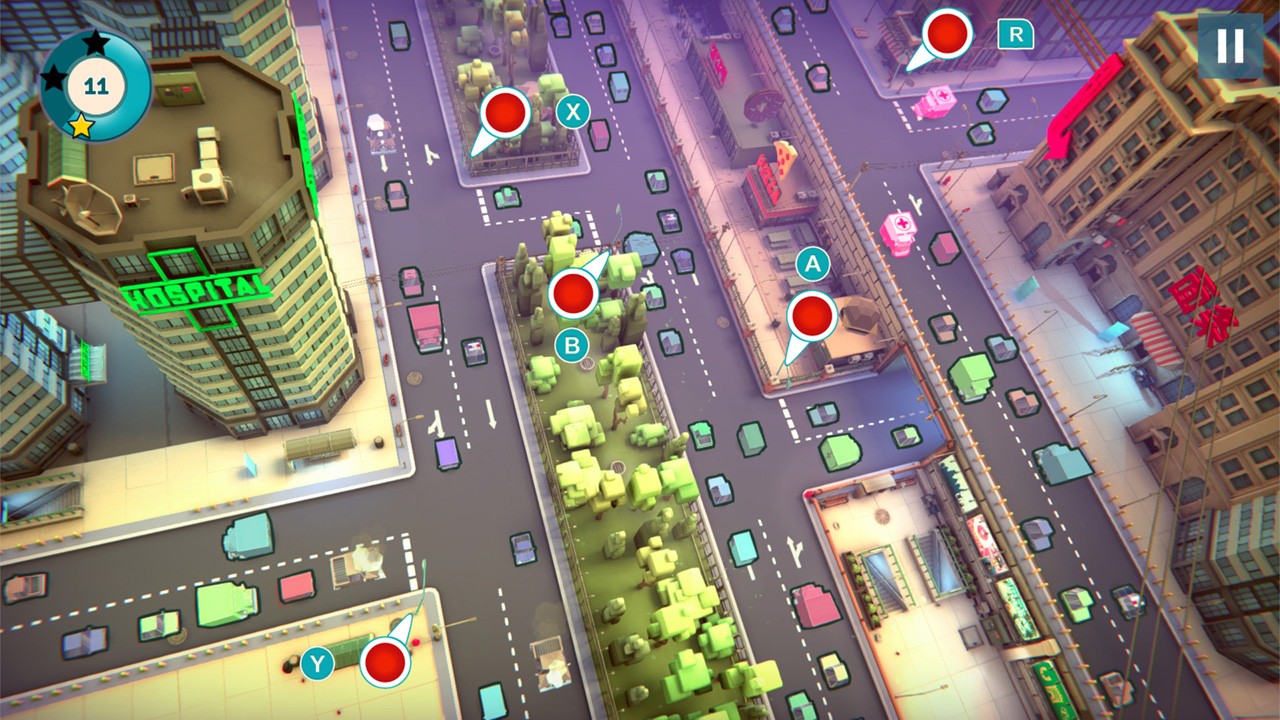 Regarding configurations, as you progress in the game, you get a limited selection of buffs to start with. The early bonus is extra lives. This doesn’t mean life in the conventional term of a continue, but if you suffer a crash, you’ll just lose a heart rather than start again. Surprisingly, it’s not too unheard of to finish a level without a single accident, but the stages are very hit and miss (an excellent play on words, don’t you think?). As previously mentioned, the roundabouts prove tricky when cars go back around the roundabout when you least expect it, and switching off the lights doesn’t always have an immediate impact. There is a power-up to slow downtime, but this is more of an eraser tool for when you accidentally let the flow of traffic through when you didn’t mean to. With the tap of a button, time slows down, and you can ungrit your teeth once more.

But it wouldn’t be a challenge if there wasn’t the introduction of other elements to put the pressure on. One of the first entries in the emergency services such as the ambulance. When it reaches one signal, you need to prioritise its importance by sending it through ASAP (a gauge appears above the vehicle to show how much time you have until it’s failed). The easy option then would be to leave one traffic light on go constantly, then switching back and forth accordingly. However… As in real life, motorists get impatient, and after so long they will start altering the lights themselves so they can get to wherever it is they’re going. A little trick I learned one only having one light on at a time, letting one car go each turn to mute them fiddling with my beloved signals. The only problem is in dual carriageways the traffic accumulates, or worse; you get the military steamrolling through with complete disregard of the lights. 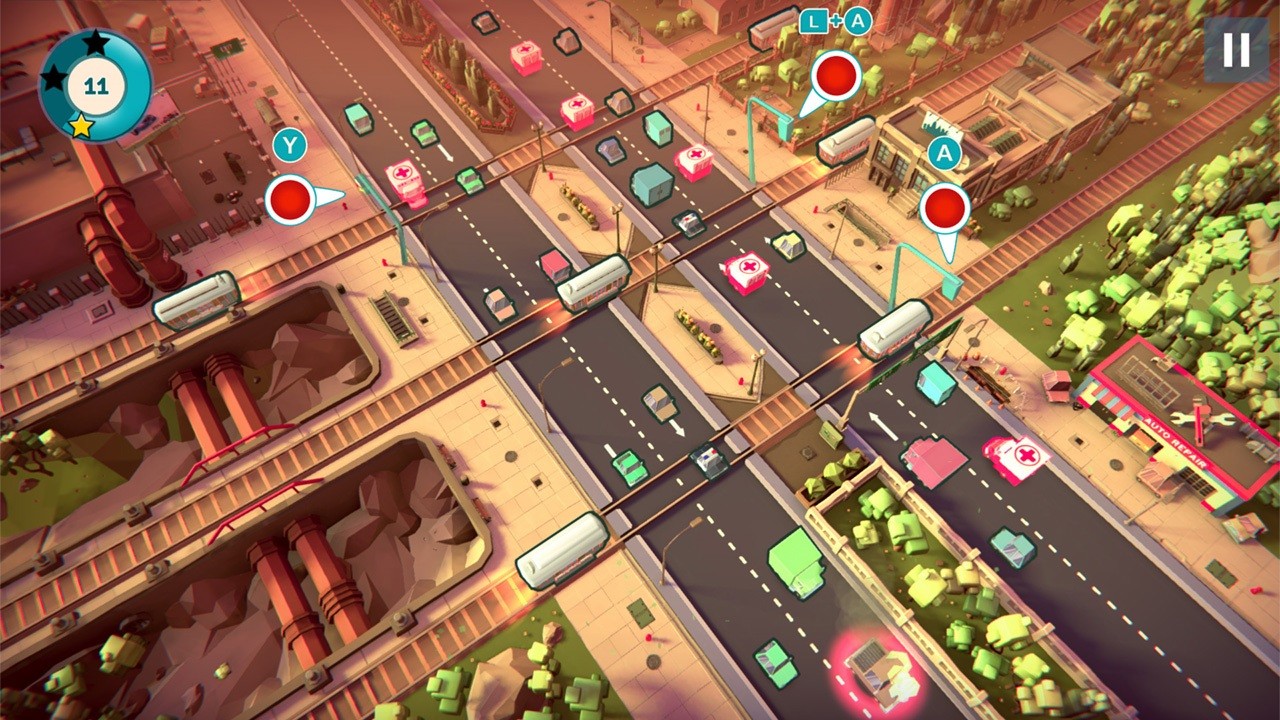 Urban Flow is about multi-tasking. The actual controls are simple; one button will operate a light; X, B, Y, etc. Then later you’ll experience combinations such as L+B, or L+A, R, and so on. If that wasn’t enough, one button can operate multiple lights at the same time. This is an absolute nightmare when introduced on a level with three lights on the same road, with oncoming traffic. While there’s urgency throughout and some levels are more comfortable than others – even later on, your stress levels are reduced by the excellent soundtrack. At first, the music comes across as YouTube royalty-free works (maybe it is?), but it’s spot-on for reversing the effects of the responsibility of directing traffic and instead, is almost a chill-out game.

There are a couple of modes in Urban Flow (in addition to the multiplayer mode, which can tipple either way of stress, depending on who you play with) such as endless mode and the chill mode. With these, there are no endgames or scores, meaning you can play god with the citizens with no consequence, admiring the excellent visuals and fitting soundtrack. If you like the look of the game, you’ll be pleased to see that there’s a gallery where you can view a 3D render of all the models in the game. You have to unlock them first by earning the stars in each of the 100 off stages.

I would say that Urban Flow wasn’t an addictive game in the sense that you must play another game, but I noted that on my first play I wanted to have a quick go and have repeat playsthroughs the week. What I ended up doing was finishing a third of the levels in one sitting. It’s not that I couldn’t put it down because of the thrill, but it was a surprisingly great way to unwind. That said, there are the odd levels that feel like a blur, and I was more than happy to scrape by with just one star as getting 120 cars across a roundabout is not an easy task.

With brilliant presentation throughout without putting stress on your digits when it comes to controls, Urban Flow is an excellent puzzle title to chill to. That doesn’t mean that it’s an easy game, but the challenge is just right, and the skill here lies in multi-tasking rather than learning in-depth controls.