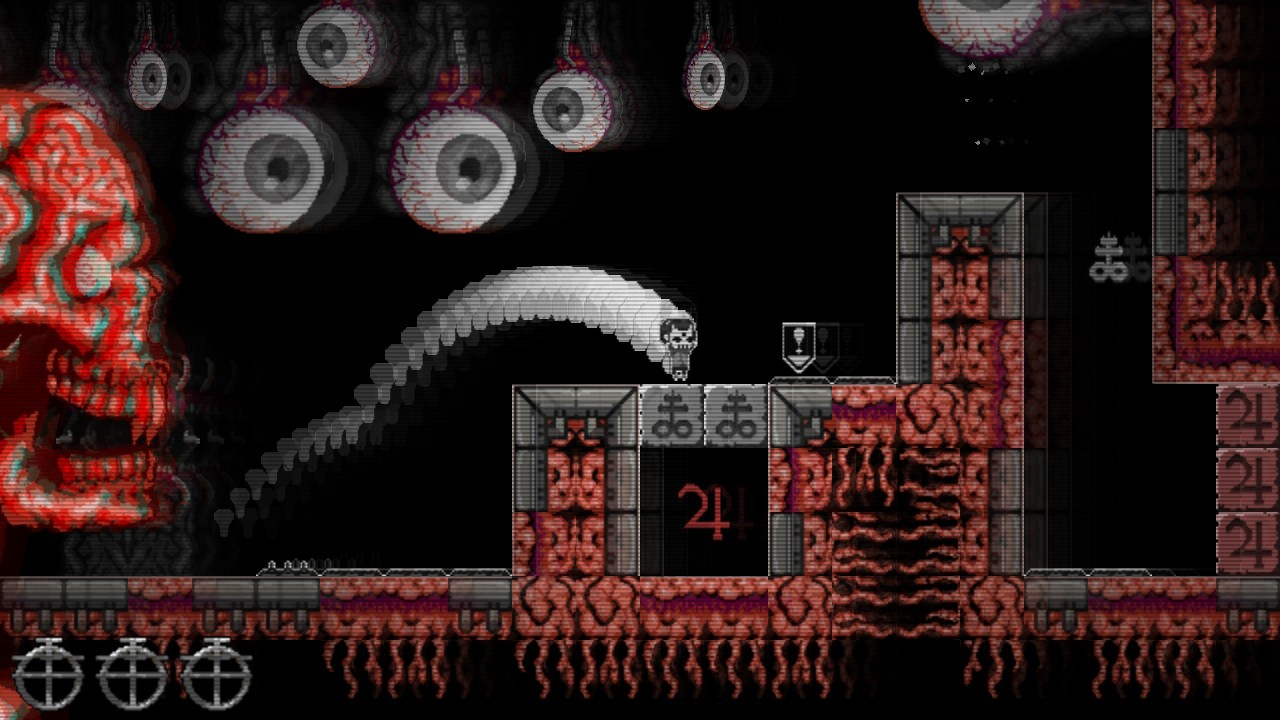 I am terrible at platform games. I would like to blame my hand-eye coordination, but it’s really because my concentration is easily thrown. It takes a unique premise for me to be interested in playing a puzzle platform type game. Tamashii is a 2D puzzle platformer developed by Vikintor and published by Digerati, which is entirely unique in design. From its boss-battles to the quirky, edgy artistic direction, this indie title piqued my interest and made me try a genre of game I normally avoid playing on Switch.

Before I get started, I want to offer a trigger warning for this game. Many of the themes and the content of this game could disturb younger players or those who are particularly sensitive to religious or demonic imagery. Also, this game has a lot of flashing lights and static which are not suitable for those with photosensitive epilepsy or some people with sensory issues. My eyes felt a bit sore after playing this for long stretches, so be advised before playing!

Undeniably a horror game, Tamashii has you play as an emissary of light exploring a terrifying temple. Your nameless playable character is a creation of a godlike figure, who is ordered to rid the temple of a corrupting force. As you make your way through the temple and its various challenges, you will encounter creepy, gruesome chambers and fight bosses who lurk in the depths. With many illusions to spiritual and biblical allegory, even allusions to specific Bible verses. Subverting subversion itself, Tamashii makes you question what you know about puzzle-platformers as the game increasingly seems to know you are playing. As the only seemingly non-omniscient being in this universe, the player is given no familiarity to lean on and has to use their wits and their reflexes to make their way through the Corrupted Temple. With frequent fourth wall breaks and even being reprimanded at one point for ‘breaking my game’, this game is unsettling from minute one.

This game was very easy to get started with, a simple tutorial showing the basic skills. Other than that, you are left to your own devices to decide how to make your limited mobility/skills in-game work for you and your mission in this temple. The player can jump, place clones of yourself which eventually expire and speed up the expiration at will. These gameplay options while few, do not limit your experience of Tamashii. The levels are varied enough and provide an enough challenge that each chamber is different and while you may recognise what you can use in certain situations- you have to work out how all on your own.

The steady difficulty curve meant I was never feeling too overwhelmed by the jump in necessary practice and skill between levels and only at the end of the game and the final sequences did I find myself stuck in working out the more difficult solutions through constant trial-and-error. The trial-and-error gameplay style is supported by frequent automatic save states which prevent you having to replay large stretches of the game when stuck with a single platform manoeuvre. Further, the ability to restart the room at any point with the +/-(plus/minus buttons) on Switch meant that while some difficult levels were frustrating. They did not become tedious. The boss battles available provide a new level of challenge as you are now being attacked while trying to figure out how to destroy the boss and even as an inexperienced player of platform games; I didn’t find myself unable to play Tamashii. 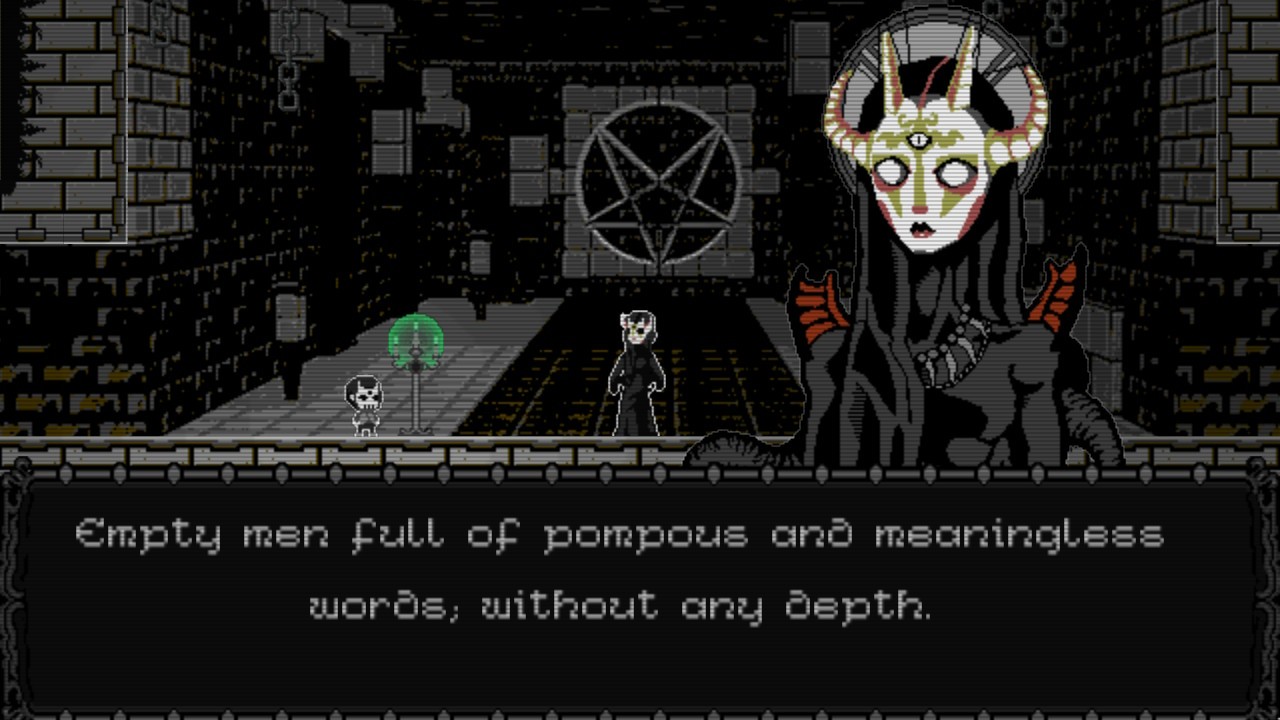 The eclectic artwork of Tamashii takes this game to another level, jazzing up a rather simple gameplay style with a touch of the weird and the meta through its art and design. The temple’s design was pretty well done, although some variation would have helped distinguish the different parts of the main temple. Despite this, each chamber felt uniquely its own. With creepy tongues bursting out from the wall to these strange bug-eyed furry creatures that have legitimately kept me up at night, Tamashii’s developer really knows how to make a scary-looking game. The fourth-wall breaks and slowly worsening static in later levels meant that the game’s artwork was constantly shifting and evolving, which made the experience unlike anything I’ve played before. Some artwork was graphic and I think maybe that the game should be rated 18 instead of 16 on the European game store, but that’s a matter of individual taste.

One thing that really let this game down for me was its use of screamers. I’m a big fan of horror games and even of jump scares when done well and executed with an intention like those of the Five Nights at Freddy’s and Slender franchises. There were several screamers in Tamashii which, in traditional, early 2000s fashion, took up the entire screen with a horrific image. These were accompanied by piercing screams. With a game with a decent narrative and such fantastic design and gameplay, the use of screamers felt lazy here. Attempting to inject narrative tension in this way when the developer has already proved their skill at creating discomfort and fear in players feels cheap and tacky.

Screamers aside, the sound effects and retro-style soundtrack of this 80s/90s Japanese-style horror game were a fantastic feature of Tamashii’s design. The developing soundtrack as the game progressed really helped to aid my feelings of fear and anticipation as I moved further through the chambers. I had to put the game down several times as the music reached a crescendo just in case I was to be shocked or when the eerie music got just too much. I recommend playing the game DURING THE DAY for the sake of your blood pressure as playing this alone in my house at night and in the dark with my earphones in was a mistake. The soundtrack leant well to establishing the stakes in each part of the game, eerie in some places and becoming downright unsettling during boss battles. My favourite piece of the soundtrack is the music in the first boss, which really kept me motivated as I worked out the boss’ fighting style.

Narratively Tamashii was a strange mixture of subtle and blatant. A surprisingly vocal, third-person playable character means that the story is sometimes told and sometimes shown. I really liked the narrative when it started, really appreciating the time and energy that must have gone into creating this world of myths and religious allusions to design an unrecognisable, tortured place to set the game in. The plot works to challenge the players’ expectations and give them a sense of freedom. A downside to this tone is that it is not reflected in the actual gameplay. Selecting different dialogue options when apprehending the main ‘villain’ of the story does little to alter the ending you receive. While the ‘appearance of choice’ Hobson’s choice theme applies to the story and works thematically, it reduces how replayable this game really is. Having multiple endings, with different choices getting you anywhere but reset to the start of a room, would have been an interesting choice – considering the branching dialogue is already present in the game. 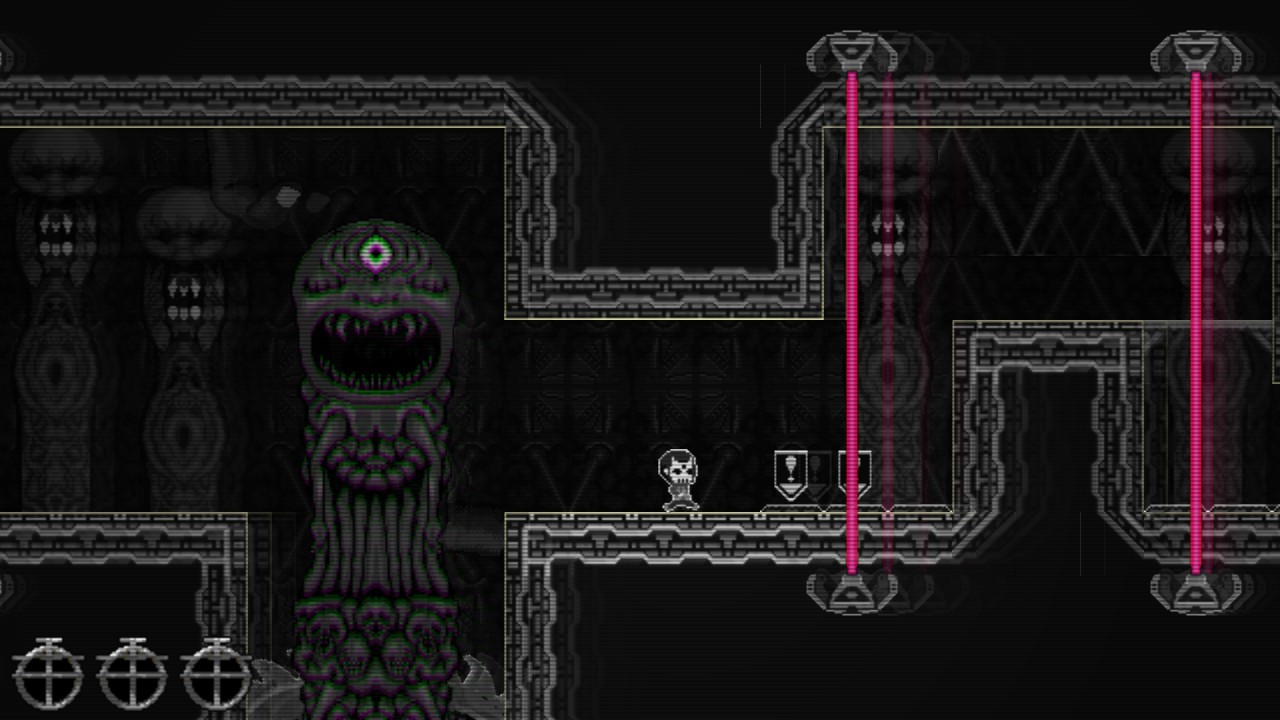 I enjoyed the written element of the game and its delivery of the plot and detailed lore, some parts of the game felt unnecessarily wordy and expositional. The somewhat pretentious info-dumps in this game meant that I often became irritated with how much was being said which could be told through nuance and imagery. This story had amazing promise and to sum up how I feel about these narrative blunders, ’I’m not upset, just disappointed.’ For those players who just want to play this game, the narrative passages aren’t too frequent and do not detract too much from the enjoyable gameplay style. Nonetheless, I have to praise this game for its focus on these themes, especially with the focus on challenging previous beliefs and the beliefs that have been pushed upon you. These are some very deep and thought-provoking themes for such a short, well-designed game.

With a New Game+ style collection of extras, Tamashii has some replay value. Time-trials and high-score systems for each chamber can motivate players to try to beat their time and challenge their skills at playing this title. Also, chambers have a difficult path or an easier path – the difficult path provides more narrative as a reward for its competition. This replay value will have some players come back to experience the game again, maybe in a slightly different way. There are also several rooms that hold some unique experience that subtly tell you more about this universe. This game isn’t very long, however, and I expect most seasoned platform players could finish the game in two or three hours.

It is hard to compare Tamashii to many games as its gameplay style is interesting for the horror genre. It is comparable graphically in quality and how it’s played to games such as Hollow Knight, with similar jump-scare reliant features as the aforementioned Five Nights at Freddy’s and Slender games. But unlike this game, it really explores new themes and I think more developers should take these risks by exploring very different ideas and worlds in video games. If you like the narrative of this game, there seems to be evidence of a sequel on the developer Vikintor’s Twitter account, so keep your eyes peeled if you want more Tamashii.

A short scary game with eclectic design and dark, thought-provoking themes. Will you solve the puzzles of the corrupt temple or get lost in the chambers?