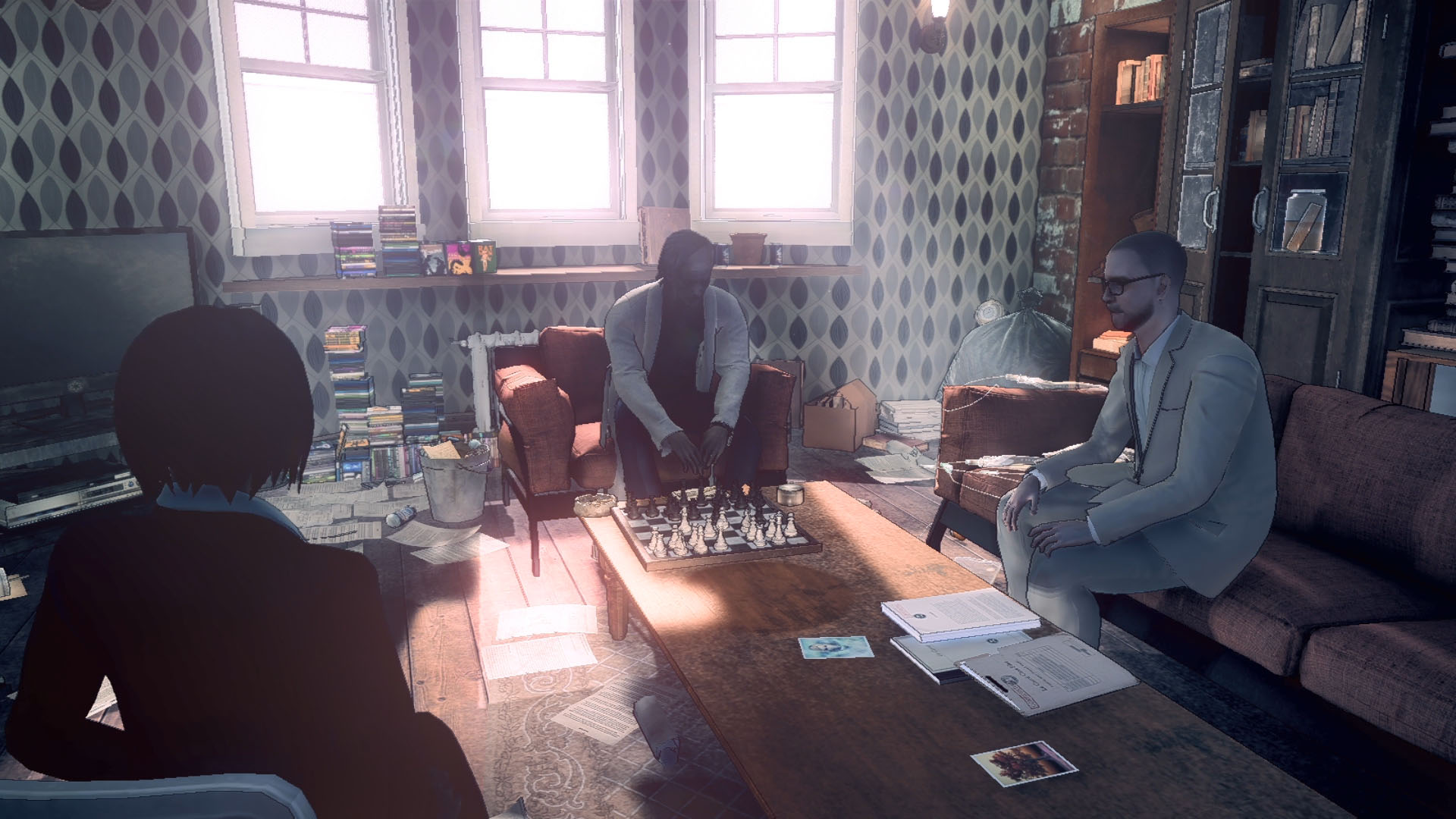 This is a really hard review to write, and not just because it isn’t as positive as I’d like. In general, I tend to favour Japanese games that are more of an offbeat and/or indie nature. I adore seeing all the weird and interesting concepts that come out of the East, and I frequently find plenty that I enjoy about them. But, more than that, I’ve had the pleasure of meeting Swery (formerly Swery65) several times, and he’s genuinely a fascinating person. He delivered a very strong speech some years ago at BitSummit in Kyoto about protecting yourself in the development world and making sure you made the right choices in how to decide publishers, distributors and when to go your own way. I celebrated the creation of his own studio, White Owls Inc, and absolutely gushed over the amazingly bizarre and touching game that was J.J. Macfield. As a result of that speech he gave at BitSummit, I know that he had plenty of frustration trying to regain control of Deadly Premonition, and I was incredibly excited to learn about the sequel (and the pretty decent port to the Nintendo Switch). So, I go forward with a slightly heavy heart as we take a look at Deadly Premonition 2: A Blessing in Disguise, which, sadly, will probably not reach as many people as it should due to the terrible state of the game’s performance.

The setup, to no one’s surprise, is fantastic, and the story is the singular pitch-perfect thing about Deadly Premonition 2. Split across two time frames, players will have a chance to step back into the shoes of York, the protagonist from the original game, as we jump back in time to 2005 and a curious case in which he investigated both a murder and a suspicious drug being spread in La Carre, Louisiana. Additionally, part of the game takes place in present day, where a younger detective named Aaliyah is trying to tie York’s case to her own ongoing investigation, with York being less-than-cooperative as he is older, clearly fighting some kind of illness (which we later learn is cancer), and also battling with inner demons related to that case back in the Bayou. We can go further into the details if you’d like, but it takes away from a lot of the twists that then occur throughout, and they really are spectacular in surprise and utter insanity. You can tell, at the core, that Swery had his finger on the pulse of the storyline, and it continues to beat, sometimes erratically, to the very bitter end.

Deadly Premonition 2: A Blessing in Disguise is a sequel to the original, both in some core mechanics and also in the actual storyline. Like the original, this is an open world game shot through with horror elements, both in terms of grotesque moments and imagery and surrealism that makes the hairs on the back of your neck stand up. York and Aaliyah are both free to explore their surroundings to a certain degree, but don’t think that this is Grand Theft Auto or some other similarly lawless setup. I learned immediately that punching people without provocation leads to losing money, dealing no damage and solving nothing. There are plenty of chances to invest in fighting, but they don’t come arbitrarily, and, instead, are tied into the plot line. While adventuring about, you need to keep certain things in mind about your clothing condition and your food and health: you’re not a machine, and you need to keep your energy and appearance up through good meals, fine threads and the occasional shower. These mechanics flow well into the game, because they are sometimes things you forget about till it becomes a real problem. You don’t want to end up weak and stinky because you’re running yourself ragged, so keep your own parameters in mind. 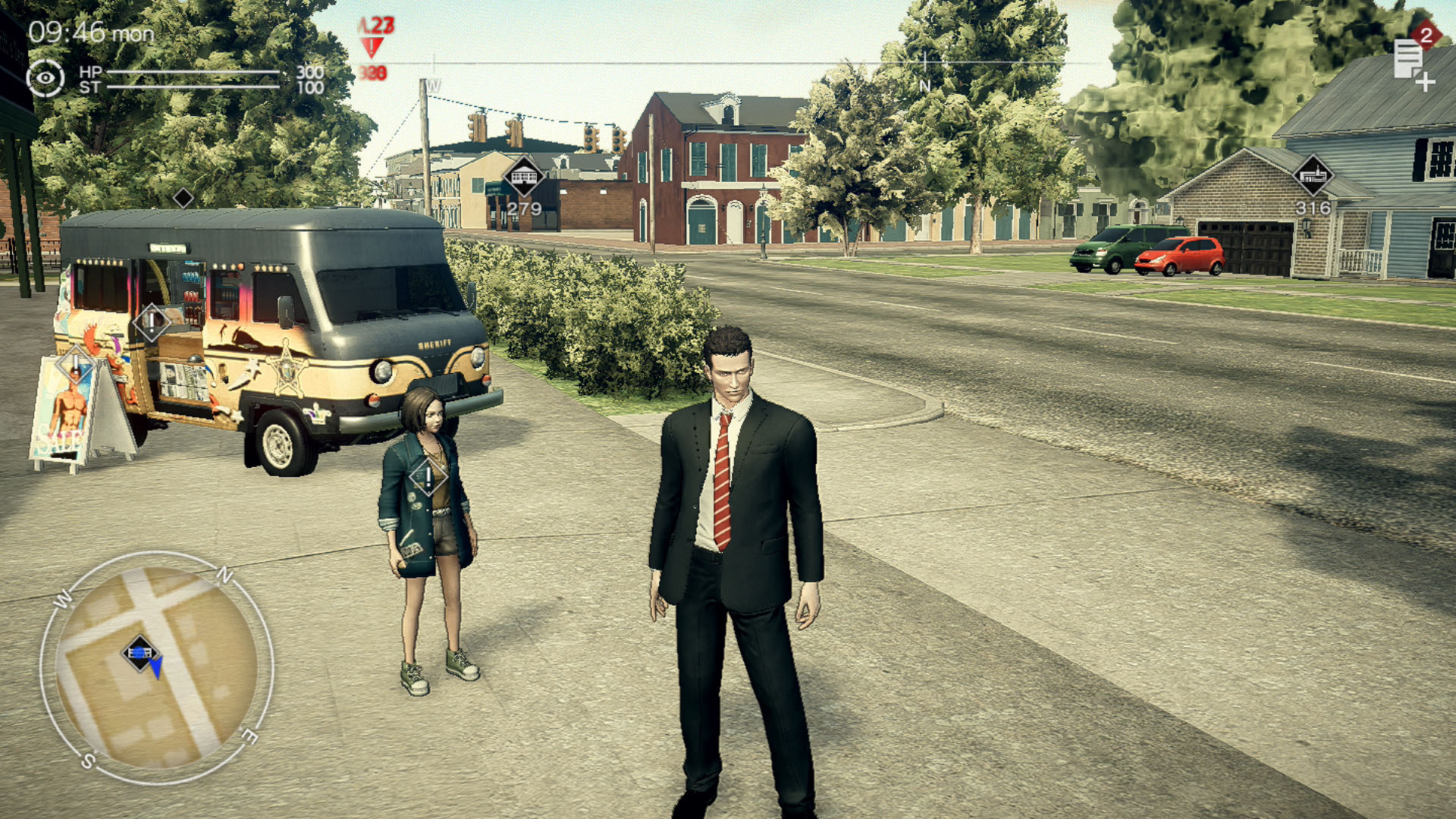 There’s also the matter of organization, an important aspect within the world of Deadly Premonition 2. The way the quest tree branches off and keeps track of everything that you’re investigating is fascinating, and I particularly liked how players had to sometimes create evidence webs that tied ideas and elements together to better visualize the scope of the crimes. It gave York and Zach something to talk about, and any chance that I had to see Zach give his input to York was a worthwhile scene to me. Using the Red Room as a sort of pocket menu for players to check in with themselves and take stock of what was going to fit in perfectly with the atmosphere of Deadly Premonition, so I was glad to see it return in this game with more usage.

The art style has changed terrifically from the previous Deadly Premonition, with the choice to lean into the cell-shaded style that was pretty successful in another Swery game, D4: Dark Dreams Don’t Die. To be honest, when we first go into York’s apartment in Boston, I actually thought we might get a guest appearance from David (the protagonist from D4), because the whole thing felt pretty damn familiar. Instead, we end up with…well, this is where the problems really start. The entirety of Deadly Premonition 2 was boiled down to a very reasonable install size, but there appears to be some draw issue with the whole experience. You often get walls and objects that flicker in and out of existence, losing and gaining detail as you move about, but not really in a flattering or understandable way. It almost feels random. I didn’t mind the way the characters looked in this style, and actually wish that the animation and performance had been better: it would have made me hopeful for a D4 port, and it doesn’t seem totally possible in this state. However, it had smooth and pretty moments: skateboarding along the streets of La Carre at night actually worked incredibly well and looked good, even in handheld. By the way, there is a MARKED difference between handheld and docked, and players, if they have the opportunity, should 100% play docked.

I often get a little jealous of seeing glitches that PS4, XB1 and PC gamers get to experience because they do seem hilarious. When a character’s head almost comes clean off, or horses get stuck in walls or crazy things like that, it almost makes me want to see it myself. Almost. But with Deadly Premonition 2, you don’t get glitches like that. You just have moments of freeze, long loads and massive drops in animation. I can’t count how many times a character simply had their mouth hang open and have words fall out, like a marionette controlled by an amateur puppeteer. Trying to turn a corner on anything leads to the whole game staggering to a halt for a moment as if trying to remember what it put over there. If you dare to skip ahead in a dialogue box, it can lead to a whole lost section of animation, causing the characters to jerk and jump ahead in their movement paths like they just glitched in the Matrix. It was a little funny at first, but it got more and more frustrating, especially as the stakes got higher and I was supposed to take certain things more seriously, even when I couldn’t. 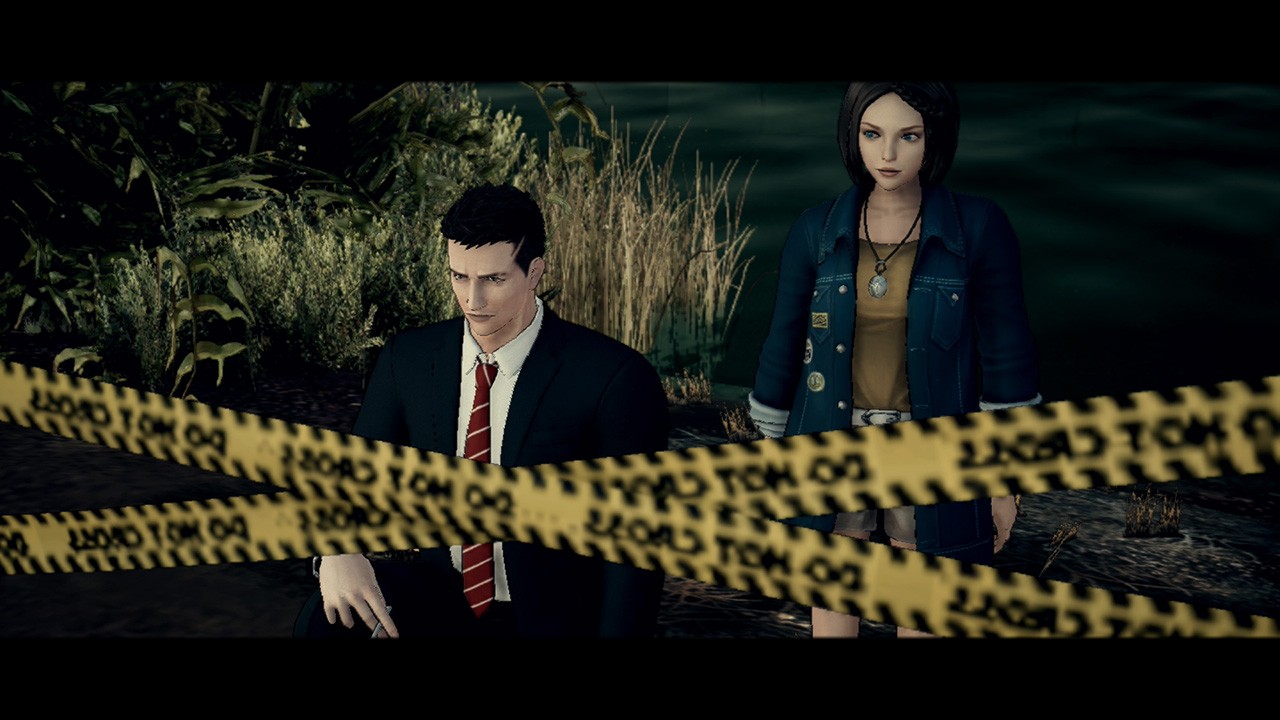 Which, again, is such a shame, because I LOVE so much about this game. Firstly, I see people complaining about the voice acting, and I couldn’t disagree more. There is one thing that I will defend to the death, and that’s the choices that Swery makes for all of his games in regard to voice acting. Deadly Premonition 2 is rich with camp and thick with a certain level of absurdity that makes the voice choices prime. Aaliyah has a strength and shrewdness that go beyond her case file and into her personality. Patricia is certainly full of attitude and sass right up until she has to bang a 180 and take on a VERY different aspect. And hearing York ramble, almost nonstop, about everything and everything is something I could do all day. The comparisons of movies to life, the odd, offhand remarks, how he views life (back in 2005) in an almost aloof, disconnected way….it’s freaking wonderful.

And the world! Deadly Premonition 2 is such a fantastic pack of gumballs and madcaps that it’s impossible not to get enthralled. That’s the hardest part of the whole review: when you’re in it, Deadly Premonition 2 is exactly where you want to be. The musical atmosphere paints this giant picture of something that’s borderline Dada, the absurdity borders on complete mental breakdown, and you can’t help but be totally engrossed in the drugs and murder that lead to a cult that somehow lead to something EVEN STRANGER. The package really walks a razor thin line of being too strange to take seriously and then keeps you fascinated long enough to veer away and prevent you from laughing aloud. In all honesty, it takes far too long for anything that could be considered “horror” to crop up, but it’s got the right level of strange tension that keeps it set, and the entire town of La Carre, like the town of Greenvale before it, keeps the fog of Twin Peaks floating about it at all times (though to different degrees).

Yet, at the end of the day, Deadly Premonition 2: A Blessing in Disguise is simply too rough and vulgar for most players to get into and invest their time. If you were a diehard fan of the original (either the classic or the Origins port), and are understanding of how Swery has evolved his works, then you’ll find joy amidst the frustration in handling and speed. Clocking in at around 15 hours or so, you’ll be left wondering if you could have cleared it in 10 with better optimization. And if you’re just starting with this game based on recommendations of the first…well, I think the picture you’ll see won’t be as sweet as you’d like. Isn’t that so, Zach?

What should have been a celebrated sequel is, instead, a painfully optimized game that only determined fans will be able to enjoy.