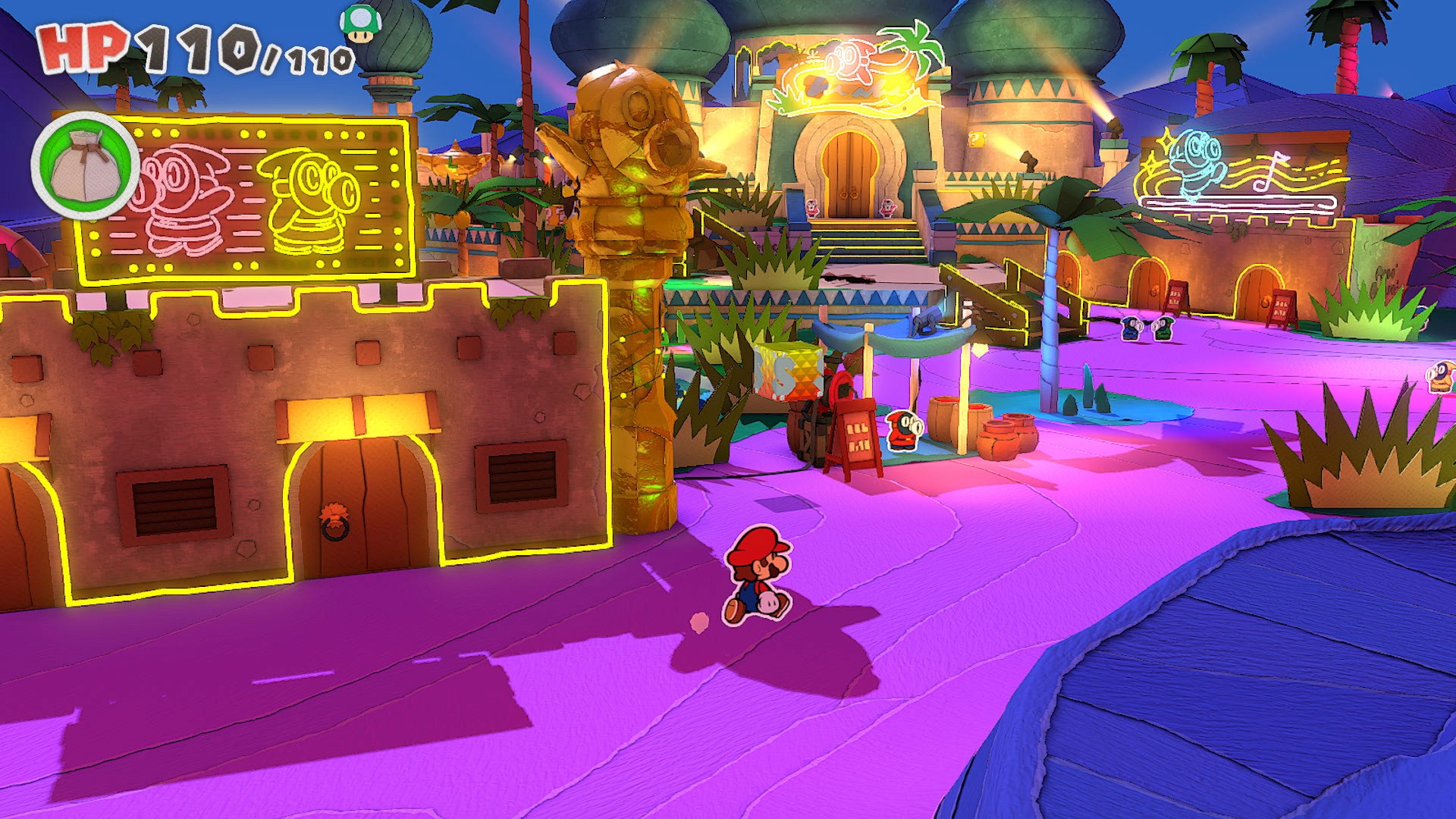 The Paper Mario franchise has had a turbulent time in recent years. The last two games in the series, “Sticker Star” and “Colour Splash” both were widely rejected as poor by fans. The biggest issue that many fans have is the series hit its peak with 2004’s “The Thousand Year Door” and has struggled to reach the same level of praise ever since. Even trying to collaborate with Alphadream’s “Mario and Luigi” series failed to rekindle a love with hardcore fan bases.

With 2020s release schedule being marred with delays in both announcements and actual releases, many rumours surfaced of a Paper Mario game, many suggested this would be a remake of “The Thousand Year Door” but in fact, Nintendo dropped an entirely new title on us, and the trailer gave a lot of fans hope.

The Origami King starts us off simply enough with Mario and Luigi arriving for the origami festival (with no mention of cake!). Upon arrival, they find a deserted town and castle area. Eventually Mario enters the castle and is confronted by Peach, but something is not quite right. She looks… off. Mario is then imprisoned in a failed attempt to convert him to what can only be described as the “cult” of the self-proclaimed origami king, Olly. It is while imprisoned that Mario meets Olly’s sister, Olivia and together they seek to rescue princess peach from her folded origami form and remove the streamers wrapped around the now imprisoned castle.

Far from previous games, where the worlds were numbered and completed in some form of sequence, the worlds are presented almost in their entirety, with an almost seamless progression within each world’s areas. As you progress through the world you will gain coins, which can be used to purchase items and upgrades, but also have a role to play in combat which we will cover later. Coins are handed out like sweets, being given out when you find toads, defeat enemies or break structures such as question blocks, but the cost of items ensures that a good balance between the two is reached so that you never have too many and can easily gain a few more for that just out of reach item.

The other main feature is the confetti bag, as you probably guessed by now, the world is made of paper, and by damaging the world with your hammer you produce confetti pieces. These can be used to repair parts of the world that are damaged. Often it’ll just release coins, but it is also used as a mechanism to help the progression of a stage by repairing, say, a staircase that you can then travel to the next stage. 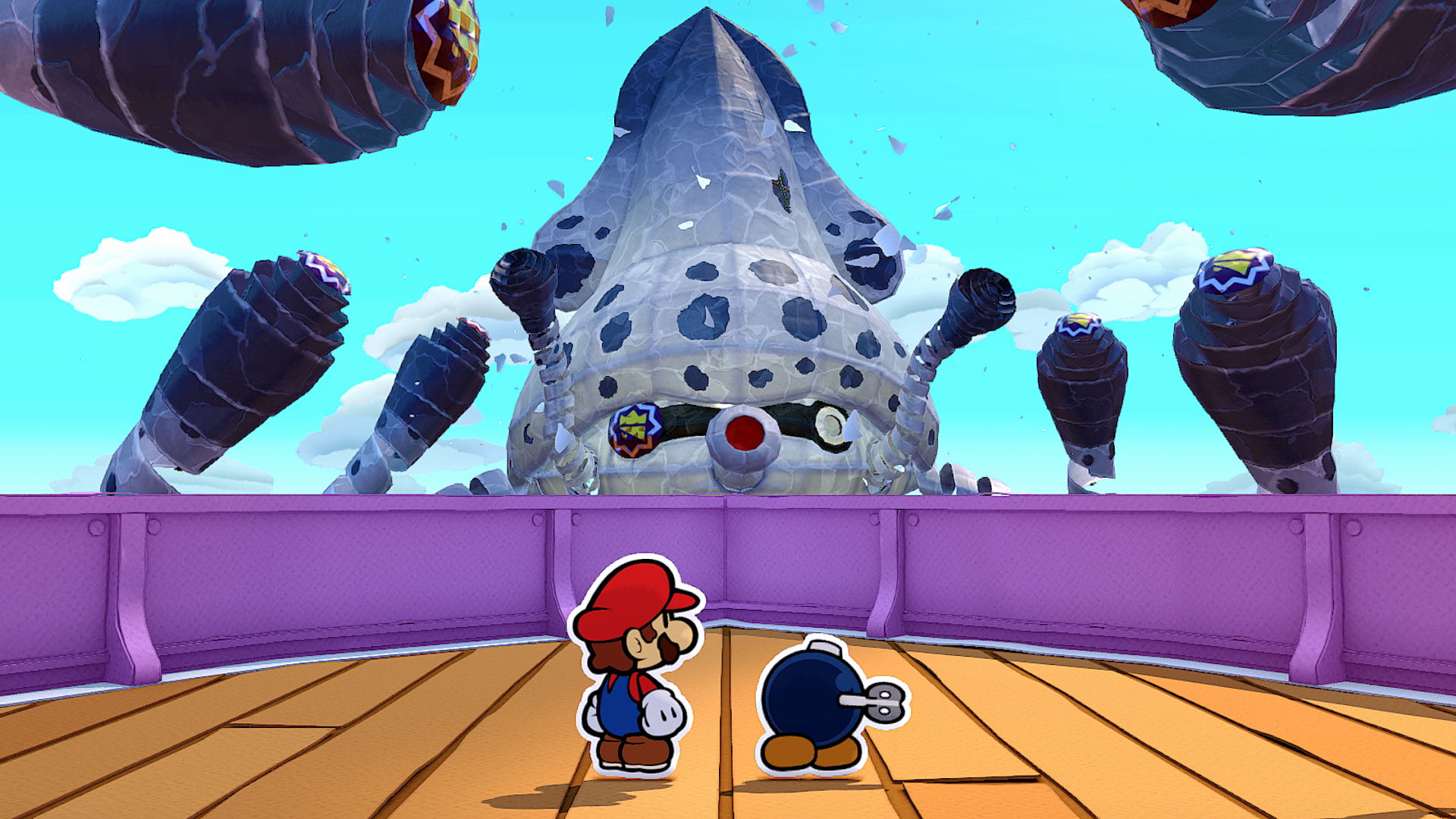 The battle mechanics are where Origami King distances itself from previous games and is both a blessing and a curse at times. Enemies will arrange themselves on a sliding disc puzzle around Mario, with the goal being to use a set number of moves to align the enemies up. Arranging the enemies in certain ways will make certain weapons more effective, and getting a perfect arrangement will increase the amount of damage that Mario can do. This is on top of the familiar Mario RPG action mechanics, where timed actions earn greater damage, or a blocking effect against enemies.

The variations of enemies are also present from the get go, though the enemies are drawn from the huge pool of Nintendo enemies, albeit their origami counterparts, there are also larger, papier mâché creations of popular Mario enemies that have to have weaknesses exploited before you can demolish them. Bosses take the form of more realistic art and craft supplies and their design is quite creative, despite repurposing an idea from earlier titles. The boss fighting mechanic takes a slight change here, creating a path to your attack using the sliding tile puzzle as opposed to lining up enemies.

Overall, the combat system is a welcome change to other turn based combat as it doesn’t create any downtime between attacks, you are always either ensuring you can land your next move effectively, or you are trying to reduce the damage from an attack. The puzzle element provided by the sliding tiles is both a refreshing change, but also an incredible frustration I found. Including a timer to complete puzzles in often left me with incomplete portions and a frustration of not completing the puzzle. There are options to get hints, which kind of acts as a pause function, and there is the ability to use coins to extend your time, but you will want to use this sparingly. You also can pay for any toads you rescue in the game to cheer you on, providing in combat support in a variety of ways. There are options to reduce the impact of the timer later on in the game, but these come with their own costs as opposed to having a facility to remove them completely.

The RPG elements as a whole are on the “lite” side, as is common with more recent Paper Mario games, but one reintroduction of sorts is the companion mechanic, during the course of the game you will encounter characters who will follow Mario around and provide some comic relief, as well as interaction for Olivia, whom otherwise is quite a lonely character alongside our silent protagonist. These companions often help in combat also, “mopping up” enemies you weren’t quite able to or simply making it easier to finish off a battle. However, these are a far cry from the companions of old, and their character developments are on the shallow side at best, it is clear this is an attempt to pay lip service to the devoted fan base who have been asking for a return to the party-based strategies they had enjoyed previously.

The controls are simple and easy to understand, moving with the analogue stick and making selections with the action button. There are also buttons to trigger hints from Olivia, and the triggers release a stream of confetti for tackling the issues mentioned earlier. There is also the option to use your hammer to beat away weaker enemies without the need to enter combat as Mario’s strength increases. The game supports motion controls, and these are seen early on with the 1,000 fold arms being controlled. Though I confess a dislike of motion controls, I felt this a needless use of a gimmick and it certainly felt out of place using a pro controller, needless to say it was quickly removed in the settings, the game however does not point this out to you until much later. 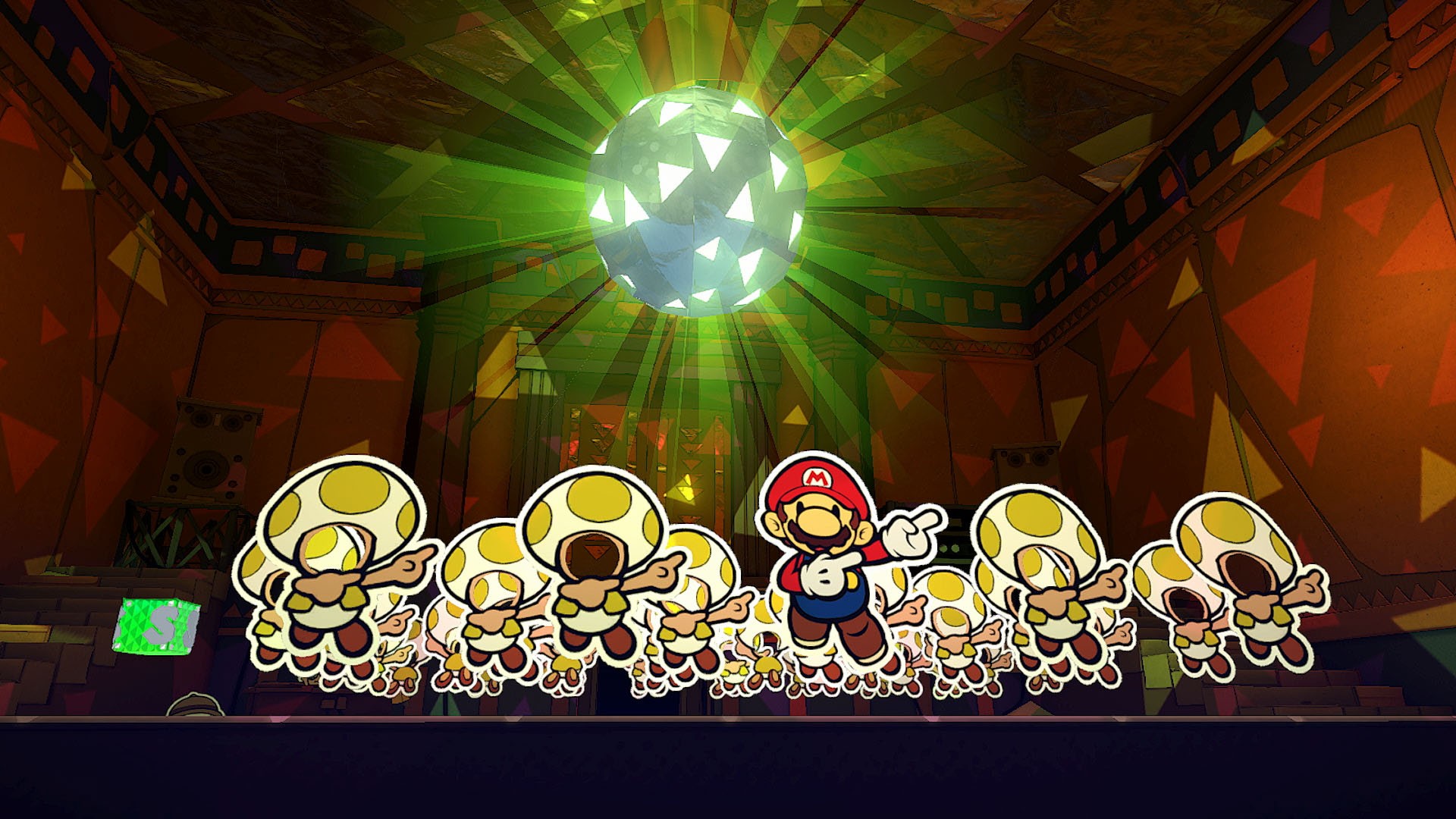 Graphically the game looks great either in handheld or in docked mode, but considering the cartoonish aesthetic you would be quick to think that this should be the case. But there is incredible depth to the level design and a wide use of colour, with clear sharp edges to the 2D characters and a clear 3D looking effect for the origami characters, there has been a lot of work done behind the scenes to ensure that, graphically, this is putting Mario’s best foot forward despite the aesthetic using little in the way of new ideas. There are some slight frame rate drops if you decide to repeatedly smash your hammer against a tree to cause a tidal wave of confetti, but apart from that I found no graphical issues and didn’t notice a huge drop in the presentation when switching to handheld mode.

The game’s soundtrack accompanies the levels well. Titles include a huge variety of genres, styles and instruments with nods to previous games in Mario’s massive back catalogue and remixes of popular classical tracks that clearly are in the public domain and rife for reworking. That said, the soundtrack has this ability to blend into the surroundings to the point you don’t notice it (often a sign of good background music) but also recognise that one small sequence that brings the soundtrack back to the forefront long enough for you to appreciate its reference. At no point did I feel removed from the game because of the music, and it certainly helped to keep me motivated when I could not complete a frustrating puzzle. As soundtracks go, this is one you would want to have a copy of.

And so, dear reader, we come to the final portion of this review, where many people will still look for the answer to one question, “Is this as good as “the thousand year door”?” There are far too many factors to consider in answering that, so I won’t attempt to. However, as someone who has grown up loving the Paper Mario games, and their “Mario & Luigi” counterparts, I have to point out that “Origami King” is better than “Sticker Star” and “Colour Splash” and is closer to “Super” in its gameplay design, and that’s not bad! I really enjoyed the charming and immersive landscapes I found myself in, I loved hitting things with my hammer only to find they were a folded up toad and I especially enjoyed the chance to play something that felt both challenging but enjoyable.

Taken on its merits alone, “Origami King” is a fun and enjoyable game, with a few minor flaws that prevent it from being a console defining title. For most gamers, there is plenty to enjoy and the constant stream of references and humour to give you hours of fun. But for the hardcore RPG / Mario RPG fan harking back to 2004, you will probably still be waiting for something that is likely to be beyond reach.

Overall, The Origami King is a great improvement on previous games in the series that most fans would rather be kept in the vault of obscurity.