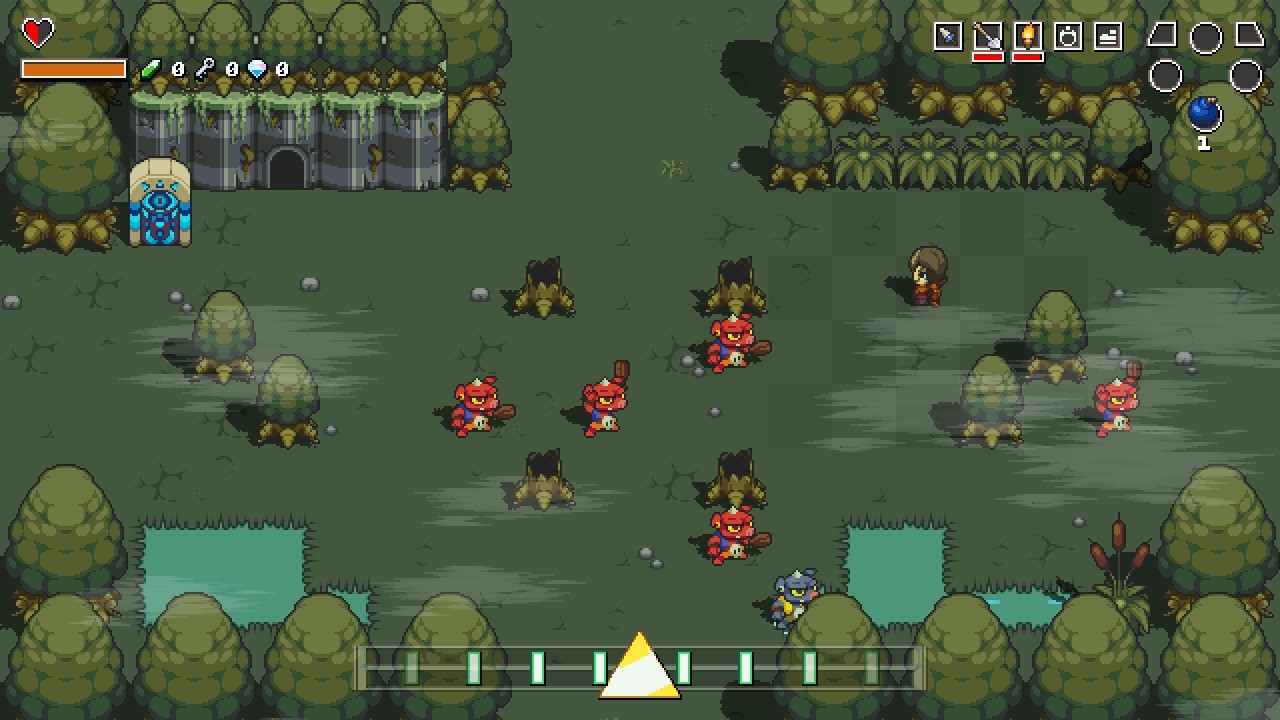 Cadence of Hyrule is a continuation of the surprise and delight model that Nintendo has adapted with the Nintendo Switch. It all started, obviously, with the Mario Vs. Rabbids title, a turn-based strategy game that is far, far better than anyone could and would expect. Then we had Toby Fox from Undertale making levels for Super Smash Bros. Then any number of other bizarre collaborations that no one could have seen coming, including this amazing musical gem. Combining Crypt of the Necrodancer with The Legend of Zelda was so impossibly insane, and it just worked so, so well. Take classic music, remix it in a format that took so many cues from Crytodancer, follow the classic rhythm dungeon crawling format while intermingling the monsters, landscapes and characters of Hyrule…it’s brilliant. So much so that the game continues to be on Nintendo’s front page (despite Brace Yourself Games being the main creator) and, now, DLC is coming. Players can purchase a season pass now that will incorporate three different DLC packs, with one being available immediately and two more on the way. The first pack, The Character Pack, is here, and, if it’s any indication of what’s coming, players should jump on the season pass immediately.

The main draw of this DLC is the addition of five new characters, who are Impa, Frederick (the shopkeeper), Aria (from the original Necrodancer), and the shadow forms of Zelda and Link. Each of these characters can be used in the new Single Character mode, which is, essentially, a lighter story mode that focuses only on these characters, as well as using them in the Dungeon Mode and the “All Characters Mode.” All Characters Mode is a pain in the ass mode where you play through the dungeons as each character, in turn, and you can’t go back and use another character, nor can you really do much if you manage to get all the way through. It’s like a sampler version of the game that challenges you to be able to do the whole thing with every single character (minus the story overworld and more focus on the dungeons). Dungeons Mode is just that: removal of the overworld entirely and just dungeon after dungeon, much more akin to the original Necrodancer. Also, there is a Mystery Mode, which makes everything you can and will pick up a mystery until it’s in your hands, and all enemies mysteries until they murder you. It’s as close as you can get playing blindfolded without removing sight of the procedurally generated world entirely. Keep in mind that Mystery Mode exists even if you didn’t purchase the DLC, so feel free to boot up your vanilla copy of Cadence of Hyrule and prepare to absolutely beat your head against the wall.

Now that we’ve got that out of the way, let’s go ahead and take a quick look at the characters in order of interest. The first two are the dual entities of Shadow Zelda and Shadow Link. These characters are, for all intents and purposes, just skin swaps of the original characters. Their abilities are basically the same with some very, very minor differences. With Shadow Link’s Shadow Spin Attack, it has a bit of a vacuum effect when charging: it actively draws enemies closer as you get ready to unleash it, potentially maximizing effectiveness. Similarly, Shadow Zelda’s Shadow Nayru’s Love can reflect back projectiles on both active beats, but this, again, is so minor compared to the original Nayru’s Love that most players won’t even be able to tell the difference. It’s sort of fun having these two as options, but some quick playing with them reveals there is very little reason to differentiate them from their originals, and sort of has me scratching my head as to why they’re part of this DLC. I suppose we needed to fluff out the pack entirely, but I rarely cared for them, even if they do look cool. 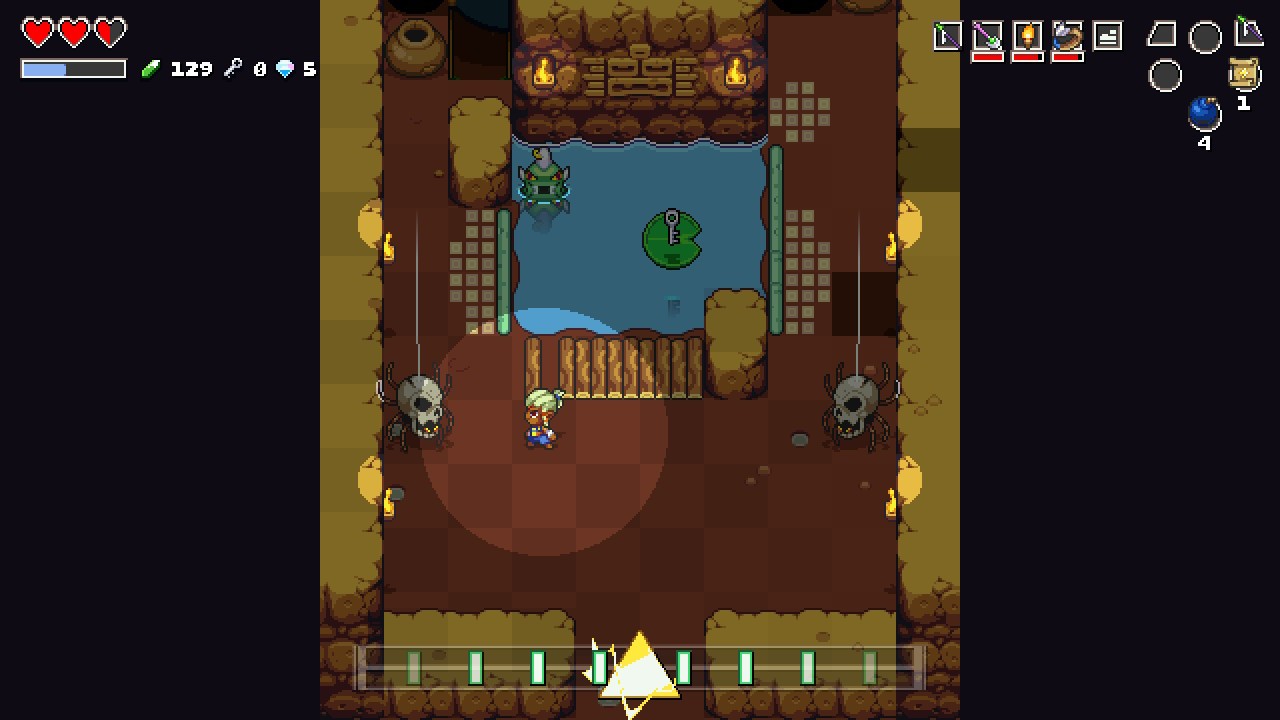 Aria. Oh lord, how I hate Aria. A glass cannon is at least supposed to do damage before it explodes, but the number of times that Aria just shatters because I was off by a half second is astounding. For those unaware, Aria is a character from the original Necrodancer, the ghostly grandmother of the protagonist, Cadence, and is playable there as well. Aria’s whole power is that she has exactly half a heart, can’t pick up any additional hearts, can’t pick up any additional weapons, and dies faster than shaved ice in August heat. The entire reason to play as Aria and succeed is bragging rights, and they would just make me stare in disbelief at the amount of time and patience you’d have to have to make Aria succeed in, well, anything. The nice part is that, with Cadence of Hyrule, you can turn on the Fixed-Beat Mode, removing the need to keep up with the tempo in order to survive. I think that this little toggle is the most important thing in the game for Aria, and yes, it’s a cheap way to survive, but goddammit it’s what I need to do. Aria is only for veterans who like to punish themselves, so proceed with caution.

Now, it’s clear that a ton of work went into the next two characters. Frederick, the shopkeeper, is a hilarious powerhouse who has a real presence as a playable character. Whereas before he would only engage you if you were dumb enough to attack him in the store, this time Frederick is off on his own mission to amass a fortune and be a big name across all the dimensions. His two abilities, Vocal Blast and Rupee Toss, are very effective, with the Blast both stunning enemies and deflecting projectiles while the Rupee toss is a decent ranged weapon at the price of 5 rupees a go. However, Frederick also comes with some caveats that you need to keep an eye on. He loses money as the battle rages on, dropping approximately one rupee into the void for every eight beats, regardless of what you’re doing. Frederick also needs to keep that cash up because he will die. That’s the truth: Freddy can fall victim to damage or simply being too poor. If he dies, he turns into the Phantom of the Shopera, which is the most delightful pun, and now he’s got half a heart (just like Aria!) but can turn back to normal if he gets more hearts or money (definitely not like Aria!).

Frederick is a fantastic character to play as for new and old alike. Besides being the second most iconic thing about Necrodancer, he fits perfectly into the world of Cadence of Hyrule. He moves about and exercises his skills well, his drive to getting rupees is more compelling than Link or even Cadence herself, and he can actually sell stuff, in his own shops, when he discovers them. There’s nothing in this world more delightful than putting a scroll you won’t use into a shop, seeing a little Frederick puppet appear and start singing, and then getting money, sometime later, from a supposed hero who bought the goods. Everything about it is fun, and he has the strength and stamina to last through a playthrough. 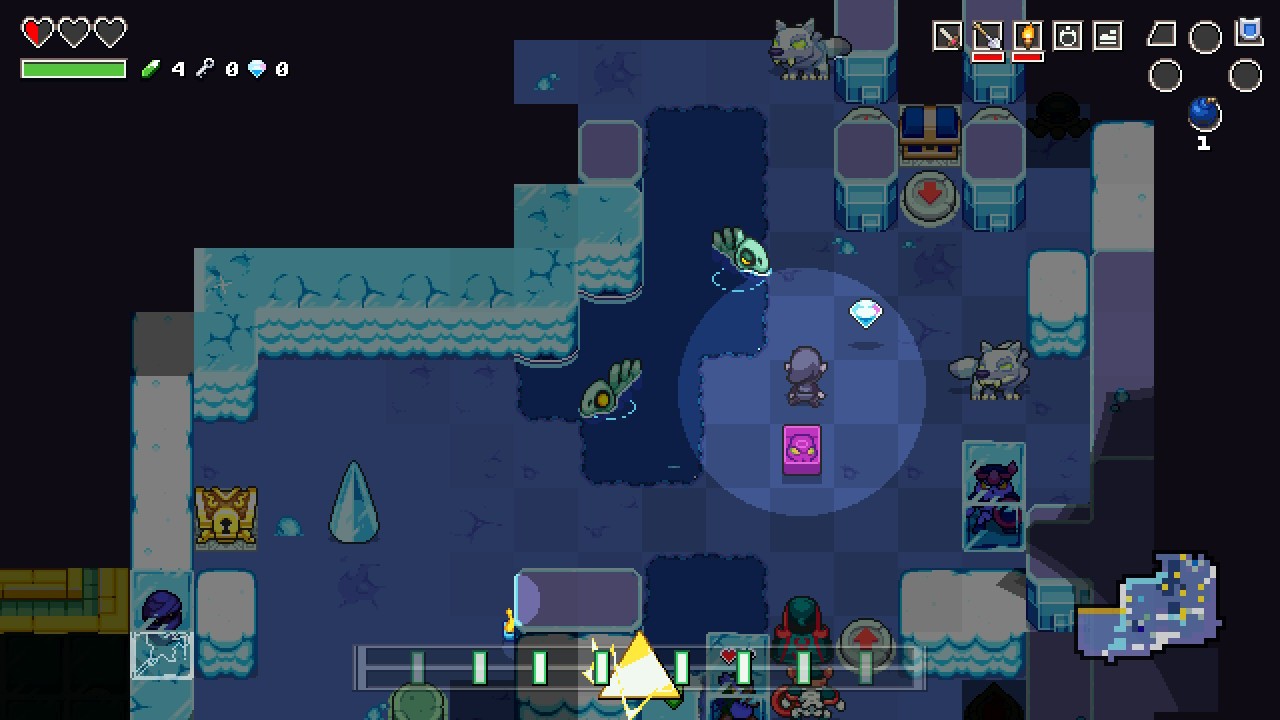 Lastly, most importantly, Impa. Impa has been around in the Zelda games forever, but has only taken on the lithe and commanding form most people recognize as of the Ocarina of Time. She had some playability in Hyrule Warriors, and it’s a shame more people didn’t play that game, because it’s a stellar musou in every sense of the word. Within Cadence of Hyrule, Impa, flat out, kicks ass. Impa always has a spear, not a dagger which is an inherent advantage from the drop. With her spear, Impa can deflect projectiles, which alone is a plus, but also to do a three tile ahead strike, giving her a massive advantage over a majority of the mobs who can’t even engage her if not. Impa also (believe it or not) has the ability to get the hell out of the way passively. If she’s at full stamina and she’s attacked in a standard direction and has an escape visible, she will automatically disappear, leaving an effigy behind and suffering no damage. The requirement of having full stamina means that it’s not a never ending trick to stay alive, but it’s a useful one that helps immensely in later stages.

Impa will be the biggest pull of this pack. Mark my words. She creates some fantastic combinations due to naturally having a greater reach, has a stronger constitution than most, and flows naturally into the game world. Now that I have access to Impa, the only reason to play as other characters is either to challenge myself OR to take a break so I can better appreciate her within the world. If you activate Fixed-Beat Mode, this just becomes a grid-based game about Impa destroying everything that might harm Princess Zelda, which is her fantasy and mine. Yes, she can be a bit too strong, but what the hell is the purpose of having a character who isn’t awesome? She doesn’t make the game boring: rather, I loved feeling totally in control of the world at large. I wanted to challenge Ganon from the beginning, but I still needed to play through in the proper manner.

When it comes down to it, the Cadence of Hyrule DLC will be decisive for people who are on the fence. Getting just DLC pack #1 by itself isn’t a terrible cost, but everything in me says that the season pass is where it’s at. Two of the five characters are exceptional, two are decent, but really just palette changes and one is Aria, and I loathe Aria. Six bucks for some new game modes and new choices aren’t bad, but the fifteen for the promises of the future as well just feels like a better investment. Players who are waiting for the physical release with the DLC baked in are welcome to do so, because that’s their prerogative, but current owners should get on this season pass while the getting is good. Now, if you’ll excuse me, Impa and I are off to beat some ass.

It’s time to dance back into Hyrule with five new characters to help set the rhythm and destroy evil in the most musical ways possible.