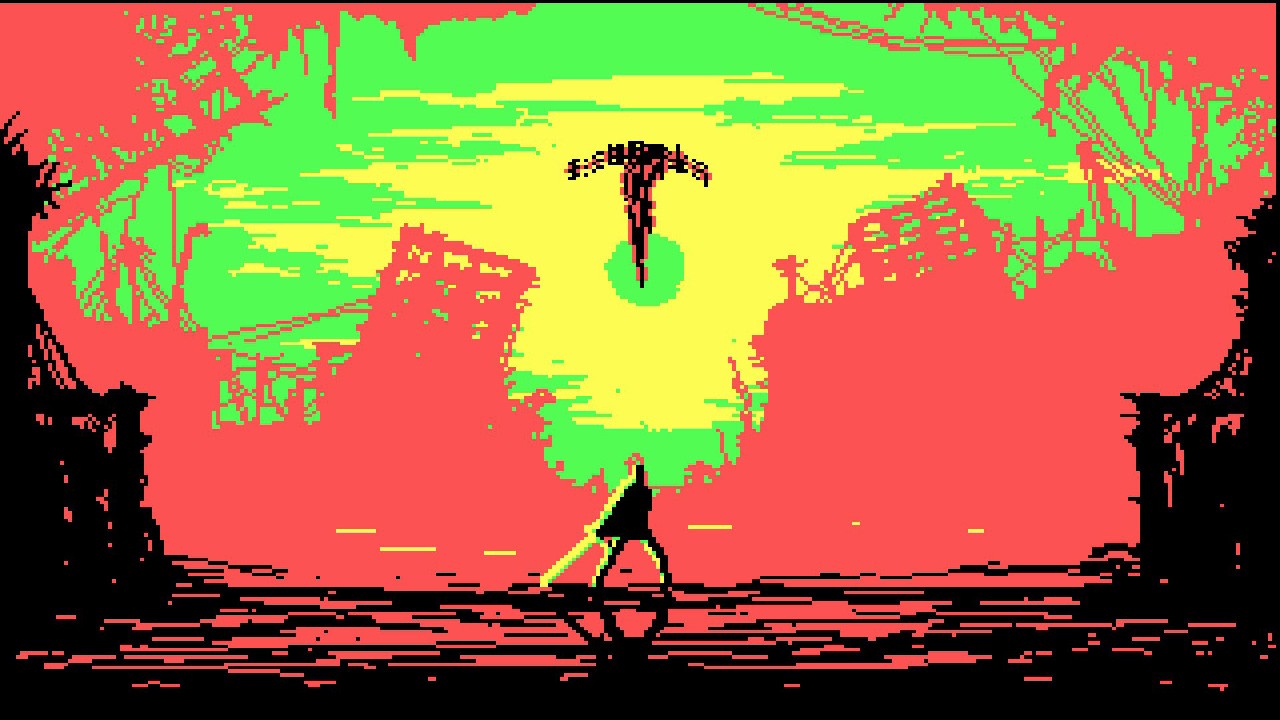 There is this period of time where games from a certain era feel like specific pieces of art. For anyone who’s had the liberty of playing Prince of Persia, Another World, Flashback and the like. They’re these wonderfully angular titles that have a story and a gravity behind them that comes from the development of ideas and dreams that were, at the time, beyond the capabilities of technology to express. For some people, a remaster is the clear choice: take those fantastic notions and repurpose them in higher resolution, with more control and pixels. For others, it’s important to preserve the heritage of it all and leave the game unchanged. These notions are why games like The Way and The Fall exist: they recognize the craftsmanship that went into creating surreal, memorable adventures back when ambition was limited by silicon reach.

For the people behind The Eternal Castle Remastered, it should be noted that the lore behind the birth of this experience is almost as important as the game itself. Determined to create an online tall tale, the creators (Leonard Menchiari, Daniele Vicinanzo, and Giulio Perrone) have gone way out of their way to create the notion that this is a remastered version of a game from 1987. There is a level of Blair Witch-style methodology, invoking so many small, purposeful breadcrumbs to lead you to a conclusion that this was a game that we all somehow missed, but definitely existed. I don’t want to spoil the illusion completely, mostly because I was quite young in 1987 and certainly can’t account for every single video game that had ever existed to that point. What I will say is that I tend to be quite resourceful in digging through old video game information before writing anything, and my conclusion is that I couldn’t find a damn thing about the original Eternal Castle anywhere. While this doesn’t completely void its reality in the 80s, it certainly makes me circumspect about the authenticity, and I have no basis to say one way or the other. Thankfully, there’s enough of a grand adventure in the core that has nothing to do with the lifespan of this title, and TFL Studios still did a good thing by bringing it to the Switch.

The plot for The Eternal Castle Remastered is purposely convoluted and obtuse to discern, both in the game’s context itself and in the presentation (again, remastered games from the 80s). What I can figure out is that we’re in a post-apocalyptic future in which the good parts of humanity have fled Earth because it’s a nuclear hellhole, and people mostly live in self-sustaining “Ecospheres” that satellite around Earth. Every so often, Scavenger units need to be sent down to Earth to collect various materials to help the Ecospheres continue to function, but one Scavenger unit is late. Far too late. You, the protagonist, have decided to go down to the surface to rescue the unit, because, in your own words, “Either I go or she dies.” It’s perfect, it’s got that vibe of old 60s/70s sci-fi to it, complete with the whole toxic world unfolding and creating a much grander adventure, requiring you to explore four surprisingly huge areas, including the titular Eternal Castle. 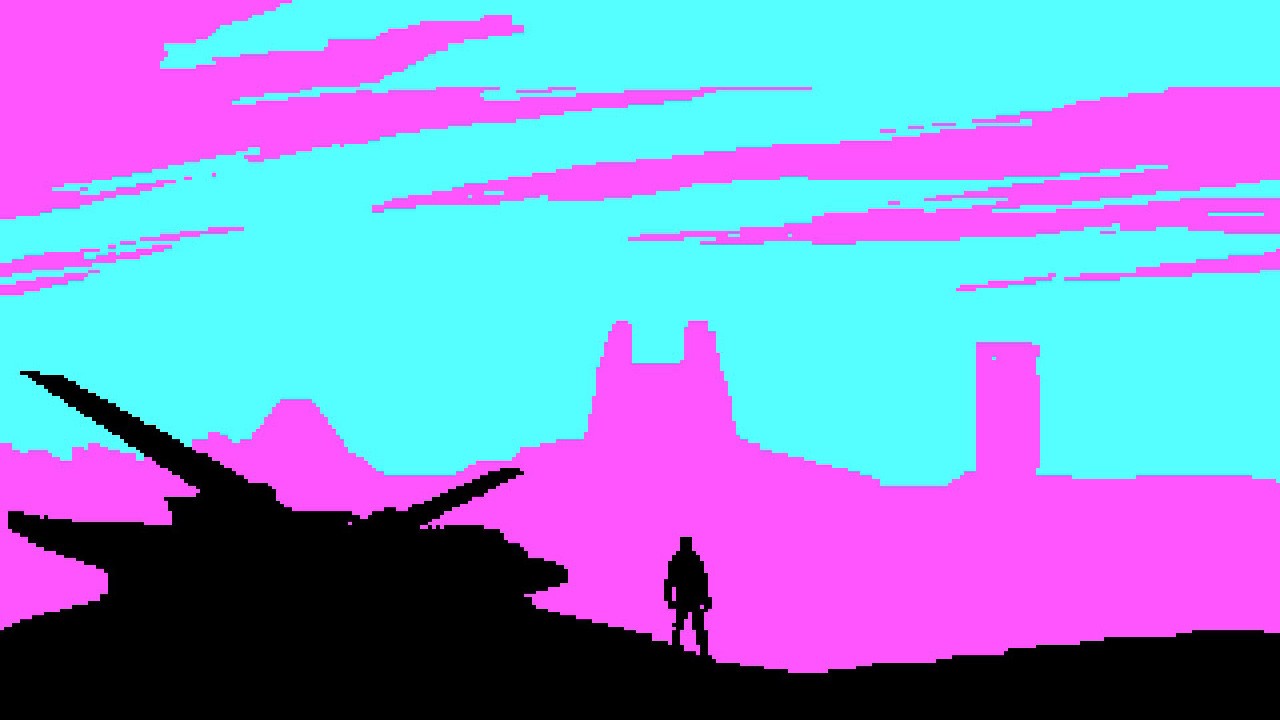 First and foremost, this game is trippy as hell to try to play and even focus upon. The Eternal Castle Remastered is done up in a very stark, perspective-based style that uses a self-purported 2-bit system for colours and tones. This is one of the earliest indications that the game is an homage to something classic and not truly classic. Whereas older games certainly used a style that mimics aspects of The Eternal Castle’s motif, it was something born out of necessity. The Eternal Castle is far too clever in design, actually using negative space to craft additional features and details, and also to give the game a chance to sneak up on you. Having objects live not just in the shadows, but in the absence of colour makes for amazing stealth moments, where enemies can attack you as you reflect upon the Eternal Castle in the distance, or you can get lost watching a truly spectacular sequence unfold on a found computer. The uses of purples, teals, blacks and whites make an overall picture that I feel gives a very punk rock element to the synth wavelengths that the game (and the soundtrack provide). When you emerge into a rave scene deep within the broken halls of the Ancient Ruins, it’s almost an overwhelming amount of stimulus, not least of all because there’s about thirteen potential enemies in there, and it’s easy to mix up your avatar amongst the mass of non-space bodies that occupy the dance floor.

As for the game itself, The Eternal Castle Remastered asks a lot from the player. You need to run, jump, crouch and wait through a very long, very spaced out landscape. There are so many things to find and collect, the most important being “fragments” which are needed “to get home.” There are different weapons that you need a very critical eye to be able to tell the difference between when they’re not in your hand, and your ammunition is limited and impossible to find. If your gun runs out, be prepared to face your consequences with fists and hope that you can get the drop on someone else with a firearm before they recognize you’re there. The combat for the Eternal Castle can be absolutely brutal at times, with you being shot at, punched, swung at with various weapons and generally getting ganged up upon. Very early on, you end up in a gladiatorial fight to the death before a screaming crowd, and it’s actually a very close duel in order to survive and move forward. This game is not screwing around in terms of density and difficulty.

And that’s just the combat aspect. A whole hell of a lot of The Eternal Castle is exploration and careful problem solving, complete with instant game over traps peppering the landscape. I got cut in half, fell to my death, shot in the face, smashed by some kind of mutated giant boss (oh yea, we got boss fights!) and good old fashioned “beaten to a pulp,” which is what happens when you decide to treat life like the escape scene in Raiders of the Lost Ark and just keep trying to run past enemies instead of fighting each and every one of them. The intelligence of the AI here once again belies the true nature of the beast: NPCs will chase you between rooms and even up and down certain structures if they see a clear path, and they really can be relentless if you’re not careful. Meanwhile, I’m trying to find fragments that are super important, upgrade my ship so I can get the hell out of here and on to the next area, and cope with the positively bumping synth soundtrack that makes me feel like I’m stuck on a dead planet in a distant era. 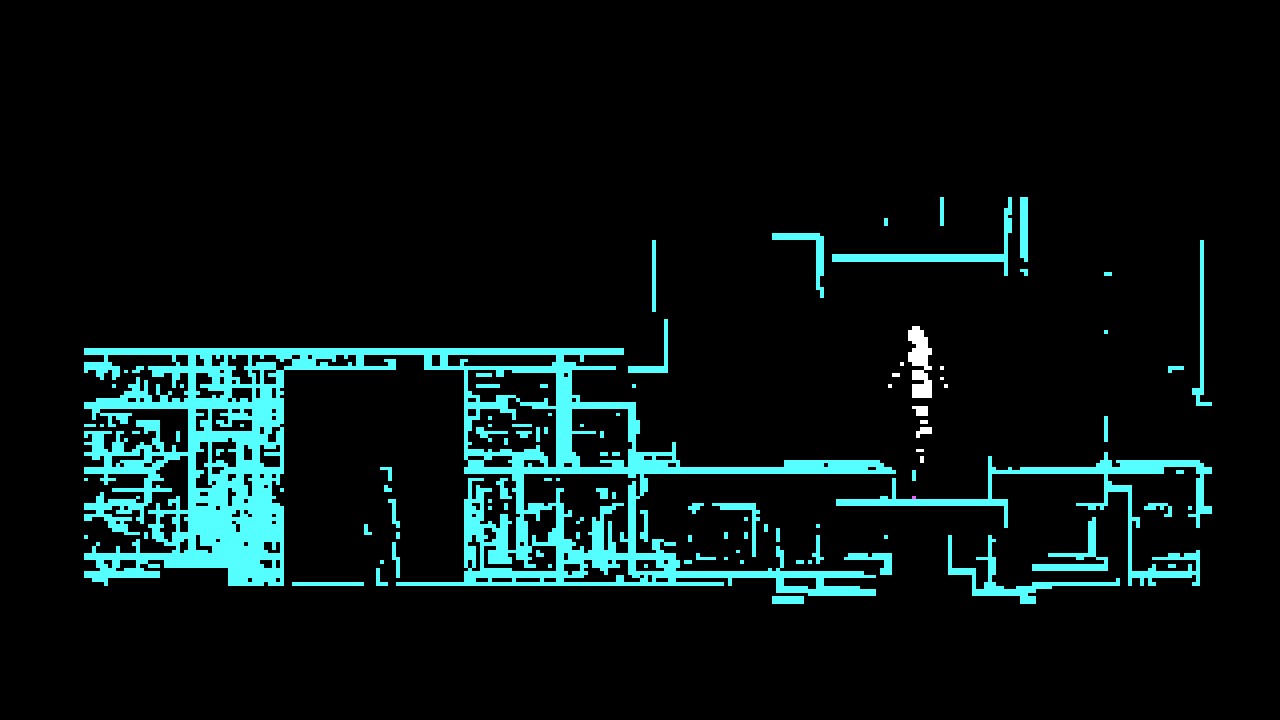 What’s truly remarkable about The Eternal Castle Remastered are the tiny nods and facets that help elevate this game from ordinary to extraordinary. The controls are as tight as the developers want them to be, but there’s a bit of extra flutter and jankiness to the running and jumping that would be natural for a game that was originally crafted for the Amiga or maybe Apple IIe. As much as we try to hide the full form and body of it all, there’s these extra moments of animation that pulls back the curtain, showing some dramatic explosions from gunfire or from otherworldly chaos that catches you off guard without taking you out of the moment. You die and respawn from a meditation point, which you took time out of running for your life to drop and sit in a lotus position in front of. You’re never exactly sure what the hell is happening, but your base instincts tell you to run, to fight, to live and to keep searching. You’re fed kernels of fact for the game, but it never fills you up wholly, and you have to rely on your own drive to keep it going. It hits all the right notes for the type of game they’re capturing of this era, and it fits in so well that I almost believe in the mythology of it. Almost.

When all is said and done, The Eternal Castle Remastered is more than a game: it’s a carefully constructed piece of art, a performance piece that sits comfortably between engaging the player with execution and with tantalizing them with the presentation. It’s remarkable in the design, it’s sometimes frustrating in how it handles (and also the strange, dead load times), and it’s 100% memorable. For players who used to game in a time before Nintendo reigned supreme, this is a callback that’s somehow brand new. It’s completely worth your time and money, and players who are determined will uncover secrets, a New Game + mode and all you could ever wonder about The Eternal Castle.

An unbelievable adventure soaked in lore and atmosphere, you’ll almost believe in the myth of The Eternal Castle yourself.