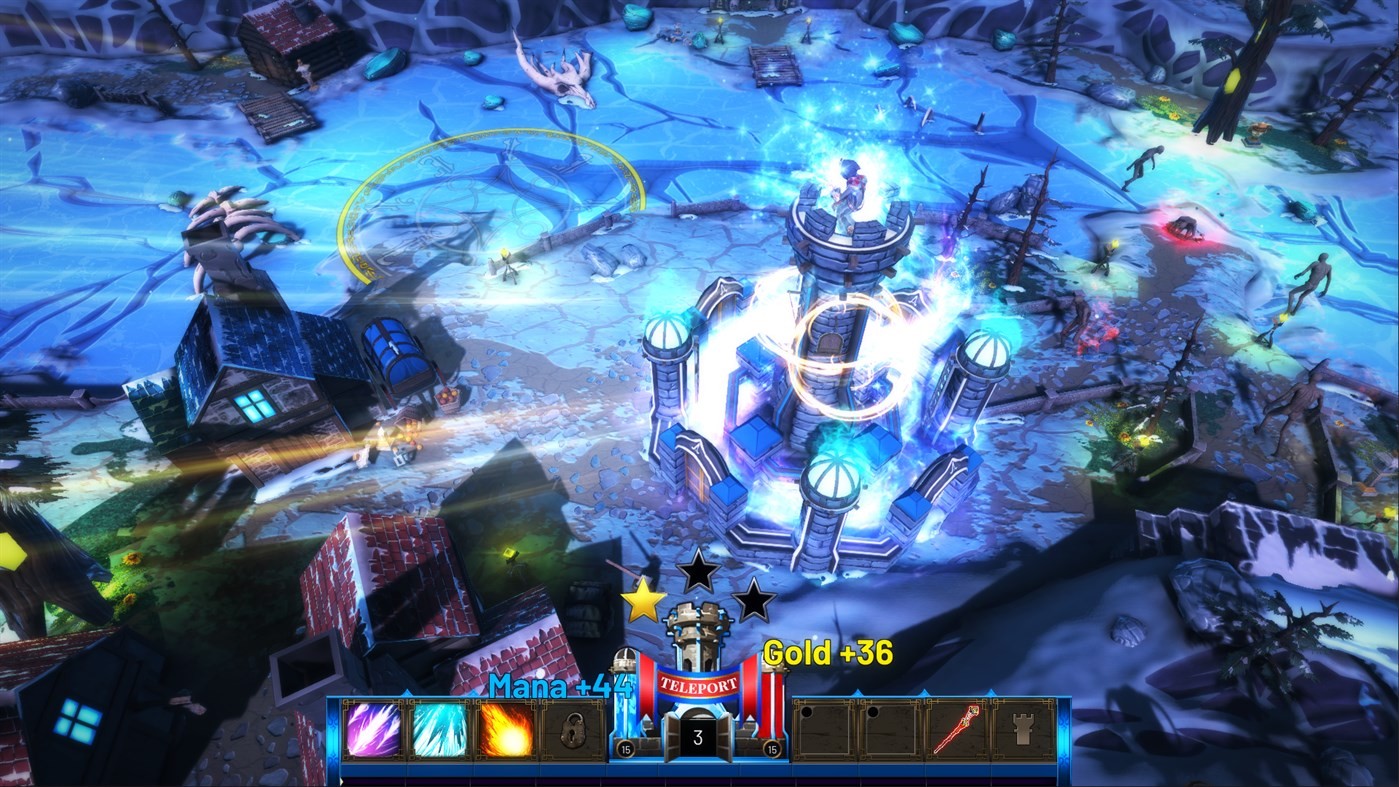 Tower defence games seem to be in short supply in this generation of games which I find surprising as most of the titles in this genre seem to hold the fort quite well and become solid entertaining experiences. When I heard that Wizards: Wand Of Epicosity would be hitting Xbox One I knew I had to try it more to try to feed some of that satisfaction from addictive tower defence games of the past. From my understanding, the concept for the game is seven years old and started as an Indiegogo project back in 2013. This project was hugely successful, and they amassed twice as much revenue as they expected equating to almost half a million pounds with 11,000+ backers. The success fed the development into the game at the time under a different alias of Tobuscus Adventures: The Game with the original ideas being worked on for mobile devices and Steam on PC.

Fast forward seven years and the original concept has evolved into Wizards: Wand Of Epicosity. I’m always wary of a project that has been ported from mobile devices and morphed into a console or PC release, simply because these titles are developed with weaker specification devices in mind. Usually a lot of these games are ported to Nintendo Switch hoping to make a quick buck when actually you can purchase the same game for a cheaper price on mobile devices. The game is now available for PC, Xbox One, Playstation 4 and Nintendo Switch, so how does it convert and run on current generation consoles?

Wizards: Wand Of Epicosity is developed and published by Game Mechanic Studios and Tobuscus Game Studios. The game sells itself as a fast paced tower defence game with magic, zombies and a teleporting castle. At the very beginning you will learn about two best friends, Tobuscus and Gabuscus who are on the run from the hordes of zombies. They come across a castle where they meet a wizard who will help them fend off the barrage of undead. The only issue here is that Tobuscus is actually involved with the accidental killing of the wizard, which not only racks him with guilt but leaves him scratching his head. Tobuscus then grabs the book of spells and utilises these spells in order to save the day. This where I was instantly consumed by this game. The animated cutscenes are so hilarious and well scripted. I can’t remember the last time I actually belly laughed at a game, but this has my approval and is the kind of title that will put a smile on your face if you’ve had a bad day. I’d honestly love an actual series made up of these animated characters as they are so well put together. 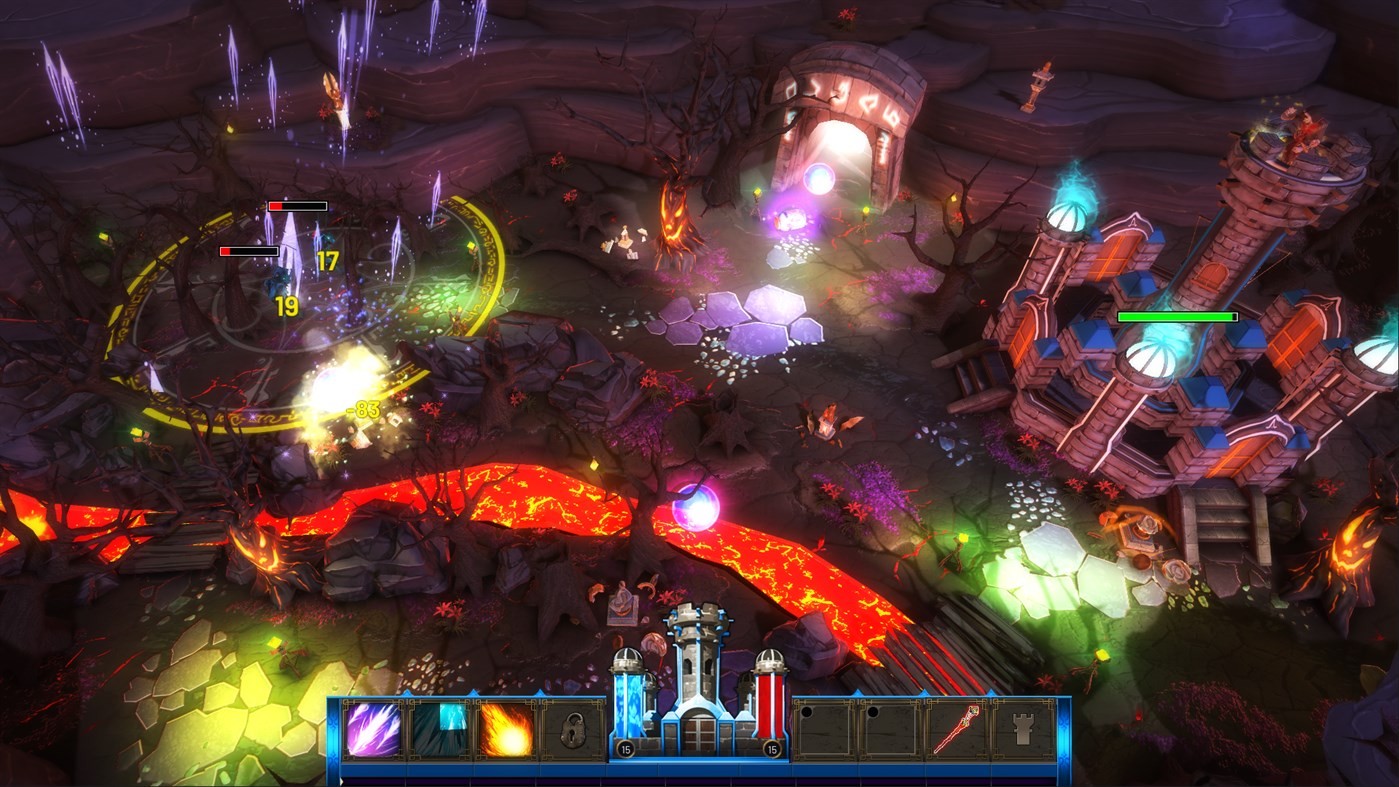 So after watching these spectacular cutscenes I was ready to see if the game itself lived up to the master class I just viewed. There is a total of twenty levels spanning across the Frozen Forest, which is where you’ll first start your time, followed by Molten Mountains. The premise is very simple here, and that is the fact that you’ll be protecting the castle in the centre of the map from the hordes of enemies that come from a multitude of different directions. The enemies will edge closer and closer to you, and it is up to you to control the variance of spells from Tobuscus. Abilities have a cooldown so you must balance and manage your attacks and use them sparingly and effectively to deal maximum damage at the correct moment. Each level has a star rating up to a maximum of three stars, obviously three stars are your aim, but just the one will be enough to progress you onwards to the next level.

On the very first level you start with just a couple of spells to break you in nice and easy against some slow moving tame enemies. As you progress deeper into the game, you will unlock more skills to equip to your slots as you level up Tobuscus. It was an enjoyable feeling, discovering and equipping more skills and seeing what they were capable of. There are blizzard abilities in order to freeze a bunch of enemies for a few seconds to full on fire attacks to deal huge damage. It’s also useful to adapt to the different enemies as some abilities will be more effective against certain types and adds that layer of strategy to the game.

Graphically the game is visually pleasing for a game of its calibre, its use of colours and the effects of the magic and spells blend in together perfectly. Sound effects are as you’d expect from a game of this kind and nothing to write home about. There are some moments where the environments can be a bit of a hindrance, sometimes it’s tricky to spot enemies in some on screen elements. However, I felt that this is done to make the game more challenging rather than an annoyance. 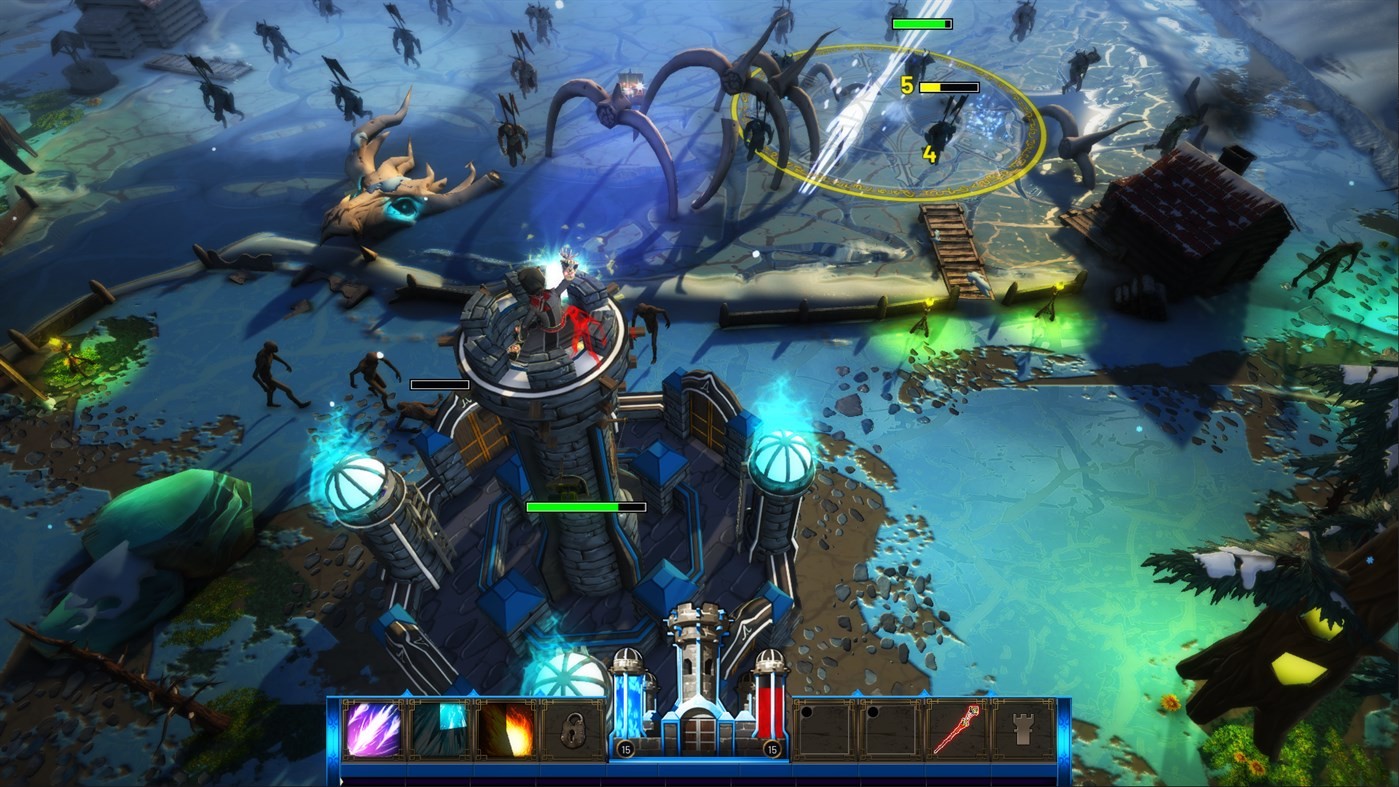 When I first played Wizards: Wand Of Epicosity I intended to play a few levels to get a feel then plan a bigger session to work on this review. For what I planned on being only twenty minutes to start with, I ended up playing for almost five hours on my first session. Be warned that if you love tower defence games, this is insanely addictive! The mixture of beating the levels, attempting to get three stars on all twenty levels and levelling up Tobuscus and his spells just really sucks you into this compelling game that just latches onto you with enjoyment.

I found the levels to be a little on the short side, but it didn’t make them lose entertainment value for this reason. I also felt that there could be a little more variation in enemy types as seeing the same ones can be quite repetitive at times, but again this is a minor criticism in the scheme of things. The control system works quite well with a controller, but obviously like most games in this genre I am sure they would operate a lot smoothly with a mouse and keyboard. Wizards: Wand Of Epicosity does a fantastic job of the controls on Xbox One and the fact it holds your hand a little at the beginning with a mini tutorial ensures that you understand the game and its mechanics.

I absolutely had a blast with this game and I was surprised at this, simply because mobile ports of games don’t always fare well on consoles, but this is an exception. A follow up to this title for PC and consoles only with focus on performance, graphics and more variance would make for a hugely successful sequel in my eyes. Wizards: Wand Of Epicosity is the perfect game to play if you have a few hours to burn and you’re out of options for games to play. Fantastically funny cut screens, plenty of levels to work through and the replay value of attempting to hit every level with three stars. There is something for everyone here, whether you want a challenge or something casual. There is a shortage of tower defence games this generation and this one is a big green tick for me and for sure in the top ten indie games of the year for me so far!

Wizards: Wand Of Epicosity is a tower defence strategy game which should not be overlooked. With witty and clever cutscenes and addictive gameplay with replay value, it has many magical moments.