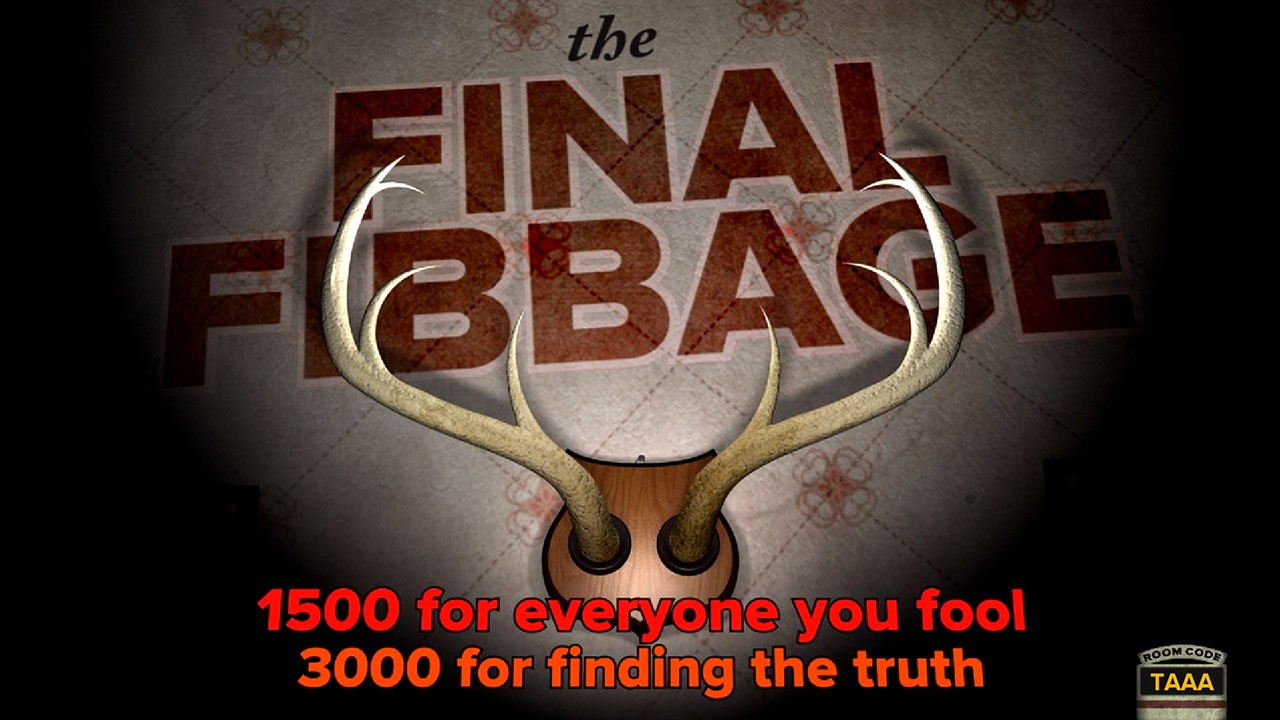 Lying. Such a major part of human pastime. From lying to your parents about where you were last night to telling your boss that the report is done and you just need to email it in, we have all lied to some degree over the course of our lives. Hell, it’s second nature to breathing in some people, and that’s reprehensible, but we can’t even tell because they’re such good liars. As we all know, the key to a great lie isn’t just confidence: it’s believability. As long as you can project your untruth with all the weight to sink into someone’s brain, you can convince a person that 5G waves cause COVID-19, that the ice shelves surround a flat world or that you definitely can’t get pregnant as long as we’re both standing up. The folks at Jackbox understand that the world is full of filthy liars, and they made a game out of it. Several, in fact, but we’re going back to the source, to the first Party Pack, to see what turned us all into professional fibbers. This is Fibbage XL, out on a solo release for the Nintendo Switch.

The concept for Fibbage is unique, and it only gets better in the right company. A group of players is given a factoid with some crucial piece of information missing: “To micturate is another way of saying _____.” Players then each come up with their own idea of what the dropped words could be, whether it’s wildly outlandish or somewhat close to the truth. Afterwards, everyone votes on what they think is the correct answer. Players who guess correctly gets a good number of points, whereas the creators of the wrong answers get points if they successfully convince other people to vote for them. It’s a classic game of espionage and deceit, but done completely at a level of wordplay and plausibility. 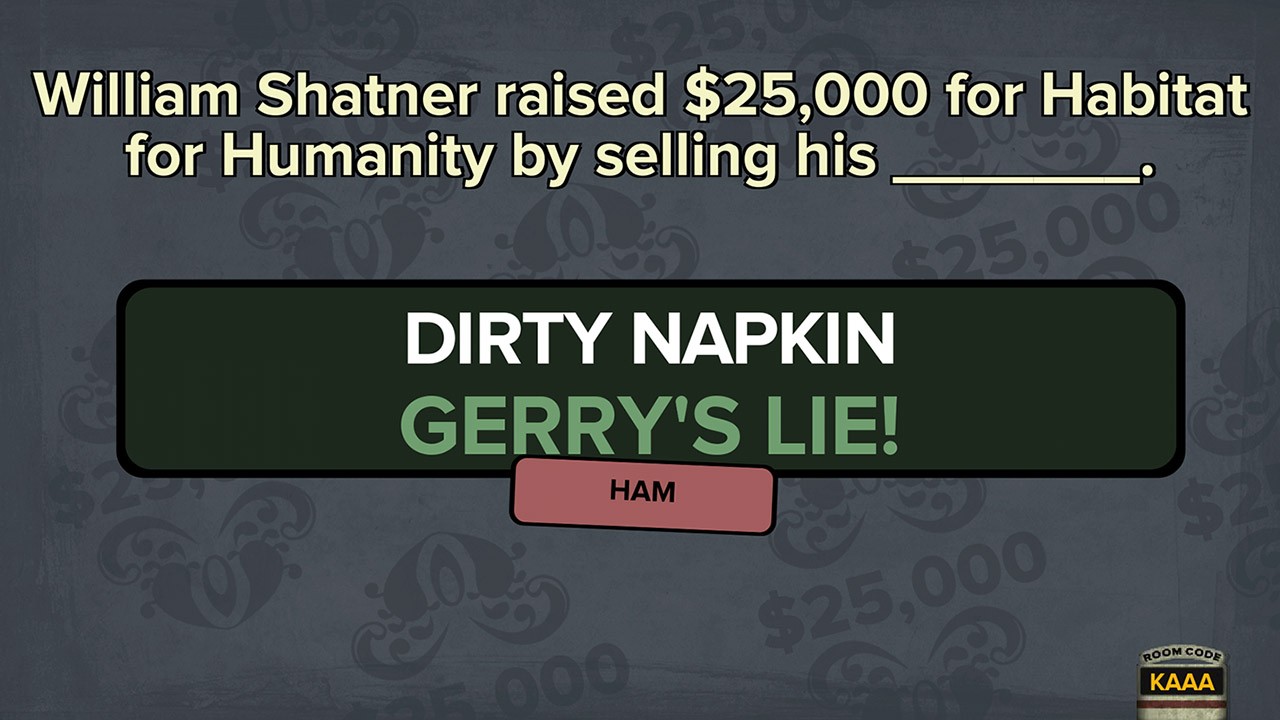 As we mentioned with just about every Jackbox game, Fibbage XL works only in a multiplayer setting, and it really, truly requires at least four players in order to enjoy it properly. While you can theoretically do it with as few as three, four is the magic number where there’s enough support from human components to make the best variety in terms of answers. You know your pool of friends. There’s someone who’s intelligent to a fault, someone who knows the right jokes to make things work, and someone who is really down on their trivia but still a great person to keep around. You might be one of these personalities, or you might be the outlier who needs these other three in order to make Fibbage sing. You can, sometimes, get a CPU to generate the extra space if you only have a couple of players, but the CPU players are trash. They’re not terrible at the game, but they’re just not clever, and you can easily spot computer answers versus human answers with very little difficulty. And clever is the name of the game in order to make this one sing.

While Quiplash can let players get by on pure jokes and crass language (if that’s your friend circle), there’s no easy way to win with Fibbage XL. First and foremost, you need to have a good amount of trivia within your mental halls to pull from. The best way to win is to know the answers without needing to fake your way through it. The next layer, though, is knowing how to get on the same wavelength as others and generate plausibility. Take, for example, the word masticate. Almost everyone will know that it means “to chew,” but what about when you get to more esoteric language, those words that you needed for the SATs and then promptly forgot? Or those names and dates that were important back during your standardized high school tests, but you haven’t thought about since then? Also, you aren’t expected to know each and every detail about a celebrity’s free time, but it certainly can help when factoids about what Keanu Reeves’ name means, or what Jay Leno named his first car. Being able to look at the prompts and divine a possible word that you KNOW is wrong, but sounds right is how to boost yourself even higher. 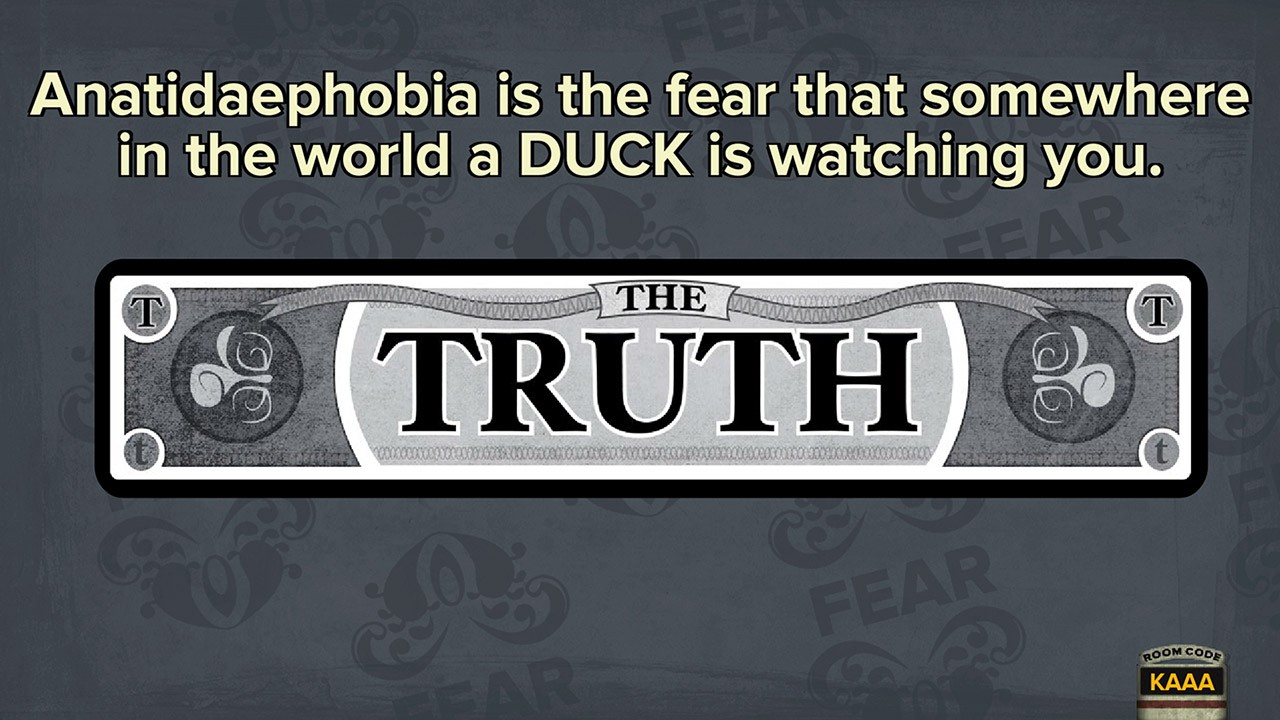 Fibbage XL has a great number of prompts for a game of this age: there’s already been a secondary sequel for Fibbage and, knowing Jackbox, we’ll see a third instalment in the future (a third Quiplash is slated for the fall, huzzah!). However, Fibbage XL is virtually indistinguishable from the release that comes packaged with the original Jackbox Party Pack, and that becomes a bit of a rub. Containing Fibbage XL, Drawful (the first one) and a real You Don’t Know Jack adventure (plus two other games), the Party Pack is a guaranteed good time, while Fibbage XL is just that: a singular entity. It’s a good price, and Fibbage XL is genuinely fun, but it’s only just the one game. I’m a bit more iffy on Party Pack 2, but the first Party Pack is solid gold from start to finish, so, price aside, it’s hard to avoid recommending it as a full set.

Fibbage XL also works on an online level that Quiplash can’t quite attain, so it’s worth noting that I think this one is better for long distance play. Quiplash allows players to enjoy and be silly with one another, so facial tells aren’t really necessary to be worried about. With Fibbage XL, you can think and ponder and really create great lies without someone analysing you too hard to see if you’re the one who made up a particular answer. As another game that’s almost purely visual, it’s got a minimal install footprint, resides on the smartphone easily, and can be burnt through in about 15 minutes or fewer for a full game. It doesn’t have the complexity of Fibbage 2 with the lie detector element, just the straightforward “to tell the truth” aspect.

It’s great, it’s clever, and it’s easier to just pick up this standalone than the whole set of games as long as you know that you can get a gang of players together. Make your friends’ siblings or parents play if you can’t get enough people, don’t let the CPU generate someone to join. Anyone and everyone will want to join in: after all, they’re all great liars.

A great game for liars or people who think their friends are liars, but lie about not thinking they’re liars.