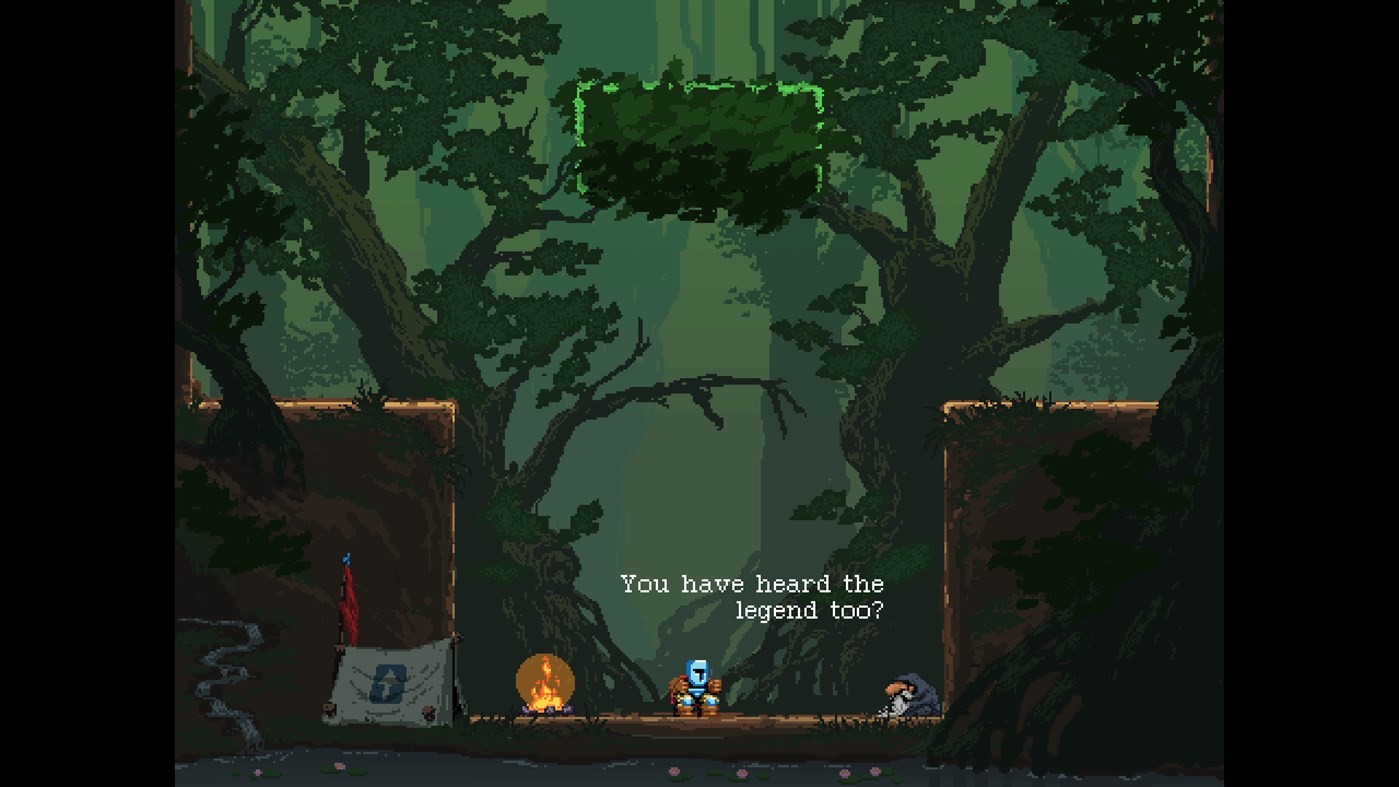 Have you ever started a game without realising that you have purchased a one-way train ticket to frustration city, population you? A game that should be so simple to play due to its basic gaming premise, but the more you try to proceed, the more you fail? A game that is so brutally difficult that you regret even starting to play it? If you can say yes to all three of these, well, heck! Even one of these, then you will know exactly how I felt starting Jump King. Jump King is a deceptively easy looking title, that will make you want to smash your controller into a million pieces, all while screaming with rage. This 2D platform title has you controlling a knight who is on the quest to uncover the truth behind a mysterious legend. Climb the platforms, make sure you don’t make a mistake, and if you are successful, a smoking hot babe will be awaiting your arrival. This quite literally is the stuff of legends.

Jump King has been developed and published by Nexile, a title that is so tough that it could well be considered the Dark Souls of the platforming world. This brutal challenge is absolutely simple to master. You must consider the height and distance of the platforms on the screen, holding down the A button will decide the amount of power placed into each leap, and choosing the direction with the analogue stick will decide where you are going to be flying. All you have to do is to get the power and platform choice correct, and you will soon be in the arms of that hot babe at the summit. One minor error, and you will be falling, falling, falling to the very bottom, cursing your luck, shaking your head, and starting over again.

With this being such a linear premise, I was surprised that you were given the freedom to explore different areas that can be found on your ascent. Each separate zone has its own unique look and style. As you explore, you will have to adjust your game style in order to overcome any new obstacles that you encounter. The example that springs instantly to mind is “The Swamp” all movement is slowed to a crawl, as you jump it’s almost as if you are moving through syrup. What you have learned about the game to this point has to be thrown out of the window, and you now have to re-educate yourself with this altered gaming mechanic. You can, of course, ignore these unusual and demanding sections, but why miss out on the opportunity to enrage yourself further, it’s very much a pain and pleasure sort of experience. 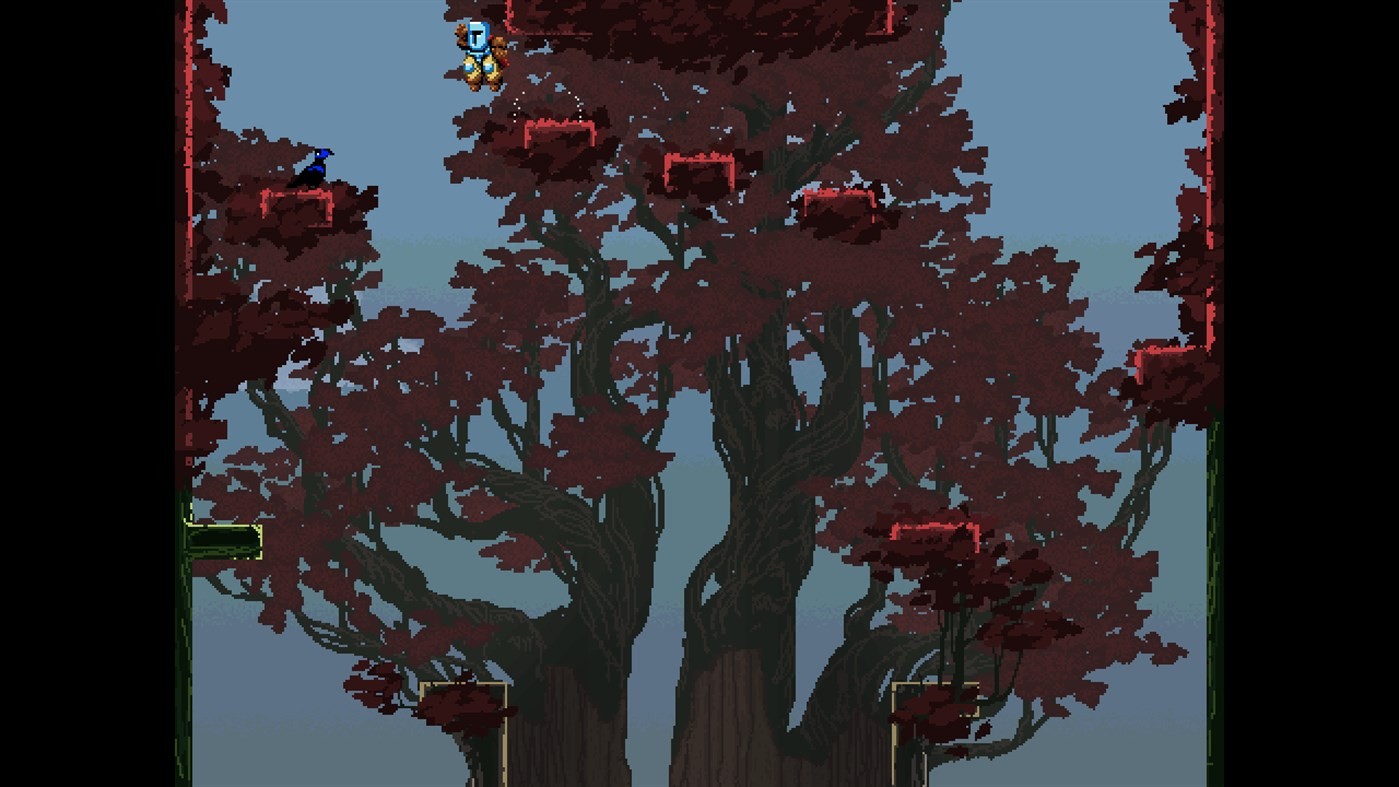 When a game measures your progress through the number of jumps that you have completed, and more importantly the number of falls you have achieved, you know that the developers are a little sadistic in their approach. Though it was a tooth grinding, fist-clenching game, there was nothing more rewarding than beating the section where you had been stuck for minutes on end. I found myself having to walk away while the game was still on, just to compose myself. I would always return with renewed hope, and determination that I would succeed. I classed success as getting to the next platform, baby steps are the way forward in Jump King. Each area that you discover has a character who will deliver witty one-liners or something that could be considered as useful information. It doesn’t really help in the long run, but it does break up the progress and gives you a small moment of respite from the unforgiving action.

Set in a retro and dark world, Jump King doesn’t have world-class graphics, in fact, it wouldn’t look out of place on a Mega Drive or a SNES. What was nice, was the easy to identify platforms, and the ability to plan your course of action on each screen. As you jumped to the top of each section, the action seamlessly moved to the next zone, unveiling the next arrangements of obstacles to overcome, long before you had to tackle them. The random narrative from each character you found was presented in an old school white bubble, with greyish brown text colour. This was a nice touch and reminded me of RPG and adventure games that I had played in my youth on the Atari and Commodore 64. The colour palette used was limited to the darker tones, this made the world feel quite sinister and desolate. Each different section that you jumped through had its own unique look and feel to it, this kept the title from feeling like it was constantly in a loop, and stopped it from getting boring.

As you open the game, you are welcomed by the most glorious retro 8 bit sound, that sets the scene perfectly. It feels like a medieval adventure from the start, and I thought brilliant, I get to explore while being treated to some familiar 90s audio. Unfortunately, the music cuts out once the game begins, and you are only accompanied by the ambient sounds of the environment that you are in. The background sound was great, it altered depending on which zone you were in, and worked well. As did the basic noise of the jumping, and the collision sound as you hit into any surfaces. But, I couldn’t help thinking that Nexile missed a trick, by not adding music throughout. It would have helped to distract from the insane difficulty, and it could have built a nice atmosphere as you got ever closer to your prize at the summit, or emphasised your plight as you fell further away from your goal. 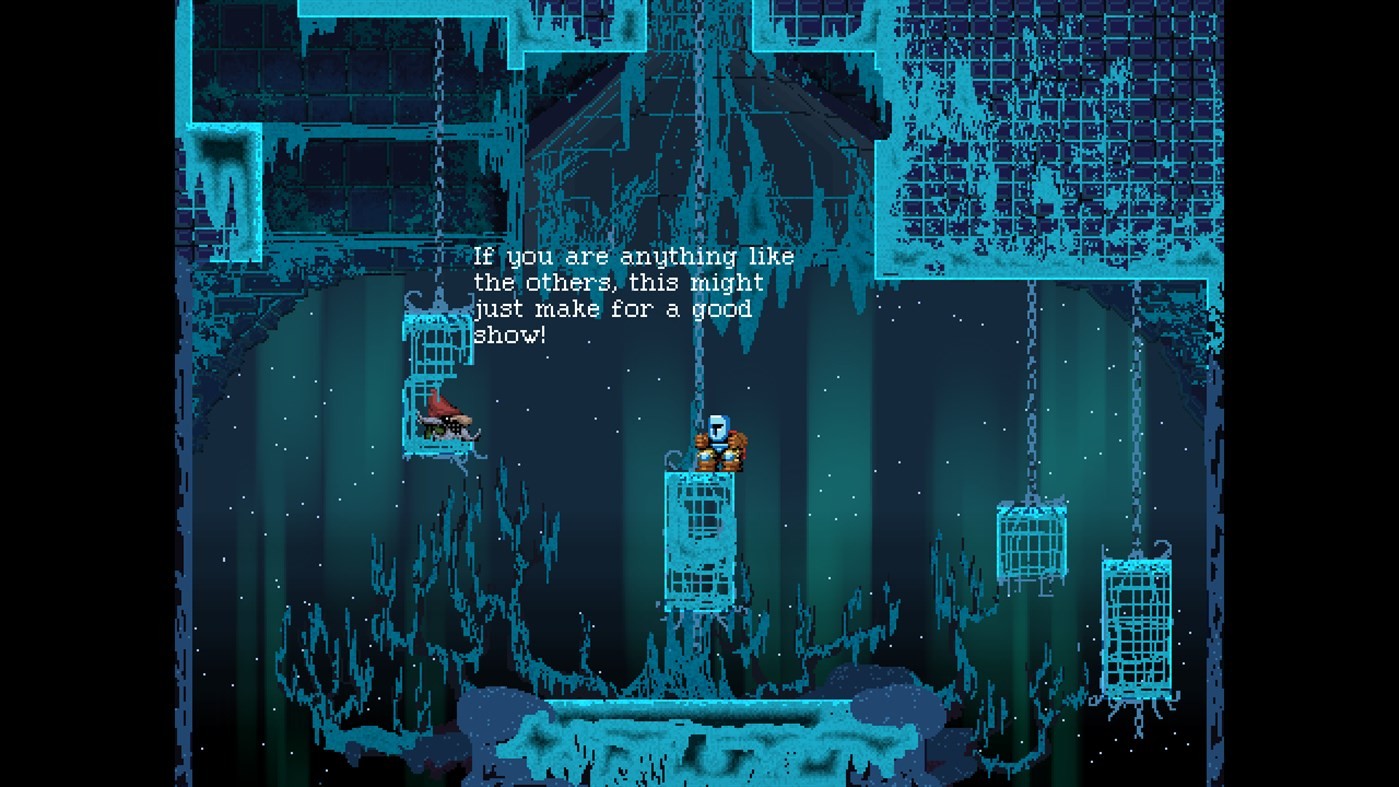 A game that simply asks you to complete one task, namely, jump in a certain direction, with a certain amount of power applied. As such, the control system is extremely simple to get to grips with. Once you have started to move, you may not alter the path, nor can you prevent the knight from falling. Once you release the A button, you must accept your fate, whether the outcome is positive or negative. I loved the controls, my only negative, was the lack of indication to how much power you had added. This meant that failure was almost certainly going to happen, and when you did fail, it was normally spectacular and was met with an eruption of anger, and a big slice of rage quit pie. Practise makes perfect in Jump King, as does a picture-perfect memory. If you can remember all the ideal positions, and routes to take, then you will be able to fly through without any issues, it’s just a shame it takes a lot of failures to be that good at this title.

With such a simple premise you may be worried that there isn’t a lot to keep you interested. It’s fair to say that just jumping, and falling a lot isn’t much fun. But, there is something rewarding about making your way to the top, and with a number of time-based achievements, and error-free tasks, this one will drive the completionists amongst us crazy. Jump King treads a very fine line between wanting to keep playing and wanting to uninstall it instantly. Personally, I’d say though it is infuriating, it’s quite the cathartic experience, and you will be richer for pushing yourself through to the end. This is of course emotionally speaking, by the time you have reached the top, you will probably have gone through 5 controllers, so financially speaking you could well be much worse off. Once you have completed your first run-through, you are given the opportunity to try again with a whole new babe to meet, and also an NG+ mode to try out. If you look to just finish the main story, this will take you approximately 10 hours, if you fancy that 100% crown, be prepared to sink between 35 and 40 hours to obtain all 48 achievements.

When I think of platform titles, I think colourful, and fun, with a small element of puzzle difficulty. What I never picture is a dark and difficult game, which given half a chance will make its gamer base cry tears of frustration, and tears of joy when they finally complete it, whenever that may be. Jump King is so tough that it’s going to be a mark of a true warrior if you happen to make it through it in one piece. The developers really have done a great job at creating such an enthralling game based around such a simple premise, it certainly won’t be for everyone, and if you happen to have anger issues, then this may not be for you. Would I recommend it? Yes, I would. Though it pushed me to the limits of my patience, the reward of getting my prize was worth every second of agony. Get on your jumping boots, it’s time to leap to the top, remember there is a hot babe waiting for you.

Who can resist the prize of a hot babe? The knight in Jump King certainly can’t. All he has to do is jump every platform perfectly. Failure to do so will result in rage, and more importantly no babe!