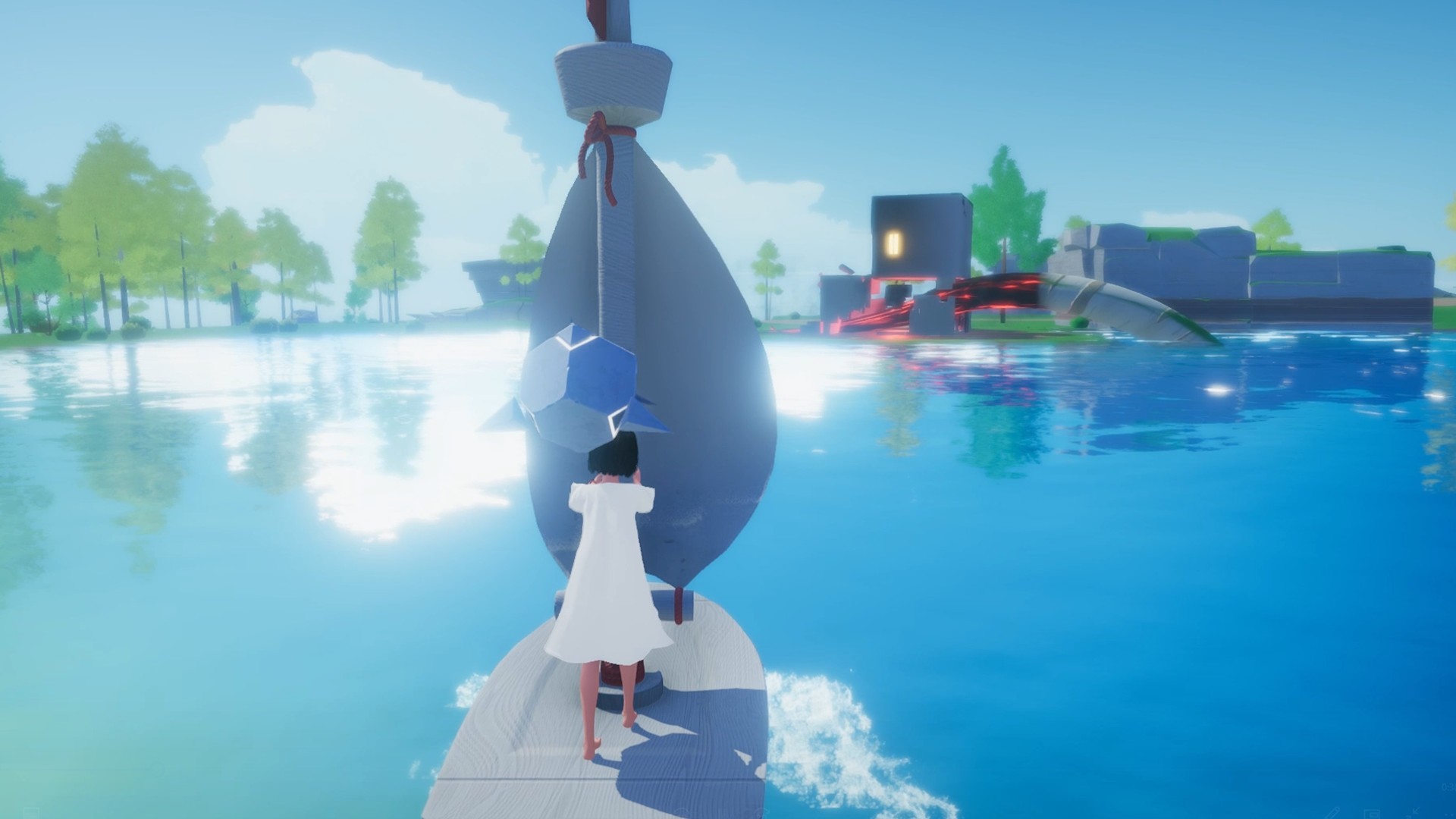 After the success with My Time in Portia, the very same developers released their next game recently: Ever Forward. It was a given that I would give this game a try, although it looks completely different from the predecessor. Regardless, the presentation drew me in. I’m usually not very fond of puzzle games as they’re often too complicated for me, but Ever Forward is such a lovely game that I can look past the gameplay and luckily, I enjoyed it in the end despite being worried about the gameplay at first.

Ever Forward revolves around a girl called Maya, who is trapped in a strange world. Although some part of this world is actually realistic, others are not, and thus, she finds herself between reality and imagination. Slowly, she unlocks her memories, although that means that she eventually has to face her demons. However, Maya is not entirely alone as there is a strange cube following her around during her journey. 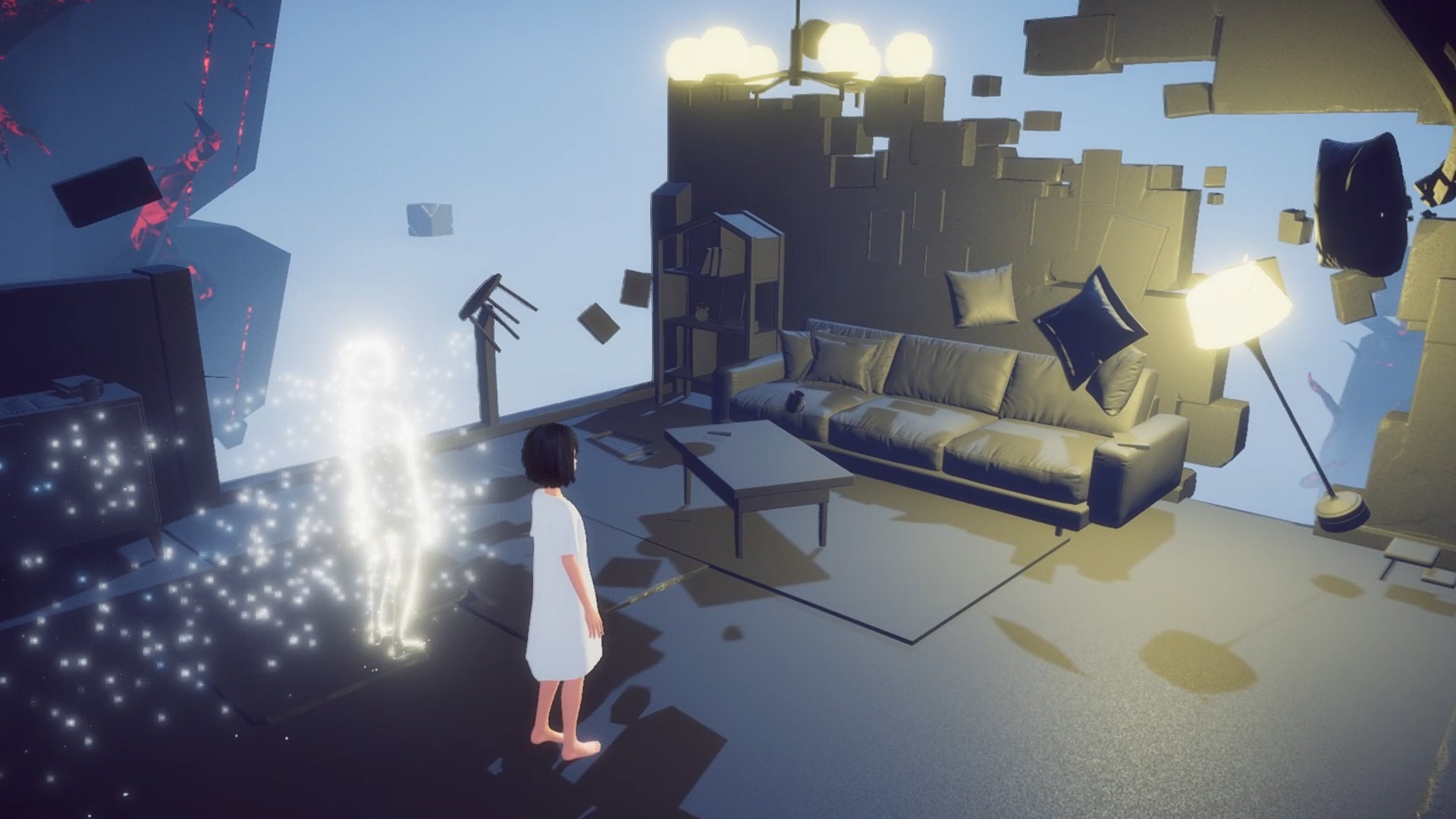 The story is not in the foreground in Ever Forward. However, I found myself in one or another emotional scene. Despite not knowing what is going on at first, the happenings slowly make sense and were starting to add up. The twist of the story wasn’t entirely unexpected, yet I liked the message behind it: Always value the time with your family. However, I found the story was slightly confusing at times and I rarely knew what was the real deal. A huge issue I had here, which greatly disturbed my immersion, is that a few lines didn’t have subtitles. This is a no-go given the voice-acting is in Chinese, so I had no clue what the characters were saying. This sadly happened more than once in the latter parts of the game.

After completing a puzzle, the game takes the player to a cutscene. I found the gameplay and cutscenes well-balanced, and neither of the parts of the game felt too tedious or dull. I had a lot of joy finding out more about Maya and her family and along with that, some puzzles were tricky to solve too and required me to think outside of the box. I sometimes got stuck and I’m not going to lie, a few of the puzzles are extremely frustrating and I didn’t have a clue how to solve them. Although all of them are so short, I spent a lot of time trying to complete them due to the difficulty. But luckily, this only applied to the minority of the puzzles.

The puzzles are straightforward. The player can fly with their cube to the destination of the puzzle, and it’s the key to start them at the same time. During the puzzles, there are other cubes the player needs to bring to the end of the puzzle to successfully completing them. If they reach the destination without the cube, the game won’t progress. Another mechanic here is that the player has to avoid small robots. Although they don’t move around, they will turn around to check the source when they hear a noise. It slightly reminded me of CCTVs, except that they might turn when they’re alarmed. For some puzzles, there are multiple robots and cubes available, which made the whole process trickier. 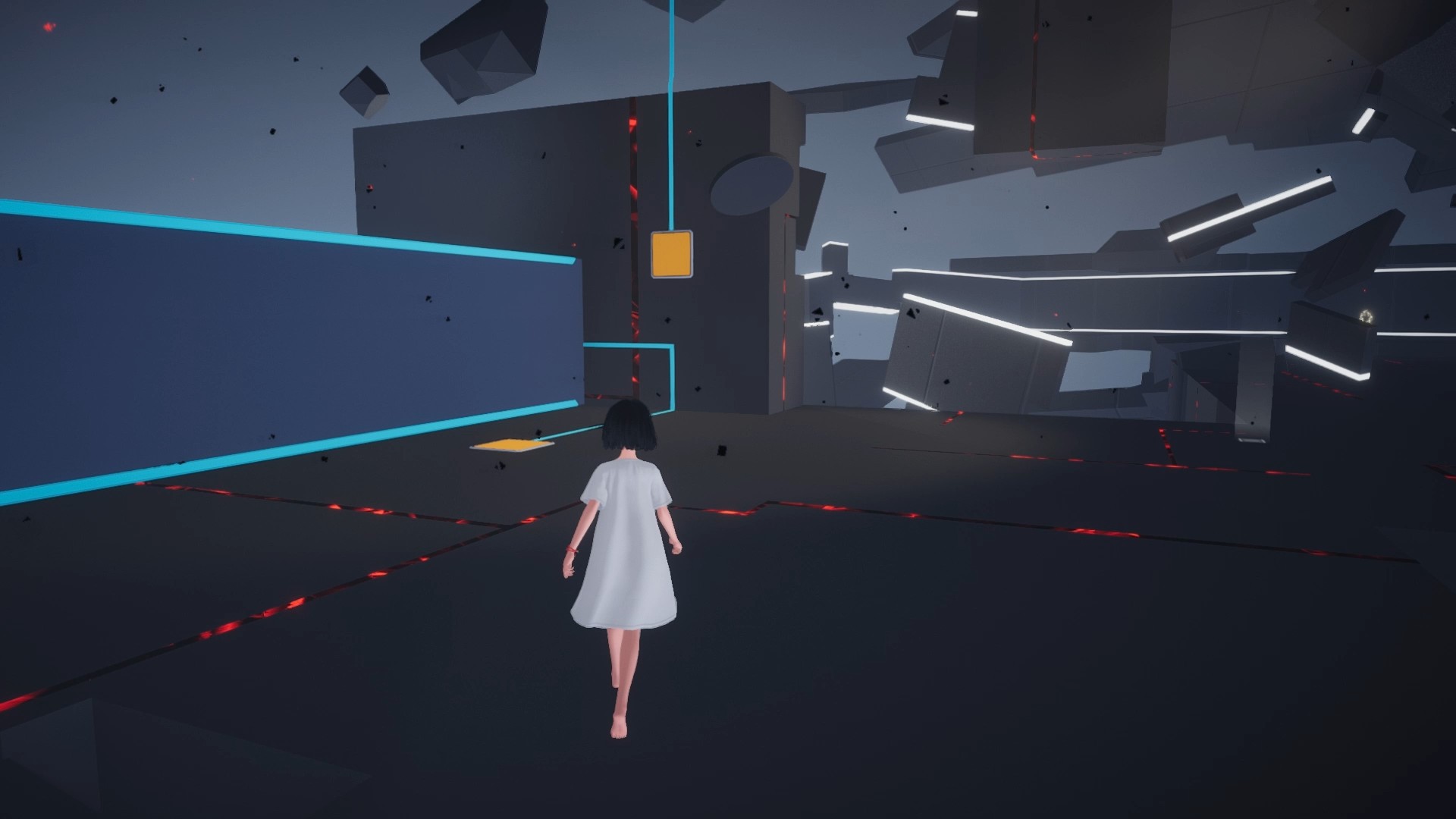 I loved that each puzzle was so different from each other. Some are very simple to solve and only require the player to avoid the robot, but others are more complicated and it might not be very obvious right away how to solve them. Luckily, there are leaves I could find throughout the game that helped me when I got stuck. You see, it’s possible to just activate them to make hints visible. It’s helpful that the leaves and hints are placed in the same place where the action has to be made. Although it’s important that they’re only hints and don’t tell the player what exactly to do.

As aforementioned, the graphics are stunning in Ever Forward. I had a lot of joy just admiring the environment. The player can enter the puzzles in certain buildings that are easy to spot as they’re very dark, compared to the rest of the game, and I loved that the player impacted the world as the buildings changed after completing the puzzles. A minor issue I noticed is that I found that Maya’s face looked slightly odd. I cannot put my finger on what the issue is, but she looks lifeless and with no emotions. On the other hand, I didn’t get to see her face very often anyway, as I had to focus on the puzzles, so that wasn’t a huge problem.

Ever Forward built up a wonderful world, and I honestly wish the game was longer. I had a lot of fun solving the puzzles, although some of them are really frustrating and meant to be very hard. Regardless, puzzle lovers will be delighted at the mechanics this game has to offer, as it truly requires its player to think outside of the box. That being said, while Ever Forward doesn’t contain an outstanding story, it’s such a lovely game, with emotional scenes and puzzles that entertained me throughout the playthrough.

Find your memories in this wonderful world while being trapped between reality and imagination.