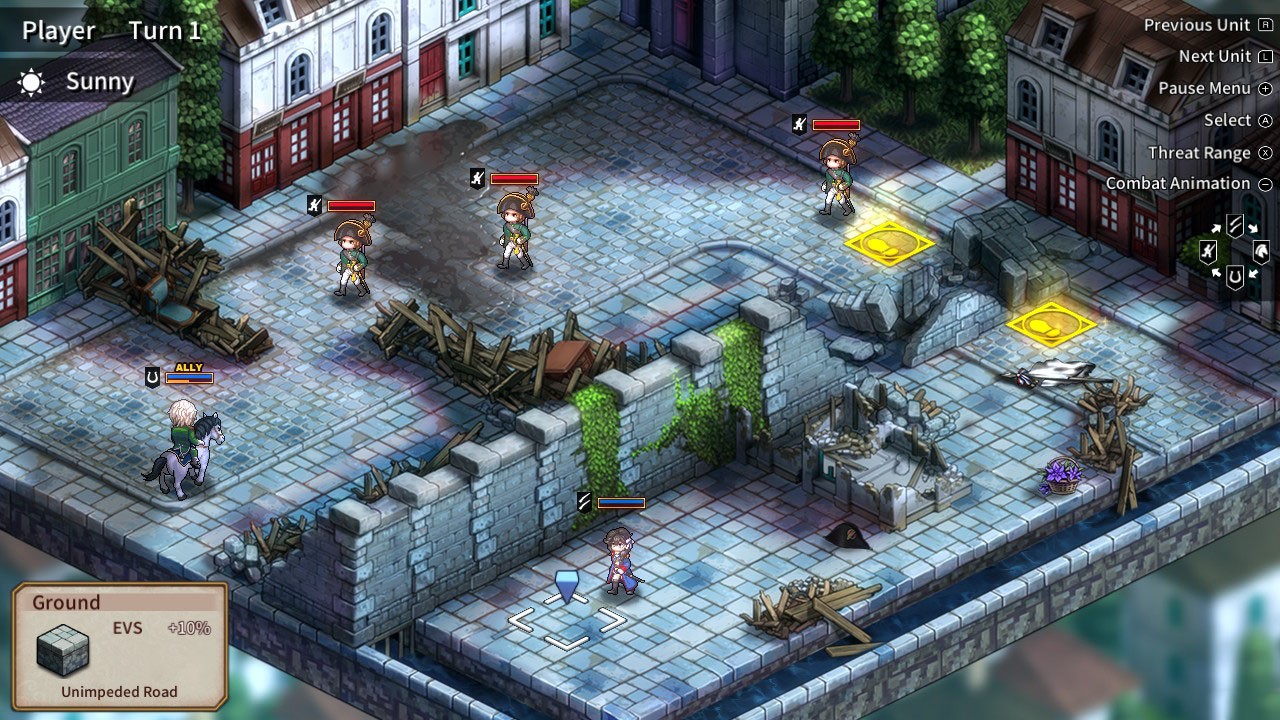 Banner of the Maid is a tactical and turn-based RPG with anime aesthetics made by the Chinese studio Azure Flame. The game comes with elements that remind me a lot of Disgaea and similar ones, but with a much simplified and straightforward gameplay. The plot is focused on Napoleon Bonaparte’s fictional sister, Pauline Bonaparte, borrowing some elements that actually happened in the history of this military leader during the French Revolution to make its own story-driven game. Unfortunately, for my disappointment, Banner of the Maid has some Visual Novel genre elements and a lot of chitchat, which annoys me a lot since I’m a very gameplay sort of person. Not that I’m against deep stories in games, it’s just that I don’t like to have a bunch of reading to have some fun, a similar issue that I’ve had recently when I tried The Legend of Heroes: Cold of Steel III, for example, an RPG game that the most of the people have rated very high – and I disliked.

Speaking of the localization, it’s not bad at all, but of course it has some bad translations and writing since the developers and not English natives, resulting in some weirdly structured sentences – but not always. The soundtrack is great, bringing a good sound design in terms of background music and sound effects that take you to that age. But the Chinese voices (only option available) might be a bit awkward for some, since the game is about French Revolution.

Graphically the game is really something! The graphics are gorgeous and really well drawn. You could easily tell me this is a Square Enix game, and I’d buy into this. The characters and scenarios remind me a lot of the Final Fantasy series and, in terms of indie games, Banner of the Maid is far ahead of most of them. But there’s something that could irritate some people: huge boobs. A lot of female characters are sexualized here, and I’m not exaggerating: boobs are everywhere. At some point you’ll certainly meet Paulette, and then you can tell me that I had a reason. But, of course, this doesn’t impact on gameplay, neither on the story. So, why should you care about it? 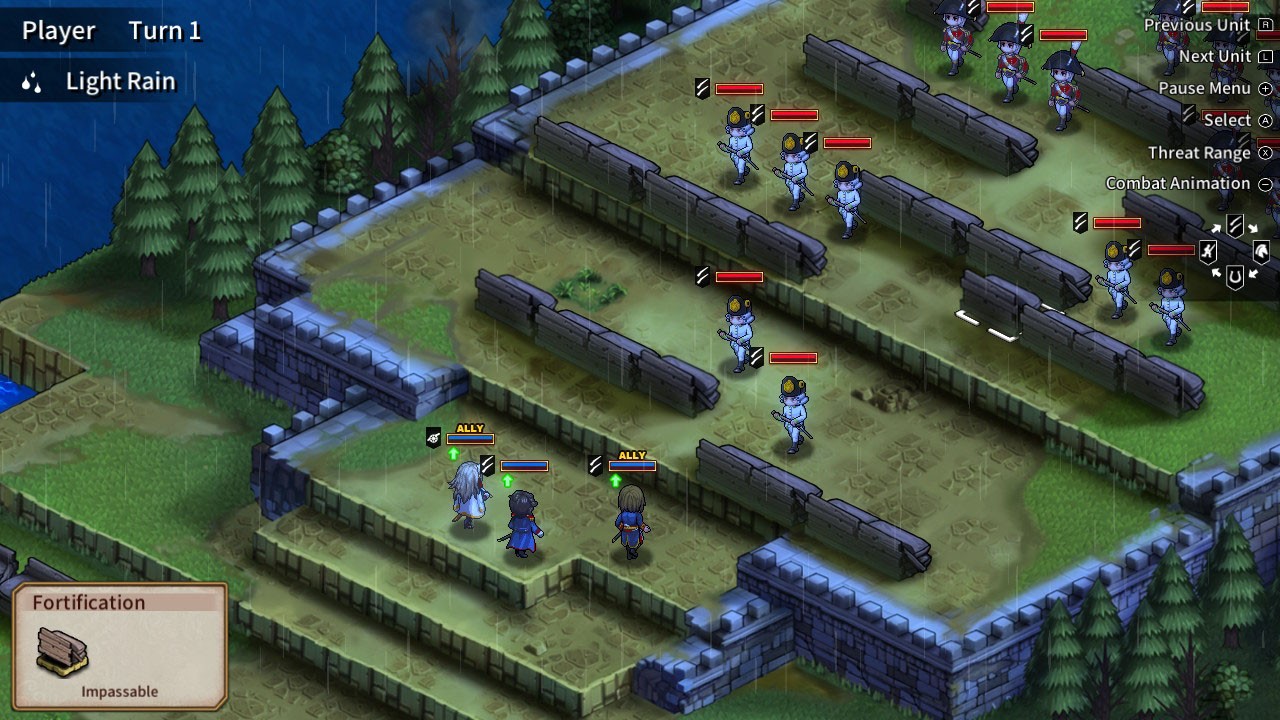 Anyway, when it comes to the tactical mechanics, Banner of the Maid shines a lot through a clear gameplay, taking influence of games like, again, Disgaea and even Final Fantasy Tactics. Banner of the Maid offers fast paced fights which I felt no need to have a fast forward feature, fortunately. You are even allowed to skip the attack animation. Despite the excellent battle system, the developers chose to not allow diagonal attack when it should have been available, which makes me wonder the reason behind that sort of decision, and this becomes more weird because some characters have these diagonal attacks even though restricted to the ranged ones.

Each battle has its own defeat and victory condition, besides a challenge to gain extra rewards. Some events could also add obstacles or barricades to the environment that need to be destroyed in order to reach the enemies or the main objective – pure strategy. Not being ironic. The basic commands available are the movement (each character has its own), attack, Inspiration that works like temporarily perks, Heroic that works like special boosted up attacks, the use of consumable items, exchange of equips with close partners and Wait to end a character’s turn. Apart from that, it’s possible to change the party equipment and exchange these equips during a player’s turn, as well to save progress wherever you want – even if you’re in the middle of the 5th turn or whatever.

It’s also very interesting the fact that in battles there are ground and weather elements that impact directly on the gameplay, buffing or nerfing units. The rain decreases the chance of enemies from dodging, whereas some rough grounds affect the movement range and higher grass can hide your partners, for example. After one battle and another we can choose between answers, during dialogues on visual novel style cutscenes, that can reward the player with new skills or items, an interesting approach to have since the choices actually exist for something useful instead of only giving you only more reading stuff. Once advancing in the story, Pauline will meet new people, resulting in a wider roster to deploy on battles, each character having its own class – and the upgradable one – as healer, supporter, artillery, frontline, etc. Additionaly, each class has its our advantage against others. Don’t worry, you can manage your party in the office. 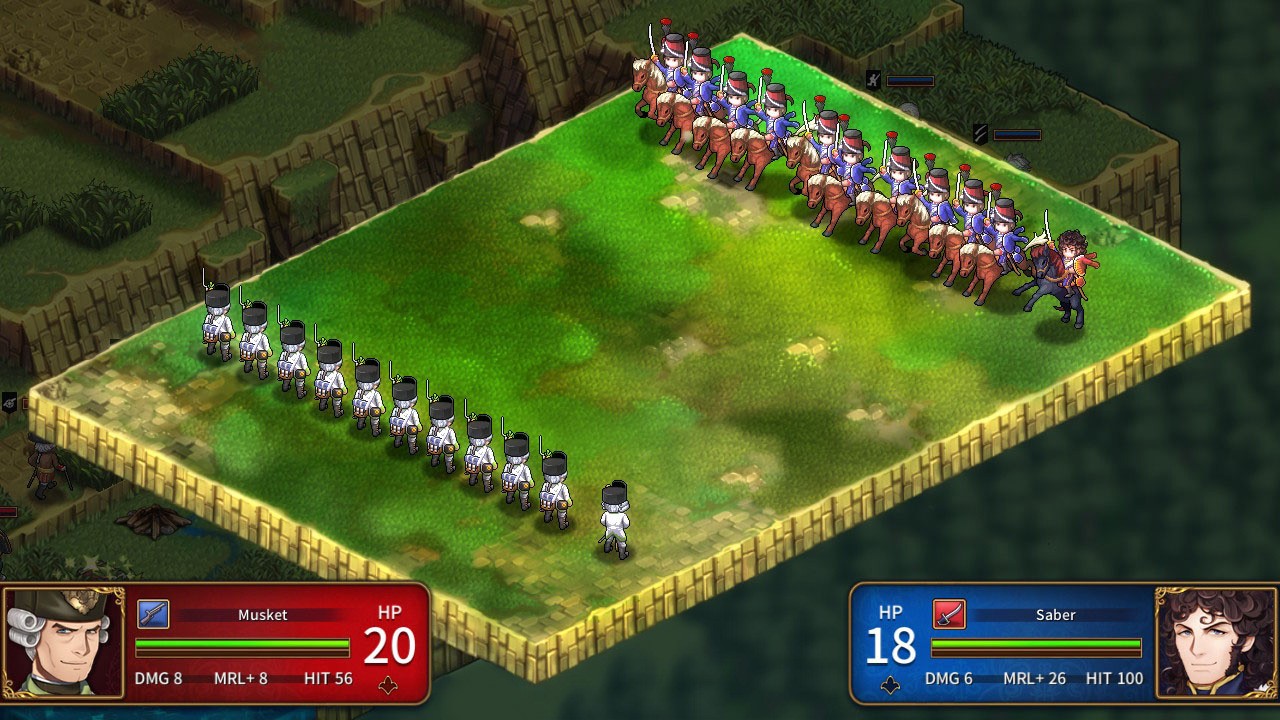 Finally, after the gameplay and battle’s quality, the dialogues are really boring, making use of static sprites that are flipped horizontally in some situations, presenting a little variation on the mouth, expression and so on. Basically, a lazy way to tell a story, to be honest, but quite understandable for any low budget game and indie companies. It could be just my opinion, but I don’t like to sit down while seeing a bunch of text to understand the story. Judge me. They could have made some interesting manga-style cutscenes at least, with a superb environment and characters inserted in scenarios, instead of trusting in the player’s imagination through texts explaining the situation in order to give immersion to the scene. I don’t think flooding players with a lot of dialogues to read is a good justification for bad storytelling skills.

Another bad thing is that you’ll miss a lot of the plot if you decide to skip all the chatting, becoming confused about what’s happening exactly. Although in-battle dialogues seemed relevant enough to me, and they really should have kept the story happening during battles only or at least cut off some of it outside of them to sustain the immersion.

This alternative story of the French Revolution shines through an excellent tactical RPG, but you’ll still have to deal with tiring dialogues and visual novel aspects.