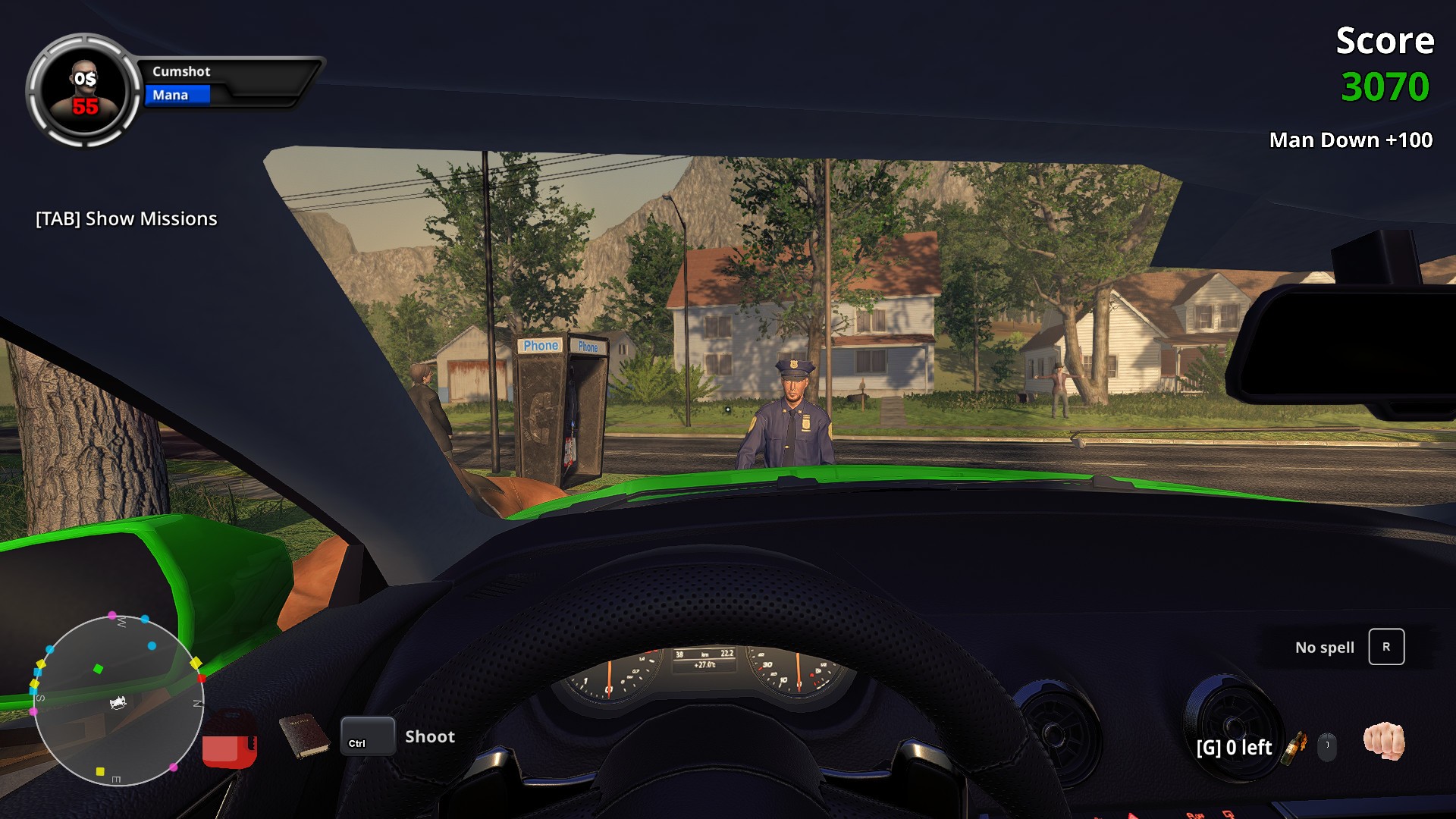 THE FOLLOWING REVIEW CONTAINS PROFANITIES AND CONTENT OF AN ADULT NATURE, YOU HAVE BEEN WARNED!!.

It’s very rare that you get the opportunity to combine two of your passions, so when the time came I jumped at the opportunity. So cometh the hour, and cometh the man, I placed my latest game on download and sat there giddy with delight, poised ready to hit the play button. While waiting for my game to install I had the pleasure of looking at the reveal trailer. The developers caught my eye with the bravest of lines: it was bound to happen, a game that you need in your life so bad, and finally, a game that will change your life. With such powerful words I was determined to try this game. However, it’s not every day that you are welcomed to the opening menu by a thrusting and dancing man in just his pants, my expectations were well and truly set. I probably shouldn’t have set the bar quite so high when I offered to review Ultimate Games’ latest title….. Wanking Simulator.

With a title so brash, I should have known what I was letting myself in for, but even I was surprised by the levels of crass language, and imagery. Each element of play has been designed to either make you laugh or be shocked, in all honesty, I did giggle at times, it’s hard not to when the protagonist is beating the living daylights out of someone one moment, and then standing over their cold body masturbating the next. But the laughter is short lived, and that is a shame as without the comedy element in the game, it’s just a poor copy of Grand Theft Auto, oddly mixed with Goat Simulator.

I have to remember throughout this review that Wanking Simulator is in an alpha stage at the moment. The code I was provided was a playable demo. I only got to see a small element of how the title has been developed. Fortunately for me that it was only a small section, as in its current guise I had about as much as I could take. I have to say that the developers have done a nice job on some of the titles aspects, such as; the gaming world is large and completely open for the player to explore, the quests look in depth and are challenging, and the HUD is very good and enabled me to navigate the land easily. Unfortunately, at this stage there are more negatives than there are positives.

When I look at smutty and crude comedy, I always focus my attention on the likes of South Park; not only do they make their comedy relevant, but they are also very intelligent with the way they deliver it. Ultimate Games really could look at how they deliver their material and tone back on their approach a bit, the prime example of this is the lead character. He is somehow blessed with superpowers, one of these is the ability to spawn a rifle in his pants. I neither see the comedy element nor the requirement to implement such a thing. Another area that confused me was how the game’s story was laid out, the main character is hell bent on revenge. This is played out in 2 ways, firstly he decides he wants to smash up everything in the town he used to live in, which is “hilariously” named “Gay Bay”. The second is he then decides he must masturbate over the result of his wanton destruction. This is kind of okay as it follows the theme of the game, but then the developers decided to make him a pot head LSD fiend for no apparent reason, it felt like they mocked up how they wanted the game to pan out, couldn’t agree on which route to follow, so decided what the heck let’s do it all, it unfortunately makes it a very busy mess. 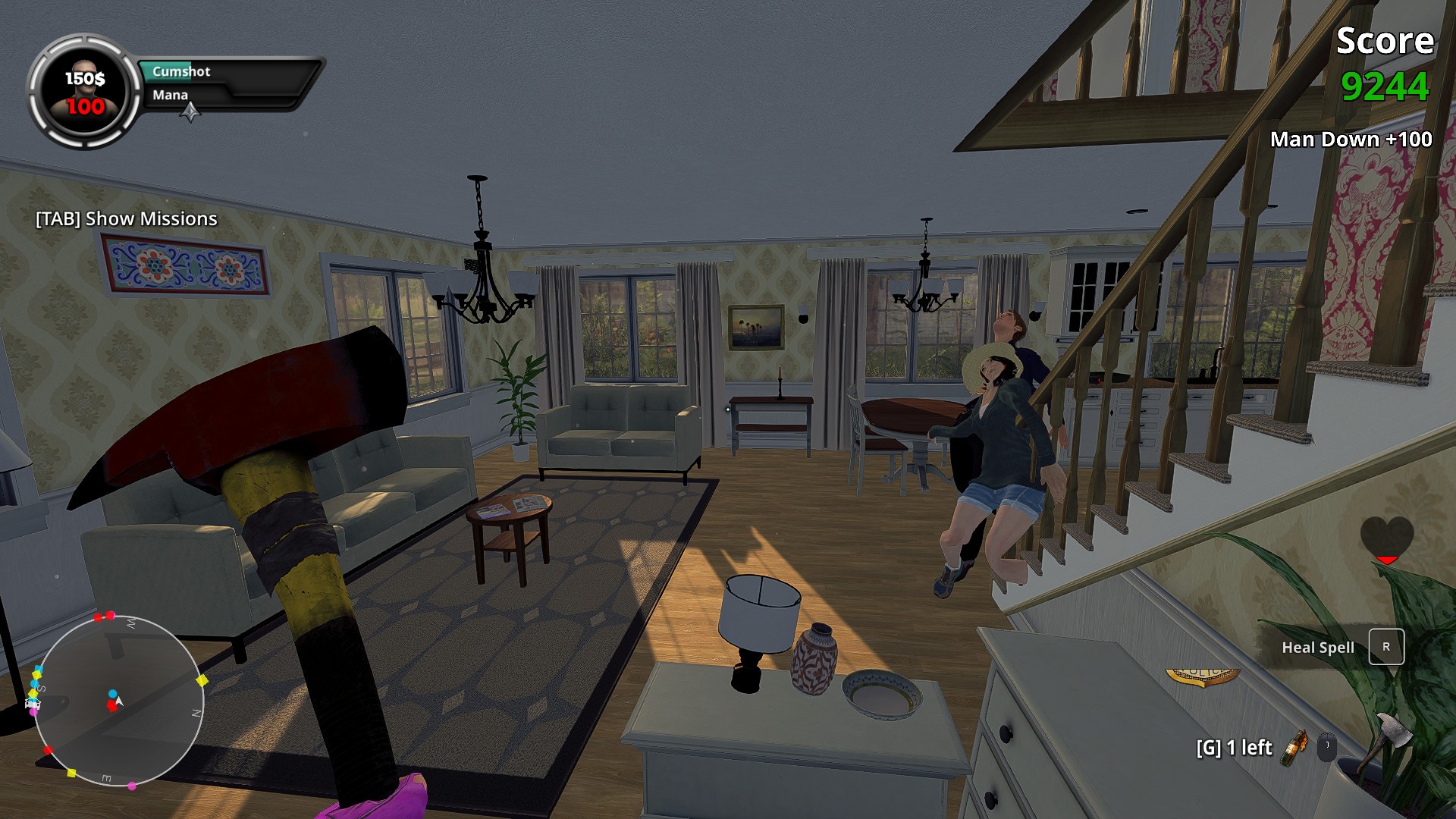 I’ve already touched upon the fact that this is an alpha demo, and so I really don’t want to be too harsh, but I have to say if it carries on its current path then I see its appeal being limited to a very niche market. With very glitchy graphics, slow to respond controls, and with confusing yet almost impossible gameplay, it’s going to stall before it gets a chance to get going. Let me expand on those points mentioned.

The graphics, though dated and a bit rough aren’t actually too bad, and I’d say they are ahead of where you’d expect them to be, the character models are quite varied, and are unusual to look at, prime example of this; a burly guy wearing a purple flowery dress just marching around the village. The colours used are bright and crisp, and the world is easy to navigate. Unfortunately, though the characters themselves are varied, the developers haven’t designed enough of them, so when it all kicks off, and it does quite regularly, you happen to see at least a handful of triplets running at you. If you put aside the NPC limitations, the one area I couldn’t see past was bodies clipping, merging and elastic banding around the walls, and in cars. It really was poor, and needs addressing pretty quickly.

The gameplay and its difficulty are odd as heck, a quest will be completed, but without warning it will add another element to it, such as defeat the rampant crowd. By the time you understand this you have been killed and all your progress is wiped, it was unnecessarily frustrating. To compound the issue further, NPC’s will spawn out of nowhere and start attacking you. The villagers clearly have an issue with a man in his pants bashing one off, and well who wouldn’t? 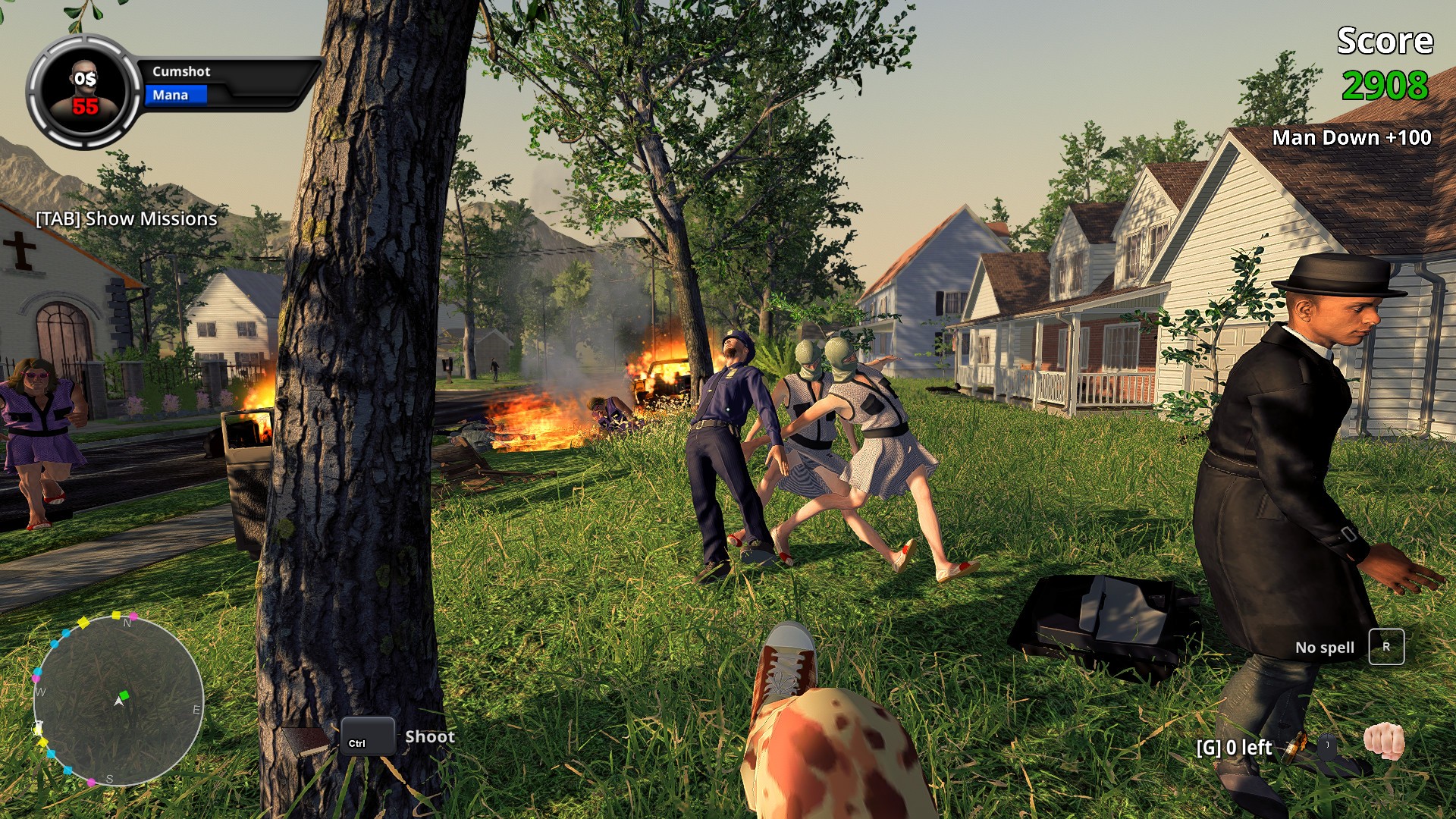 The controls were great and terrible in equal measures. A very simple setup allows you to start annoying the village folk almost immediately, the negative was that the controls were very slow to respond, there was an awful lot of button bashing for very little outcome.

The audio is limited at best, music at the moment is restricted to the opening menu, where the odd man is gyrating in a provocative manner. The sound effects are mainly the noise of beating people up, and beating one off. A minimalist approach that is strangely very effective.

I should have guessed that when a games primary focus is on a male pleasuring himself, they wouldn’t take the mature high road, but would play to the obvious elements throughout. The Wanking Simulator really does slide through the mud on its belly with its credibility. Its ability to keep its humour around the smutty and crude toilet level gets old very quickly. With few high points to talk about the developers unfortunately have a lot to work on, to get this mess up to a standard that would be considered acceptable in today’s market.

I’m not going to write this game off just yet, and the review has me coming off as some sort of prude, I’m really not. I like toilet humour as much as the next person, I just also like my comedy to be somewhat intelligent, and not thrust upon me like the man dancing in his pants in the menu screen. With so many great and whacky games on the market, I can see what the development team is trying to achieve, I just think that they are way off the mark at the moment, and they seriously need to address some obvious faults, before continuing to develop their game.