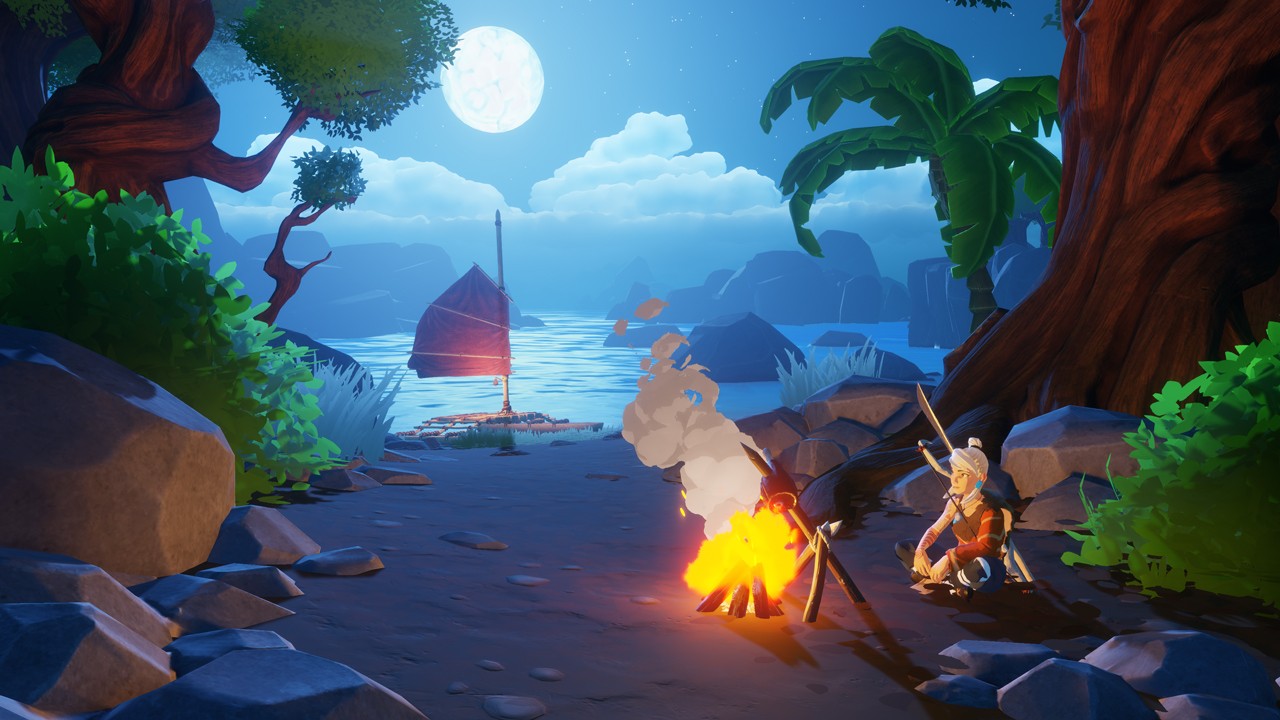 I don’t exactly remember when I first saw Windbound, but I immediately knew that I had to play it. It is a survival game focusing strongly on crafting, but the game has a bit more to it than just that. It’s also not often that you see such a visually appealing game in this genre, and I’d be lying if I said that didn’t play a role in triggering my interest. In any case, both the visual and sound presentation of Windbound is spot on, but how exactly is the game itself?

We’ve already established that it is a survival game with an emphasis on crafting, but the game is as much about that as it’s about exploration. It tells the tale of Kara, a warrior that found itself stranded and separated from the rest of her people during a sea storm after her raft was wrecked. As an aftermath, you see yourself alone, with little in your possession, and lost somewhere in the Forbidden Islands. It’s then your task to find your way back to your tribe, assuming that they’ve survived the storm, while also exploring the ocean and nearby islands for any clues that might help you solve the mystery surrounding the world of Windbound.

The game comprises several chapters where you have to find and activate three artefacts in order to progress. In each of these chapters, you will have to explore the ocean and visit a myriad of different islands, each with their own unique layout and biome. Although each island will often have much-needed resources, I didn’t find them particularly interesting to explore, other than for the first time you get to see a new biome, which there are only a handful of them. Still, I found that navigating the ocean was actually surprisingly captivating, but I’ve always been a sucker for sailing in games. It’s worth noting that the name of the game is quite apt, you are literally bound by the wind, when sailing between islands is nigh impossible to do if you happen to have the wind against you. Sailing in Windbound isn’t done in a simple fashion, you actually have to make sure that you have the wind on your side and that you raise, tighten or loosen your sails whenever necessary to gain proper momentum. 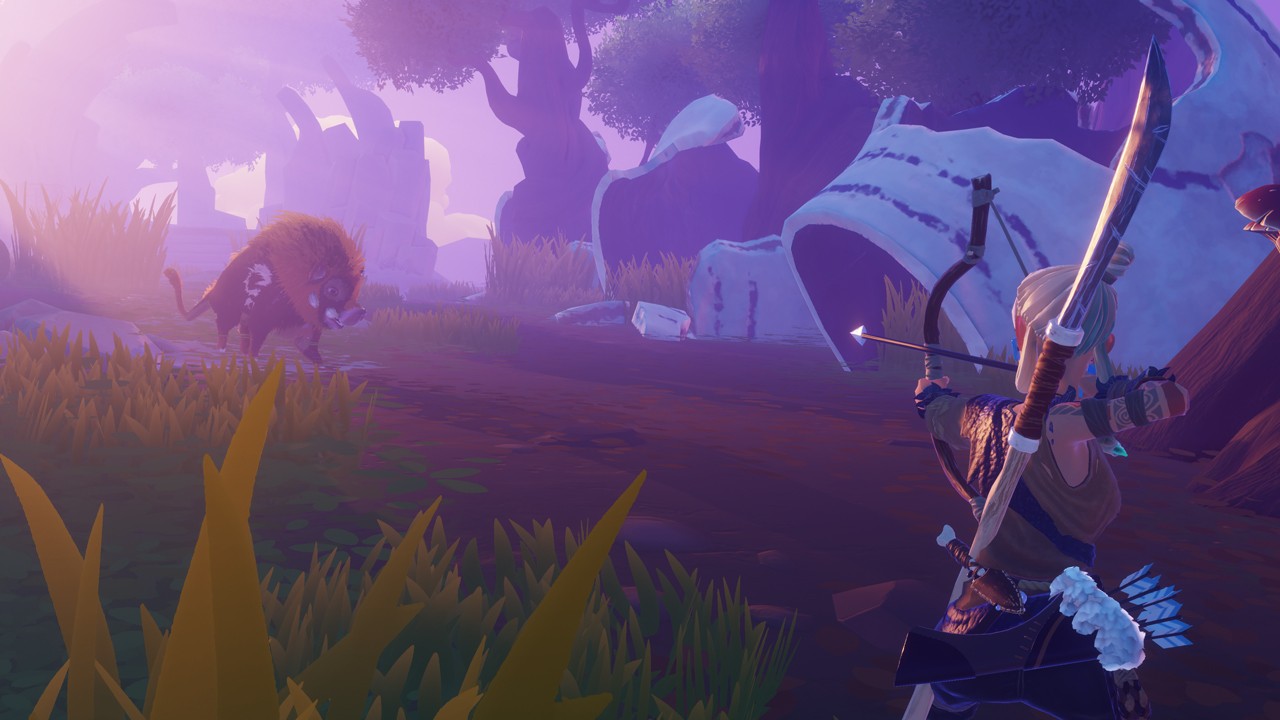 As you explore all the different islands, you will gradually find new resources which will allow you to craft better tools. You will not get very far if you just stick to your starting knife. There are various slingshots, bows and spears that you can learn how to craft, as well as specific tools such as an axe and a shovel that will allow you to extract certain resources from their corresponding nodes. Likewise, you can also build your own canoe or raft and upgrade them accordingly as you find those new resources. Your first raft or canoe might be made of just thick grass tied together, but later on, you can upgrade it to bamboo or wood, and even place containers on it so that you can store items whenever you go out and explore an island.

While there is certainly a fair bit of sailing, most of the game takes place on actual land. Given the fact that you’re limited in terms of inventory space, inventory management is also something that plays a big role in Windbound. It’s not only raw resources, tools and weapons that you carry with you, but also armour and food. Speaking of which, there is actually a food and tool degradation system in place, so you also have to plan your inventory capacity around that, as you need weapons to defend yourself and food to stave off hunger.

Since it requires you to hunt the local wildlife for food, it’s only appropriate that it features a decent enough combat system. Having said that, I must admit that I’m not a huge fan of it. Combat functions through a really wonky lock-on system where it makes it easier for you to dodge and hit enemies, but it also makes it hard to figure out which enemy you’re targeting if you happen to be fighting more than one and they just happen to be stacked. There were also a few occasions where enemies would get stuck on terrain while charging at me, which would let me land a few hits without risking my neck. With that said, I also found out that you can trick enemies to charge at you in some places and make it so that they can no longer move, they’re simply stuck on the terrain and they’re ripe for the taking.

Windbound actually offers two different modes for players to choose, and you can even change between them on the fly. There’s the Survivalist mode, which is how the developers have envisioned the game to be played, and then there’s the Storyteller mode, made for those who only want to experience the story without having to deal with a harsh punishment in the survival aspect. If you play on Survivalist and die, you will have to start over from the first chapter, but you’ll be able to retain some items that you had In your inventory. In contrast, in Storyteller you don’t lose chapter progress and you get to keep your entire inventory. 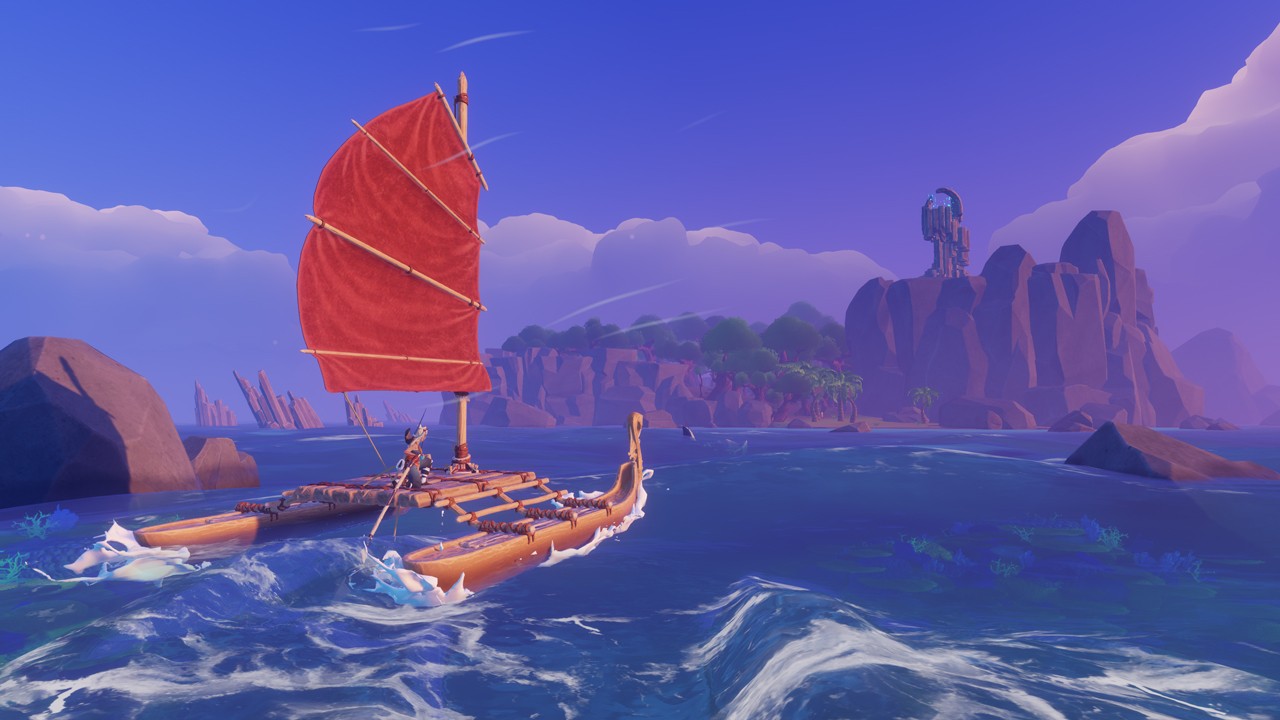 Although the game is pretty open and allows players to approach each area’s islands in any way and order that they see fit, once you finish a chapter you’re thrown into a much more linear section. In these sections, you undergo a rite of passage to the next chapter where your sailing skills will be tested. At the end of these rites, you will be able to make offerings and acquire blessings in return. Although you can unlock many of these blessings, you can only have a limited amount of them activated at any given time, so you can pick the one which you think you’ll benefit the most from. For example, there is a blessing which increases your inventory space and there’s another which gives you an unbreakable spear. Depending on your journey up until that point, or depending on if you’re someone who likes to collect everything you see or kill every single critter, you might prefer to choose one blessing over the other.

Now, at the end of the day, while a part of me sometimes felt that the whole time spent sailing from one island to the other was just a way to increase the gameplay time extensively, another part of me thought it was actually pretty relaxing. Windbound also tells a nice story, but it doesn’t shove it down your throat, it’s very mysterious about it initially, leaving most of it to the player to figure out through clues in the environment and small snippets of information during each rite of passage. It took me about 8 hours to beat the game and I only died once, but thankfully it was in the second chapter, so I didn’t lose much progress.

Windbound is certainly a game for both those that want a challenging, but not impossible, survival game, as well as those who are just looking for something more focused on the exploration and environmental storytelling. Thanks to the two different difficulty modes and the ability to change between them on the fly, both experiences can coexist and thus make the game more appealing to a broader audience. Like I’ve said, I’m not particularly a fan of the combat and I think that the island exploration could’ve been more rewarding, but overall, it feels like a pretty polished experience that doesn’t overstay its welcome.

Windbound is a survival game with a strong focus on crafting, environmental storytelling and exploration mostly through sailing.