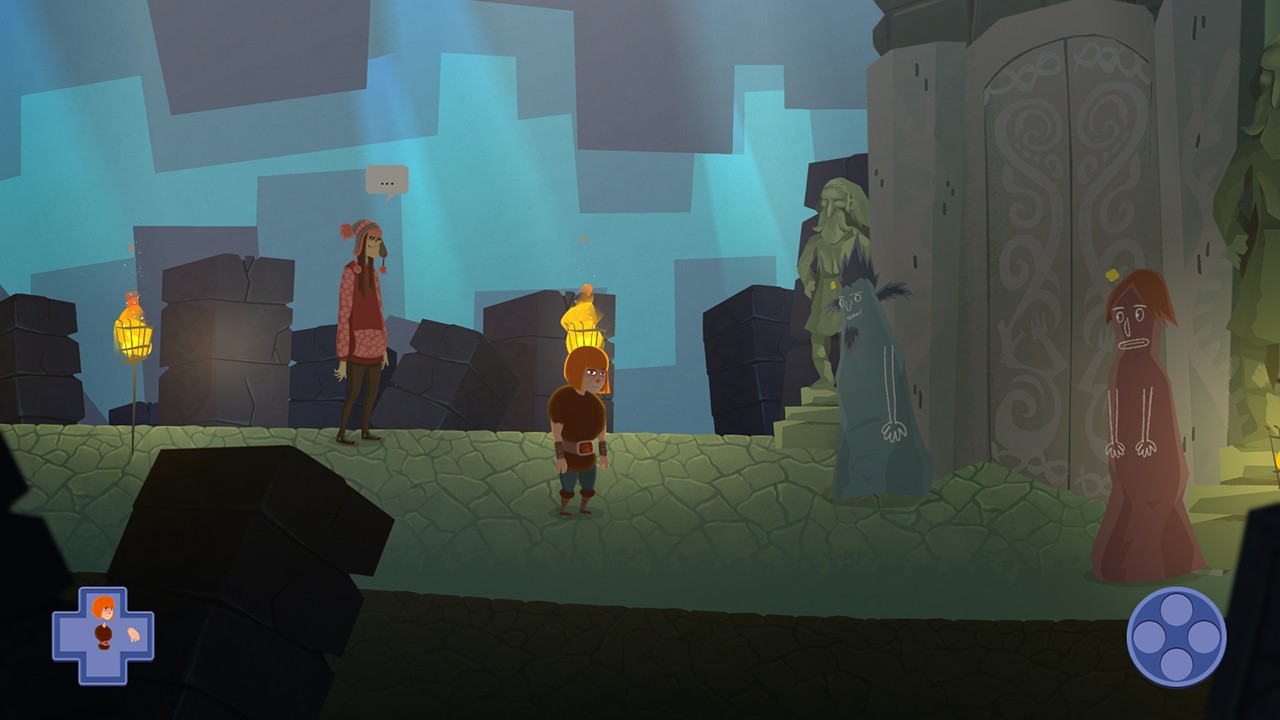 Ah, death. Why are all the games I’m writing about recently regarding death? We got Evergate, we got basically each visual novel (which involves someone, somehow, dying horrifically), and so on and so forth. I guess it’s because death is that thing we all share, or will share, eventually, and it’s still something we’re not totally certain about. Of course, people will tell you about one life to live, there’s no afterlife, etc. etc., but those people are either wet blankets at parties or, worse, they’re the psychos at parties trying to do a kegstand in a wagon while going down a ramp. Every set of people in the history of civilization has come up with some ideas about what happens when we die, and the Norsefolk of yore, the Vikings, had some pretty grand ideas. They figured that, if you were awesome, you would go to Valhalla, where you got to fight and feast and bang Valkyries for all eternity. If you were lame or a wimp, you went to Hel, or Helheim, where you…actually, where you just sort of hung about. It wasn’t a punishment or whatever; it was just the default prize for dying without being hardcore whilst alive.

In Helheim Hassle, an adventure game with interesting mechanics and a fantastic story, you play Bjørn, a pacifist who was alive in the time of the Vikings and genuinely, sincerely did not want to be one. In an effort to run away from a massive, sure-to-kill-everyone battle, Bjørn accidentally falls to his death, killing a bear in the process, and is mistaken for a gnarly hero who died fighting a bear, and thus gets whisked away to Valhalla (despite some feeble protests). After several centuries of that, his remains are discovered by Pesto, a skeleton who is running an errand for an unseen boss, and needs to get through the gates of Hel to pick up something. Bjørn agrees to help Pesto in exchange for getting him into Helheim and away from the nonstop party that is Valhalla. Because we just want to relax for eternity, you know? Unfortunately, the way Pesto resurrected Bjørn leaves something to be desired, as Bjørn is now coming apart at the seems, quite literally, and needs to pull himself together (again, literally) in order to help out and get the afterlife he so richly deserves. 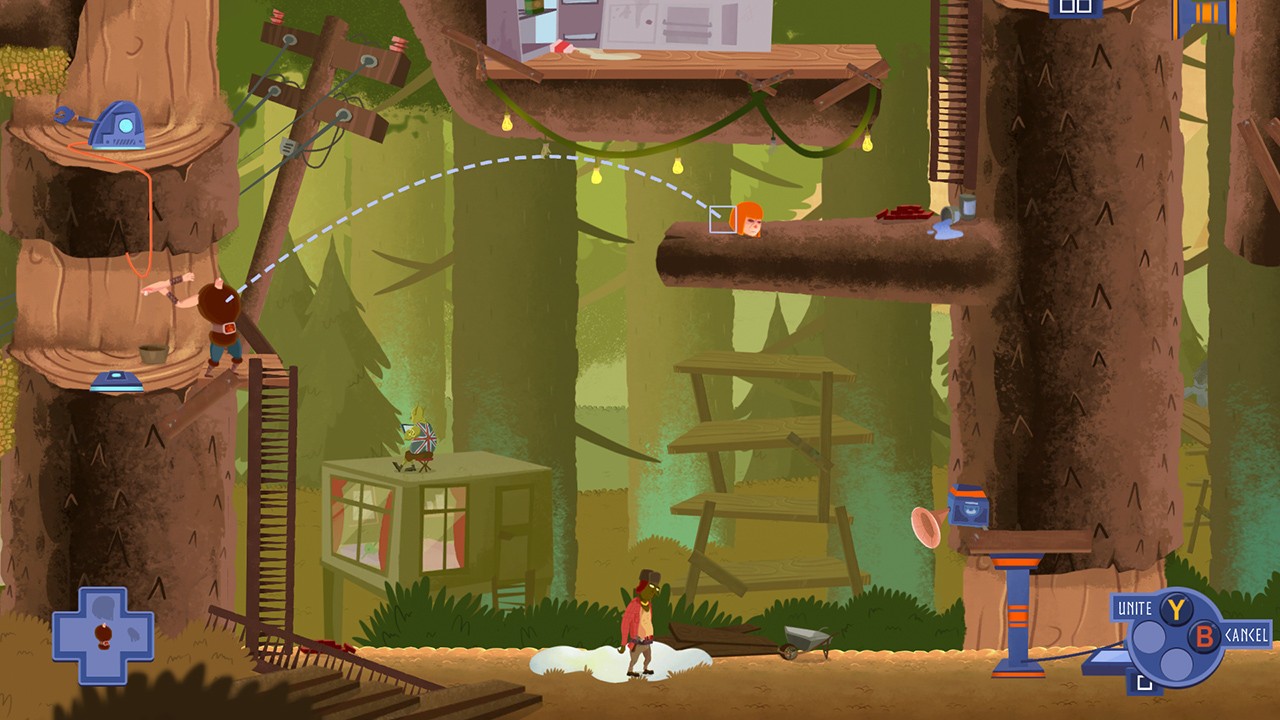 Perfectly Paranormal has already tackled the subject of death with a grin once before with their previous title, Manual Samuel, a game that I had a blast with due to the irreverent nature and interesting mechanics of keeping Sam from dying in the process of living. Helheim Hassle is in a similar vein of unabashedly comical storytelling and bizarre mechanics. As you play more, Bjørn releases more and more of his limbs, until he’s able to disconnect all major appendages and his head, and you can, effectively, toggle through each of these to do different actions and interactions as best you can. Naturally, in order to move forward, Bjørn needs to be complete before opening the next chapter, so you can’t just leave your arm behind and be done with it. No matter how insignificant you consider your left leg to be, it’s a part of you and needs to rejoin the torso (along with everything else) in order to move onward.

As you move forward through Helheim Hassle, Bjørn gets to interact with a wide, incredibly eclectic series of characters, ranging from those who are clearly rooted in Norse mythology (the introduction of Odin at the beginning is simply amazing in tone), to those who are just sort of….there. Pesto is clearly a stooge for Satan, and it’s been established that the universes are connected (and even happen on the same Tuesday). Each character is purposely amped up to the nines, taking already incredibly caricaturized personalities and revving it even higher with Perfectly Paranomal’s own brand of humour. From a little girl who calls you “dawg” longing for sweet death to Anthony, the vested dude who doesn’t take “I’m not a bear slayer” for an answer. I actually wish that there was a layout of the voice work that had been done, because it’s just so damn good from character to character. Perfectly Paranormal really is one of those fantastic teams who care about how characters sound, even the minor ones, and the deliveries are what make the whole experience work. I genuinely laughed aloud when a goblin announced “time to go insane or die trying!” while hurling a molotov…in response to a bartender passing out.

Puzzle-wise and gameplay wise, Helheim Hassle is quite interesting in the balance and understanding of Bjørn’s unique abilities. In the beginning, it feels more like a means-to-an-end. Rather than just have you coast forward and make things easier, the way is purposely obtuse, but not improbable, to figure out naturally. One of the first puzzles you finish ends up being a loop that could have easily been accomplished if the way had been clearer: Pesto even comments on this fact, letting the players in on a little joke about the entire ordeal. However, as you move further and further forward (and more of your limbs become independent), the excitement of controlling different body parts takes on a fresh life. That bartender quip I mentioned earlier? That happens when your body is literally separated across several rooms, and you need to toggle the camera to totally different areas in order to assess and figure out what to do next on a piece-by-piece basis. As it’s impossible (from what I saw) to end up in a fail state of the game, every puzzle is a test of patience and natural understanding of how things are supposed to go. Then, seeing how the different limbs can interact WITH each other – carrying a leg in your teeth as your free rolling head, throwing your head with a loose arm for maximum exploration – it all starts to get incredibly fun and, well, goofy. 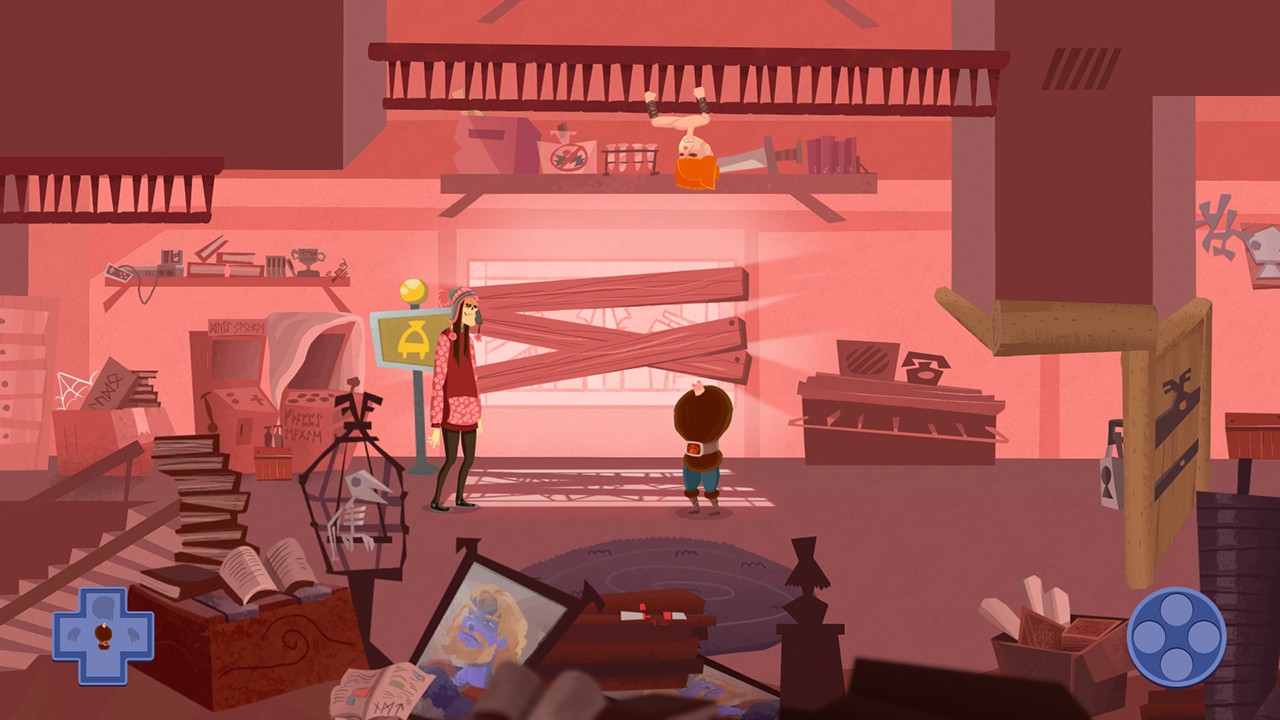 Even though the entire scope of the project becomes complex and really out-of-the-box demanding, Helheim Hassle never hits a point of frustration. Not only do you not spend excessive amounts of time with a singular puzzle or goal to explore, every moment is broken up with story points, all of which hit the right rhythms and beats, giving personalities and fantastic turns to the world of Bjørn at large. Seeing the Allfather done up like a hipster, hearing the weird side plots that Balder is exploring, meeting two crows who sound like they’re from the movie Strange Brew…it’s fantastic. It’s like watching a really great adult cartoon that then intermixes moments of interactivity in order to craft the best overall life. I love games that make you want to explore the world and the story because it shows what video games have become. Why, it’s no longer either a matter of arcade-style play with zero purpose or an overly dramatic, massive time investment to tell a tale that rivals the works of Joyce. We have this wonderfully interesting, positively mesmerizing story with villains, heroes, comic relief and offbeat moments that punch through the fourth wall and upset traditional expectations merely because it’s what the devs wanted to make, and I am HERE for it.

While the story is a bit short in the overall, Helheim Hassle is enjoyable from start to finish, and will definitely be revisited in the future once my initial impression has relaxed and I can take another swing at it. After all, will I find it as funny in a few years time? Will Famine still be the most outlandish character simply because he’s trying to do his job properly, with the proper gravitas? Is spotting and cheering on trolls in the gym still a brilliant way to exercise physics puzzles? While the future is a ways away, I can say, in the here and now, that Helheim Hassle is positively, utterly fantastic, and I recommend to anyone and everyone.

Helheim Hassle: because trying to find your place in the Afterlife can make anyone fall to pieces.