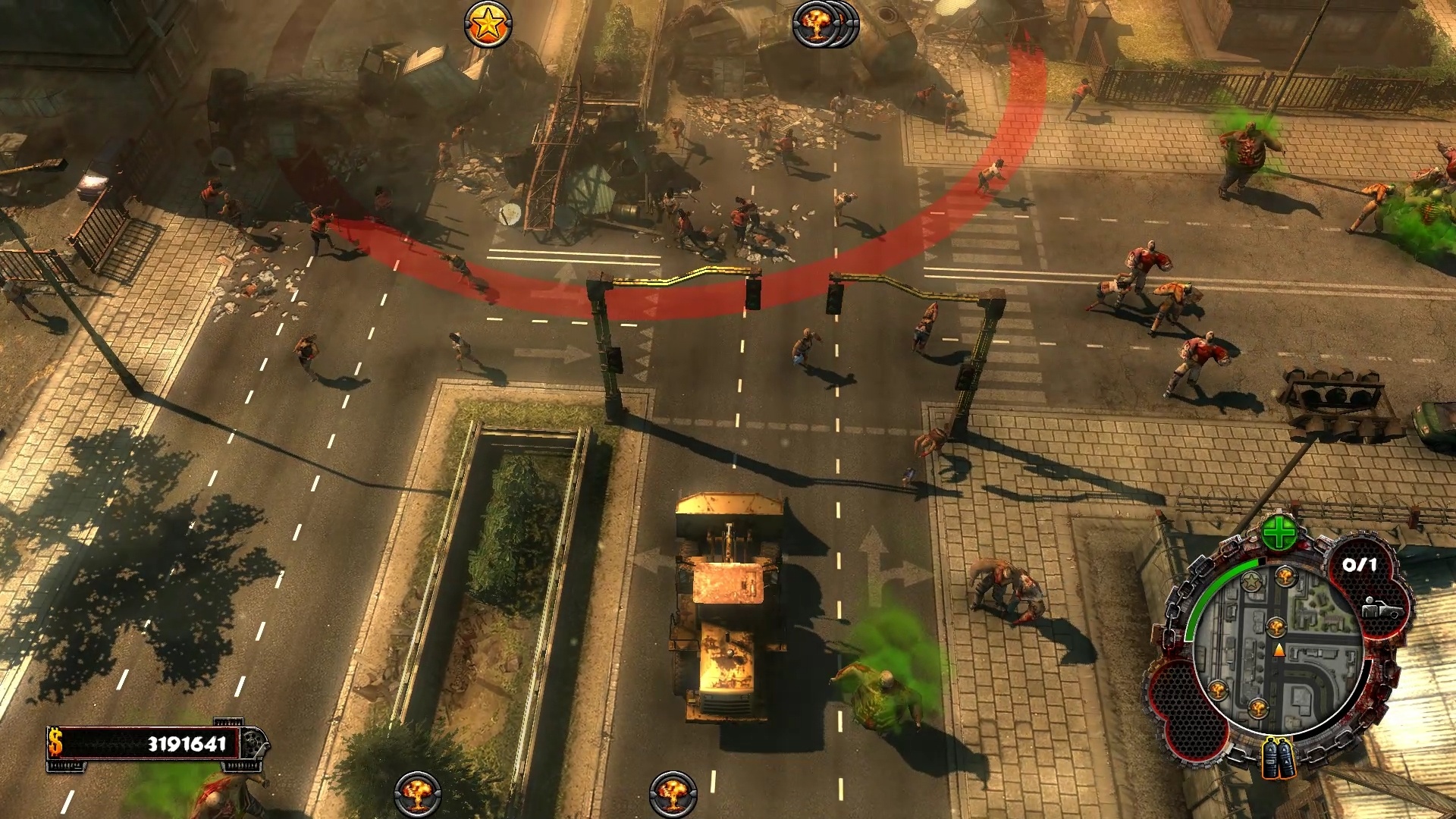 Zombie Driver: Immortal Edition is like a revamped Spyhunter (the arcade version) and written by straight-to-video action B-Movie writers (the avatars of the NPCs you rescue along the way resemble many stars too, unofficial, of course). In the game, you aren’t a zombie, but you are a driver, and drive through zombies you must. If you’re a fan of gore and exterior design with the palette of red, you’ll be jumping, or driving for joy in this onslaught of zombie mowing.

It’s the near future, and some unfortunate incident has caused a rise in undead numbers. As the best driver in town, you go about rescuing the survivors by running down everything in sight (inanimate objects too) or blasting them with a selection of flamethrowers and machine guns not to be sneezed at. In a bird-eye perspective, you hoon around each level completing a series of missions and sub-quests from eliminating a targeted amount of the undead to rescuing a bunch of people shacked up in an abandoned building or two. Enemies continuously respawn – including some of the main objectives when you’re trying to cut them down, so driving through everything isn’t enough: you have to mix and match your driving skills and upgrade your vehicles for offensive and defensive manoeuvres.

Completing side quests will award cash, and it’s also in abundance throughout the maps along with power-ups so it’s advisable to pick up everything you can then upgrade your vehicle from your base. Aside from the weapon upgrades, you can improve on your armour and get some nitrous oxide for darting through waves of zombies. Other than the individual upgrades, you can unlock new vehicles, each with their bonuses from durability to speed. I kept with the starting taxi for some time as I wasn’t impressed with the flimsy sports car. Speed is great to reach your objective, but like Dead Rising, something is appealing about driving through endless waves of zombies – even if at the detriment of your vehicle (heath upgrades are scattered all over the place and respawn). 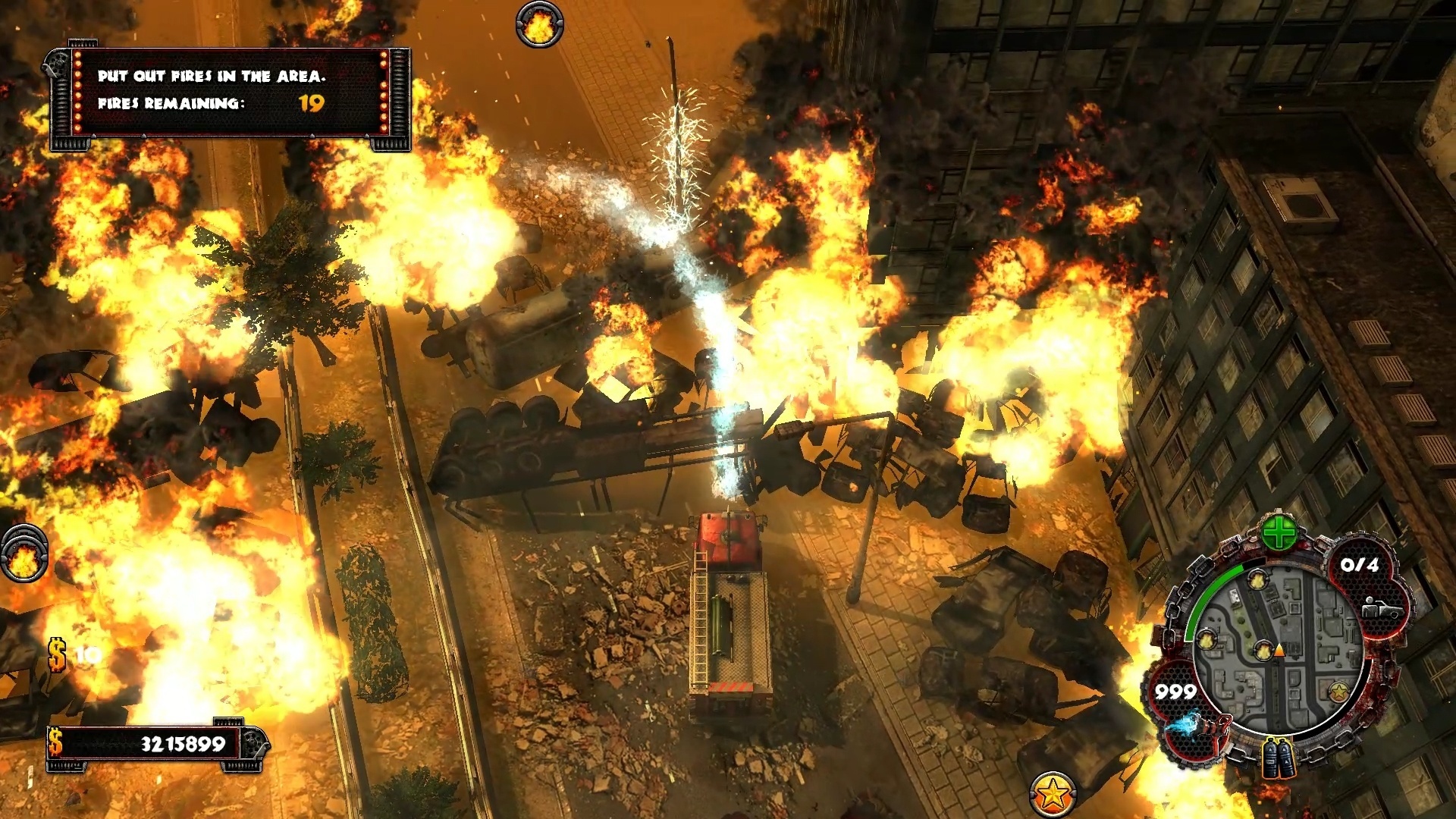 The zombies are mostly fish in a barrel when it comes to destruction, but their sheer numbers can overwhelm, and sometimes you have to juggle having a fairly sturdy car, yet agile enough to get out of trouble and look for health points. But no zombie apocalypse is complete without boss fights, and there are numerous oversized, unexplainable T-virus-like creatures that you need to destroy where ramming them won’t suffice.

Unfortunately, relying on your weapons is a given, and you can’t target things without driving at them. For lesser enemies, you might as well drive over them, but for the bosses, you have to line up and reverse back and forth in an attempt to evade their attacks. My first strategy of attack and run (to get health) didn’t pay off as each time I returned; the boss has regenerated full health. Zombie Driver: Immortal Edition, while fun, is a challenging game.

There are two games in one here, as outside of the story mode is the Blood Race. It’s an excellent way to unlock new vehicles, but in principle, this is the racer side of the game offering a standard race, Eliminator/deathmatch and Endurance option. It’s a familiar setup really that buffs out a relatively simple game, but as with most simple configurations, it’s enjoyable and pretty addictive – if repetitive. The upgrade system has to be the standout, though, as each stage gets tougher and tougher, borderline overwhelming if you don’t upgrade. However, grind it out long enough, and you’ll be able to unlock rocket launchers and railguns and vehicles such as the bulldozer which, sluggish as it is, does the job by bashing through the baddies while retaining enough health to survive. Of course, you could simply stick with something a little more subtle and play through the Blood Race to earn hard cash to improve it. 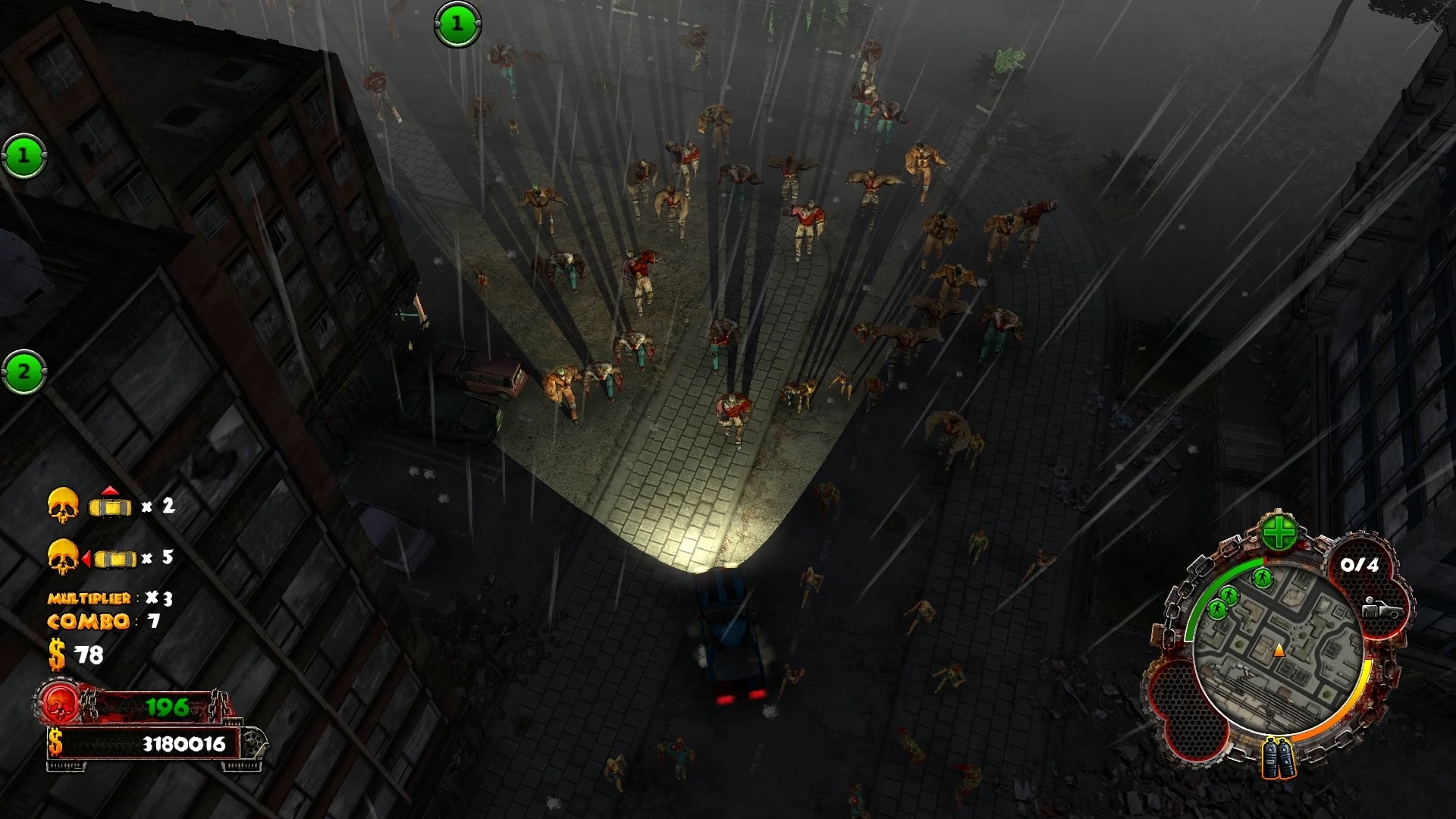 In this Immortal Edition is also the Slaughter mode – an endless survival of sorts, the twist being to survive the infinite amount of zombies heading your way while continually moving, collecting health and power-ups. To say that the screen is filled with hundreds – if not thousands of zombies is an understatement and will satisfy most with blood lust and a fan of driving games that in some way resemble the original GTA series (only you can’t get out of the car – why would you want to?!). Overall, it’s feature-packed with upgrades, game modes, Leaderboards and quirky B-Movie characters to keep you going, and legend has it that purchasing this game will allow playback on the PS3 and PS5, once it’s released. Expect to see this game on the circuit for some time to come.

Best played in short doses, mostly because it’s repetitive, Zombie Driver: Immortal Edition is a fun game, and its replay value comes through the number of upgrades on offer and the variety of modes. The graphics are pretty good, but you pay little attention other than to the bosses as everything is pretty small on screen, but it needs to be as the main play area can be covered pretty quickly with the right vehicle. Worth playing if you’re a fan of top-down driving games with a blend of typical deathmatch racing and plenty of customisations.

Not a brand new game, but perfectly current based on it’s pick up and play gameplay, Zombie Driver: Immortal Edition is an enjoyable destructive racer with upgrades galore and a joy for gore fans!