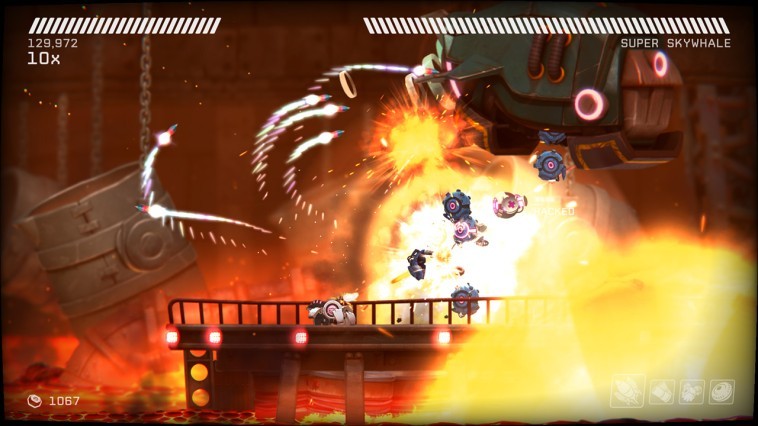 Sometimes a game just needs to really express itself through any medium or message possible. There are games that want to tell you a divine story, or let you know about the deeper levels of the human soul, or even just want to remind you that people care, and you’re cared about. Some games want to help warn about the dangers of addiction, and that games can be a vessel to make people aware of problems they might not normally come across, but shining light on it could help someone else. These are games with a purpose, and they’re admirable, if sometimes a bit preachy. RIVE’s message to players and, nay, to humanity at large is clear: thing’s gonna ‘splode.

RIVE puts you in the shoes of Roughshot, a space mercenary who’s out in space because shut up. There’s a plot, and a reason, and all that jazz, but even the game itself feels like it’s too antsy to actually care about most of it. Roughshot himself is mildly surprised to find out that he’s landed his mech suit inside of some kind of space factory, but is otherwise nonplussed because he’s just trying to get some cash. I do like the sudden upswing of games giving glory to mercenaries, simply because their stories are the easiest for someone to digest: they do what they do for money. Much like Greedy Guns, any sort of nobility or quest for knowledge is really given the back seat to your character attempting to amass as much cash as possible. Please note that I don’t glorify murder for hire, or some insane logical reach, I just like games that sometimes boil down the plot to “because money,” since that’s incredibly easy to digest.

Once you get through some initial moments in zero gravity, RIVE shows that you’re doing a sidescrolling platformer, with a heavy emphasis on three points: exploration, explosion and exposition. Roughshot will comment on nearly everything, usually sarcastically, while you’re also actively trying to blow it to bits. You don’t have a lot of friends aboard this ship: if it moves, you wouldn’t be wrong to shoot it. If it doesn’t deserve to be shot, it’ll either throw up shields or simply respawn. Hint: only one robot keeps respawning, and it’s the one that explains a bit about what’s happening to Roughshot and where he is (not that Roughshot really cares). 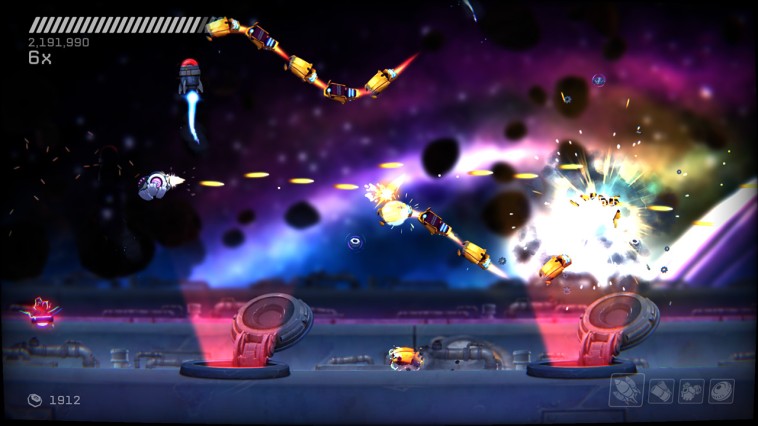 As for the explosion aspect, this is where RIVE finds its groove and really stays there, almost to the point of being in a rut. You have 360 degrees of firing power, unlimited normal ammunition, and the drops from enemies are borderline insane with their frequency and graciousness. RIVE is a type of game where you basically leave the trigger pulled as long as you possibly can, literally only relenting to fire one of your alternative weapons, like the multi-missile shot or the super-kaboomy rounds. The explosions are pretty spectacular, but not gratuitous, and so you can enjoy a certain level of mayhem without becoming too distracted. You may also stop shooting long enough to use a special “hack” beam that lets you take over certain robots to work for you. Although you find a good number of offensive robots with bullets and missiles and such, I never did enjoy getting anything quite as much as the nurse ‘bot. Having a portable heal kit that keeps you alive was might useful.

However, inside this dark and surprisingly beautiful landscape is the harsh truth that RIVE is a HARD game. This isn’t quite to the levels of Butcher in terms of relentless assassination, but RIVE has no problem throwing neverending waves of enemies at you in an attempt to ruin your day. Most if not all of the boss fights are contingent on the game throwing everything at you at once, from the boss itself to enemies coming from all directions PLUS environmental hazards. From sweeping laser fields to pockets of ballooning lava, it becomes clear that this game is not your friend and doesn’t not want to make things easy. If you feel that your ship is overpowered, then you haven’t gotten far enough in the game. RIVE constantly checks your ego with perils that aren’t unfair, but certainly aren’t something to grapple with nonchalantly.

Now, with all this, it becomes clear that RIVE caters to a certain demographic. The exploration aspect isn’t as grand as your average adventure game, as most of it is linear with a couple of sidesteps to find pockets of loot or an upgrade shop. As a result, the replay value of RIVE comes almost entirely in the additional options that unlock after the first mission and compound each subsequent mission. Doing score attacks on the main story are fine and dandy, but I did enjoy the challenges as they added a certain arcade flavor to it all. And, for fans of absolute nonstop bullets, there’s the battle arena to try and shoot as much as possible. This can be fun, but be warned that it’s something for fans who are totally invested in the game style. If you were hoping for anything more than survival, then you’ll be sorely disappointed. 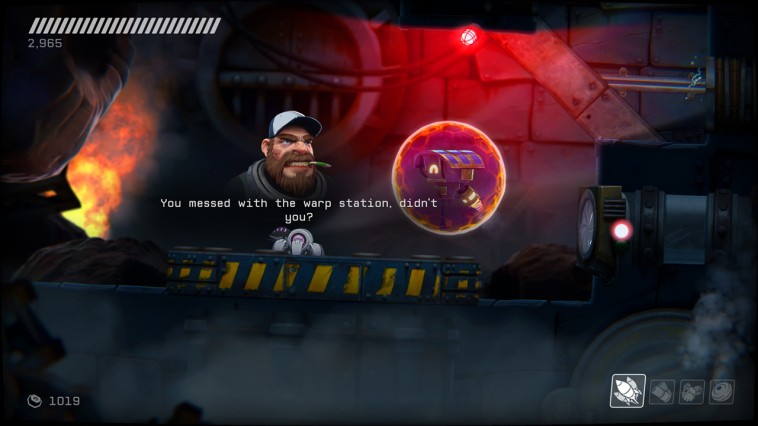 Lastly, I appreciate the developers adding something a little extra to RIVE for the Nintendo Switch and, at first, I was a bit disappointed that it was merely a co-op option. Both similar and different to Octodad, RIVE allows for one player to pilot the ship while the other uses the heavy artillery. However, rather than create further confusion, dividing the two options between two people really helps the flow and success rate of RIVE. For some reason, since there’s a nonstop onslaught of creatures for most of the game, you don’t really need to communicate in this mode. One player understands their purpose is to stay alive by running, jumping and grabbing drops. The other knows they gotta shoot every living thing that pops up. It actually felt very akin to a successful dogfight simulation, but 2D and in space and with aliens. Ok, so I guess not like a dogfight, but it was the most satisfying blend of two players for one character that I’ve had in awhile. I highly recommend trying this mode if you get a chance.

RIVE is a fantastic game that doesn’t wear out its welcome, has a good amount of replay value and never loses its intention or charm throughout the arguably short playthrough. It’s a shame that so many people passed it over on Steam, because RIVE was one of my favorite finds from Humble Bundle so many months ago, but I’m glad to see it on the Nintendo Switch. Platform gunning fans will find a lot of humor and fanfare within, but the visual novel crowd may have a hard time identifying with literally anything in this game.