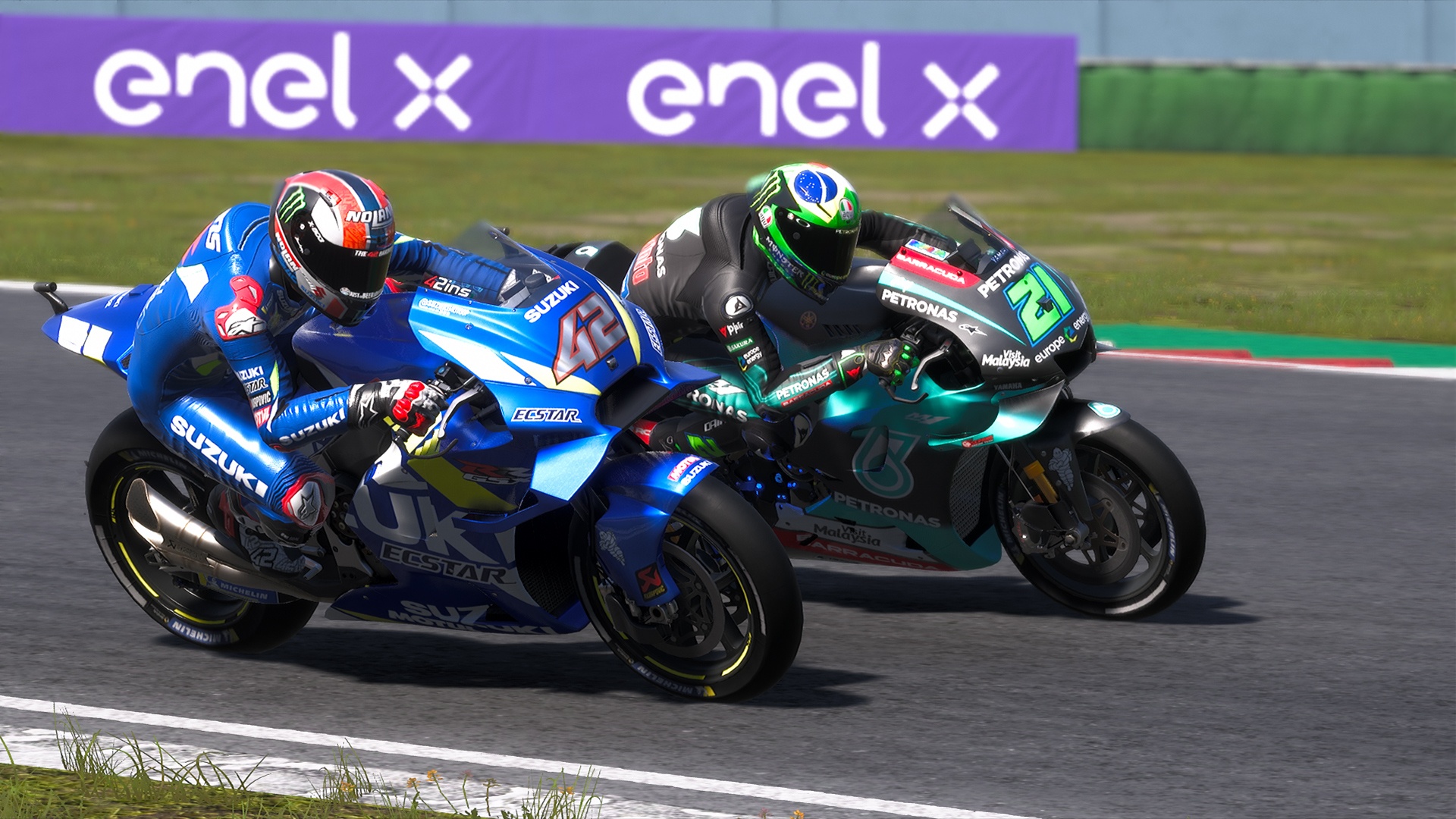 In truth, when it comes to racing on two wheels, whether it be off-road or blazing a trail along the asphalt courses of the world, the Nintendo Switch has been nothing more than a pillion passenger riding along a rather bumpy course. Despite a few releases to replicate the sport of motorcycling, the majority of them have ended feeling a bit deflated and missed that certain spark to ignite the exhausts of our entertainment. If I’m truly honest with you, I often find myself avoiding such titles, not because of sub-par review scores, but because I mainly suck at these types of games. However, when I was offered the chance to review the latest edition of Milestone’s motorcycle racing sim, I thought ‘why not’, after all, it’s probably about time I put on my leathers and learnt the art of motorcycle racing as MotoGP 19 wheelies a release onto the Nintendo Switch.

I’ve always looked at this series of games as the FIFA of the racing world. Not because of licenses or presentation, but because each year sees a new edition of the game; largely one that contains a few minor additions from the previous iteration. Last years release was the premiere for its series on the Switch and while it largely received a luke-warm reception, too many omissions and sacrifices brought it down a gear; much like EA’s stance on FIFA. However, Milestone s.r.l. have been working hard over the last twelve months to improve on last years offering and squeeze the most out of their engine to maximise as much content and performance as they could from Nintendo’s machine.

When it comes to these types of games, I think it’s always important to realise that the Switch is not a PS4 or Xbox One and never will be. It’s wrong to make comparisons between the Switch and its bigger brethren; after all, surely it would be like racing a Mini against a Ferrari. What is important here, is to try and appreciate what has been achieved and look at what has been put in to trying to reduce the gap between each of the consoles. The reasons for detailing this, is because, yes, the Switch version is inferior to the PS4 and Xbox titles, but that doesn’t necessarily make this an inferior game though and I’m pleased to report that, in fact, MotoGP 19 laps its competition to produce one of the most satisfying racers to burn a release on the Switch console. 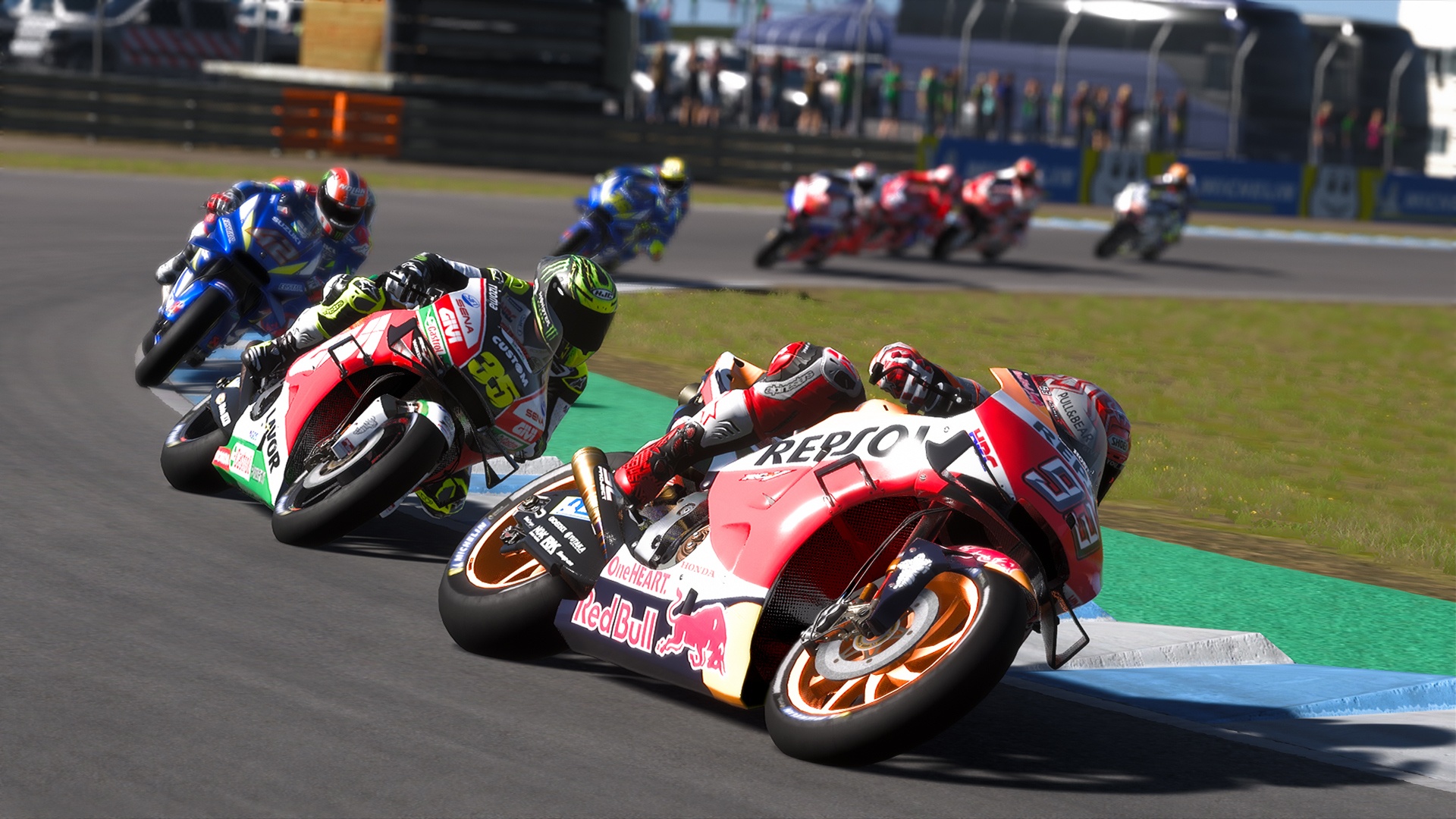 You can’t help but notice a downgrade in the graphical fidelity when compared to other versions. A slightly murky, or blurry palette and washed-out colouring are simply unavoidable to keep performance satisfactory, but in all honesty, if the switch is your only console, then it doesn’t detract from the overall experience of what this game is about. At the end of the day, this is a title that simulates the sport of motorcycle racing on a GP circuit and in terms of the playability of this premise, this is a game that simply burns rubber. Its content, technicalities and pure adrenaline-inducing racing simply overtake the competition of what else is available on the Switch; despite some minor downgrades and omissions in its presentation.

The game holds a few modes in which to play, the primary of these is a fully-fledged career mode where you create a rider, or choose from any 2019 championship racer and rise through the ranks from amateur to pro through a series of classes from the Red Bull MotoGP Rookies Cup through Moto2 and Moto3, up to the Moto GP and new for this season, MotoE. You can fully customise your rider, from gloves, boots and decals, through to designing your own helmet. You can even work with your pit crew to adjust bike performance to suit your style of riding. In fact, the level of customisation is simply astounding in this game, allowing you to adjust pretty much any element of the game to make it accessible for new players or returning pros.

Whatever series you race, the presentation of each class has been faithfully recreated and superbly done here, from TV style commentaries, changing weather conditions, behind the scenes pit interactions and umbrella-wielding models on the starting grid, there’s a nice level of realism to really submerse you into the world of motorsport racing. Each season follows a calendar that takes you to real-life locations and racing weekends that involve free practice, qualifying and race days. From the pits you can watch other riders’ lap times in real-time, before taking to the track to try and top the tables. It all adds to produce a real sense of immersion and involvement. However, where the game really shines is on the track itself and its competitive racing. 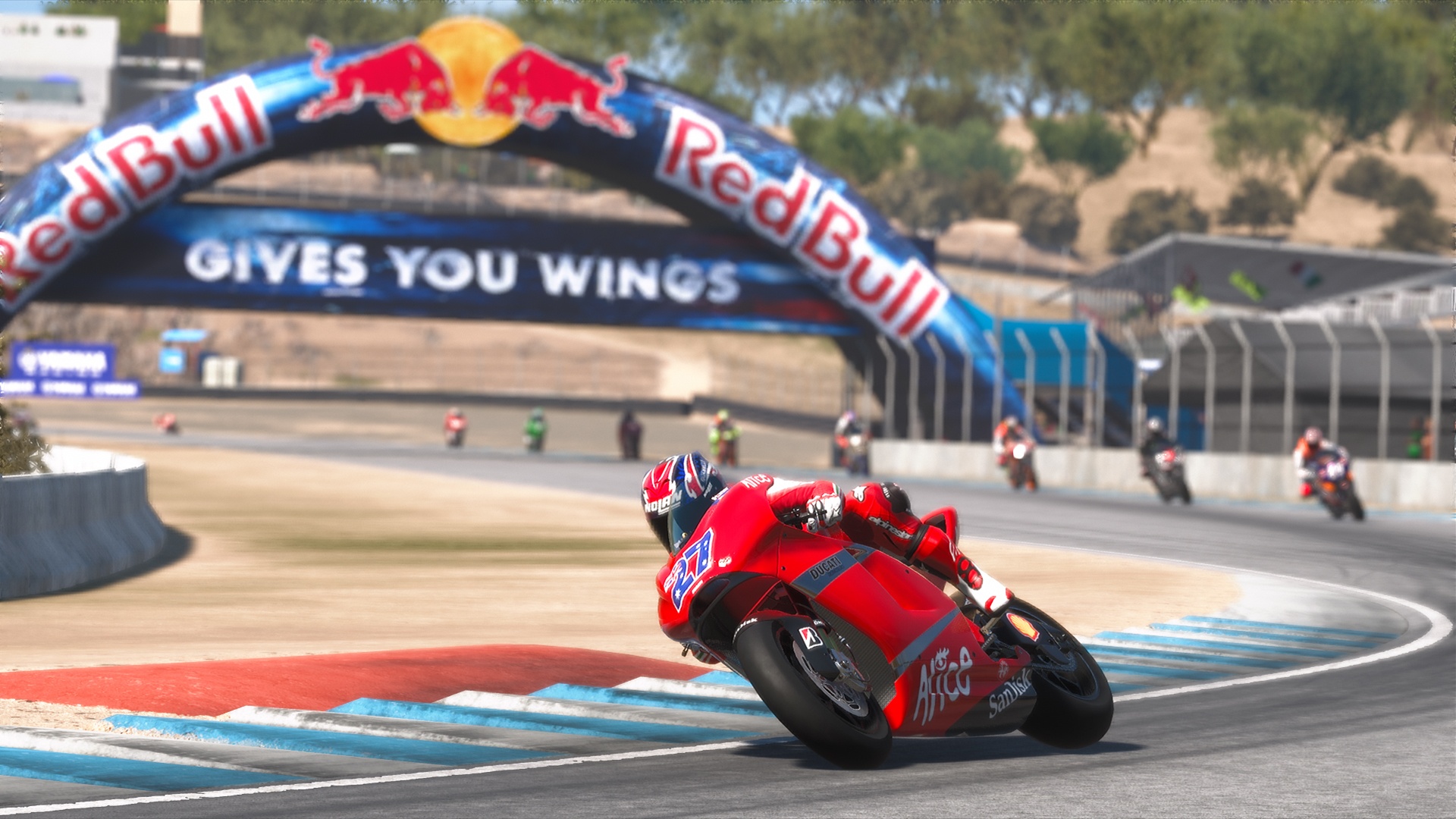 As with everything else within the game, the racing is fully customisable to suit your style of play, from race-line guides, braking assistance and even your posture when you lean the bike into bends. There’s a nice level of detail to each of the tracks, although they do lack some sharpness when compared to other versions, but as I said, that’s simply to be expected. However, it’s the mechanics and modelling of riding your bike that makes this game so playable. This is simply pure racing, and I mean that in its purest form. It sits nicely between the hardcore simulation and arcade styles, giving you level of degree in control that feels just right. You need to take the corners right, accelerate at the correct time and feather the brake to the point of losing control. Lose control or lose seconds from straying from the right line, and it’s simply your own fault for not controlling your bike in the right manner. Each of the bikes on offer feel distinctly different, with a real sense of weight that produces an exhilarating ride for any wannabe riders.

This latest version for the Switch even incorporates the new AI model introduced on other platforms, producing a field of competition, of up to twenty-four, that ride with an individuality and unpredictability that learns to adapt to the way you play. This produces an overall, more realistic feel to the racing and one that simply satisfies as you learn to become one with your mechanical beast. There’s a staggering amount of content here, this is definitely a game that will keep you engaged over the long-term. This years model also contains a series of historical challenges that sees you recreating past moments from the sport. Unfortunately, there’s no online multiplayer, which is sorely missed, but you can race locally for up to eight players; only as long as each of you own a copy of the game. Despite its omissions though, this is still a thoroughly engaging single-player experience.

Overall, MotoGP 19 is the best motorcycling racing simulation to date on the Nintendo Switch. Its content and presentation produce a very realistic and immersive world, but it’s the handling of the bikes that really shines though, producing a racing mechanic that just feels right. It creates a perfect balance in the fun of racing, but still relies on a level of concentration and work from you to produce a good deal of exhilaration. There’s plenty to get your teeth into, from the intricacies of fine-tuning your bike, rider and racing styles to game modes that covers careers and past moments within its history. Yes, online multiplayer would have made this great and some graphical presentations aren’t as sharp or detailed as other versions, but at the end of the day, this is a game that produces an exhilarating ride and near-perfection in the simulation of motorcycling racing and, for that alone, makes this the best of its kind upon Nintendo’s machine.

MotoGP 19 takes pole position to produce the finest motorcycle racing experience that you can have on the Nintendo Switch.