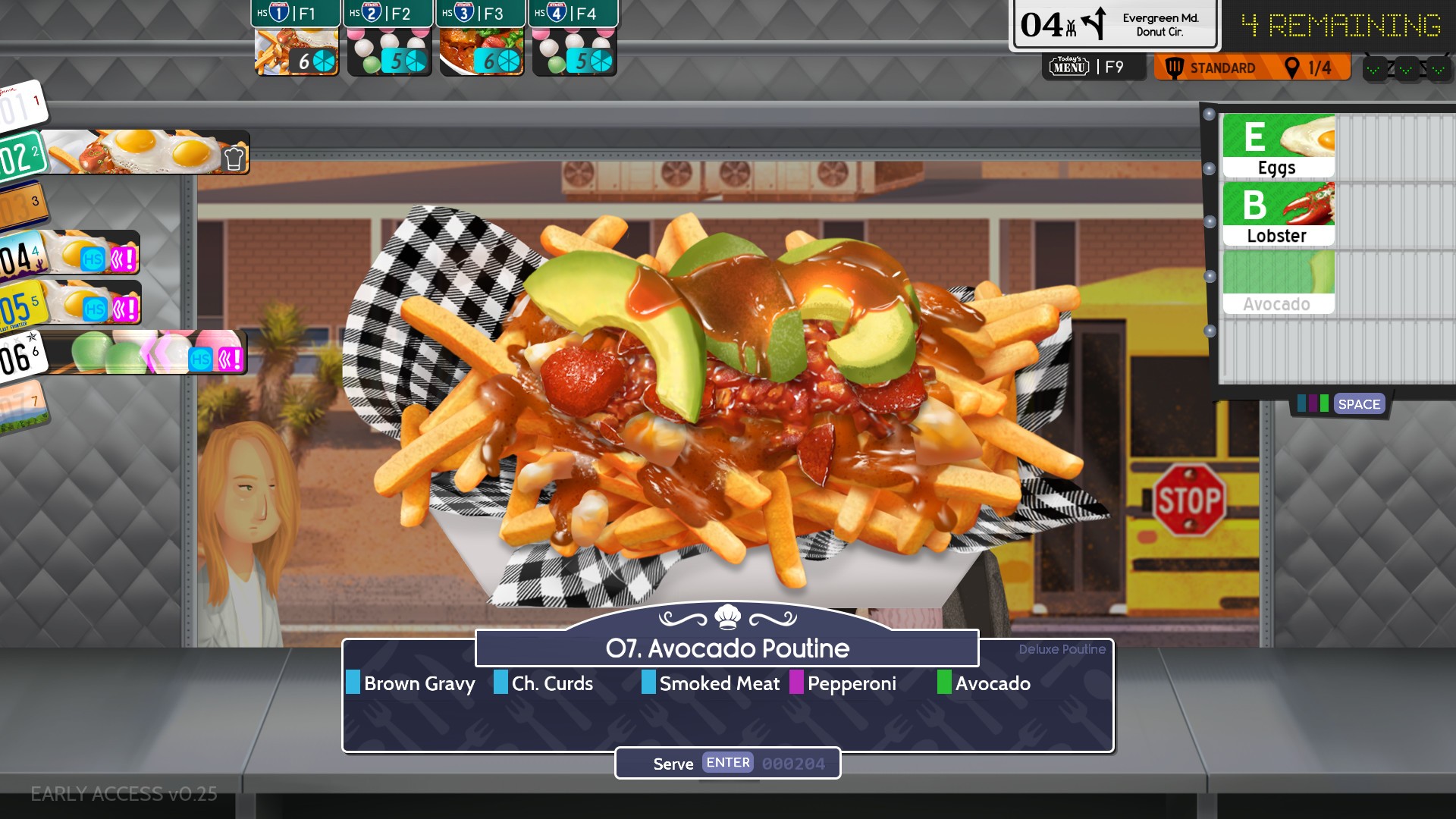 Virtual cooking games rarely make it as far as my gaming radar, let alone in my library. I’ve heard of the Cook, Serve, Delicious (CSD) franchise, but have never owned, or played one. That was until this last week. Cook, Serve, Delicious 3 follows on from where its predecessors have left off. You must run a restaurant fulfilling orders, while trying to keep all your hungry customers happy. Developed and published by Vertigo Games, you must keep your cool in this fast-paced and hectic food loving title.

CSD has received stellar reviews for each of its previous iterations, so I’m not surprised to see a third game making its way to the market. Having never played the previous titles, I had to rely heavily on information from the developers on how they have implemented changes to the game mechanics. From their list it was clear that they have made some routine performance changes, but also several wholesale alterations regarding many of the key gaming principles. These will be touched upon during this review, and what I can say from my experience is; the new ideas that have been introduced work particularly well, and the gameplay is smooth, and easy to understand.

So, what’s the point of this franchise then? CSD asks the player to run a food empire, where you must complete certain tasks, or hit minimum requirements to finish each stage. You are then given a score based on how you have faired, and will receive a reward according to how successful you have been. In CSD3 your restaurant has been blown up, you the chef was in the building and somehow you survived the aftermath. Two robots known as “Cleaver and Whisk” find you in the wreckage and rescue you. They instantly recognise who you are, and offer you the use of their vehicle so you can rebuild your world famous business.

This moving café forms the basis of all the new gameplay mechanics which have been implemented. Previously, you would face a rush hour where all your food must be served. Now, you must serve all your customers at preordained stops during each day. You will be advised of how many stops there are, and what the people want before you arrive. Whilst you drive you will be given special orders SO’s to dish up, these will increase your pay at the end of the day, and will impact on your score if you fail to deliver. Every stage has a mixture of different food types; HS and the pre-mentioned SO. The Holding Station (HS) food can be made on the move, but can only be served when stationary, it has a set spoil timer, and if you don’t plan your approach correctly, you will have a lot of angry and hungry punters as their food rots away. 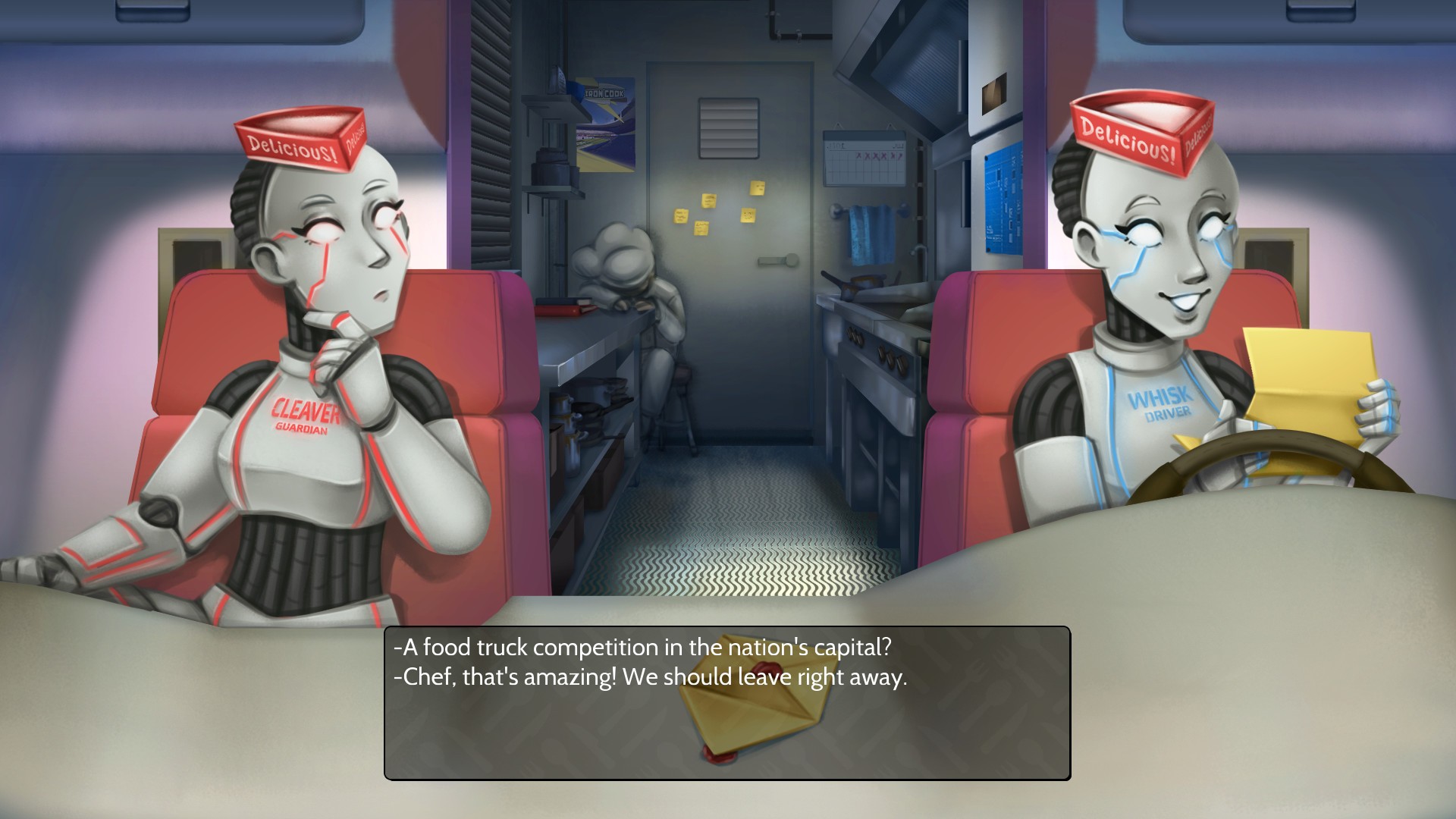 Each of the dishes has a difficulty number attached to it from 0 to 5, the harder the food is to prepare, the more money you will get. Unfortunately, the tipping system has been removed, so there is no additional bonus for a job well done. The in game currency (which can only be earned through game time and skill) has been changed from territory specific to an all in one form known as CrumbCoin. You use this all-important item to buy new recipes, and beautiful trinkets for your van, after all, who wants a boring food truck? Not me, that’s for sure!

You as the chef earn experience points each time you complete a day’s work, this slowly builds up, and fills a meter known as YUM. Once it’s full, you go up a level and receive an upgrade object. You can use these special items to improve your van and make serving your adoring public much easier. Upgrades comprise additional holding stations, or bonuses that make the day to day running smoother and quicker. I really enjoyed this element of the game as it kept the gameplay difficulty well balanced. As you start out, you’ll struggle to achieve a high score, and the best medal you can hope for is bronze. As the game goes on, you can improve your van, and revisit these levels in order to collect the gold medals, and the additional funds that go with them.

When I consider playing a game at night, it’s usually to relax and unwind, CSD3 doesn’t allow you this pleasure. You have to be on top of your game to be successful, and even one momentary lapse can cause catastrophic failure. This doesn’t mean that you won’t have fun playing it, after all, the madness and continuing pressure is what makes this title great. You are given the freedom to select if you want a chilled difficulty, or the most impatient and petulant customers you’ve ever come across. Both modes will make you scream in frustration, but the chilled version makes life a heck of a lot easier.

If you find that you get bored with failing missions by yourself, and you fancy falling out with friends or loved ones, then you can attempt to work on this in a local co-op mode. Fearing that this could end my marriage, and with no-one else to play with (damn you lockdown) I unfortunately can’t comment too much about this. Needless to say, if it’s as infuriating as the single player experience, there will be arguments and smashed controllers up and down the country. Don’t say you haven’t been warned.

When I first saw this, I could have been forgiven for thinking it was a mobile game port. The visual elements are crisp, clean, but very simple. What stops this from falling into the mobile only zone is the complexity of the tasks at hand. The console really has to work to keep up with all the action, and I don’t think a phone or tablet could keep up with the demands. I enjoyed how the developers put the game together, and the User Interface is nice to look at, and easy to work around. 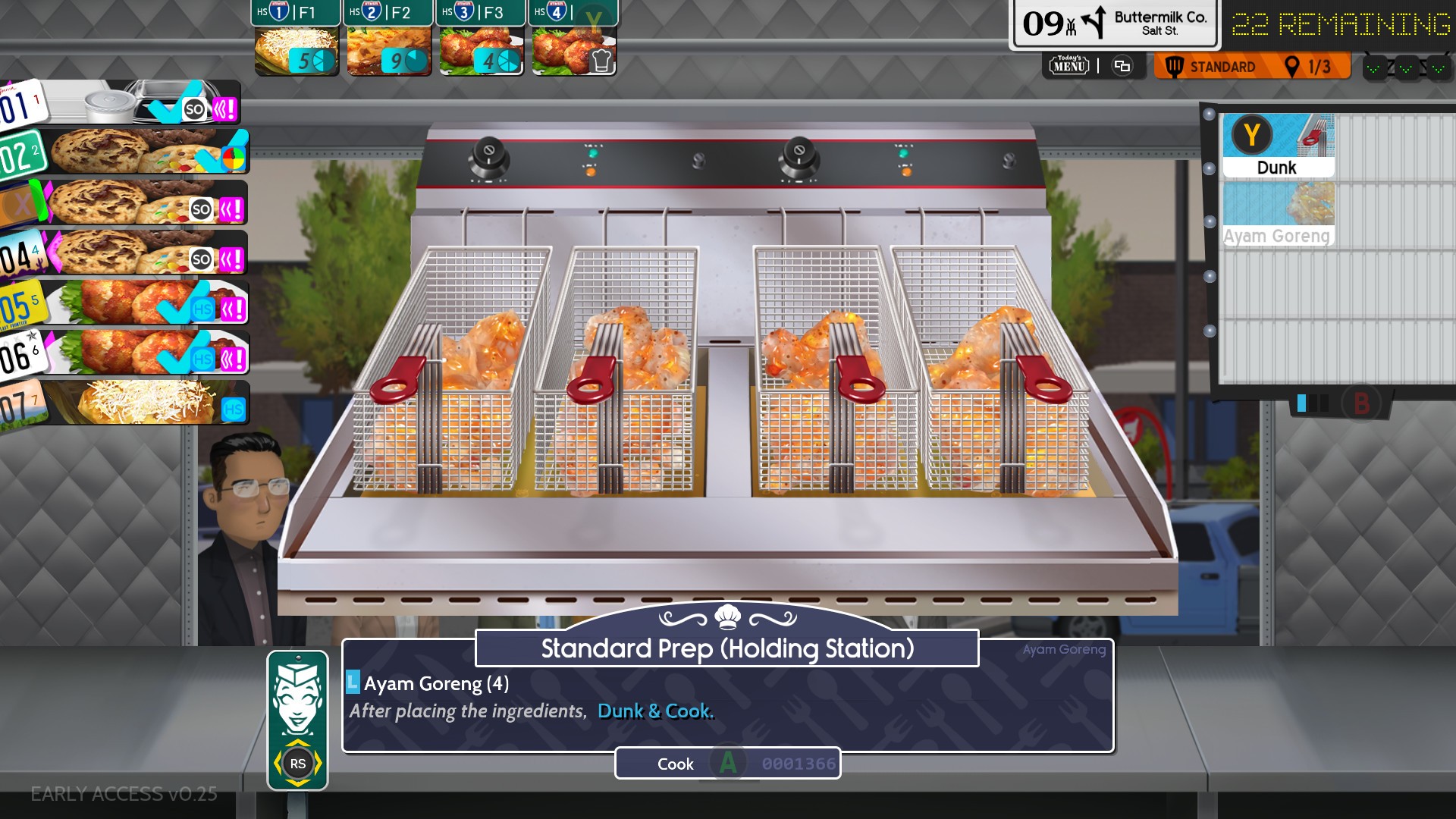 I simply loved the audio presentation, I rarely play my review games while I talk in a party chat, but I fancied a quick go before I went to bed while I chatted with friends. Their comments were brilliant. They ranged from, “What is that noise?” to “Are you inside a Japanese arcade?” The music is loud, full of bass and has a high-tempo. It was unusual and has a distinct jRPG tone to it. The authentic sound effects of the food cooking helped to set the scene, and the beat kept you working at a fast pace.

Since my obsession with Guitar Hero ended, I haven’t had to endure a title that expects me to nail perfect button combinations like this one. I’m not exaggerating when I say that having spider fingers (that’s fingers with 8 little fingers coming off each one) would have helped. (Well, maybe it’s a bit of an exaggeration, but it certainly would make the game easier.) As you choose more advanced recipes, the requirement to use the full array of buttons on offer becomes apparent. It’s a test of mental ability and dexterity. It’s challenging, but Vertigo Games have done a spectacular job with their control set up and button mapping.

When I look at the virtual cooking genre, I always worry that the concept will get repetitive, and there will be limited replay value. I’m glad to say that isn’t the case here. With medals to aim for, plenty of recipes to learn and master, 11 territories to visit and the co-op mode to experience, there is plenty to draw you back. If you then add into the mix (pun intended) the challenging and in-depth achievement list, this title will keep you going for hours.

I admit that when I first received my code for this, I was a little dubious to say the least. I’m glad I went into it with an open mind as it turned out to be a fun filled and infuriating adventure. Upsetting your paying customers is par for the course and is something that you will have to get used to when you play this. If you try the co-op gameplay, expect laughs and arguments as you desperately try to succeed. Do I recommend this frustratingly good game? Of course I do. It builds on the success of its predecessors, and should be a hit with its current fans, and those who decide to try it for the first time. So your restaurant blew up! Dust yourself down, grab your van and make the most of a bad situation, people want you to be that world famous chef with or without your beautiful building behind you.

A fast-paced arcade cooking game that will push you to your limits.