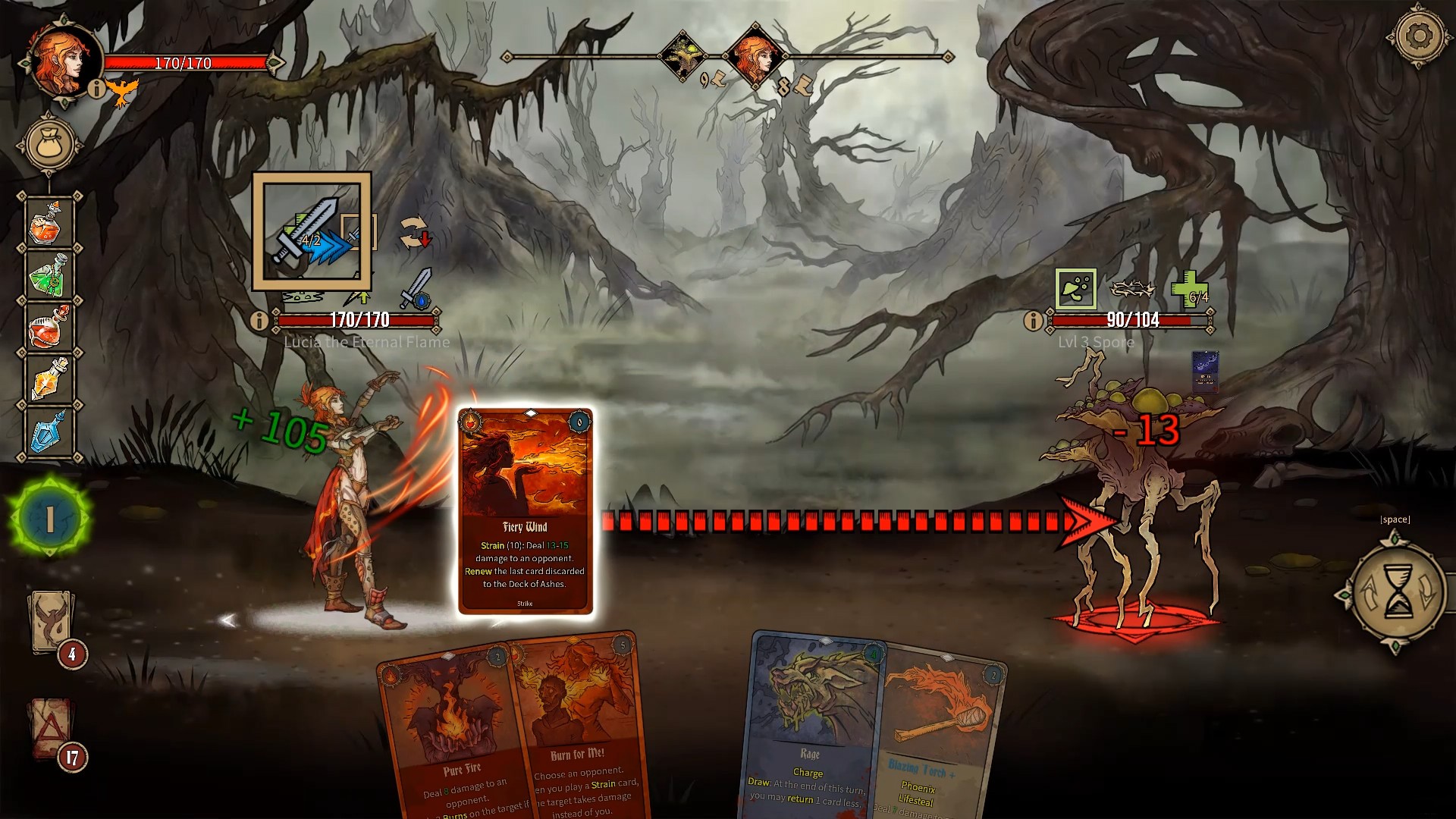 After the success of Slay the Spire deck-building roguelikes became more popular. Riding this wave, a lot of new games emerged, one of them being Deck of Ashes. Featuring lots of unique mechanics and overall good quality, it is a good addition to the roster, though it’s not without flaws.

Surprisingly enough for a roguelike, Deck of Ashes has a fully fledged story, not just a bit of setup. Each of the four characters has their own motivations and objectives while still playing into the overarching plot. That said, the ending feels somewhat rushed compared to the rest and a better job could’ve been done with it, but it is nonetheless appreciated.

The way said story is structured is with 5 dialogues which, after the first being used as an introduction, appear whenever a boss is beaten. The introduction explains the motivations that drive the character, with the rest being conversations with the members of the camp. All of them follow the same structure and lead to a point at which they converge, setting up the finale.

Besides a decent story (for the genre) Deck of Ashes also has good graphics. The artstyle is like that of Darkest Dungeon while still being its own. There are a lot of different enemy designs, though some are not seen that much due to the randomness of encounters. It is also a nice touch how all monsters of a same type share features such as the palette employed. The same can’t be said about the backgrounds though. Despite being well made and different, there ultimately is a pretty big lack of variation, the same few backgrounds will be seen throughout the whole game. 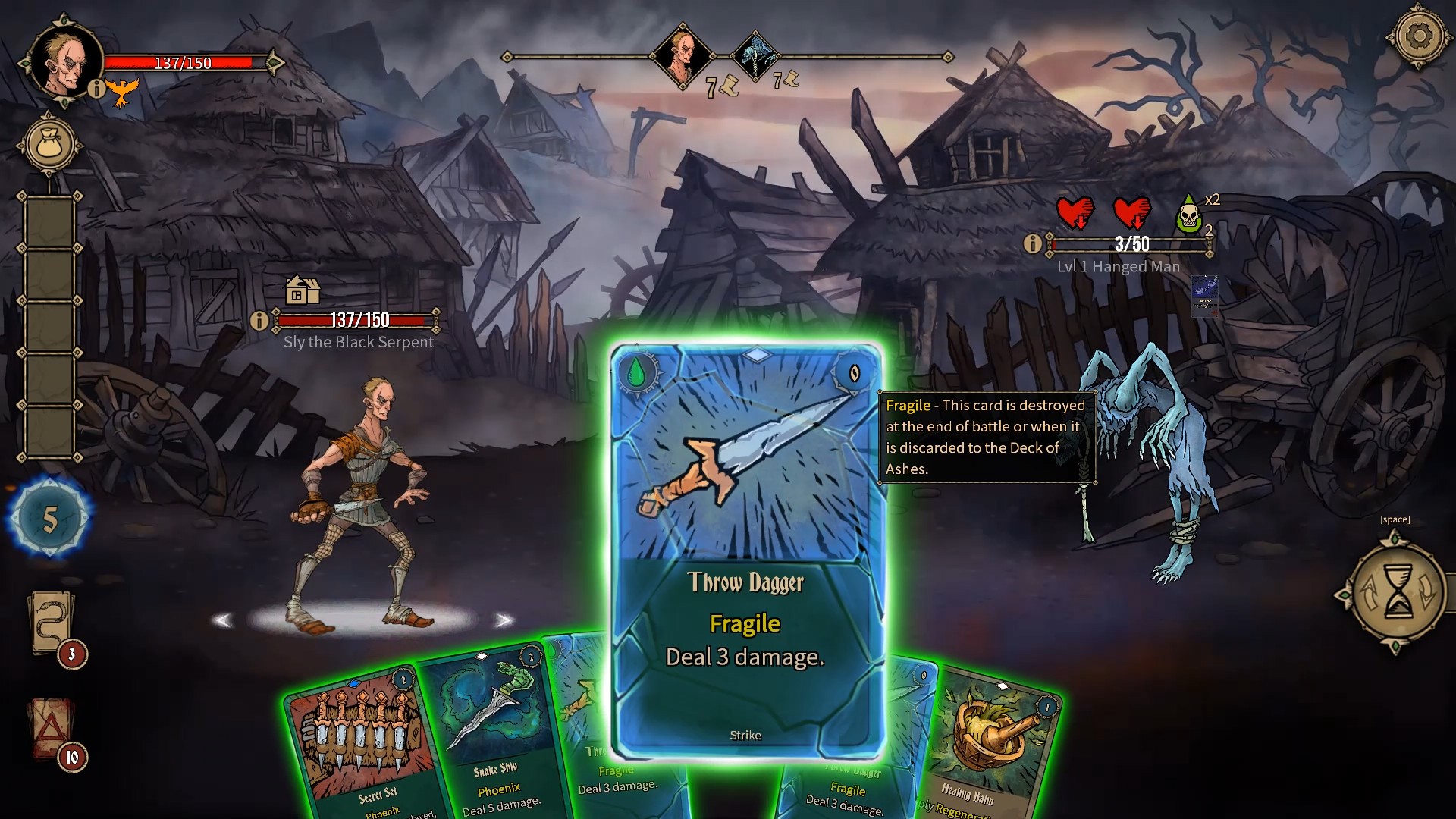 The soundtrack is pretty decent as well, though with little being special to it. It’s the kind that is usually found in more dramatic games where, quality aside, the music is repetitive and “atmospheric” over anything else. There is also voice acting featured in the game for all the dialogues previously mentioned; these are quite good, though the lines spouted by the characters during combat can be out of balance at times or even get cut short by other things. That aside, the SFX are alright as well, they all do their work without being too much or out of line.

Finally onto the gameplay; as previous mentioned, Deck of Ashes is a deck-building roguelike. As the game progresses the player, the player has to add cards to their deck, as well as removing or upgrading old ones. In Deck of Ashes this is done through recipes, which can be found across the map inside chests or with random events known as Ash Storms. With these recipes new cards can be crafted back at camp by paying ash, one of the many currencies of the game. The rarer the card is, the more costly it is to make, with some even having special prices.

Another important mechanic is the trait system, directly related to the shop upgrades. As the player explores the map, they can use the time to get resources used to improve the shops, once this is done by the blacksmith in particular, traits are unlocked. These traits are basically passive abilities, which can be equipped one at a time. While some characters such as Buck don’t particularly need this, others improve a lot or straight up require them. 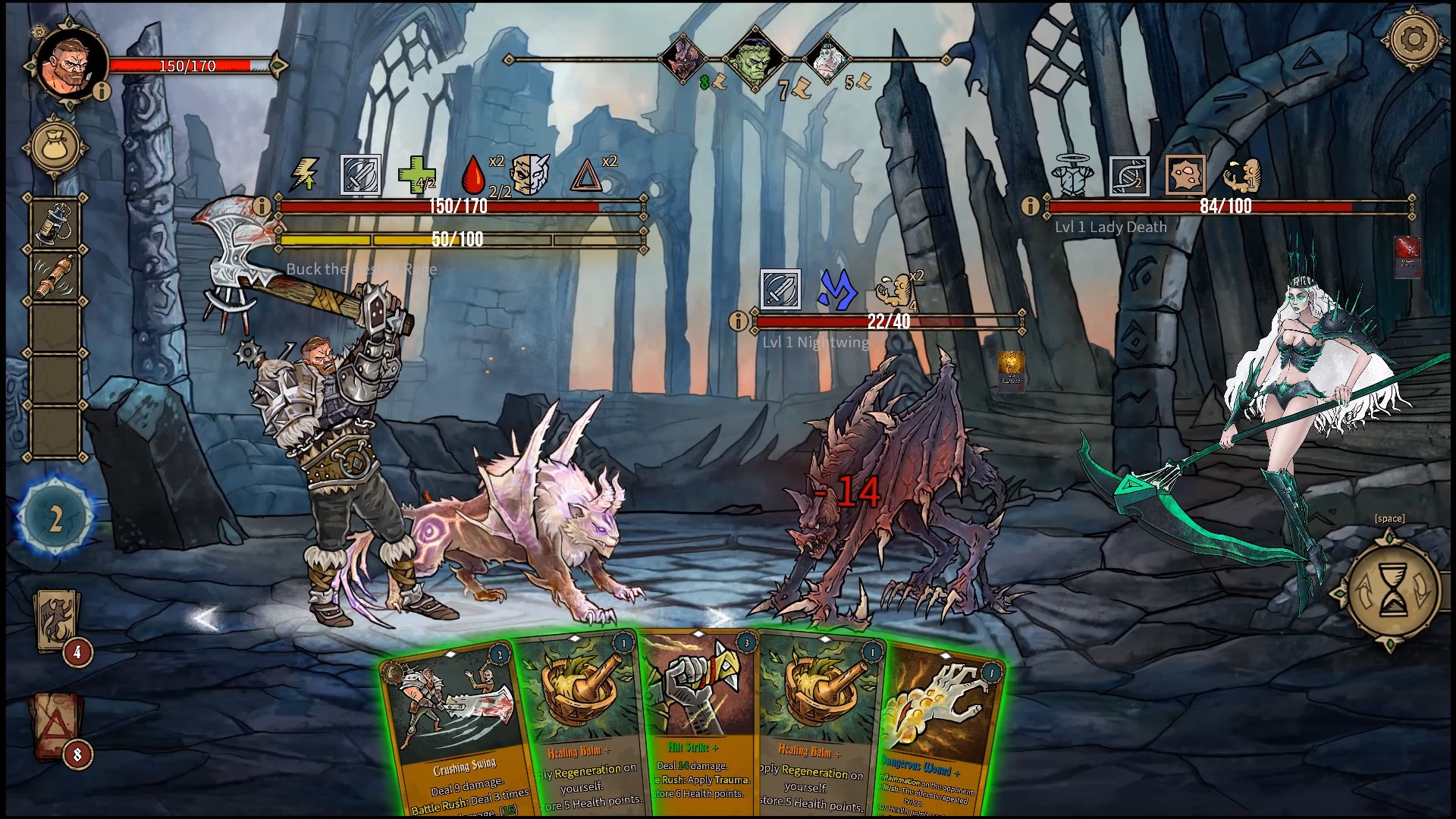 The end goal of the game is to reach Death’s Valley; to do so the player must pass through several areas, two of which alternate from playthrough to playthrough. In each of these areas the player can roam around collecting resources, battling enemies and opening chests, all the while the “ruler” or the boss of the area looks for them. Every once in a while, the ruler takes an action, destroying part of the map and once the timer ends, the player is forced to battle them. The idea is generally to fight enough battles and activate enough events to use all the mechanics mentioned earlier on in order to gain advantage over the bosses.

After all this has been mentioned, the game is quite buggy, with a lot of problems that can happen one way or another. During my playthrough I ran into bugs locking shop upgrades, disabling the map and softlocking the game. This last one was easily replicable as well, happening every single time a few steps were applied. Lucia has two spells which combined destroy an enemy at no cost; if this strategy applies to the final boss during the epilogue, the game doesn’t register the event and forces to alt f4 the window, having locked everything in place.

I had a pretty fun time with Deck of Ashes; the mechanics are solid and entertaining, with all characters being fun to play (even if I didn’t enjoy Lucia half as much until I figured out a really particular strategy). In the last area I usually ended up feeling like I was wasting time; by that point I usually had a build figured out and only needed a few finishing touches, so I more than once I ended up moving between two tiles to trigger the boss fight. As I mentioned when talking about the story, the final boss in the epilogue was somewhat underwhelming (besides the story itself); this happens because all characters keep the builds using during the normal campaign, leading to a battle where already powerful builds can be used, this removes the challenge.

Deck of Ashes is a pretty solid game with interesting mechanics and qualities, though it could be improved on. Despite this it is a recommendable and enjoyable experience for any fan of deck-building games.