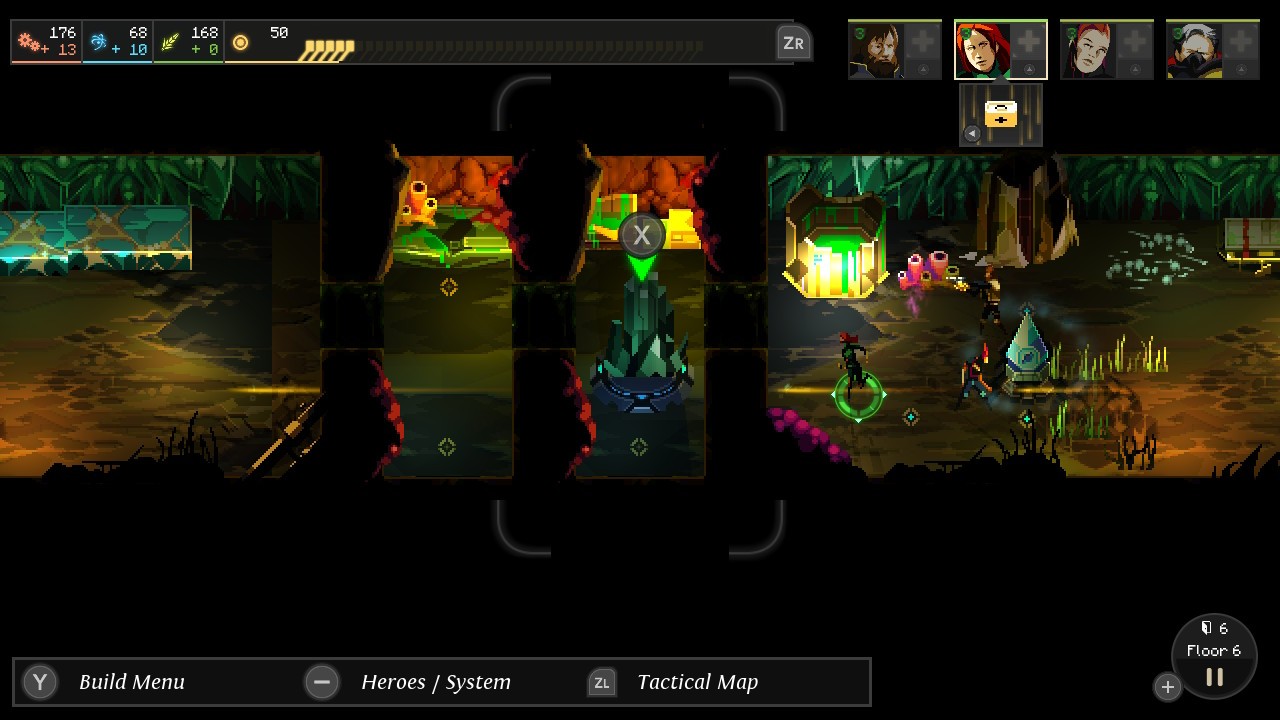 Dungeon of the Endless has been out on PC (Steam) for some time, so I was thrilled to see it had finally made its way over to console. It’s a roguelite tower defense game in which you must defend an energy crystal from waves of enemies as you make your way into the depths of your crashed ship. What this means for the player is resource management, risk versus reward, and the frightening feeling of being at the complete mercy of the RNG.

Normally in any game you begin with a tutorial. For whatever reason, Dungeon of the Endless provides a brief overview of how to move and what resources are used to build and then leaves you to your own devices. At no point does it explain to you that, upon finding the final room, you must bring the crystal from the first room to the end of the level without dying nor does it explain that only rooms with power in them can be built in and that a set number of rooms can be powered at once. I only knew these things because I had played this game before, so I imagine newcomers will be confused and frustrated. It doesn’t help that the controls, which work well enough on PS4, are better suited for a mouse and keyboard and will take some time to get used to. All of this adds up to a steeper learning curve than necessary. Navigation is as simple as toggling to a character in your team with R1 or L1 and selecting the room you want to go to with X. You can build by pressing triangle and the active character will build the structure you’ve selected in the current room; open nodes allowing. You can check the status of your team via the touchpad. This menu is where you’ll also level up and heal allies. Finally, you can divert and restore power to rooms using L2. Your energy crystal only has so much juice, so turning off rooms that aren’t essential will allow you to power ones with more strategic advantages.

The gameplay loop of Dungeon of the Endless is as follows: choose your team and your ship–> head for the exit, looting, building, and clearing out enemies as you go–> return to the beginning of the level to retrieve your crystal and make sure those defenses are tight!–> make a mad dash to the exit as waves of enemies come crawling out of the woodwork to attack you–all while keeping your team and crystal intact. Each character has its own strength and weaknesses and ability kit. It’ll take a few runs to figure out team synergies and who’s who, and additional characters can be unlocked by successfully finishing a run in each available ship. 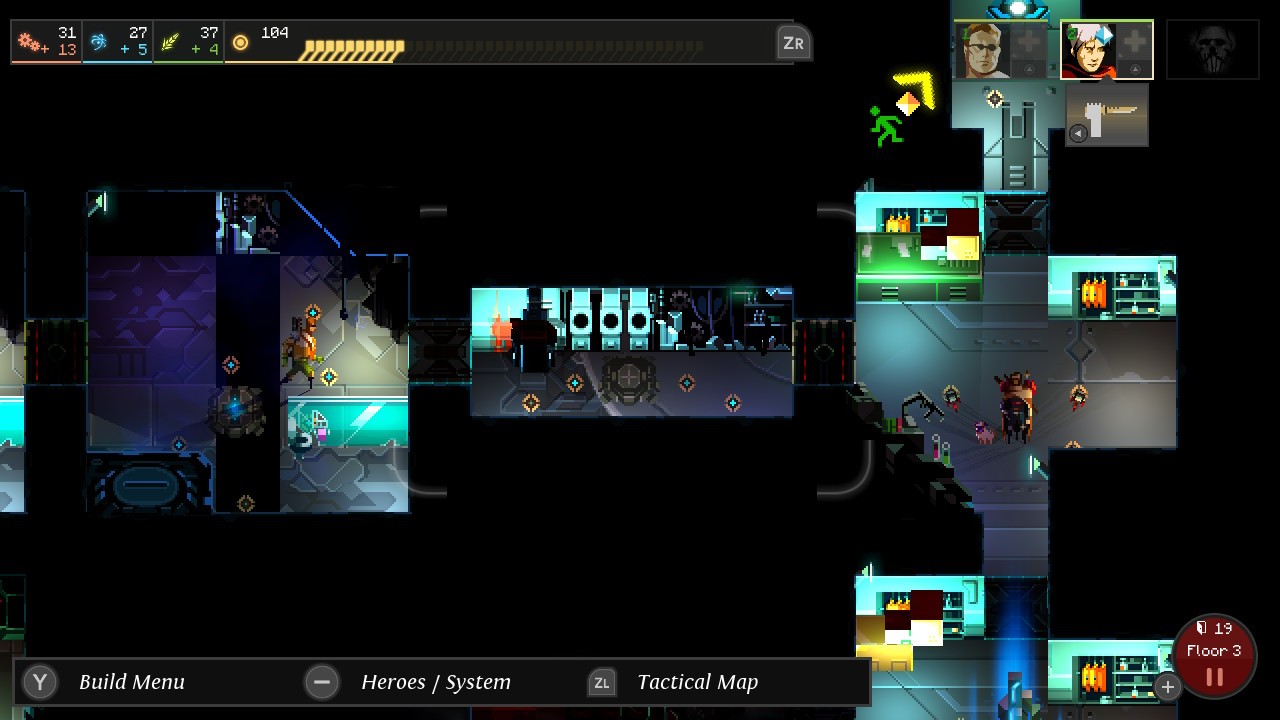 The second step is my favourite part; there’s just something very calming about methodically exploring each room. As you guide your team of 2-4 through the procedurally generated bowels of your ship, you’ll encounter both enemies and opportunities. In game resources (research, food, etc) accumulate the more turns you spend on your current floor. You can in turn spend these currencies on building generators, which bring in more resources, and defensive structures like turrets. You can also use them to heal and level up your team members, meaning careful allotment is necessary. Characters will fight automatically when directed to a room with enemies, but they won’t retreat on they’re own when facing certain peril, so splitting up team members means you’ll need to check up on them periodically. Occasionally you’ll also find merchants and these are your opportunity to bulk up your characters for a resource fee.

During the third step, you’ll use whatever clairvoyancy skills you’ve got to hopefully get an inkling of where you’ll need to focus your limited defenses because it’s about to hit the fan. You can level up your characters at any time and doing so unlocks new skills and makes them more combat-capable. As you gather more resources, you’ll also be able to upgrade structures to make them more efficient. Depending on the character that creates a defensive structure, some are specialized further.

The fourth and final step I’m not such a huge fan of—but then, I’m pretty easily stressed. The moment you touch your energy crystal, all hell breaks loose and enemies come from every direction in an attempt to stop you’re escape. This is when you either feel a sense of pride because your turrets are going ‘pew pew’ and keeping you from harm, horror because your defenses were light on a side where a heavy concentration of enemies are breaking through, relief because you just barely squeaked by and made it to the stairs, or annoyance because you failed utterly. Whatever the case may be, you’re able to push on from here and either do better next time or carry on to the next thing. God speed. 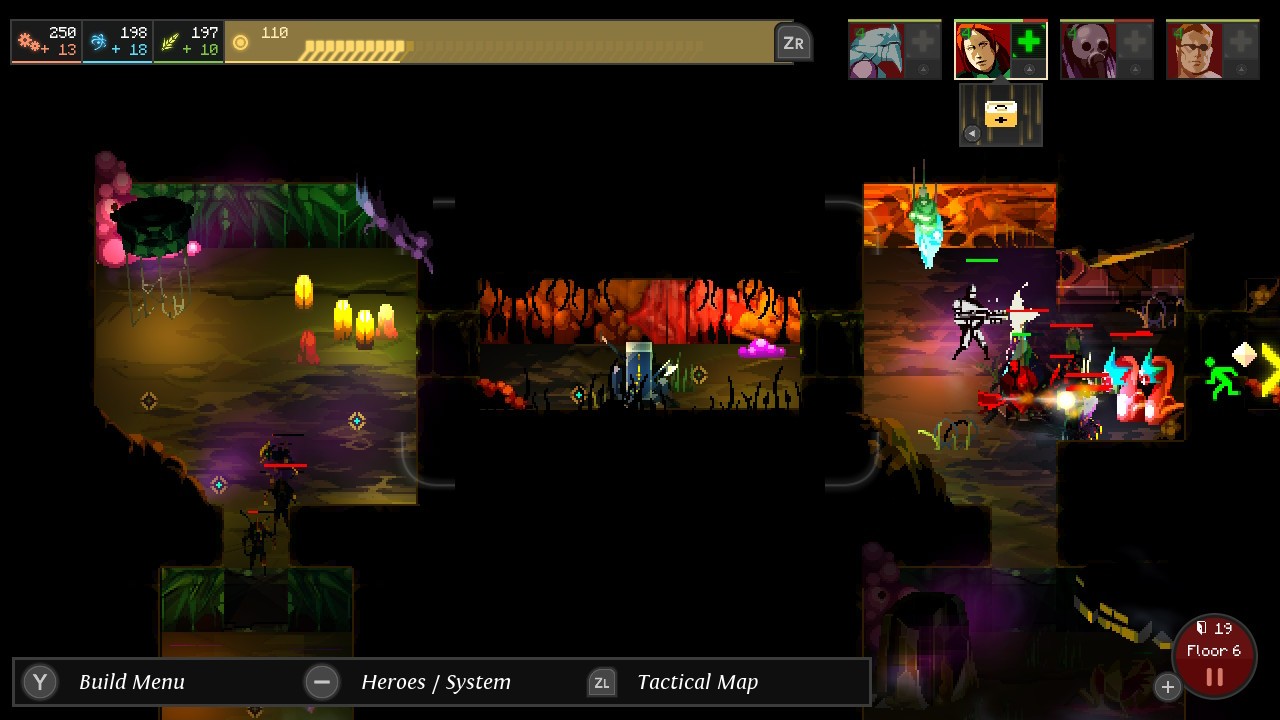 Sometimes things get lost in translation. I get that. A very important aspect that went missing when Dungeon of the Endless got ported to console is the option to play cooperatively with friends. I expected couch co-op at the least and scratched my head when I realized I controlled both characters. This sort of frantic experience is made better still when arguing with a friend over how best to manage resources, so I’m not entirely sure why multiplayer didn’t make the before-release cut. Will it be added in later? One can hope, but seeing as it’s marked as a single player game in both the eShop and the PlayStation Store, I wouldn’t hold my breath. I’m not a game developer, so I have no idea what all it takes to open up the floodgates that house player to player connectivity, but I am a gamer and I know they this change isn’t a positive one. I suppose someone who hasn’t already played the Dungeon of the Endless before won’t notice the lack of multiplayer, but for those like me who are excited to take another stab at it five years later, the absence is both obvious and disappointing.

While it would have been even better if Dungeon of the Endless had retained all aspects of the console, there’s no arguing that this is still a really good game. It would easily be an 8 if they’d introduced even just local co op. For now it’s sitting pretty at a 7 as a frantic tower defense experience that offers scores of challenge, but maybe could benefit from control tweaks and additional gameplay modes.

Dungeon of The Endless Review

Though Dungeon of the Endless is a solid single player tower defense game, one has to wonder: what happened to co-op during its port from PC to console?