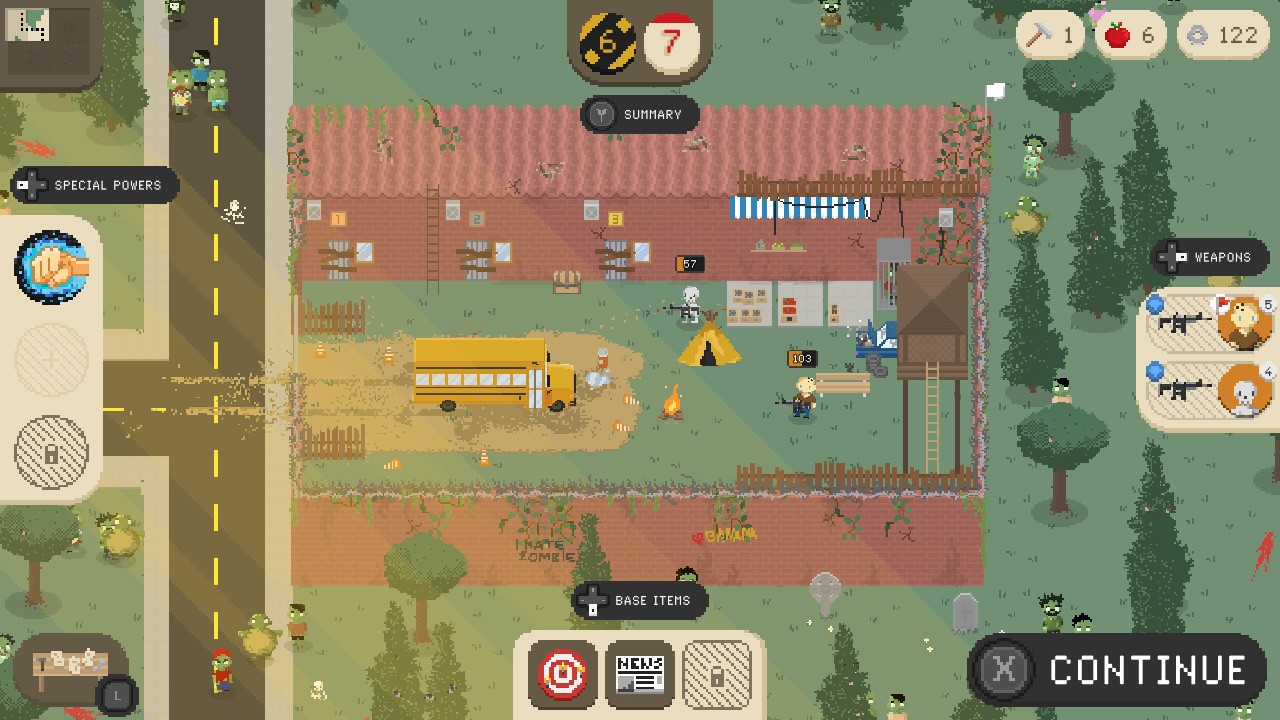 I don’t know why we sometimes glorify zombies in our popular culture. I mean, sure, most of the movies, TV shows and books out there show that being in a zombie apocalypse would be a bad thing, but there’s just SO much of it! Zombies aren’t even a new idea, but I feel like we’ve become awash with zombie concepts in the last twenty years after having them be relatively B-Movie, sub genre monsters. Now with a massively long running TV show, some truly cool Korean zombie movies and at least two romances I can think of (not to mention whatever the hell Disney is doing with zombies), I think we’re all getting a tad complicit. We don’t want zombies to eat everyone and everything, seriously people. This year is weird enough, we sincerely don’t want to add zombies to the mix. Thankfully, Pixelsplit came along and took a page from Death Road to Canada mixed with 60 Seconds to remind us all: trying to survive in a zombie filled world sucks.

Deadly Days puts you in the roguelite strategic world of zombies, in which some serious jerks at Big Beef infected burgers and make everyone into a zombie through what appears to be purposely tainted beef. Now, you’ve got to take down the burger production factory, but a couple things stand in your way. One, you do not understand where it is. Two, there are a metric ton of zombies everywhere. And three, you’ve still got to survive, which means eating, expanding, progressing and making the most out of life. Armed with your impenetrable school bus, tiny base and hopefully enough apples to survive, you need to set out, scavenge supplies, rescue survivors and raze burger joints wherever you can find them to hopefully piece together the map that shows where the nefarious Burger Factory hides, so you can stop the spread of the zombie virus once and for all!

As a strategic roguelite, Deadly Days offers a ton in terms of replay and approach. The game handles as such: you’re put in charge of two survivors, though your ranks will swell with enough patience and skill. Each day, you need to make sure you have enough food for everyone, then set out to a specific location to look for armour, weapons, supplies and others. You don’t know what’ll be there till you arrive, though you have a rough idea about size, loot and danger. Once there, you need to direct your crew in a top-down style to explore the area, trying not to get eaten while you gather up what you can salvage. You need to stay a minimum of 40 seconds (that’s how long the bus takes to recharge), and you really, really want to leave before dark when visibility gets bad and zombies get bold. If you can, try to finish all the tasks on your check sheet for maximum rewards and achievement, but don’t be a fool or a hero. If things are bad and you’ve got enough, head to that bus and get the hell out of there. Try to bring everyone back, but don’t be hopeful if someone gets separated. 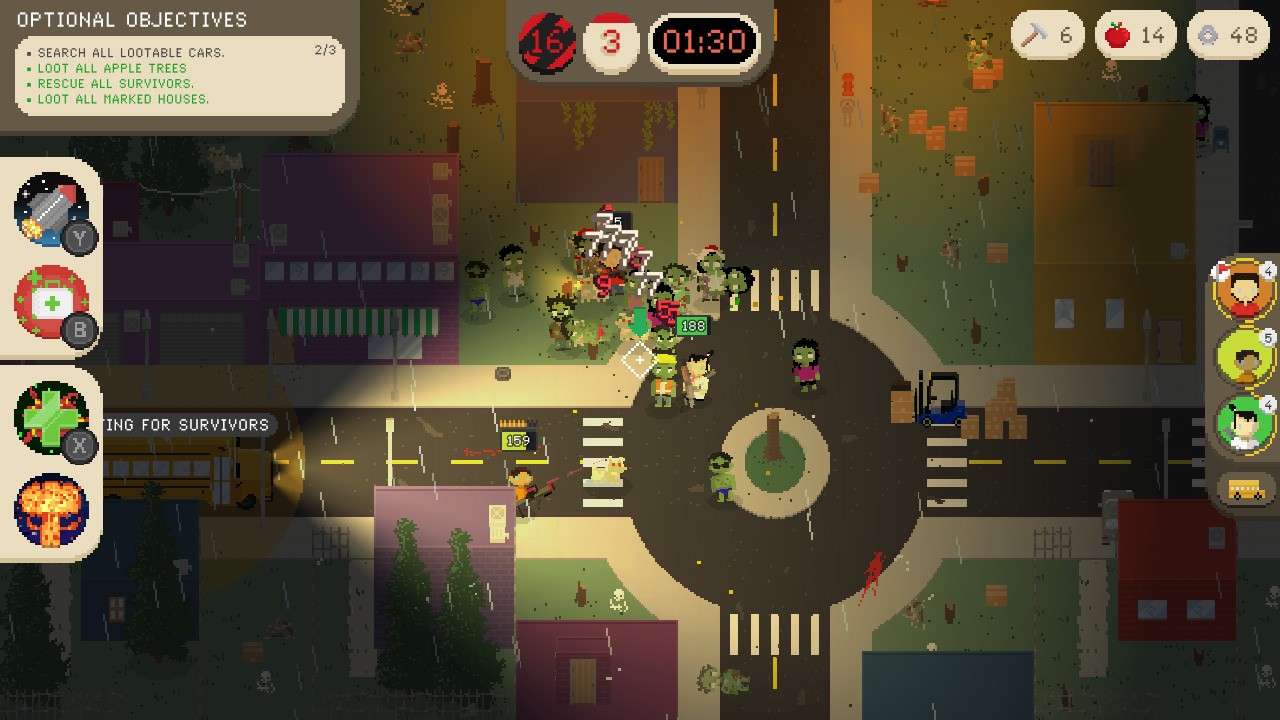 Deadly Days gives players plenty of versatility in terms of how to approach the game. The survivors will automatically target zombies approaching, though they might need a little help if the enemy is too dense or coming from multiple directions: the AI isn’t great for prioritizing. Also, you’ll have skills that give you omniscient assistance to the survivors, though they all work on a cooldown timer. Things like an airstrike (blow up obstacles and zombie herds), healing (incredibly helpful!) and zombie freezing are just some of the thirty abilities you can find and unlock throughout gameplay. You can also make sure to keep your survivors busy, as standing around can lead to looking like a sandwich to the right (any) zombie. It only takes one survivor to loot a car/building/box/billboard, so has the other survivor move about and loot elsewhere in the meantime. They’ll automatically join back up when one is done, so just keep the party moving and things should work out fine.

There were some great points to Deadly Days, for certain. I enjoyed the execution of the game, particularly that there was a singular currency that addressed everything. From repairing found weapons to unlocking new skills to upgrading existing passive treasures, you can worry just about a singular mind with looting and then expanding into what looks good or bad for you to make the game sing. For example, it was more important to me to upgrade my held item that increased my shot damage than to just hand new weapons to my current survivors: I thought effectiveness with what you had was better than trying to add something new to the mix. In the course of my gameplay, I learned to understand better where cash was better invested, though I always burned a couple apples at the beginning and power level my initial survivors: the likelihood of finding a third survivor in the first couple of explorations was low.

Also, the roguelite nature of the game was a blessing and a curse. Deadly Days wants you to play more and progress: there’s a separate levelling meter that rewards you for how far you got in a previous run by unlocking more potential perks and items. As a result, I wasn’t upset when I ultimately got eaten, even if it was on the first day. I knew I was achieving something. Having said that, it can still be incredibly frustrating to go through the process of generating a seed, having the strangely janky bus ride to the location, and then dying before you even complete your first looting session. This came in equal parts to my ineptitude and also to the handling of the game. 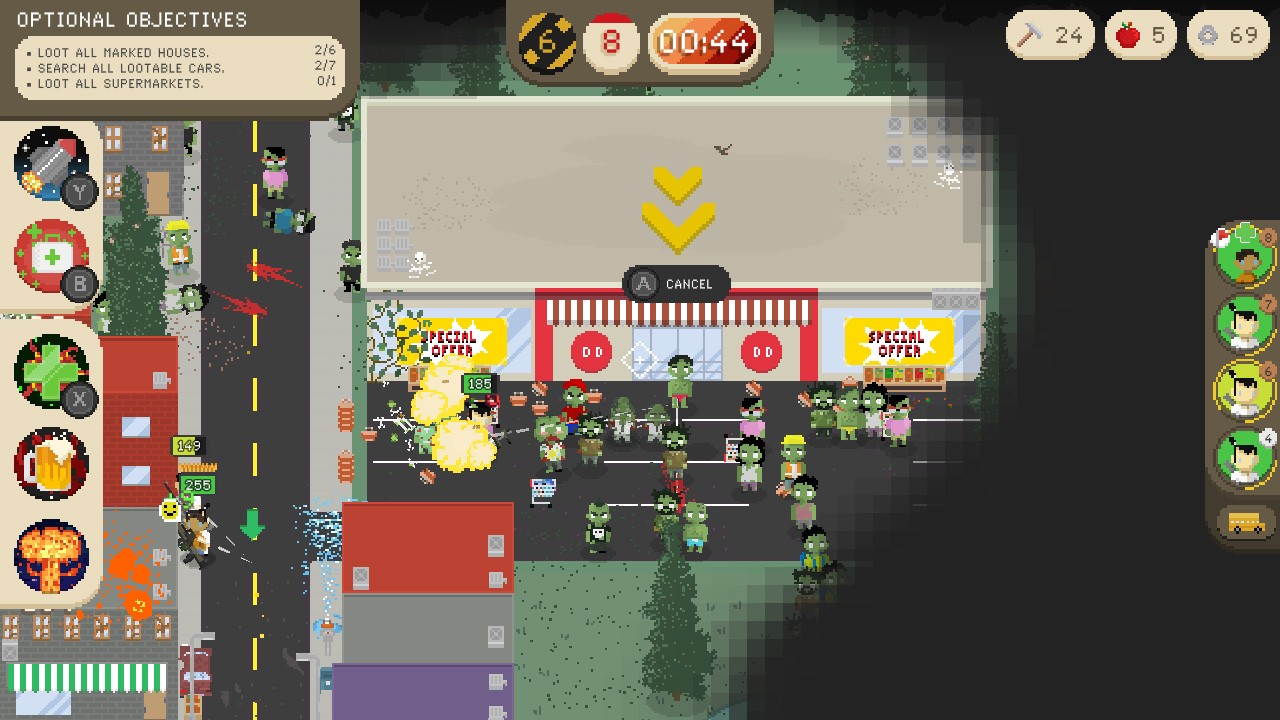 I didn’t like the way the fog of war worked on Deadly Days. Like at all. The areas where you can go, but not see yet, and the areas where you CANNOT go are virtually indistinguishable in handheld mode and you don’t know the difference until you try to walk. So there will be times where you head towards one direction only to find that it’s an invisible dead end and now zombies are up your ass. Inversely, sometimes I cannot figure out where the damn airdrop crate is, and it turns out it’s just over yonder, but I assumed that part of the map was off limits, and it only gets worse when the night comes in. This is annoying in and of itself, but when you factor in the awkward way that the AI works, it becomes worse. Clicking on an area to move (not my favourite protocol) can result in running into a building or going the complete opposite direction to get somewhere because the AI feels it’s the best choice. Thankfully the zombies have their own levels of incompetence and you can, mostly, run right by singular or pairs of zombies without hassle. It’s when little Billy thinks the shortest path is through the middle of a murder buffet that we have issues.

But it’s the learning curve that saves this game. The more you play Deadly Days, the smarter and easier it becomes. You understand better about how to navigate and approach the levels. You know more about keeping close to the bus and monitoring the clock. You cut your losses when you can, grab what you need to call it a success and fix all your strength on car blockades: if they’re set up, that means something good is behind them. It’s engaging, and it gets addicting, and it’s a wonderful game for “one more try” again and again. If you’re looking for an offbeat zombie roguelite, this is pretty damn solid, and I enjoy the dry humour shot throughout. A solid seven brains out of ten.

A gentle reminder that a school bus is not a guaranteed safe transportation vehicle in a zombie apocalypse, but also not the worst choice.