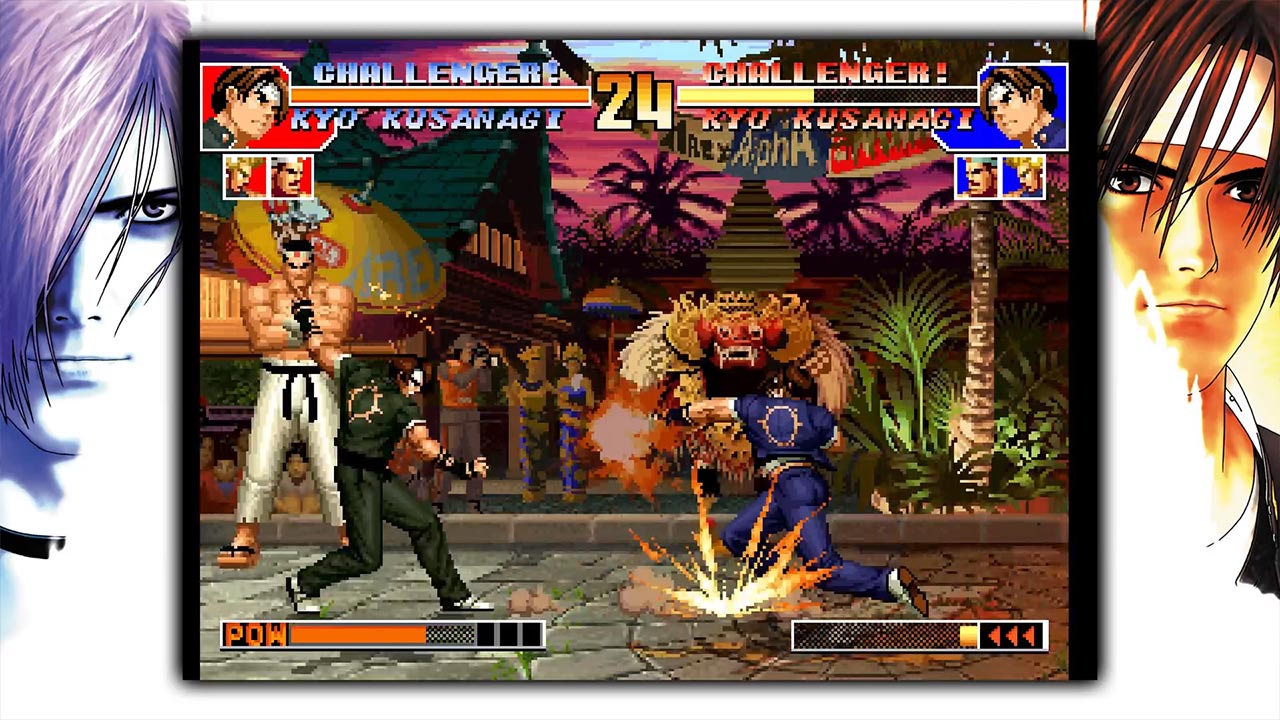 The SNK series THE KING of FIGHTERS is a long, storied battler. Characters from The Art of Fighting and Fatal Fury, and some exclusive to this series, are all duking it out for superiority all over the world in a tournament called The King of Fighters, and have been doing so since 1994. This offering, for 1997, ends a 3-part story arc called the Orochi Saga. It  brings 2 different styles for power moves, ADVANCED which fills as you defend yourself and attack using Specials and EXTRA, which enables you to do a super powerful moves at full power bar. The game also provides you a way to turn the tables when you are literally on the last drop of strength, with the aid of Desparation moves. The battles are fought with a team of 3, which you can choose your fighters based on preference, or the group that they represent. This aspect sets it apart from most fighting games, which you must choose one to tackle all of your opponents, and one I feel have felt SNK did right.

The controls are 2 light kick and punch, as well as 2 strong ones, which you can either leave as is, or you can assign them, accordingly to fit your style of play. Me? Well, I didn’t mess with the setup, as I left the default in effect. I was ready for action! I was not prepared for what happened next, though…but I will circle back to explain why. 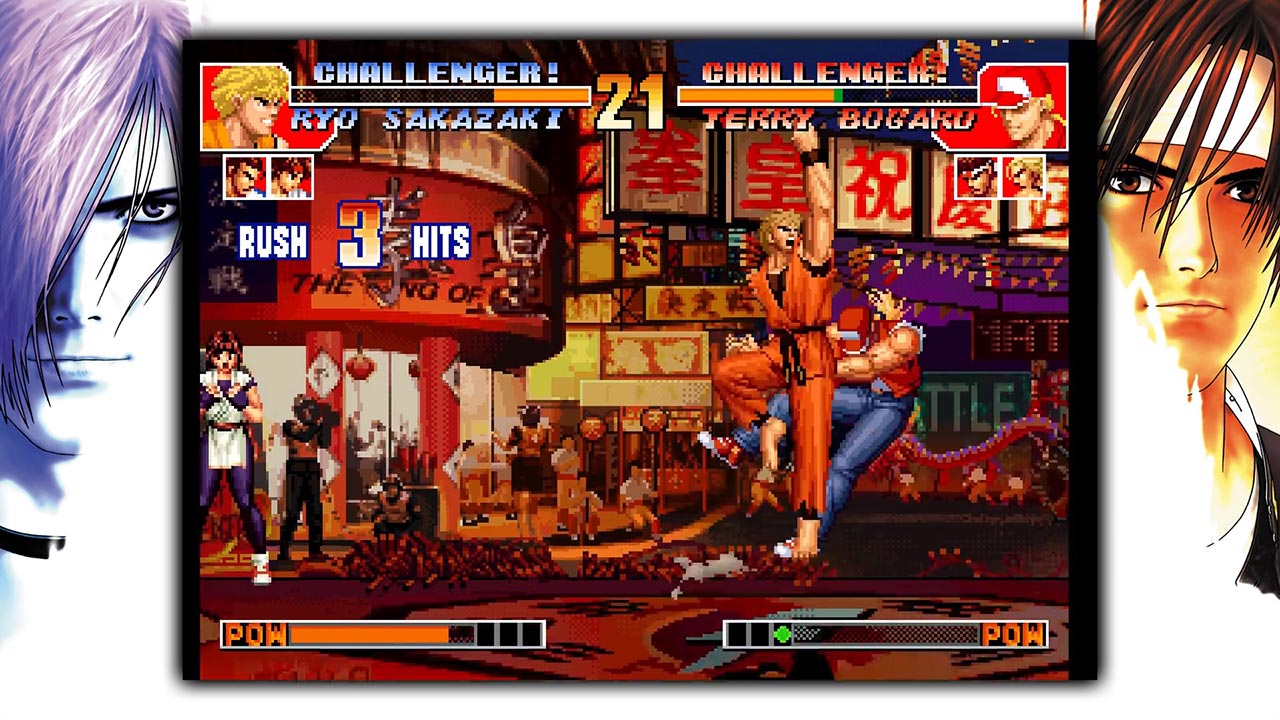 As I stated earlier, the battles take place all over the world. The backgrounds are vibrant, full of movement and detailed for a game rendered in pixels. The character animations are also detailed, to a degree. The frame rates seem to drop during each round, and even skip a bit. I found the movement difficult, as a result, and found my behind handed to me, time and time again…just to make sure i wasn’t losing my mind, I played the versus mode, both by myself, and with a mate, trying to make sure we can perform the moves, repetitively, with varying degrees of success. I have played both the Capcom based Street Fighter series, and King of Fighters at the local arcade (may they rest in peace, or come back, as they were fun) and ACA tried to bring that experience home, but despite being on powerful hardware, in this case, the PS4, it felt like they cut something out, like some animations for the main characters, because it was not at all smooth. Sometimes, my character would inexplicably blink and not do the punch or kick I had motioned, the animation seemingly moved to the last frame, even my CPU opponents. To make sure it wasn’t a console issue, I came out of the game, played something else, then came back. No, I was not losing my mind. It seems that the animations were cut…That definitely detracts from the fun. I kind of wish I had an arcade stick, as if that would make a difference, because all I have is the DualShock 4 controller, which, you would think, should be able to do the quarter circle, backs, forths, and other motions needed to render your opponent KO’d.

I almost wanted to throw my controller in disgust, at a few points, whilst playing. “If only I can finish the game with Terry, Andy, and Joe”, I thought, “perhaps it will make me feel better…” I kept repeating the motions for special moves, and they only worked 3 out of 5 times. I am grateful, at least, I was not in the middle of an esports tourney with those kinds of odds…I know it seems that I am ranting, however, understand, the animation cycles are important in fighters, if they are done properly, your timing for counters, and other moves will connect right. If they are clipped, your whole offense or defense is ruined. I have to yellow card this port for clipping. This only appears to be an issue, albeit a MAJOR one, with the foreground character animations. The backgrounds are smooth, lively, and detailed. This problem should not be a problem for an 8-cored, 256 bit system. The game was 32 bits, after all. The point is, if you are going for arcade perfect rendition, nothing should be taken away. Of course, if this clipping issue was there the whole time…SNK themselves should’ve been rightly be yellow carded. Rant over. 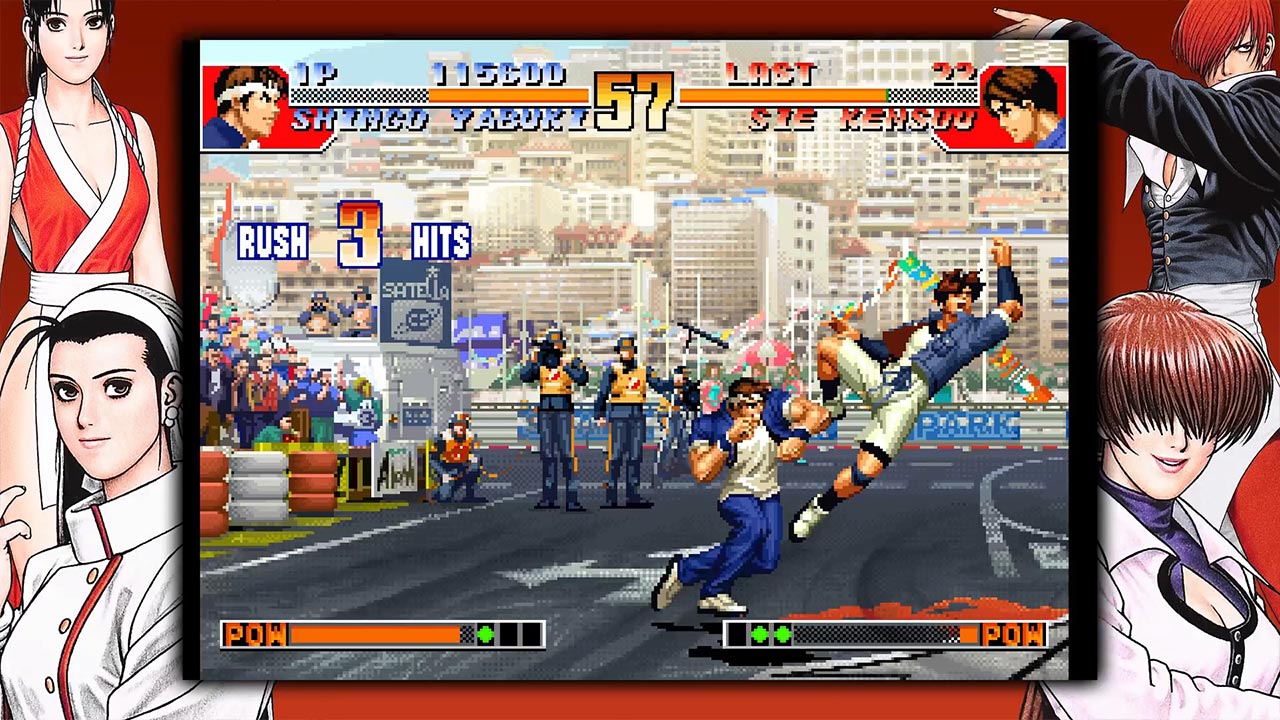 The music, to me, is a very important element in all games, as I am a musician. I would have to say that it fits the various locales that you fight in. Is it catchy? No. But it does not ruin the overall experience.  The music is rock-infused, with some ethnic elements. There’s a little jazz. Some dance music. It is mostly high energy, so you can fight. I can’t think of any standout tracks. But, I suppose that’s the point, right? Can you imagine getting your behind handed to you and you stop and think to yourself, “Hey! Now that’s music!”

The bottom line now is, do I recommend this port? The answer is: depends…The game has replay value, boasts loads of characters that you can team up, and offers versus play, so there’s that. But, for me, especially for a fighting game, timing, controls, and smooth graphics are needed for accurate gameplay. If you can give a pass on the control issue and animations clip, I tip my hat to you. I got frustrated on those two points. Big time. Now, if someone can lend me an arcade stick, we may be able to revise our view on this control aspect somewhat, it may help. But for other ports of this caliber: try to optimize the performance. Do not rest on your laurels thinking it is good enough. You can release an “enhanced” port of the game. Really. We won’t mind. Capcom, SNK’s competition, released updated versions of their Street Fighter 2’s for instance, tacking on “super”, “turbo”, and “ultra” to the title, as they tweaked balance and control issues. Context over. Is the game fun? Yes, but with some reservation. I don’t want to be overly critical, even though this IS a REVIEW, after all, because I LOVE SNK. These were games I played. I put nostalgia on the shelf, and played as though it was the first time. You can still enjoy the game.

A large team based roster, and vibrant visuals grace this classic series, but choppy character animations and iffy controls take away from the experience.