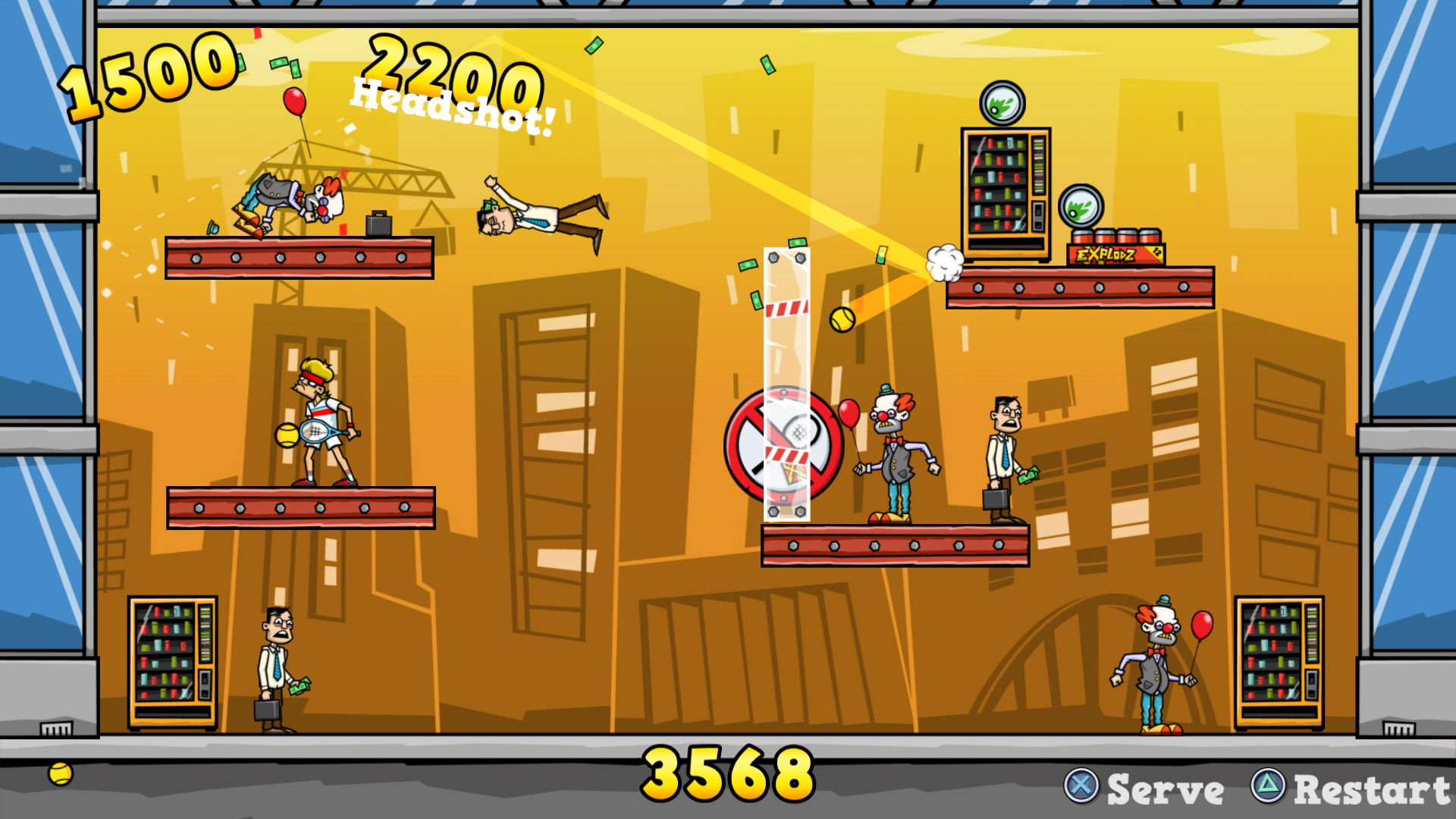 Energy drinks are a blight on humanity. We all know it, facts have been presented, 4 Lokos have been banned and re-formatted and Brawndo quietly left the market some years ago. But there hasn’t yet been a videogame with the cajones to step up and say “Hey, energy drinks are ruining everything, knock it off!” Who knew that it would be a Pete Sampras inspired hero to finally be the one to step up to the plate? Or, to the net, as it were, as we now take a look at Tennis in the Face.

Pete Pagassi (I couldn’t make this up) is a now recovering energy drink junkie and ex-tennis pro who has the need to take down Explodz, an energy drink that’s taken over the entire world and has people as zombie addicts. Pete doesn’t know what else to do except take his trusty racket, a few balls and beat everyone into submission as he makes his way over to the Explodz plant to finish it off once and for all. I’d like to say there’s more to the plot, but, other than the blowback from the media at large once a crazed ex-tennis pro starts destroying property, there’s not much else in terms of story going on. This isn’t a bad thing, and, once you jump in, you’ll understand why. 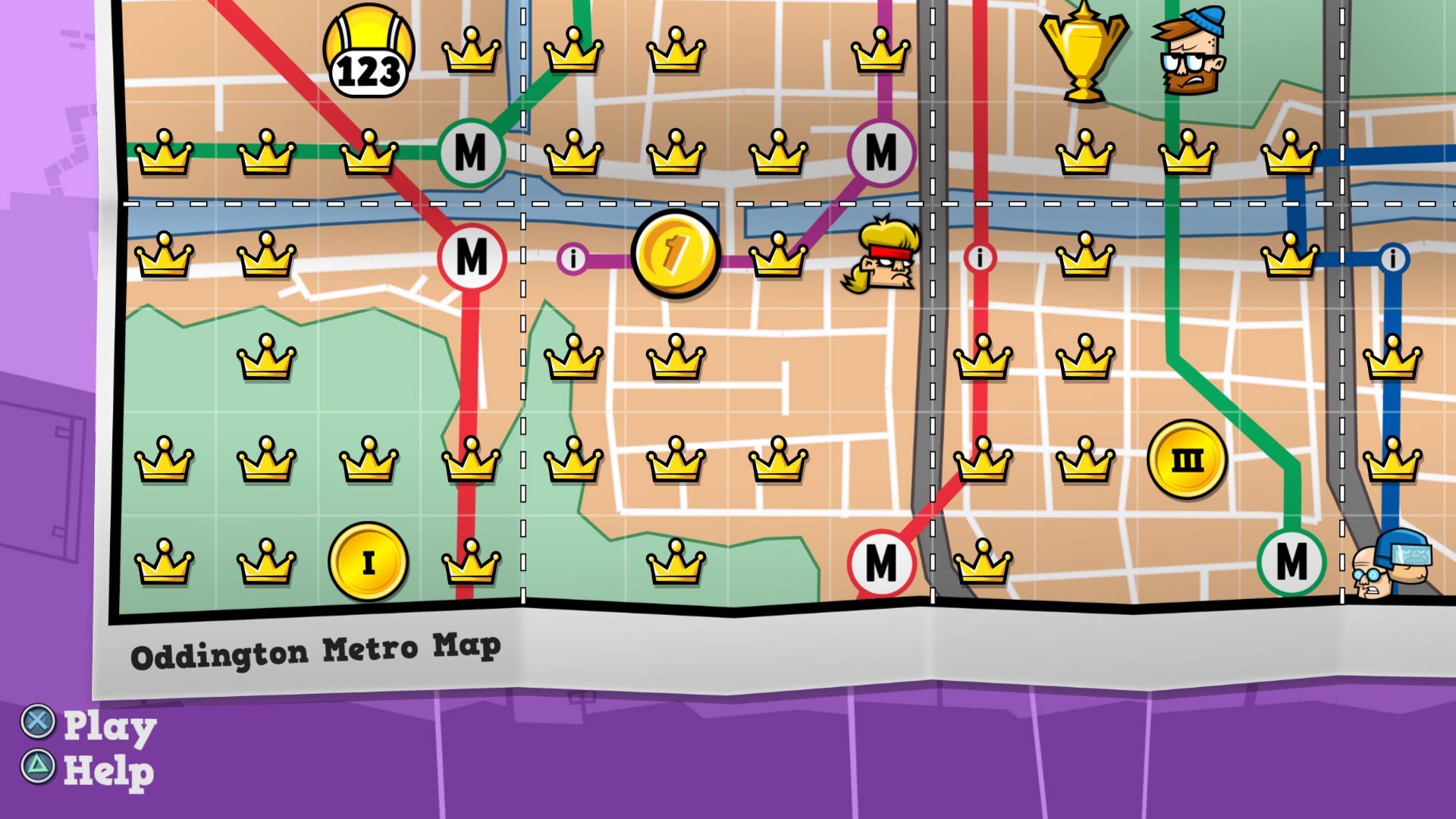 Taking a cue from King Oddball, 10tons Ltd. has Tennis in the Face as their second run at making a physics puzzle game that’s divided into different stages and relies on a limited number of attempts to meet you goal for each stage. Pete starts out on a single platform, has no ability to move, and can only serve a mean direct hit at basically any angle to try and hit all the offending people in his quest for cleansing. Sometimes they’re clowns, sometimes police officers, sometimes scientists in hazmat suits, but always they’re people who need to be hit with tennis balls. There are plenty of mechanics that get introduced right away, like falling objects, breaking glass and exploding canisters, including ones that shoot smaller tennis balls out in multiple directions. Finish with as few volleys as possible in order to get the coveted gold crown for the stage.

Conceptually and graphically, I really enjoyed Tennis in the Face. I thought the cartoonish nature worked fantastic for this satirical and frankly absurd concept, and it wouldn’t have been as fun had the people been more realistic or had the tone been darker. There’s no questions as to why everyone hangs out in construction zones and such, or why angles seem to magically exist, or why someone falling on their friend is just as effective as getting a tennis ball straight to the face. In fact, the cartoonish approach makes it even better, as King Oddball felt a little dark in some instances (since all the enemies were tanks and military). Having this just be the most over-the-top way for someone to deal with tennis related frustration makes it work that much better for me.

The physics are important to keep in mind, as the tennis serve has quite a bit of velocity to it and you can’t always judge exactly where the ball will end up going. With a limited number of serves, you’ll naturally want to try and nail as many targets as possible in a single shot, causing you to try again and again to make that perfect hit. Thankfully, Tenns in the Face benefits a ton from being on the console, as being able to reload the level is just a push of the button, and you’re still left with a ghostly trail that shows where your last hit started and ended. As a result, the dedicated player who really wants to get those golden crowns can go centimeter by centimeter until they line up the perfect shot, and then let it fly. There were several levels where I only needed to have one ball left and I had two, which makes me feel like I should have deserved a double crown or something. 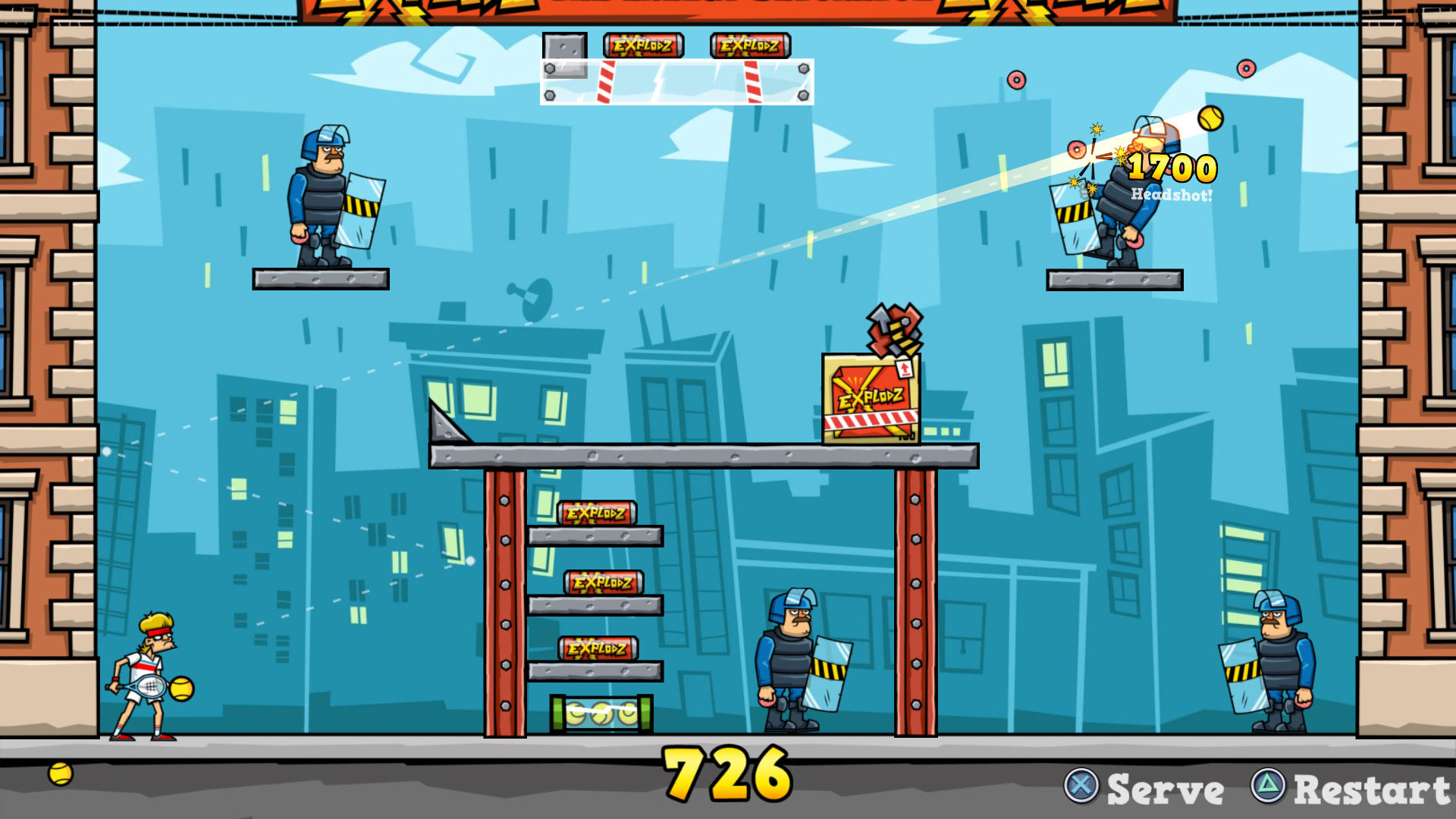 Tennis in the Face is borderline relaxing in the approach to each level, and it’s something that I really appreciated. There isn’t necessarily a difficulty curve to think of, merely a restructuring that happens every time you unlock a new area. Using the same grid-style map as King Oddball, you get to encounter words that have hipster clients or amped-up businessmen, but they all have a perchance to go down with a headshot, and you can simply try, try again until you get it right. There’s no timer or pressure cooker to get the level done fast, and the leaderboards are paltry, pithy things that barely register on most people’s meters. This is a game where you get in the tub or sit on a long bus ride and just jam out until you get to where you need to be, Turning it off and putting it down is as easy as picking it up, and that is so important for games, especially ones that can potentially be quite addicting.

If you’ve already played Angry Birds or any number of the clones out there, you already know how to handle Tennis in the Face, and you might find even more satisfaction here. With no popups to buy additional games or unlock special characters, Tennis in the Face is a fun and contained game that is perfect for whiling away time and simply enjoying yourself. It’s hilarious, it’s ridiculous, and it’s a steady lob over the net that’s the perfect setup for a smash-back spike. If you love physics puzzles and hate Big Energy Drink, you’re already the perfect audience for Tennis in the Face.