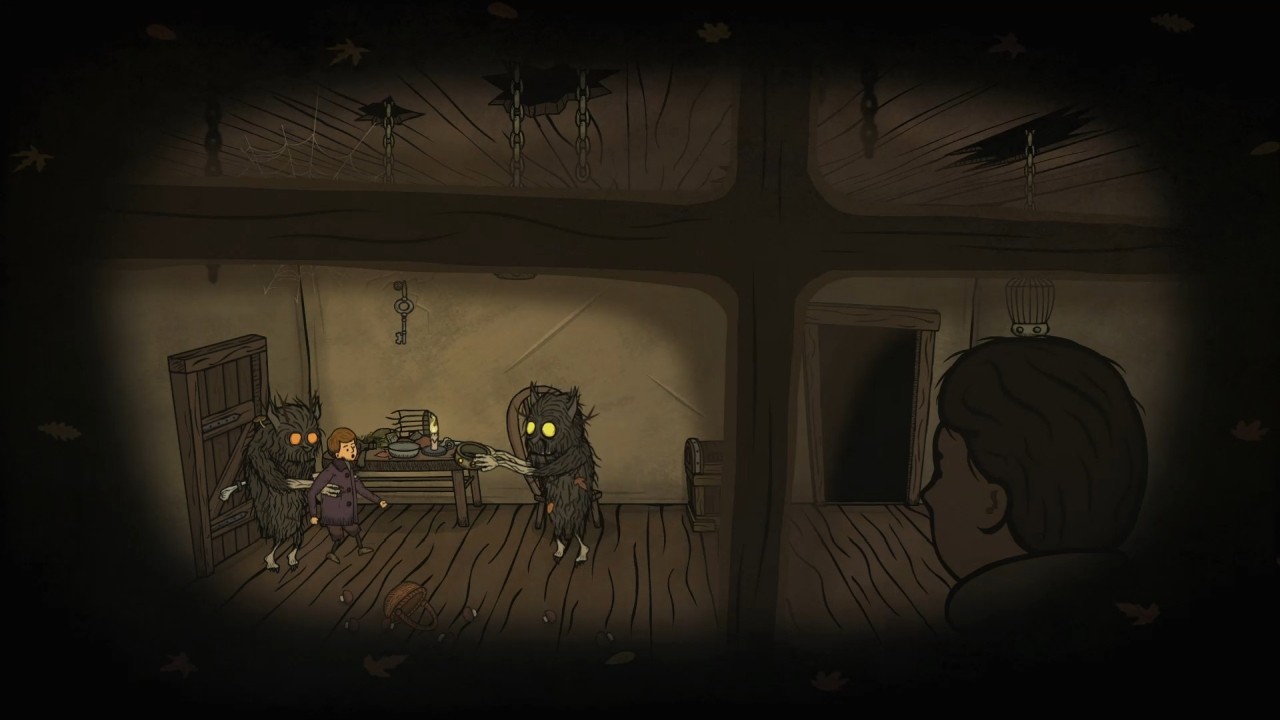 With the Switch store so full of indie puzzle games, it’s hard to know what to buy and what to try out. It’s difficult to find good, detailed puzzle games that stand out from all the shovelware. Creepy Tale is a 2D puzzle adventure that doesn’t play by ordinary puzzle rules.

You begin Creepy Tale walking through the forest with your brother, collecting mushrooms, when your brother is kidnapped by strange monsters. As you try to find and save your brother, you will encounter various challenges and creatures ranging from timid to terrifying. Creepy Tale uses the defenceless hero trope, as you cannot attack any of the creatures. Instead, you must hide and think of unusual solutions for the unusual and unsettling puzzles of Creepy Tale that accompany the fantasy-horror themes. As you go deeper into the forest and uncover its secrets, you face more and more danger as you come closer to apprehending the monsters who took your brother away.

There aren’t many puzzles in the traditional sense of the word in Creepy Tale. This title uses compressed item-finding quests in each ‘episode’ to help you solve certain issues within the worlds to progress. Ranging from using mushrooms as bait to innovative use of a fishing rod, Creepy Tale takes away the comforts of traditional puzzlers. This game not only forces you to be clever, but forces you to do so under threat of capture. Whilst being captured by the various enemy monsters in the games does little to impede progress, it can be quite a rush to have to time your puzzle solving pursuits against hiding from creatures. Whilst some puzzles were simply trial and error, I was seriously stumped at some of these small puzzles in this creepy game. 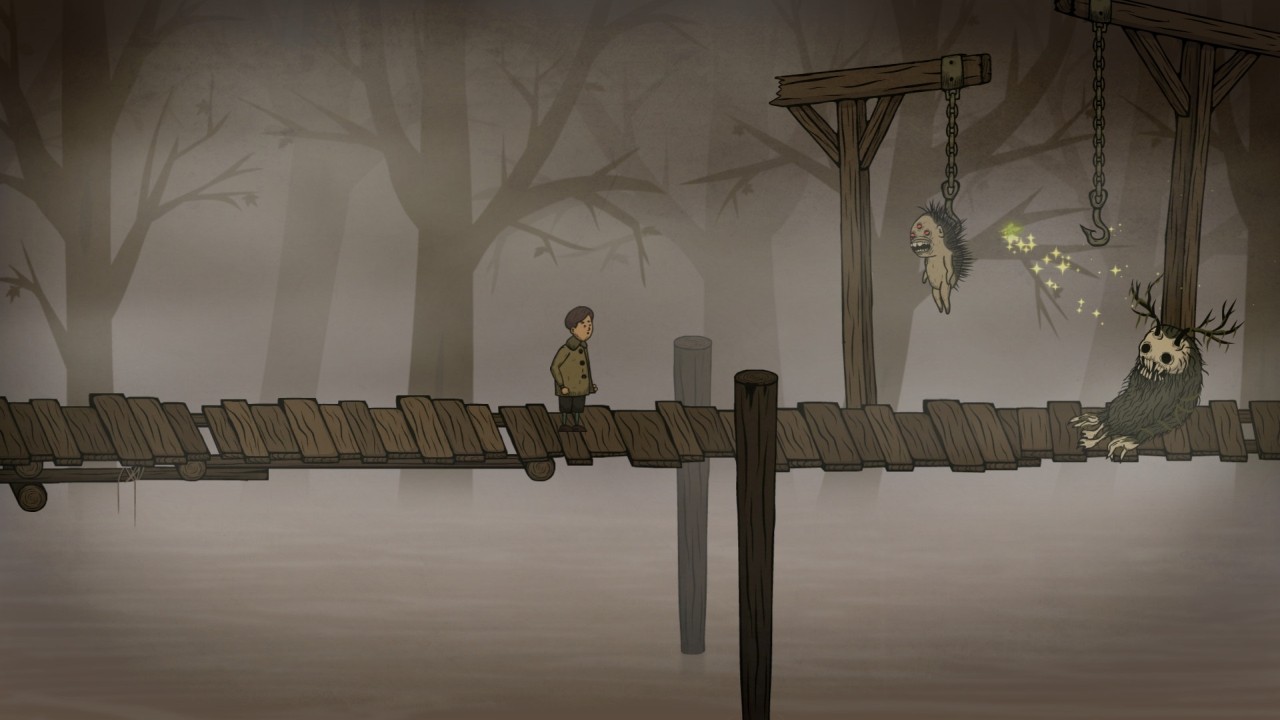 Thematically, Creepy Tale relies less on horror tropes and more on making the player feel uneasy. While this game doesn’t have jump scares and its sound effects are more annoying than frightening, the sense you are being watched pervades the title. As you walk across the 2D side-scrolling landscape, ghosts appear to watch you from behind the trees before vanishing behind the trunks again. But don’t be fooled by appearances, the ghosts and monsters in this game aren’t all malicious. Some are downright cowardly! My favourite part of the plot was definitely the Witch’s House. By far the most challenging episode of the game for me, I found myself caught by the witch countless times as I raced through the floors of her house to escape her clutches. Only eight episodes long, split into three short chapters, this game is agonisingly short of what it costs to buy. I ached as I felt myself reaching the end of the game, desperate to learn more about the world and the creatures that inhabit it. I could finish this game in just over an hour, and this only came through some of my own careless in-game mistakes during puzzles. Not only this, but Switch version of this game seems to offer hints on the setting menu that can be turned on and off. Even while replaying a couple of chapters with the hint function on, I didn’t get any help with the puzzles either written or animation clues.

Creepy Tale’s art style is interesting and has clearly had a lot of thought and care put into their design. While I enjoyed the comic book style, a lot of the areas looked similar. While the greyish tinge to all the landscapes made sense because of the horror theme, it really made a lot of the episodes look bland and not very exciting to look at. The creatures were by far the most interesting part of the design, despite looking like furry sentient raisins. Their eyes glowing different colours, due to one of the secrets of the game, was a nice touch and some good foreshadowing by the animation team. 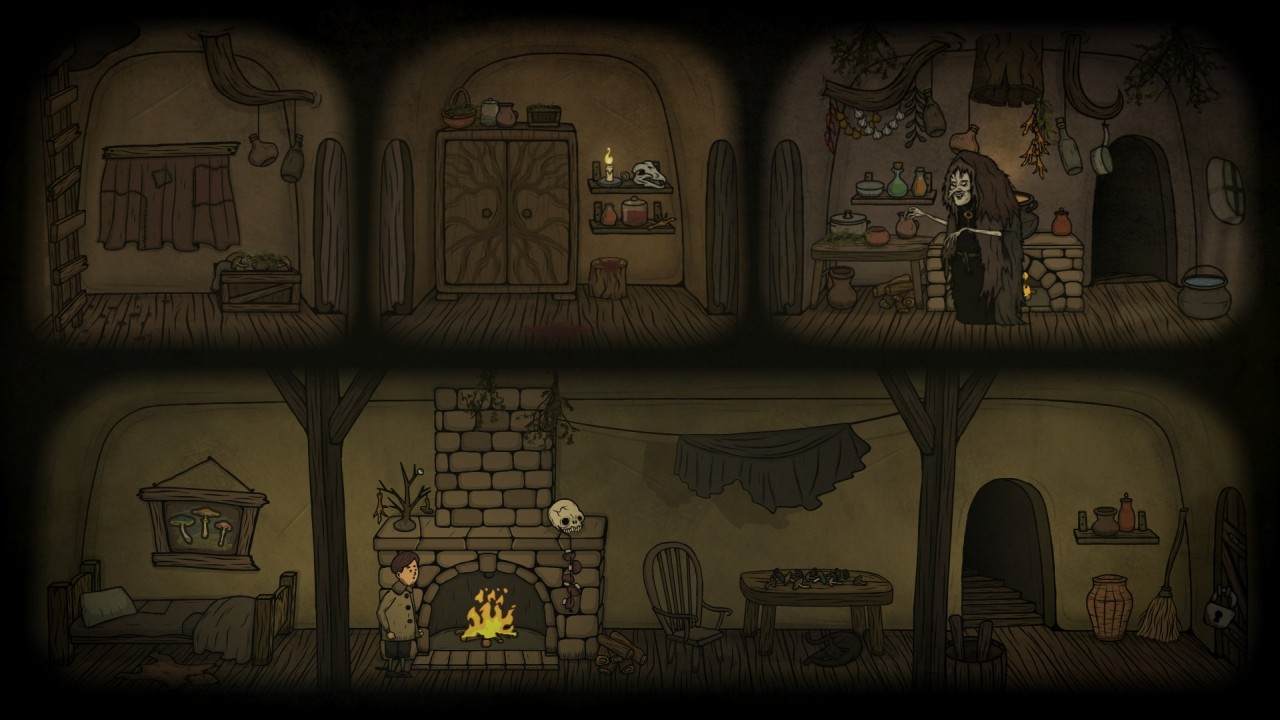 The music was fairly pleasant, although a little repetitive. While the music fit thematically, there wasn’t much variation in music across the episodes. I ended up just turning my sound off, as it became irritating after a while to listen to the same instrumental tracks on a loop. The aforementioned sound effects were well done, but not particularly scary, which opens this up to a few more audiences. Overall, I was disappointed by the soundtrack as the game’s description hyped up a ‘surreal audio design’ which fell flat upon delivery.

Creepy Tale reminded me of Naughty Eleves and Tiny Bang Story, a little of its gameplay style and the 2D art style. While the themes of Creepy Tale embroiling children into unsettling chaos were definitely reminiscent of the likes of Little Nightmares and The Counter Lucanor. While I enjoyed playing this title, I wanted more puzzles and longer puzzles. Overall, this game is short and sweet but leaves you wanting more for the actual cost of the game in the e-store. The steam version included collectable achievement which increased replay value, but these are unfortunately absent in the Switch copy. I would like to see a sequel, if only to revisit the world of Creepy Tale, but I hope it has far more content, and an updated soundtrack.

Will you help save your brother from these strange monsters? Creepy Tale offers a short, unsettling experience that will leave you questioning who the real monsters are.